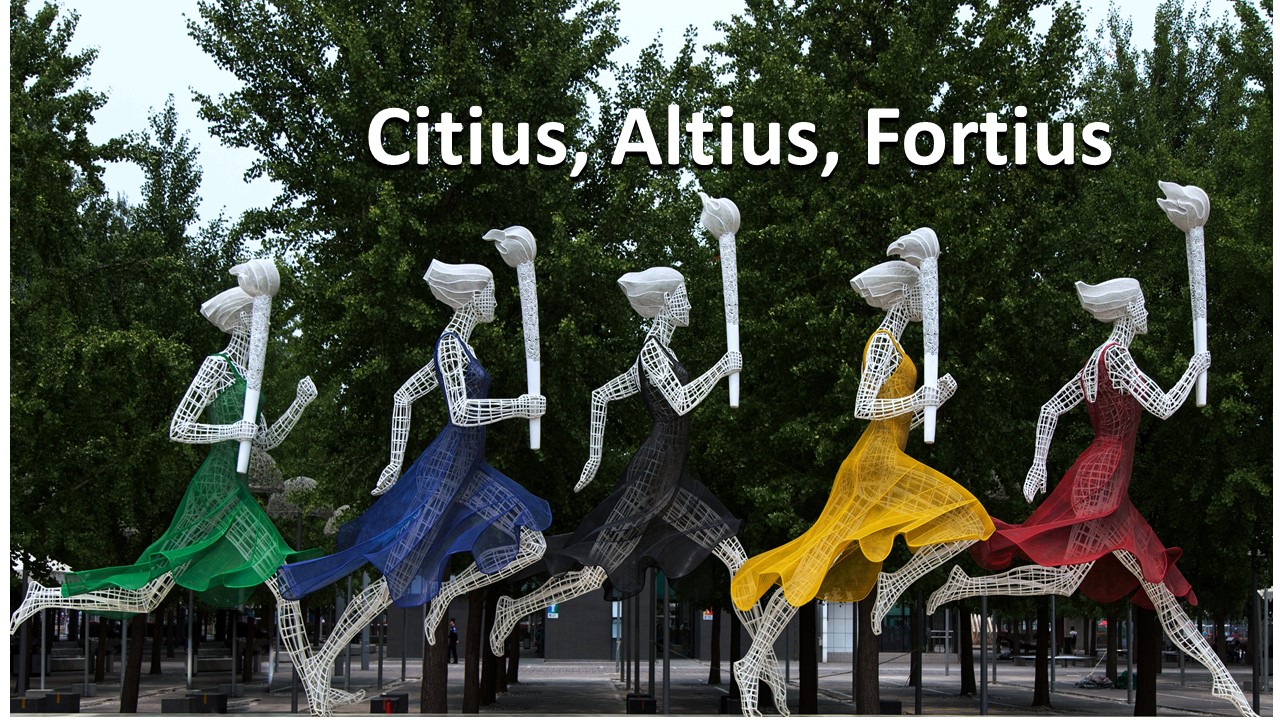 Today 8 of August sees the end of “the Greatest Show on Earth”, a show that visits us every four years. True to its motto, “Citius, Altius, Fortius” – “Faster, Higher, Stronger”, the Olympics bring forth spectacular performances. There were sublime achievements, affirming that humans are capable of superlative deeds when they set their minds to them.

Amid the flurry of congratulatory celebrations for the winners, it is good for us to remember the words of Pierre de Coubertin, founder of the modern Olympic Games:

Pierre de Coubertin was such an idealist; however, he must be spinning in his grave, given the antic of at least one athlete. Ironically it took the representative of a country that prides itself as being the proponent of the noble value of sportsmanship to put the boot into Coubertin’ noble idea. Why? This country even invented the term “I say, that’s not cricket” as a reproach of unbecoming sporting behaviour.

A British boxer, Ben Whittaker, literally told Pierre de Coubertin to stuff it as he was so upset with winning just a silver medal (sic) at the Tokyo Olympics that he refused to wear the medal around his neck. He just stuffed it in his pocket as he stood petulantly on the podium.

When asked about why he chose to snub his prize, Whittaker said, “You don’t win silver. You lose gold. I’m very disappointed. I feel like a failure.” Actually, that young man lost not just the gold medal. He also lost his dignity. I can imagine my school principal of yesteryears, a stiff-upper-lipped Englishman if ever there was one, would exclaim, “Tsk, tsk tsk. I say, old chap, that’s not cricket”.

Amazingly the boxer was praised by Piers Morgan, a famous British journalist, and television personality. The British broadcaster commended Whittaker for his courage to “tell the truth about competing in elite sport”. The truth is that Whittaker could not care two hoots about the country which name was emblazoned prominently on his jersey. He only cares about himself and his ego. Wait a minute, is he not sponsored and financed by British taxpayers?

Wow! How far has the apple fallen from the tree. I remember in my days in boarding school in Britain we were constantly being reminded to be a gentleman and be a good sport. We were told to take to heart the ethos of Rudyard Kipling, as expressed in his poem “If” and one line in particular – “If you can dream—and not make dreams your master”.

Ben Whittaker was the slave to his dream – to win the gold medal. Anything else to him is just plain unadulterated failure. He is in good company in this dismal behaviour. Just last month the English Football team played in the final of the UEFA Euro Cup. They were so gung-ho that they entered the field with the chant “It is coming home” thundering around. This smacked of arrogance, alluding to the idea that the true home of the Cup should be England, never mind the fact that the last time England won any international accolade was 54 years ago. Well, their opponents, Italy spoilt the mood and took away the Cup to Rome. The footballers too refused to wear the runners-up medals around their necks. “Stuffed them in their pockets, they did” as Jedi Master Yoda with his quant sentence structure would say.

So, no gold medal, no dignity, and no class. Period.

I know we Malaysians have been deriding ourselves for some time. Mockingly calling ourselves “Malaysia Boleh”. But this time around we display oodles of class. Though our Olympic contingent was not in the medals, apart from the bronze in men’s badminton doubles, Malaysians by and large are fulsome in their praise of the efforts of our athletes.

Our Sarawak diving queen, Pandelela, fought her way into the finals of twelve top divers of the world, the best of the best led by the two teenage diving phenoms from China. Pandelela finished 12th in this elite field. Still, Malaysians offered congratulations, empathy, and appreciation. Yes, we have class. We all can shout, ‘Malaysia Boleh” with pride.

I am sure many of you have heard of the Chinese legend ‘Journey to the West’; in Chinese, it is called ‘Xi Yu Chi’. This is the story of a monk by the name of Tang Cheng who went on a pilgrimage to the birthplace of Buddha in India. He was accompanied by three immortals. One of them was the monkey god, Sun Wu Kong.

The journey from China to India was an arduous one. They had to cross treacherous rivers, climb high mountains, and confront man-eating monsters. After years of enduring such hardship, Sun Wu Kong was fed up. So, he pleaded with his master, Tang Cheng, “Master, why don’t you just climb on my back, and I will transport you to your destination in a blink of an eye.”

The monkey god, Sun Wu Kong, was a super god. He could ride the clouds, cover 10,000 leagues in one step and reach the ends of heaven in 72 somersaults.

“Dear Monkey,” said the Master “I am disappointed with you. After all these years with me, and after studying all the scriptures, you still do not grasp the point. The journey is the mission. The mission is the journey. It is the journey, not the reaching of the destination that will transform you into the enlightened one.”

That then is the crux of the matter — the real prize in any competition is not the championship trophy. In time, trophies will just gather dust on the shelf and the euphoric glow of the public acclaim will fade. But the brave souls who dare to take the arduous journey, to risk their hearts broken and their egos bruised will be transformed. They will have bested their greatest challengers, their old selves, and emerged as winners.

Pierre de Coubertin, we salute you. Let all of us, spectators and athletes alike, emerge from this Games, quick to appreciate, higher in aspiration, stronger in empathy – in other words, better human beings.

Previous ArticleHave we got the fragrant Stephanotis blooming?
Next Article Extraordinary times call for extraordinary measures