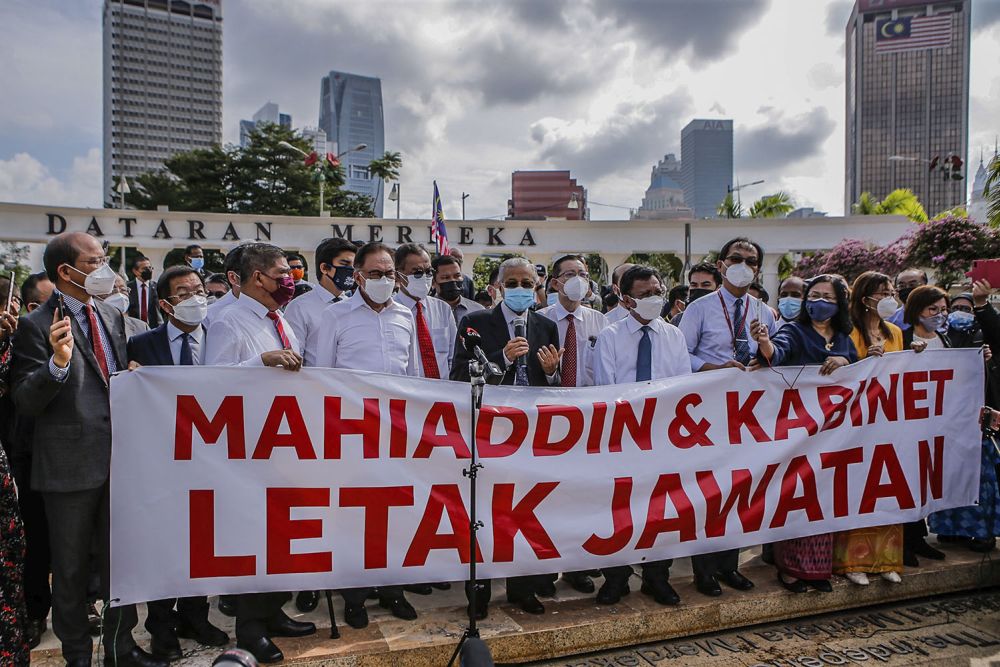 KUALA LUMPUR (Aug 13): Many Opposition MPs have rejected outright Tan Sri Muhyiddin Yassin’s bipartisan cooperation offer, lamenting that the prime minister is only reaching out to them now, because his majority support in Parliament is in doubt.

Among the many who took to social media was Pejuang’s Jerlun MP and former Kedah mentri besar Datuk Seri Mukhriz Mahathir.

“Where in the #federalconstitution does it say that a PM who has lost majority cannot resign until another MP with majority is identified? 43(4) states a PM who ceases to have the confidence of majority of MPs shall tender the resignation of the Cabinet.

“Did Mahiaddin just gaslight us just now? Did I hear him offer us a bribe to support him & his minority govt? Did he offer to stay on as PM and will remain incumbent PM when GE15 happens in July’22? Are we stupid or what?” Mukhriz tweeted.

On Muhyiddin’s announcement greenlighting Undi18, the law allowing those aged 18 to 20 to become voters, Mukhriz gave a reminder that the Bill had already received overwhelming support in Parliament, and should have already been executed.

He also scoffed at Muhyiddin’s commitment to formulate an anti-party hopping law, claiming that the Perikatan Nasional (PN) government is a product of such a practice.

Mukhriz lamented that Muhyiddin’s announcement on the absence of another MP who can likely be made prime minister “sounds like he’s denying YDP Agong’s right to appoint as PM an MP who in his judgment is likely to command the confidence of majority of MPs.”

The former youth and sports minister also called on Muhyiddin to relinquish his position with dignity.

“The reality is, the announcement made today was because you have lost power and lost support. Your ministers have resigned. Component party has rejected your leadership. With every second wasted by the prime minister who is stubborn to hold on to power, it is the people who would bear the suffering,” he said.

Syed Saddiq also questioned the PN government’s rejection of Muda from being formally registered as a political party.

“The prime minister forgot that it was this prime minister’s government which blocked Undi18 from being executed in July 2021? Postponed and postponed until the end of 2022. Suddenly today, also announcing that Undi18 can be executed immediately. Don’t announce this and that according to your whims if the intention is just to stay in power,” he added.

“So now ‘No DAP’ is no more relevant?

“Don’t anyone use the NO DAP excuse, while the PN government has already offered to all openly,” he tweeted.

His fellow party member Bandar Kuching MP Dr Kelvin Yii said that Muhyiddin must take responsibility for “his failures in the vote”.

“I in good conscience cannot condone an open “scheme of things” on live TV nor condone failures and hypocrisy. We need to send a msg & he needs to takes responsibility for his failures in the vote. Then, we nego such reforms wv the upcoming PM/gov who need to reset in approach,” he tweeted.

Dr Yii said that he simply cannot allow failures in leadership to continue, despite the “candies” offered.

“My biggest problem with Perikatan Nasional is the incompetency of their Cabinet Ministers that has led Malaysia to where we are today. Today’s speech does not address that incompetency and changes nothing in helping Malaysia out of the current mess,” she tweeted.

“PM @MuhyiddinYassin has proposed a way fwd with a number of institutional reforms that could leave a lasting impact on Msian politics if passed. I think that all political parties should sit down to discuss if these terms are acceptable or not, no?” he tweeted.

Muhyiddin today expressed his willingness to work with parties outside of PN following a scheduled vote of confidence in Parliament.

In a special address today, Muhyiddin said after the confidence vote is done, there will be a more stable and inclusive government that recognises bipartisan input in managing the pandemic. – MalayMail