Saturday, October 23
You are at:Home»Features»Of ‘white flags’ and food banks in Miri 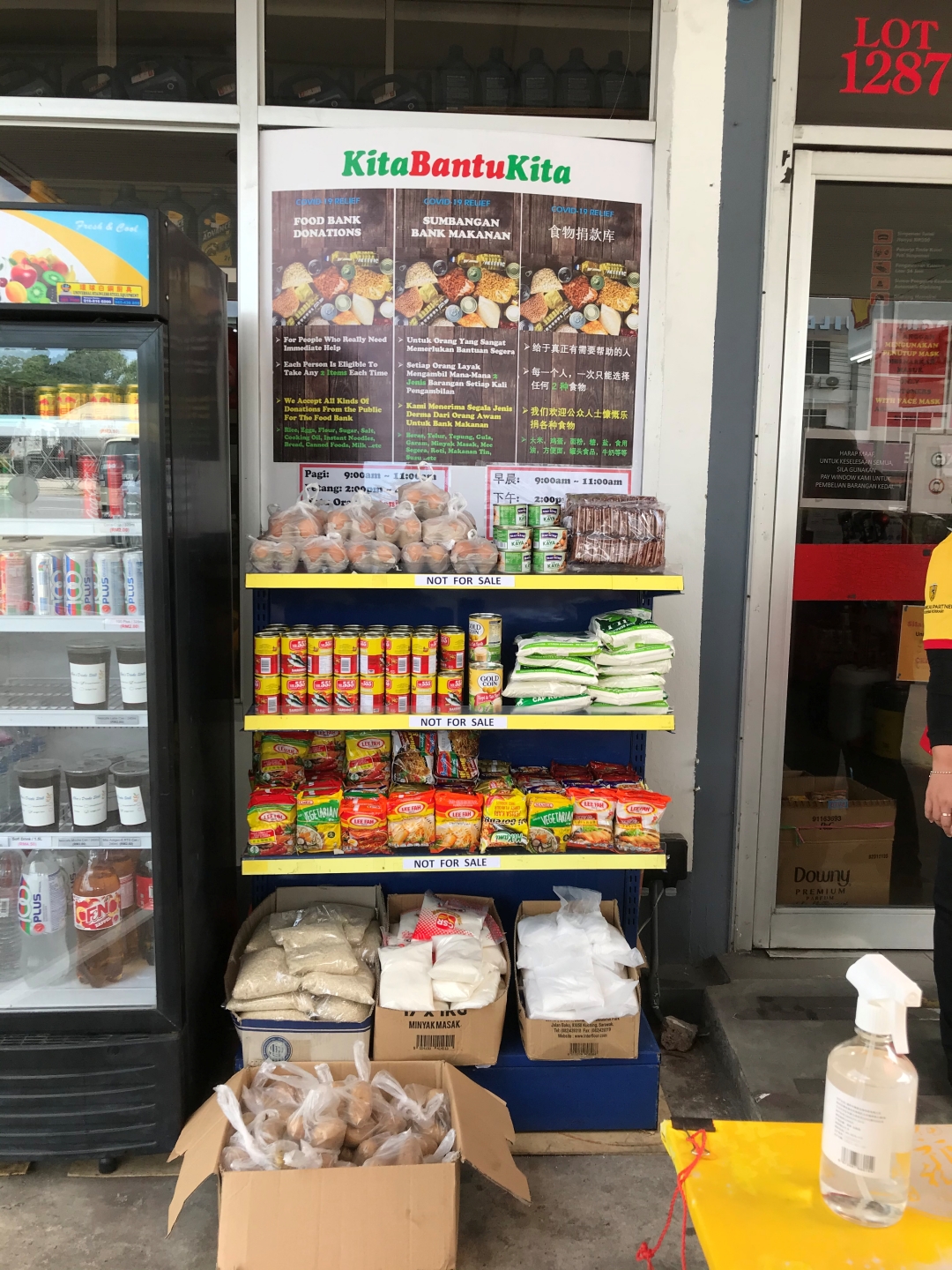 The Kit Siang Sungai Baong Shell station near Miri attracts many ‘kampung’ folk who are in genuine need of food assistance.

Lockdowns have a way of unveiling kindness, generosity and humanity among Mirians who would go all out to help their less-fortunate neighbours

THE ‘White Flag’ movement is said to have started in Peninsular Malaysia where some ‘kampung’ (village) people, out of desperation due to the hardship faced during the prolonged implementation of the Movement Control Order (MCO), put up white flags or cloths at their houses to indicate their plea for help.

As with the idiom, the white flag signified their ‘surrender’ to the difficult situation brought about by Covid-19, where they had no food due to the strict lockdown imposed on their neighbourhoods.

Those who saw the white flags at their neighbours’ responded immediately, and from there, the movement grew into involving more people.

It was very heart-warming to see so many individuals coming out of their ‘stay home, stay safe’ mode to organise and arrange for food donations to be delivered to those in need.

The politicians, with larger resources and better connections, immediately got their supporters to buy truck-loads of essential items meant for mass distribution later on.

Since the ancient days, men and women have been giving alms to help the needy folk. Almsgiving is considered ‘an act of virtue, either materially or in the sense of providing capabilities (e.g. education) for free’.

Throughout almost two years of MCO, it is encouraging to see how many people have responded positively to the cries for help, represented by the white flags being raised in Miri.

There is no denying that there have been flag-raisers whose intentions are doubtful, but their numbers are overwhelmed by the genuine cases, which really do require help.

Even more encouraging is the high number of Good Samaritans who continue to help the needy folk – whether or not they have raised the white flags. 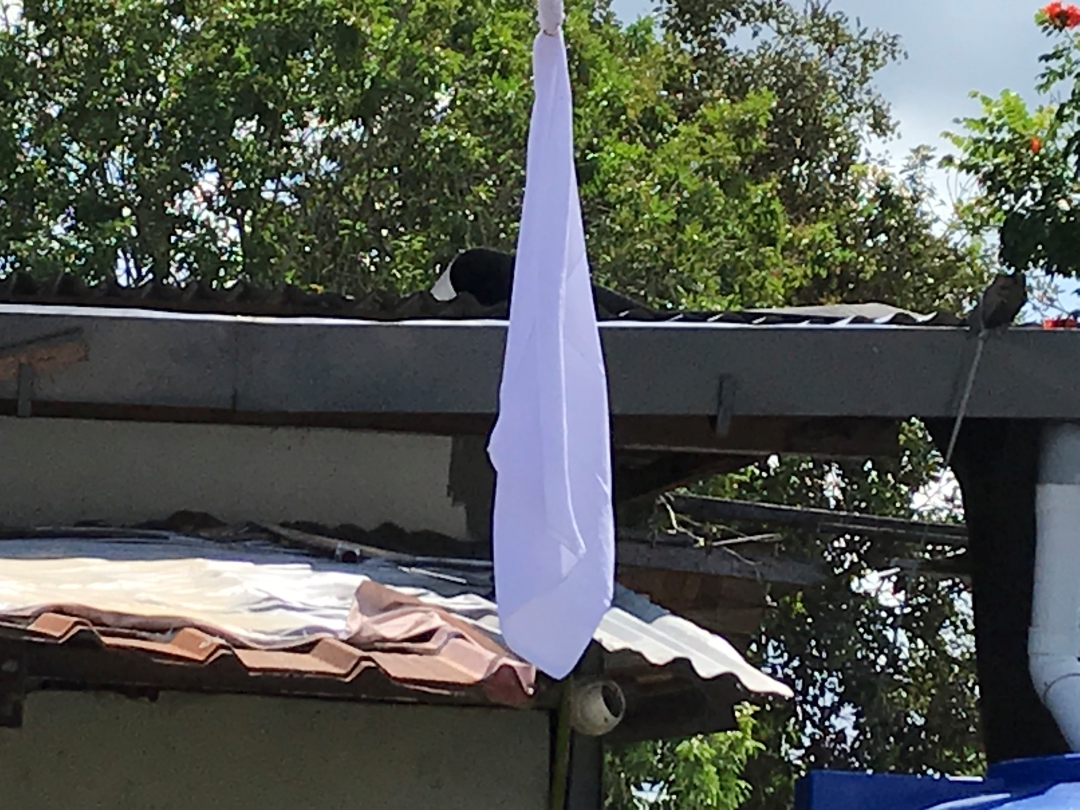 A ‘White Flag’ is spotted at a unit in a poor housing area in Miri.

The food bank idea is not new. Twelve years ago, Pierce Wong of Kuching initiated a free food movement (FFM).

“It’s bad to prepare all the packed food in bulk, as each packed item has a shelf life of 30 minutes. So if you are preparing 100 packs of food, by the time you have finished packing the last one, the first one has already gone past its shelf life.

“Secondly, the alms are meant for those facing hardship, not for the cheapskates.

“If you have not gone hungry for one whole day, with no food in sight at home, why would you degrade yourself to the state of being a vagabond, going out and taking the food meant for those in hunger?”

Wong also described many charities running FFMs as ‘copycats – those wanting publicity’. “Such political charade is so unnecessary.”

At times, such well-meaning initiative could display a rather unpleasant outcome.

When the food banks appeared in Miri quite recently, the resulting long queues drew a great deal of interest — it looked like a picnic, despite it having no intention of being one. 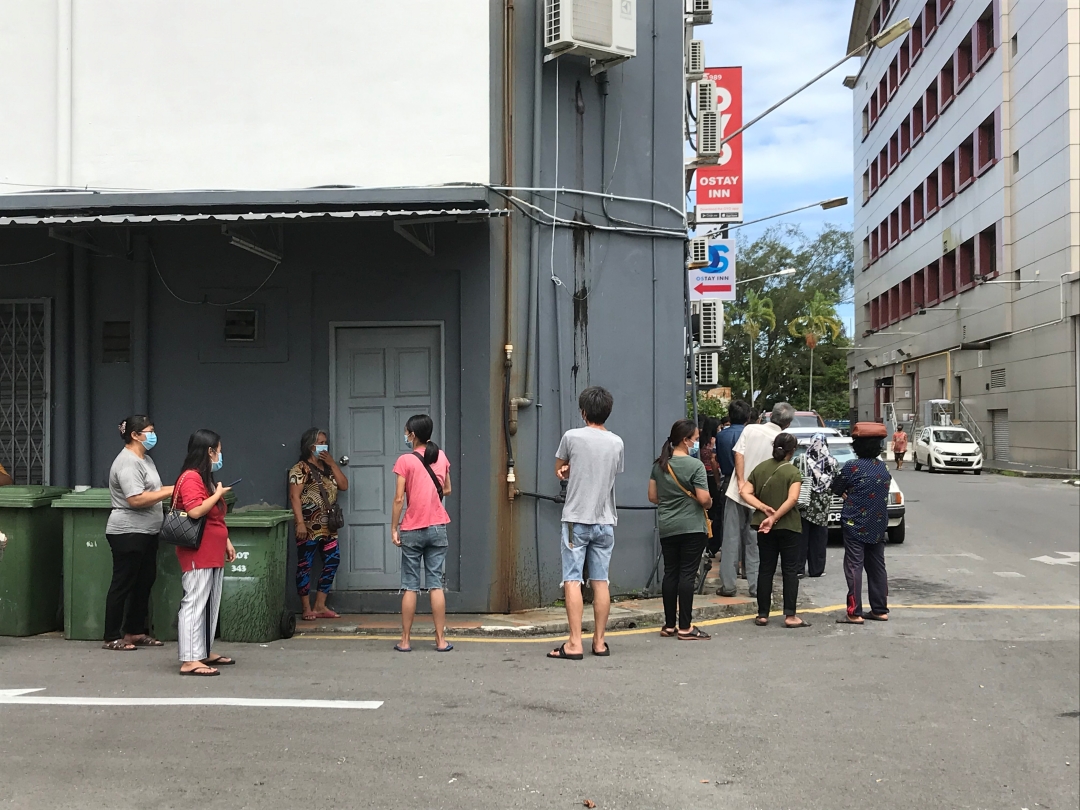 There is a very long queue of people at a large food bank in Miri.

Then there were a few political charades involving the bigger food banks.

There, the needy supporters would come to receive the food items, comprising a big bag of rice and two items of their choice (such as a loaf of bread and a bag of sugar).

They could also opt for a box of chicken rice instead of a loaf of bread. It is said that the aid recipient must register their names first.

Some parties even conducted small ceremonies in malls, when food baskets were given away for publicity sake.

The smaller food banks, usually organised by just one individual or just a small group of well-wishers, seem to be more genuine and to the point.

The Kit Siang Sungai Baong Shell station near Miri, for example, attracts many ‘kampung’ folk who are in genuine need of food assistance. 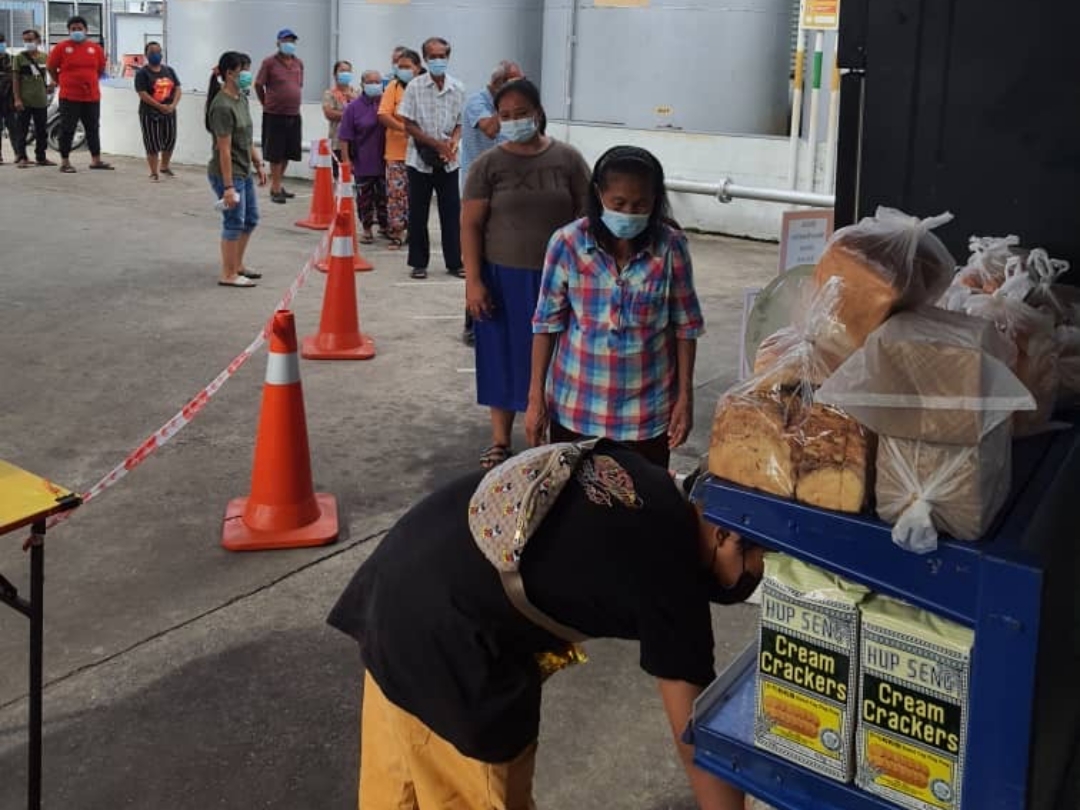 The needy folk queue their way up for the essential items at Kit Siang Sungai Baong Shell station near Miri.

“By appearance alone, one could tell if a person is in genuine need of help or not,” said fuel station staff member Alvin Lau, who helped the setting-up of the station’s mini food bank.

“People are welcome to come and take two items of their choice – a bag of potatoes and a bag of cooking oil, for example.

“Eggs are very popular. Biscuits are usually taken by small children who accompany their grandmothers.

“I really feel for them.

“These are the genuine needy people who walk quite a distance away from the nearby ‘kampungs’, just to get the food aid.

“Every morning, we stock up the shelves and throughout the day, we would refill them four to five times. We are ever-ready to serve the needy people.” 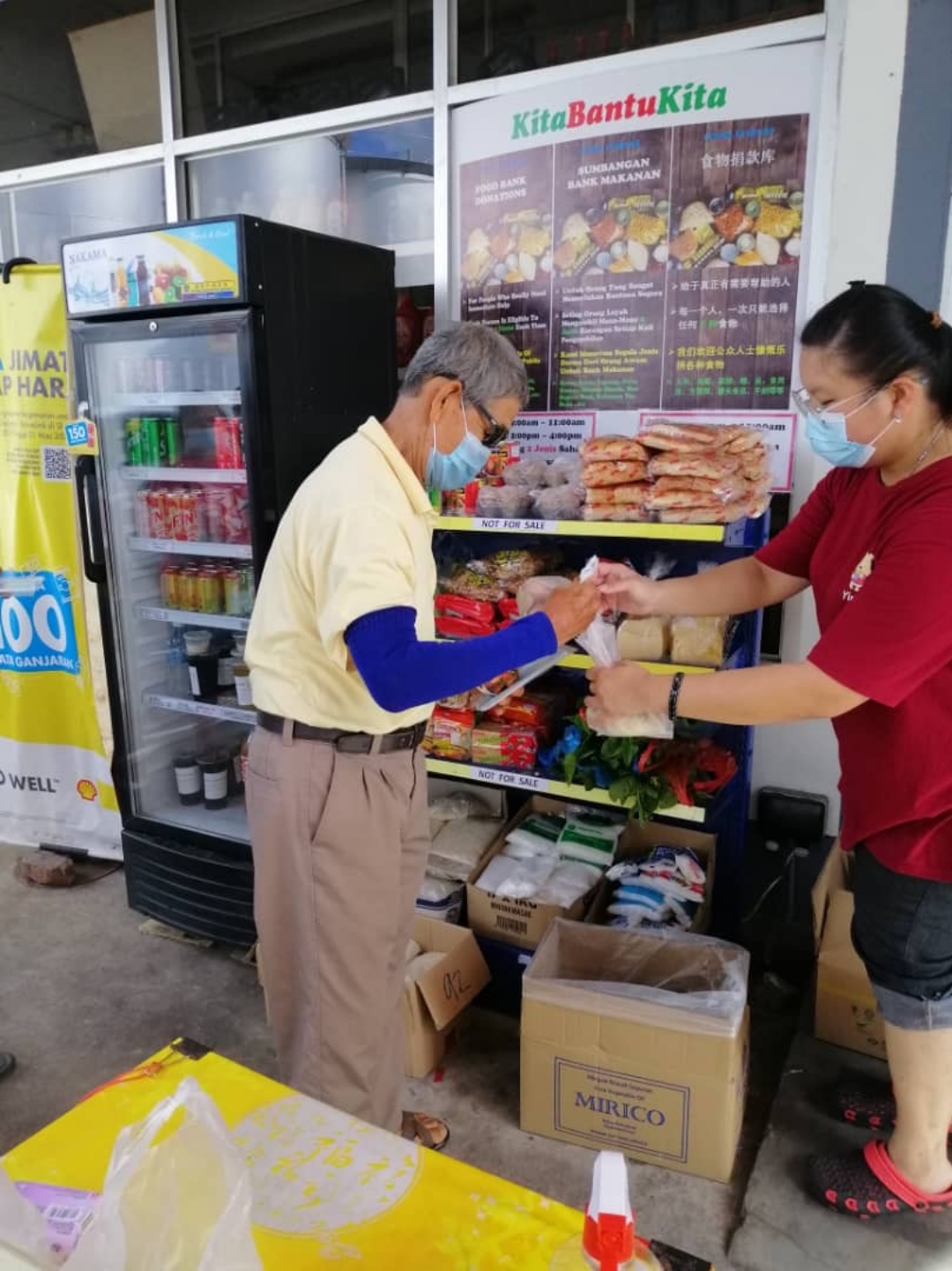 An elderly man receives essential supplies from one of Lau’s co-workers at the fuel station.

Lau said the well-wishers, whom he communicated with via WhatsApp, would pay directly to the suppliers, who would then send the foodstuff to the station.

“This is to ensure that we receive the supplies directly from the suppliers; that we don’t collect or handle the money.

“The station staff members also don’t need to go out and buy anything. We just help place the food items on the shelves and distribute.

“We are thankful to all our friends who have been donating so willingly and generously.

“Furthermore, those in our WhatsApp group would also tell their friends what we need and so far, the response has been really great.”

Politicians have been given allocations, since the Covid-19 struck early last year, to provide for the needy folk whose livelihood has been adversely impacted by the pandemic.

Food supplies from several politicians have been sent door to door by their supporters in areas such as those in Holiday Park and Bakam.

A grateful recipient from Holiday Park, Jennie Chan who is a retired teacher, remarked: “It was good that we were given a bag of rice, sugar, flour and cans of sardines. I received a bag of cooking oil too. The rice could last my husband and I for more than a month. It was the first time that we received this food basket – as what they called it.”

In Kuala Bakam, fisherman Mohammad Rahman was grateful for the food aid channelled by by the ‘YB’ (elected representative) of his constituency.

“Just like last year, my family has received food basket again this year.

“This really helps, especially during the rainy season when we cannot go out to sea. It shows that our YB cares for us a lot.”

An operator said she had given away 600 packs of ‘Nasi Campor’ every day over the past two months.

“The needy folk could come to my shop and take as many meal-packs as they liked.

“My contacts also helped deliver the food. My team and I prepared the food, where I did the packing – so with minimal help during the MCO, we could still serve the needy people,” she said, requesting anonymity.

She also regarded almsgiving as ‘a virtue that we, the Buddhists, have been practising since the ancient days’.

In many predominantly-Buddhist countries, monks would go around carrying bowls, into which the faithful would give away donations of many kinds – every day, she said.

“My husband and I did this for two months this year. We must help the needy folk.

“It is a common sight in Thailand and Tibet to see Buddhist monks going around with their bowls. Almsgiving is the respect given by a lay Buddhist to a Buddhist monk, nun, spiritually-developed person or another sentient being.

“What we do is spiritual.”

On the ‘White Flag’ movement, the coffeeshop operator believed that at first, it shocked many people in Miri.

“People suddenly had to face a reality that there were people who were helpless and had nothing to eat.

“There are many needy people out there – some need food, some need jobs so that they can put food on the table. The Covid-19 pandemic has caused too many problems,” she lamented.

Food delivery – What a relief!

Peter Hii and his friends have been delivering food to the needy groups in and around Miri. They would go do this on board a shared vehicle, and sometimes, with another couple of friends in another car.

According to Hii, he and his friends would receive addresses of people who are in dire need of basic food items. 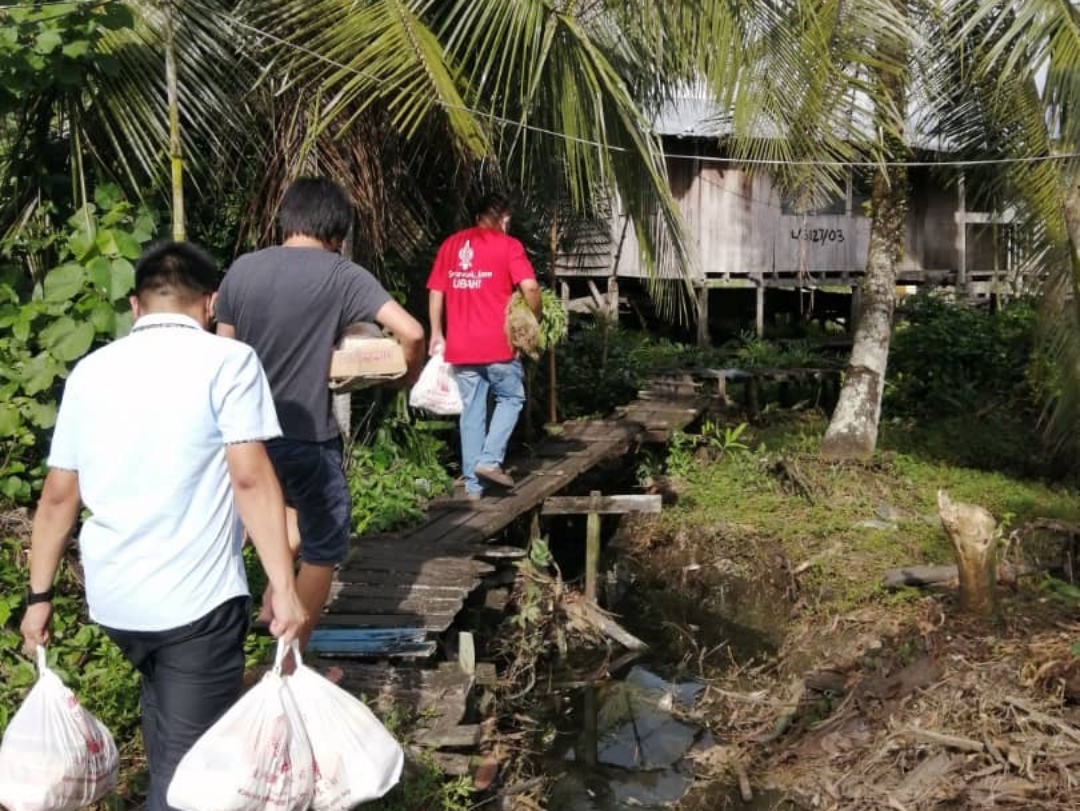 The volunteers, led by Hii, deliver food to a village in Pujut.

“We just responded – sending over rice, sugar, coffee or biscuits that had been sponsored and were meant for the needy households.

“The recipients recommended by our friends are very genuine. Some of them are bedridden patients, and a few have been left jobless.

“So far, we have distributed more than 1,000 donations of essential foodstuff.

“The recipients are the poor people who have no transport to go to the food banks in the city.

“Upon walking cautiously along the plank walkways leading to their houses, we already know how poor they are.”

Fellow deliverer, who wanted to be identified only as ‘Jason’, added: “We also buy handphones for the school-going children if they do not have any computer at home.

“Many poor children whom we have met so far have not been attending online classes.

“It’s so sad to think about these children being left behind in education, when they’re already coming from very poor families. It’s pitiful, really.” 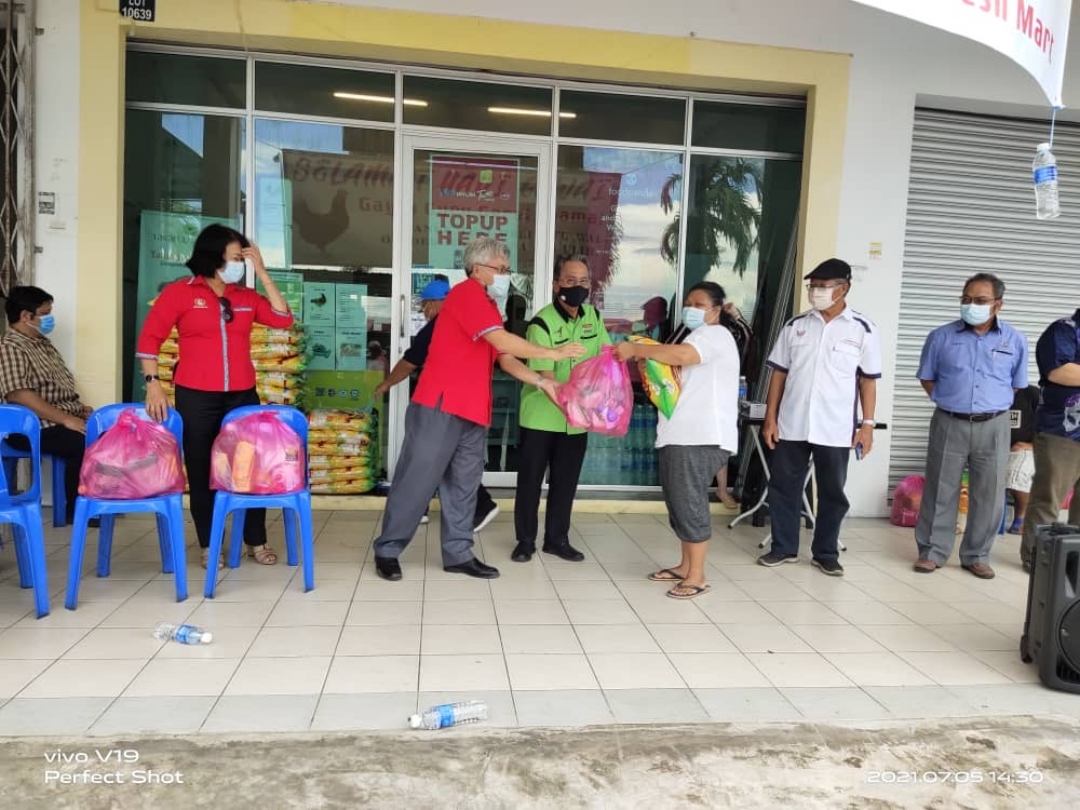 DAM members give away food baskets to the needy residents in Permyjaya.

“We have a list of people, whose names have been suggested by a number of concerned individuals.”

Fellow advisor Senator Dr Nuing Jeluing said the food baskets were given away under the present recovery package, meant to ease the people’s burden and hardship during this time of the pandemic.

“The majority of associations already have their own lists of needy people whom they have been helping every year.

“So during the pandemic, they (associations) are stepping up their efforts to help others,” he added.