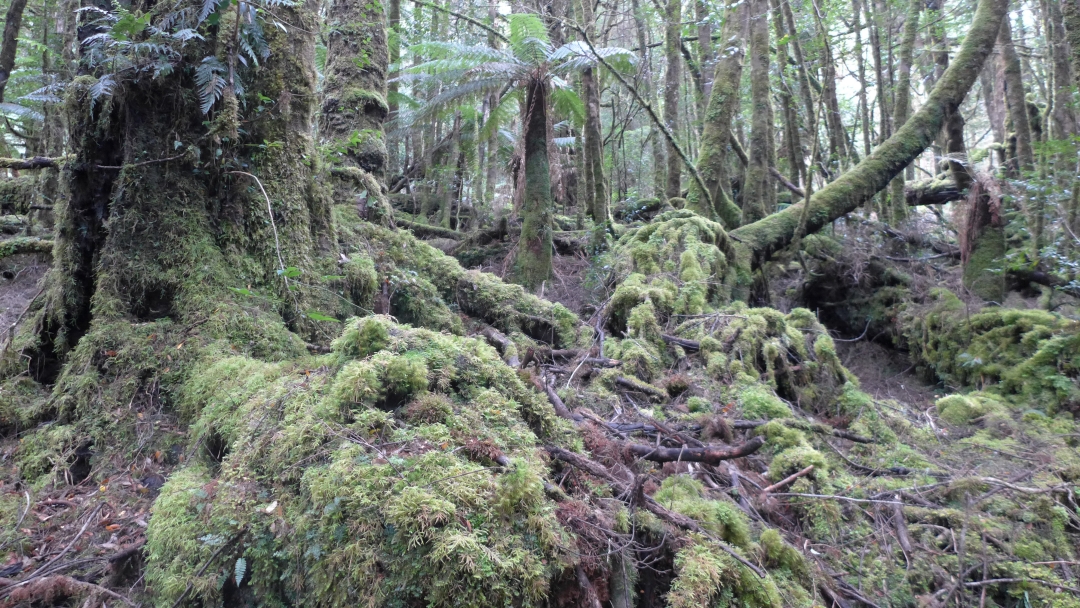 MENTION the word ‘rainforest’ and to most of us, it conjures up a vision of tropical and equatorial climates and is more associated with the Amazon Basin, Borneo and Indonesia.

Having trekked several times deep into the rainforests of Borneo, I still have striking memories of the variety and vast height of trees, climbing figs, lianas, buttress roots, the size of the trees’ canopies and the abundance of wildlife.

Much debate has gone on and still abounds over the gradual decline of the rainforests through human intervention in order develop ‘new’ agricultural practices and in particular, plantations.

Distribution of the world’s temperate rainforests

In the northern hemisphere, in the Americas, they are found on western coastal locations such as a narrow strip from northern California to southern Alaska with an outlier in the Rocky Mountains and in the eastern seaboard in Newfoundland. Pockets of such forests are found in Britain and in Norway, on the eastern side of the Black Sea and in northeast China and Japan. In the southern hemisphere, they are located in Chile, southernmost South Africa, Queensland and Tasmania in Australia, and on both North and South Islands of New Zealand. 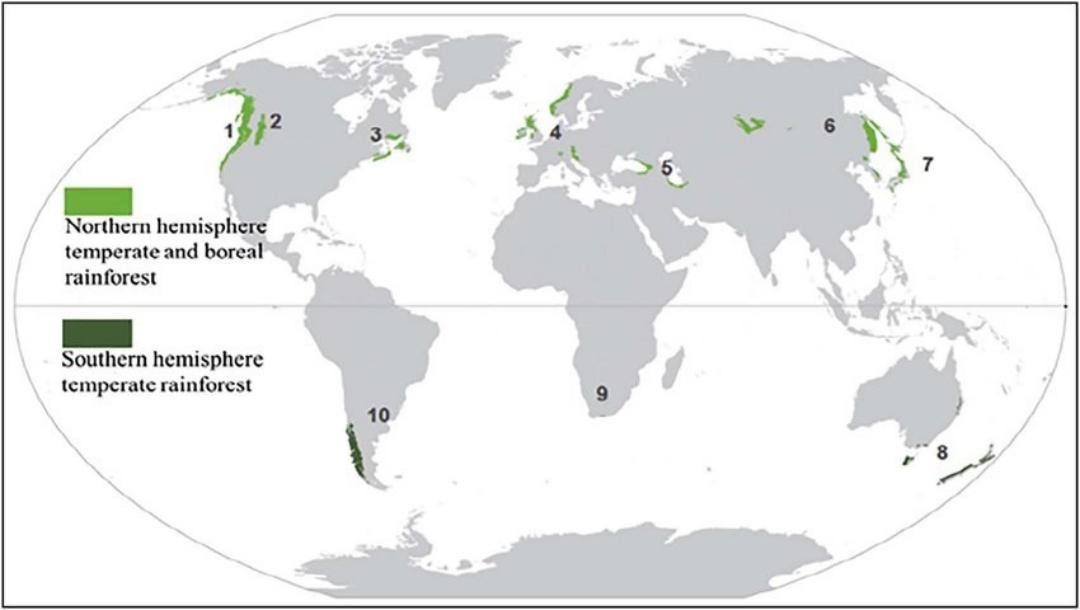 The world’s distribution of temperate rainforests.

What is so special about these rainforest?

Their locations are for the most part found in areas receiving heavy rainfall associated with an oceanic climate. They are very damp woodlands, so damp that epiphytes abound growing on the trees. Such epiphytes are lichens, mosses, and polypody ferns, which bestow the trunks and branches of the trees with subsidiary growth.

The ‘lost’ rainforests of Britain

British temperate rainforests are recent discoveries, formerly called by the names of ‘Atlantic oakwoods’ along the Atlantic seaboard, or ‘scrub oak’ for such woodland possesses small, shrub-like forms mostly of oak. These pockets of woodland have been left alone by man for the stunted growth of the trees was only fit for fuel and charcoal burning. By comparison the lowland oak forests were mostly cleared for shipbuilding and house timbers and, as previously mentioned, for agriculture.

Today, these forests are found in southwestern England on Dartmoor, Exmoor and Bodmin Moor, in the Lake District of Cumbria, the Yorkshire Dales, the Forest of Bowland in Lancashire and in the Western Isles and Atlantic seaboard of Scotland. There are small pockets to be found in pretty inaccessible deep valleys. Such moist microclimate locations support the abundant growth of epiphytes.

I first came across this small copse of scrub oakland as a 16-year-old on a school’s Geography fieldtrip. It has been the subject of poetic inspiration and even romantic fantasies connecting this ancient scrubland to Druid rituals. The main feature of these oaks, which captured my interest, was their extremely gnarled and dwarf growth and the way they branched at the level of the granite boulders from which they sprung. Found at an altitude of between 366m to 427m above sea level, the granite boulders from beneath the oak trees grow are referred to locally as ‘clitter’.

These boulders of granite were fractured from ‘Black Tor’ during periglacial times and sludged downslope as the ice melted. The shape of the branches of these trees is attributed to ‘wind-pruning’, as this area is subjected to south-westerly winds that prevail in winter; thus, checking the growth of twigs on the windward side and, in so doing, shape the form of the gnarled trees.

There is an abundance of epiphytes carpeting the trunks and branches of the oak trees. These are due to the microclimate that has been created by these oaks on an otherwise barren moorland. The tangle of epiphyte species has yet to be individually identified.

Wildlife has found an instinctive haven of rest in this woodland, with the granite boulders sporting vipers or adders basking in the summer heat.

Many species of birds can be seen with buzzards, kestrels and ravens nesting there – away from humans! I returned to this special place 40 years ago with my then-young daughters. It had not changed other than the fact that the hanging lichens made this copse even more mysterious!

The common rhododendron, since its introduction from the Iberian Peninsula some 250 years ago, has thrived in the Celtic rainforests of west-coast Scotland. Creeping across the forest floor, it has blanketed out ancient woodlands by its creation of acidic soils and its inter-tangling mass blocking out sunlight and thus, denying the woodland of its natural vegetation and wildlife. This invasion has caused the demise of lichens besides the rhododendron’s capacity to transmit deadly diseases; thus, destroying the growth of young trees. This particular species of rhododendron (Rhododendron ponticum) was introduced into nearby parks and garden estates and the spores of which, have colonised the Celtic rainforests. Much toil is needed in ripping this species out of the ground and any eradication needs an annual check to ensure that it is gone for good.

The threats to temperate rainforests

The treats are manifold, ranging from human exploitation in land clearance to the invasion of other plant species and, of course, climate change. With an increase in the frequency of droughts such rainforests’ microclimates will change, for without water and changing wind directions, what we see now will be gone in the near future. The very future of both temperate and tropical rainforests and their abundance of wildlife lie distinctly in our laps.