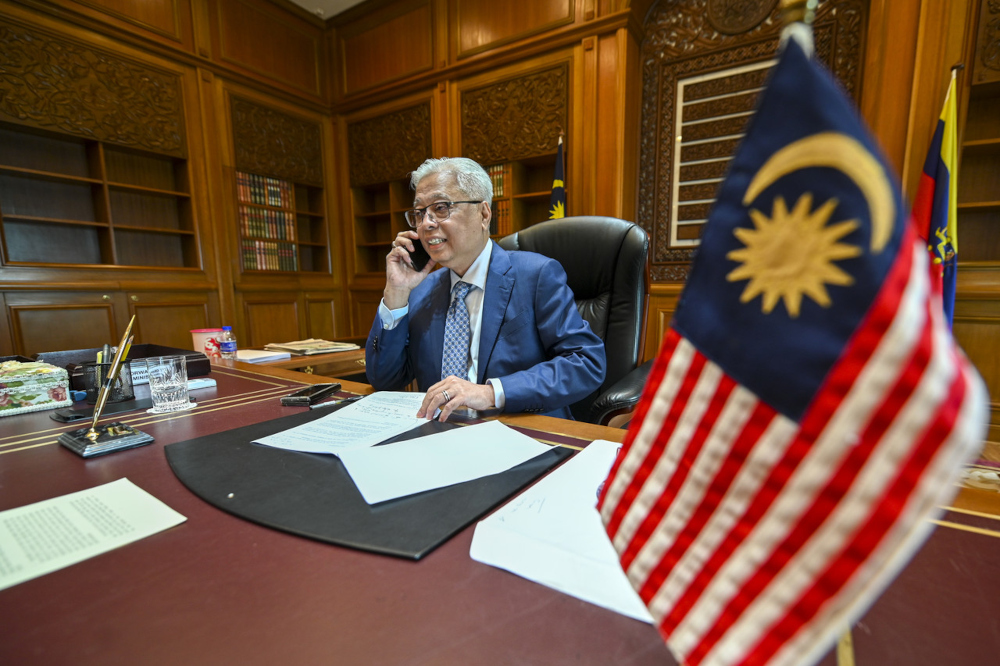 Ismail Sabri has come out a hero by securing an important concession from the Opposition, said Jayum. — Bernama photo

Jayum Jawan, professor of politics and government at Universiti Putra Malaysia, said this agreement would burnish Ismail Sabri’s image as the newly-appointed prime minister and the “man of the hour”.

Jayum said the bipartisan agreement or cooperation yesterday on several key issues was “good news”, and that this “putting public concern ahead of personal and party agenda” should have coloured the actions of Malaysia’s people’s representatives.

“I hope this cooperation is long term and not just putting up a show for the public as the general election is not too far away. Hopefully that it is not a one-off cross-floor deal or cooperation because a ruling party has a very fragile majority and therefore needs this one-off deal to survive,” he told Malay Mail when contacted.

Jayum said the PM-PH agreement announced through a joint statement yesterday was indeed “rare” and possibly unprecedented in the country.

“So, Ismail Sabri has come out a hero by securing an important concession from the Opposition. And it is only his second day as PM.

“If history serves, this might be the first in Malaysian political history. This can only happen as both parties do not want to be seen as disregarding (ingkar titah) the advice of the King to come together to solve the problems the nation is currently facing.

“Partly also, both parties would fear that they may be punished by the people during the coming elections if they are seen as not willing to put aside political differences for the sake of the people,” he said.

As for how the agreement reflected on PH, Jayum likened it to a “double-edged sword” as the Opposition coalition had faced some backlash after missing out on a cross-party cooperation offer from the previous prime minister, Tan Sri Muhyiddin Yassin, as it had been going for its failed bid for the ultimate prize of the prime minister post.

Jayum said the bipartisan agreement would help to cushion PH from the earlier backlash, but agreed Ismail Sabri would still gain more in terms of image.

“So when Ismail Sabri made another offer, PH are in fact cornered. It is a reversal of an earlier position and one that is needed to soften the first blow. However it comes out, Ismail Sabri is the winner and the hero who brings in the prize — the opposition’s support,” he said.

About Cabinet, Parliament and GE15

Universiti Kebangsaan Malaysia’s professor Kartini Aboo Talib@Khalid said the agreement marked a “political ceasefire” with the pact formed between the government and the opposition, saying: “It is time to work for the people and stop the unnecessary populist politics.”

She also touched on Ismail Sabri’s offers for the Opposition to join a special committee on Covid-19 to ensure the national recovery works effectively and reflect the recognition that the national recovery process requires more than just the government’s efforts but would also need a concerted effort by all MPs as it would involve every level from the federal, state, district and down to villages.

Kartini said the agreement would allow Parliament to be “more stable and workable”, noting that continued bickering by each political party would only destroy the people’s hope and the road to recovery for the nation.

She pointed out that the razor-thin majority available now would make it difficult for the Parliament to reach a two-thirds majority for decisions that would require this, and that it would be best to have a confidence and supply agreement (CSA) to ensure key matters such as the Budget is approved for the sake of the economy and people’s well-being.

While not considering yesterday’s agreement to be a confidence and supply agreement to ensure the new government’s continuity, Kartini said it could be a precursor: “It could be the beginning for better and more clear terms of reference for the CSA.”

With the Opposition having previously rejected Muhyiddin’s offer, Kartini said Ismail Sabri’s re-offering of the agreement with PH is a “moving strategy to keep the Parliament balanced and focused on executing the blueprint for the National Recovery Plan”.

“I am optimistic that this agreement is accepted by both PN and PH with the idea of spearheading the country into a new political landscape, living in a reality that the new trend of a minority government will be staying for long in Malaysia as a result of mixed seats in urban areas and delineation,” she said.

As for the effect of the political ceasefire, Kartini said: “With this agreement, Ismail Sabri would likely retain his position until GE15.”

Jayum said the agreement resembled a CSA, as it was an agreement of sorts and an exchange of support, where “both sides win and got what they want”.

Jayum said it does seem like Ismail Sabri’s position as prime minister was “secure for now”, and his first parliamentary meeting will go on very smoothly where he need not worry about being dislodged by any disgruntled members of his Perikatan Nasional component parties.

“But that cooperation (between him and PH) will last as long as he is able to deliver on the promises secured between him and the PH leaders. Remember, there are also his component leaders in PN to appease too and get support from for the agreement he has secured from PH,” he said.

Asked whether the agreement would give Ismail Sabri more space to decide on Cabinet posts and seat allocations for GE15, Jayum said these are different issues and that Ismail Sabri would still have to deal with competing demands from component parties in the ruling coalition for seats to contest in elections and also for more important ministries.

Oh Ei Sun, senior fellow of the Singapore Institute of International Affairs, said the agreement did not necessarily indicate Ismail Sabri’s position would be guaranteed.

“No, this is not a CSA, because they simply say they share some views on some current issues they did not say the MPs of the opposition will support Ismail Sabri to remain as prime minister. It is simply a statement of mutual concerns.

“No, it does not guarantee Ismail Sabri will be able to keep his position, he first has to make sure his own party, as well as Bersatu, are happy, then perhaps he can keep his position longer,” he said when contacted.

Oh said the agreement appeared “very good” for Ismail Sabri as he was able to bring the Opposition symbolically to be on the same page, and suggested that the meeting and agreement were almost akin to “an offer you could not refuse” for PH as it could be considered to be rude or that they were not thinking about national interests.

“I think it is quite rare to come out with such a joint statement, but that’s because now we have Covid-19 and if there’s not such a national calamity facing us, I don’t think they’ll come out with statements like that,” he said.

Oh also voiced caution over the PH leaders signing off on the statement when it contained the Keluarga Malaysia phrase, which he described as the political slogan of the opponent party that is still vague for now and yet to be fully fleshed out and could give the impression that they were buying into it.

He said that this gave off the appearance of a “sense of helplessness and haplessness”, with the Opposition at the mercy of Umno as it takes charge again politically.

“For me, going to meet Ismail Sabri and signing on such a statement with Keluarga Malaysia and so on, I think it highlights the futility of the Opposition putting up a fight to try to get the premiership and so on, because again it highlights Umno’s been firmly in charge even after it was defeated in a general election, it could still bounce back, be firmly in charge, in the pilot’s seat or driver’s seat and you have to in a sense subscribe to whatever Umno offers you, albeit it’s not much,” he said. — Malay Mail