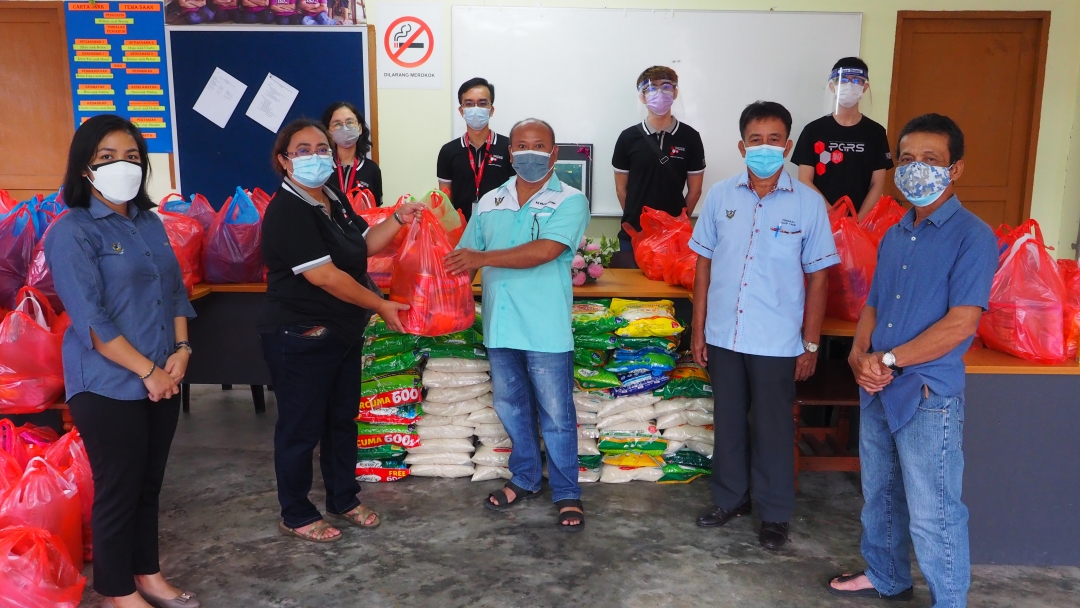 Shella (second left) hands over the food packs to KK William, witnessed by (from left) Angela, Penghulu Gaup, a representative from the village and other PGRS members. – Photo from Swinburne Sarawak

The 87 food packs were donated by Swinburne Sarawak staff and students, as well as friends and associates of the PGRS.

This initiative, said food donation committee leader Shella Georgina Beatrice, was amongst many socially-responsible activities conducted by the society, aimed at bridging the university with the rural communities and at the same time, addressing the difficulties of securing daily essentials faced by the community of Kampung Tema Saan.

“With this donation, we hope that it would also lessen the financial burden of the affected community,” she said.

“The PGRS also hopes that such an initiative could be replicated by other societies and NGOs (non-governmental organisations) especially during these difficult times.

“The PGRS expresses its gratitude to Tebedu District Officer Joseph Liaw for giving his consent for us to enter the village and also for lending his support and assistance in making this food distribution a success.”

Meanwhile, village headman KK William Batong expressed his gratitude for the food donations, describing them as ‘a tremendous help’ in that many villagers had been badly affected by the Covid-19 pandemic.

The food baskets were presented to KK William at the operations room of the village, witnessed by the district’s state administrative officer (SAO) Angela Thomas and local community leader Penghulu Gaup Takip.

Kampung Tema Saan is a Bidayuh village in Tebedu District, home to 339 people from 42 households. It recorded community Covid-19 infection in June, but since then, the villagers have received treatments and subsequent vaccination.

The PGRS serves as a platform for Swinburne Sarawak’s post-graduate students to foster academic and social interactions and sharing of research experiences with fellow researchers both within and outside of the university. Since its establishment in 2018, the society has organised and run various social and academic events.