Tuesday, October 26
You are at:Home»News»Sarawak»Tokyo Paralympics: Congratulatory messages pouring in for Bonnie 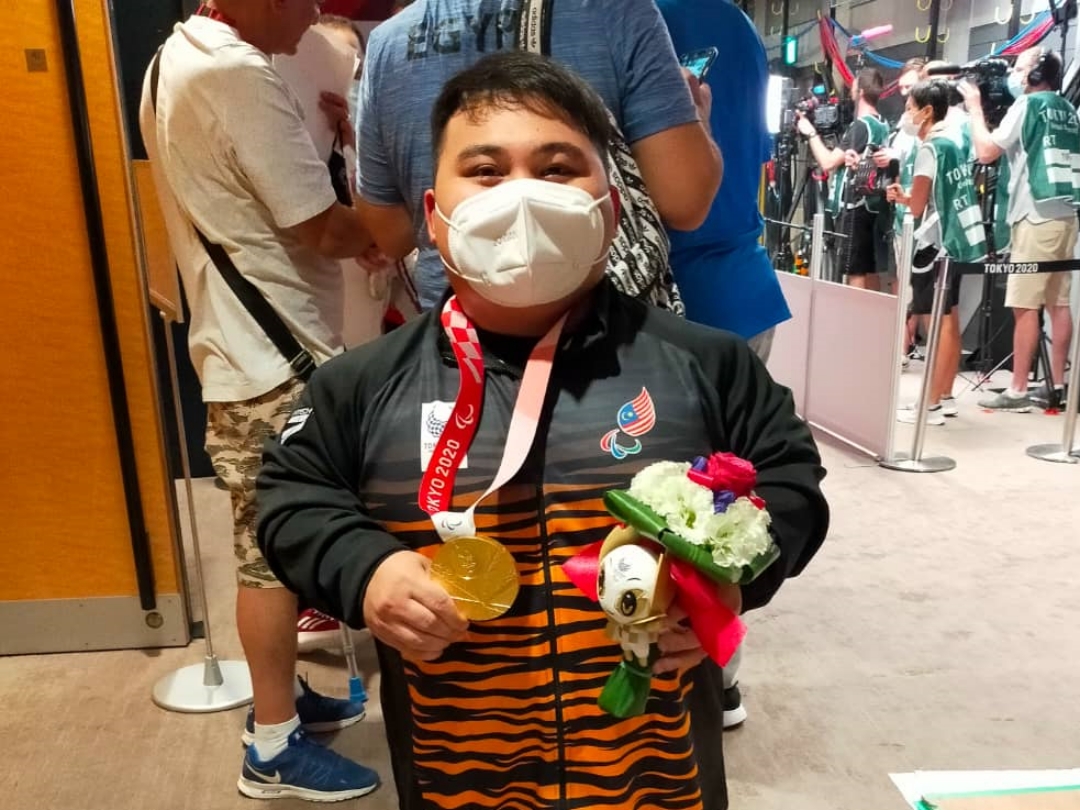 Bonnie with the gold medal he won at the Tokyo Paralympics.

Minister of Youth and Sports Datuk Abdul Karim Rahman Hamzah said it was indeed a very good Merdeka Day present for Malaysians.
“I am very very happy today. Finally, Negaraku and Jalur Gemilang is heard and flying in Tokyo.

“My congratulations to Bonnie for achieving the gold medal and a Paralympic record. He has made all Malaysians and Sarawakians feeling proud,” he said when contacted.

“Yes…definitely I hope Bonnie’s achievement will inspire other Malaysian and Sarawakian athletes to achieve glory at the global level,” added Karim who is also Minister of Tourism, Arts and Culture.
“We are extremely happy for Bonnie’s achievement. He won a gold medal for Malaysia.

“They were very inspired and motivated to win for Sarawak and Malaysia.

“After being told of the good news, the chief minister said federal as well as state level, the athletes will be given incentives for their great achievement,” she added.

“I would like to reiterate … I sincerely hope that the public now would see people with disabilities in a different light. Please do not only look at their disabilities but also at their potential and abilities.

“Let’s provide better accessibilities and opportunities for them in terms of infrastructure, intervention and rehabilitation, education and training in sports, culture, arts and employment.

“We want Sarawak to be a socially inclusive society with no one being sidelined. My experience in working with people with disabilities is that they do not want pity but instead they want dignity.

“They want to make Sarawak known on the world map. For this Tokyo Paralympics, they want to fly high. Fly Kenyalang fly. Fly high for Malaysia,” she urged the Sarawak para athletes. 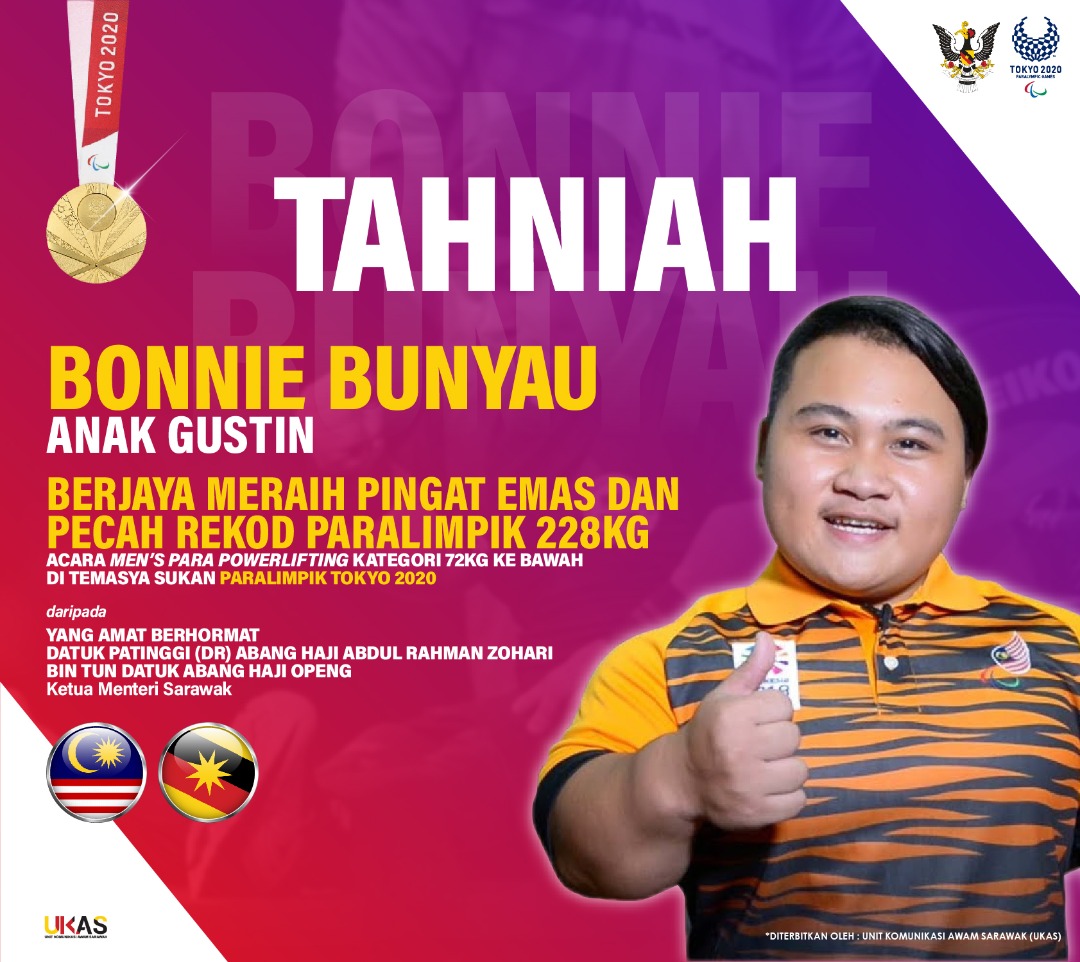 “Congratulations Bonnie Bunyau for winning the gold and breaking the Paralympic record of 228kg,” he said.

Tan Sri Muhyiddin Yassin in his Facebook said that all sports fans in the country are definitely celebrating Malaysia’s success in winning the first gold medal at the Tokyo Paralympics, which was contributed by Bonnie.

“The ability to perform a lift until the national anthem Negaraku resonates in the arena proved that you are indeed worthy as one of the main prospects of winning a gold medal in this Games.

“The impressive performance that broke the Paralympic record will surely continue to be remembered in the history of national sports. Congratulations to Bonnie, the coaching staff and the entire Malaysian contingent,” he said.

Dato Seri Najib Razak also informed in his Facebook page that Bonnie has won the gold in the powerlifting event.

“Good news from the Tokyo 2020 Paralympics. Well done and congratulations!” he wrote.

Bonnie pulled off an amazing feat when he won the first gold medal for Malaysia on the fourth day of the Tokyo Paralympic Games yesterday.

More impressively, Bonnie who is from Serian also broke the Paralympics record of 227kg set by Rasool Mohsin from Iraq in Rio Paralympics in 2016 when he lifted 228kg in his third attempt on the first day of the sport.

However, Bonnie did not better his own world record of 230kg that he set at the 11th Fazza Dubai Powerlifting World Cup in the United Arab Emirates (UAE) in June this year when he failed to lift 231kg in his fourth attempt.

Bonnie started brilliantly with a first lift of 217kg and continued to maintain an exceptional performance, lifting 225kg in the second attempt before completing the third in style to break the record.

Bonnie’s success in winning the first gold medal for the country’s powerlifting camp also marked another milestone in Malaysia’s participation in the prestigious games since the 1972 edition in Heidelberg, Germany.

Malaysia’s first medal in the Paralympic Games also came via powerlifting through P Mariappan who won bronze in the 1988 edition in Seoul, South Korea.

At the Barcelona Paralympics in 1992, the national powerlifting squad improved on the medal tally in South Korea with one silver medal contributed by Cheok Kon Fatt and one bronze by Mariappan.

The 2008 edition in Beijing saw another powerlifter Siow Lee Chan making history when she became the first female Malaysian athlete to win a medal at the Paralympic Games. She won a bronze.

After Bonnie, the Malaysian challenge in Japan will be continued by Jong Yee Khie in the 107kg event next Monday (Aug 30).