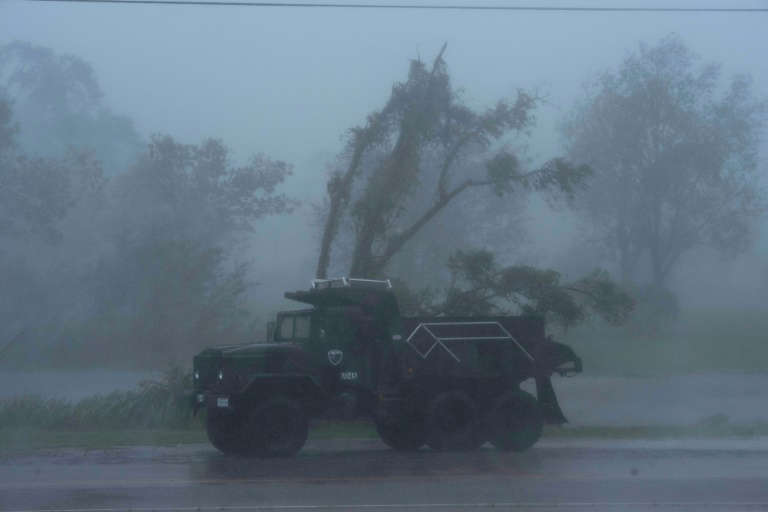 A truck is seen in heavy winds and rain from Hurricane Ida in Bourg, Louisiana on August 29, 2021. – AFP photo

Ida slammed into the Louisiana coast as a Category 4 storm, and was downgraded to a Category 3 by evening — the same strength Katrina was when it came ashore in 2005.

“Ida is a dangerous category 3 hurricane on the Saffir-Simpson Hurricane Wind Scale. Rapid weakening is expected during the next day or so, however, Ida is forecast to remain a hurricane through late tonight,” the National Hurricane Center wrote in an advisory.

The NHC also warned that the storm surge would create a “life-threatening situation” and urged residents in affected areas to “take all necessary actions to protect life and property.”

As of 7:00 pm, Ida was packing maximum sustained winds of 120 miles (195 kilometers) per hour, slightly slower than when it made landfall at Port Fourchon, Louisiana, approximately 100 miles (160 kilometers) south of New Orleans.

President Joe Biden called Ida “a life-threatening storm” that “continues to rage and ravage everything it comes in contact with.” Speaking after a briefing with federal emergency managers, he urged anyone on the storm’s path to hunker down immediately and heed official warnings.

Ahead of Ida’s arrival, showers and strong wind swept New Orleans’ deserted streets throughout the morning, buffeting boarded-up windows at businesses and homes surrounded by sandbags.

State Governor John Bel Edwards said Ida could be the most powerful storm to hit the state since 1850.

“There is no doubt that the coming days and weeks are going to be extremely difficult,” he said at a briefing Sunday, adding that some people might have to shelter in place for up to 72 hours.

“Find the safest place in your house and stay there until the storm passes,” he wrote earlier on Twitter.

Storm surges flooded the town of Grand Isle, on a barrier island south of New Orleans, and low-lying highways in the area were covered in water.

Extensive and long-lasting power outages are expected, with more than 700,000 homes without electricity by evening, according to the website poweroutage.us.

Amid urgent warnings of catastrophic damage, most residents had heeded authorities’ instructions to flee. Scores of people packed bumper-to-bumper roads leading out of New Orleans in the days preceding Ida’s arrival.

In one neighborhood in eastern New Orleans, a few residents were still completing last-minute preparations just hours before landfall.

“I’m not sure if I’m prepared,” said Charles Fields, who was still bringing his garden furniture indoors, “but we just have to ride it.”

In St. Bernard Parish, a large ferry boat broke free of its moorings and was being blown up the Mississippi River, according to local TV channel WWL, which posted video of the boat.

Governor Edwards warned on Sunday that Ida would be “a very serious test for our levee systems,” an extensive network of pumps, gates and earthen and concrete berms that was expanded after Katrina.

He told CNN that hundreds of thousands of residents were believed to have evacuated.

The storm “presents some very challenging difficulties for us, with the hospitals being so full of Covid patients,” he said.

The Southern state, with a low rate of vaccinations, has been among the hardest hit by the pandemic, severely stressing hospitals. Hospitalizations, at 2,700 on Saturday, are near their pandemic high.

The memory of Katrina, which made landfall on August 29, 2005, is still fresh in Louisiana, where it caused some 1,800 deaths and billions of dollars in damage.

“It’s very painful to think about another powerful storm like Hurricane Ida making landfall on that anniversary,” Edwards had previously said.

Rainfall of 10 to 18 inches (25 to 46 centimeters) is expected in parts of southern Louisiana through Monday, with up to 24 inches in some areas.

The storm is expected to continue weakening as it moves over land, with a predicted track taking it north over the central US before veering eastward, reaching the mid-Atlantic region by Wednesday.

– Ida and the coronavirus –

The White House said Sunday that federal agencies had deployed more than 2,000 emergency workers to the region — including 13 urban search-and-rescue teams — along with food and water supplies and electric generators.

Local authorities, the Red Cross and other organizations have prepared dozens of shelters with room for at least 16,000 people, the White House added.

Plans to cope with the hurricane — and plans for the shelters — have been complicated by Covid-19.

Biden on Saturday urged anyone in community shelters to wear masks and maintain distance.

Scientists have warned of a rise in cyclone activity as the ocean surface warms due to climate change, posing an increasing threat to the world’s coastal communities. – AFP

Previous ArticlePutrajaya urged to conduct study on safety, efficacy of Sinovac Covid-19 vaccine for those aged 3 to 17
Next Article Biden in solemn ritual over remains of fallen US troops