Tuesday, November 29
You are at:Home»Features»Enjoying ‘green and gold’ splendours of Bau 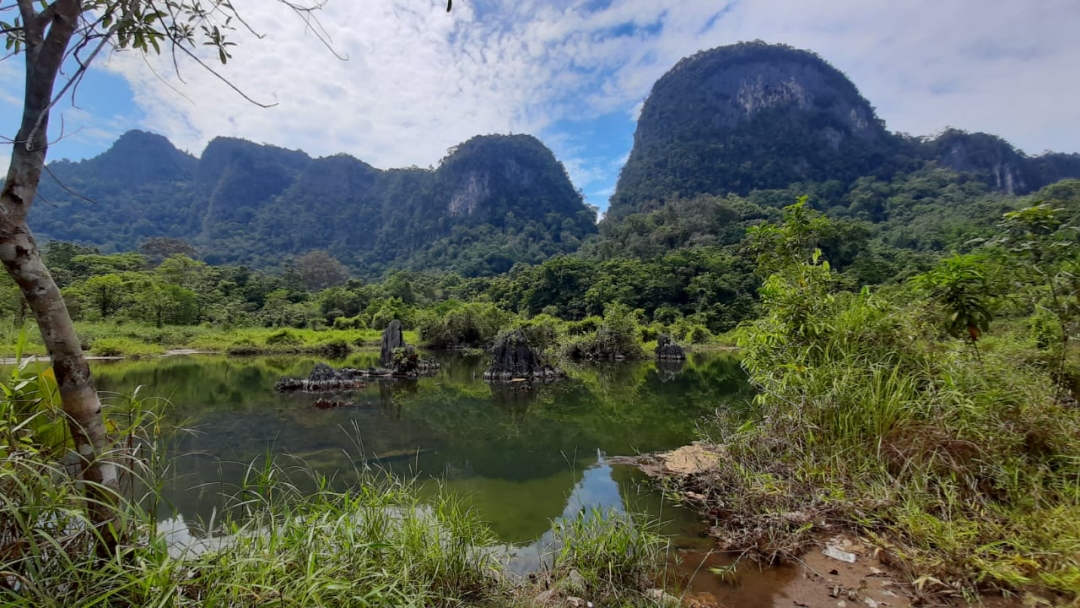 The ‘Sleeping Beauty’ looms over the background landscape.

District’s historical, natural and cultural attractions can be capitalised into tourism packages catering to different segments of visitors

WITH the rich diversity of attractions to offer, Bau ought to be developed further into becoming amongst Sarawak’s key tourism destinations, slated for the locals to treat as their weekend getaway or for the visitors to enjoy a short trip to the Kuching’s hinterlands.

“A short drive through Taiton Lorong 9 has awed us with its rich tourism resources. The mountain range and the body of water offer a picturesque landscape that resembles a ‘Mini Guilin’.

“The caves, with interesting geological formations and streams running through them, are magnificent. The historical accounts and remains of the mining community back in the 19th century are interesting storylines to be shared,” he shared his findings with thesundaypost. 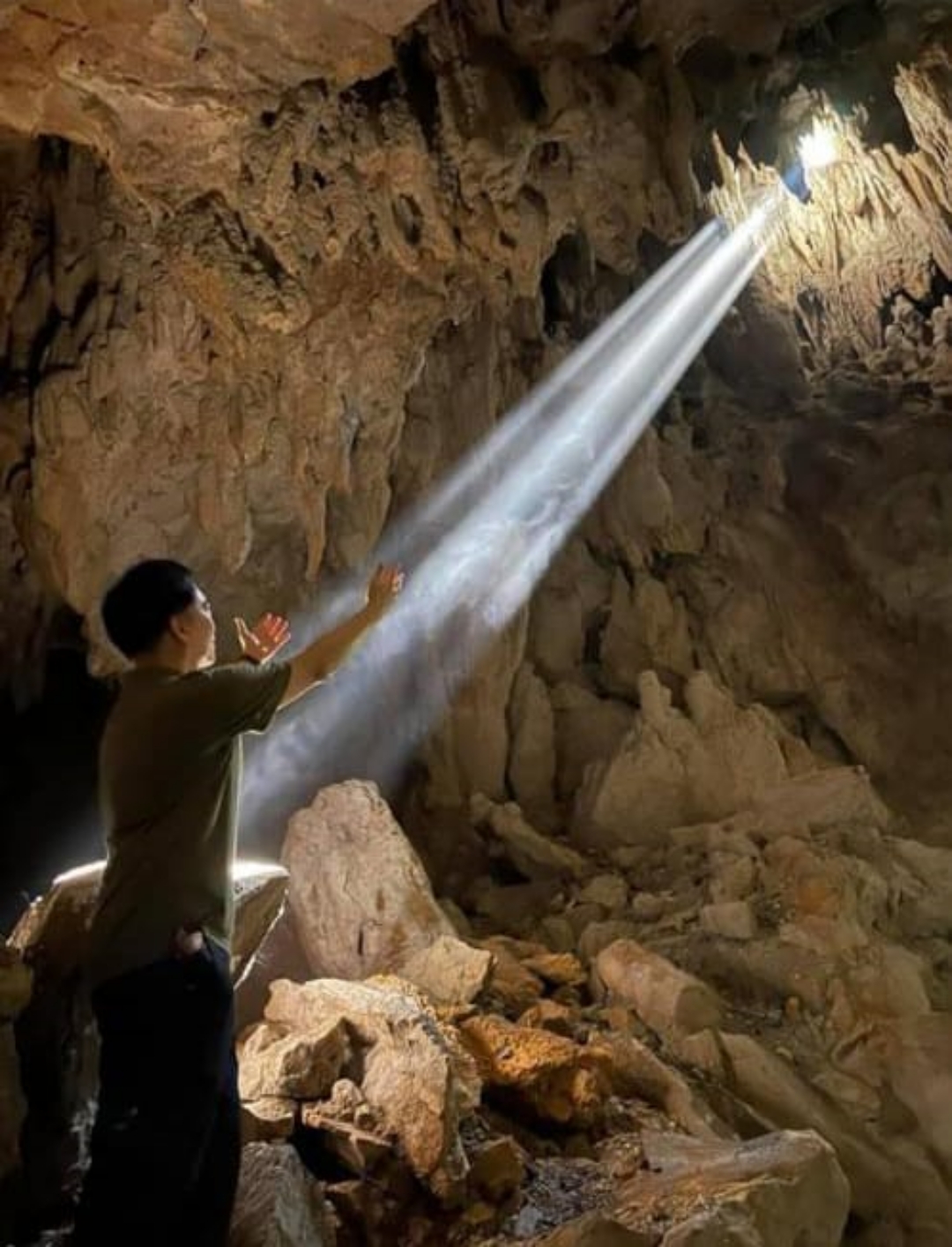 Hii ‘embraces’ the ‘Angelic Rays’, which are slivers of sunbeams that shine through the openings of one of the caves at Lorong Taiton 9.

Hii said he was glad to have met several community leaders in Bau who had very detailed and interesting knowledge about the mining history of the district, and the various places of tourism potential in and around there.

According to him, such knowledge should be shared with and passed on to other locals who could be trained as local community guides or hosts.

Leading the group of district community leaders was Pemanca Bong Jong Long, who is also chairman of the Hua Gong Historical Society.

“The attractions in Bau can be packaged into a day-trip from Kuching, or even an overnight stay at the town. The different packages catering for visitors with different interests could be creatively designed focusing on culture, adventure, nature, food and festivals.

“The local community could work together with the tourism industry players in coming up with workable packages,” Hii suggested.

He also said the local community should continue to liaise with the local authorities towards realising their wish of developing local tourism.

“The idea of a Bau Mining History Gallery should be supported, as we wait for the approval of a purpose-built Bau Gold Mine Museum. This is important to keep and display all the key artefacts and historical documents.

“Through the commitment shown by the local community, the authority could help empower them in preserving, protecting and maintaining the natural resources, particularly the potential tourism areas that have been identified.

“The authority should also engage with the local community towards putting in place some basic facilities for the convenience of the visitors such as walkways, public toilets and signs.

“With such empowerment, we could expect a strong community-based tourism to flourish in Bau,” added Hii, who was also accompanied at the study trip by Sarawak Research Society chairman Dr Hiram Ting and the latter’s team comprising content coordinators Nicholas Tiong and Clement Ting, as well as administrative coordinator Lily Lau.

Dr Hiram, who is UCSI University’s associate professor for its Faculty of Hospitality and Tourism Management, said he was undertaking the ‘Experiential Tourism: Green and Gold Exploration in Bau District’ project – a tourism initiative launched under the ‘Responsible Borneo’ (REBORN) umbrella.

“It is our immediate response to the Sarawak Commitment to Responsible Tourism 2021, declared by Minister of Tourism, Arts and Culture Sarawak Datuk Abdul Karim Rahman Hamzah at the closing ceremony of the International Conference on Responsible Tourism and Management 2021, on May 28.

“In addition to the cooperation with ministry, the project is also a collaborative effort between SRS and the local community towards realising responsible tourism in Bau District. 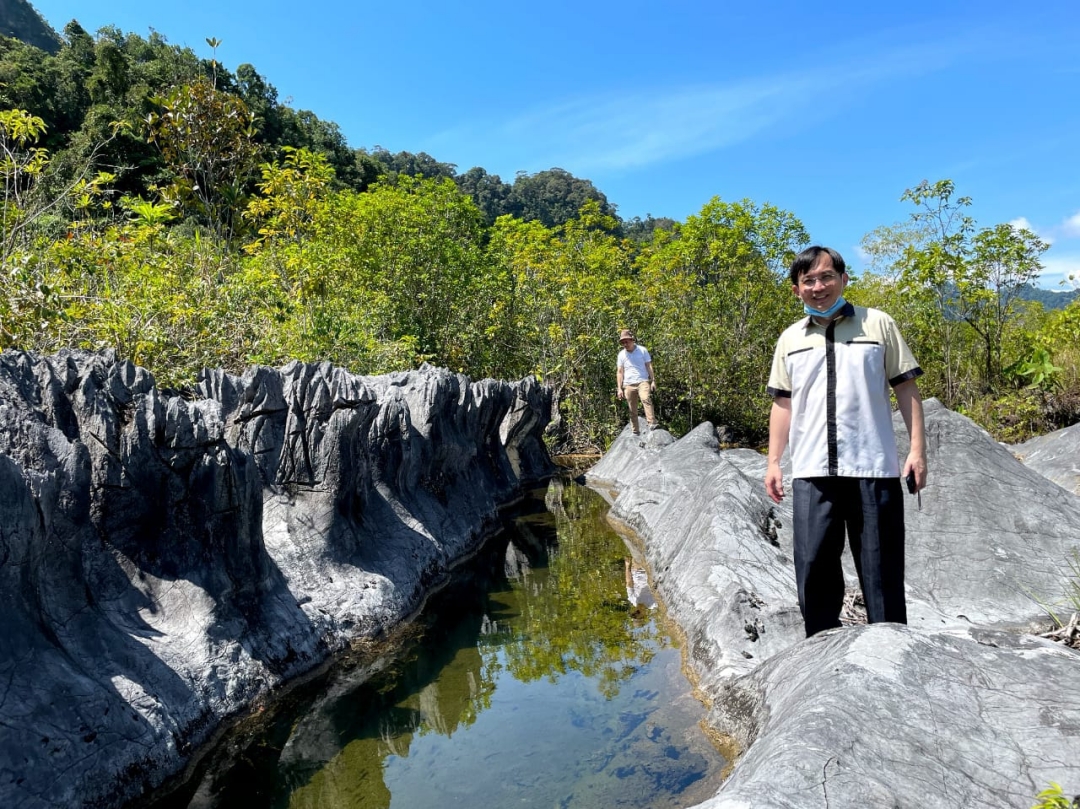 The associate professor said Bau District had been chosen as the site of the pioneering study for three main reasons:

Firstly, Bau District is situated beside Kuching District and close to Kuching City – making it an ideal place to conduct the project, develop tourism prospects, and promote tourism not only to the residents of Kuching and its neighbouring districts, but also to international visitors upon the reopening of borders;

Secondly, it is blessed with magnificent natural wonders and is rich cultural heritage. Case in point, the landscape of ‘Taiton’, which is an area in the district dubbed ‘Little Guilin’. It is also home to temples built more than a century ago, along with traditional stories passed on through generations; these are among the ‘tourism contents’ one can observe and curate, and;

Thirdly, the development of Bau District has a long history in Borneo, with connections to the British, Kalimantan (Indonesians), the Chinese, and the Bidayuh communities.

Having said that, he said there were still much more that needed to be done to conserve and preserve the tangible and intangible heritage of Bau District.

Taking mining operations as an example, he described it as amongst the significant historical events in the area.

“Certain individuals and institutions have started the good work of parsing various records into words.

“As far as tourism is concerned, SRS sees great potential in packaging the nature, culture, and history of Bau District into ‘green and gold tourism’ – the ‘green’ refers to nature, while ‘gold’ refers to its historical and cultural development.

“Given what Bau District can, currently and potentially, offer to local and international visitors, we use ‘experiential tourism’ to underscore the focus on experiencing a particular place, such as Bau District, by actively and meaningfully engaging with her history, nature, culture, and people,” added Dr Hiram. 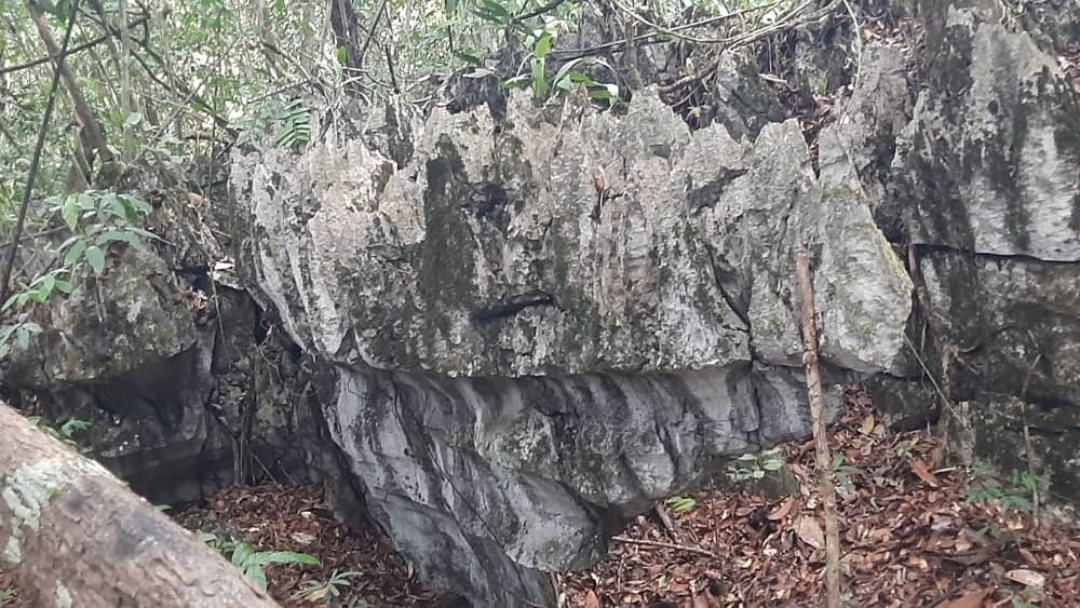 This rock formation, at the Mini Angkor Watt in Paku, resembles the head of a dinosaur.

He felt that responsible tourism would place substantial emphasis on community orientation and involvement; it could only be effectively implemented through trust, respect, and cooperation amongst all stakeholders.

“We started our project by meeting the community leaders, communicating with them, and learning from them. This gave us the right footing to kickstart the project and understand Bau District better.

“Thanks to the company of the community leaders, we’re able to explore some less-known sites, savour the traditional food, and talk to the local people – an experience that I’m deeply grateful for.

“Unfortunately, I could also observe littering and vandalism in many areas. Waste and damage are evident, which could become worse if only haphazard, or no action at all, was taken.

“It’s high time that we come together to develop tourism in Bau District in a holistic and pragmatic manner. As part of our commitment to responsible tourism, community capacity-building and empowerment, a long-term plan would play a pivotal role in safeguarding our heritage and developing tourism that could ensure economic prosperity, social inclusivity, and environmental sustainability,” he stressed.

Dr Hiram said only by working together as a collective and responsible unit that Bau’s ‘green and gold’ features could be preserved — using tourism as a ‘vehicle’.

He believed that the district could be developed into becoming ‘an exemplary responsible tourism destination in Sarawak’, and a reference point for tourism development in other districts and rural areas.

Sharing a similar sentiment, Pemanca Bong said although Bau did not have a port or airport, it still held vast potential for development, both in economic and tourism sectors. 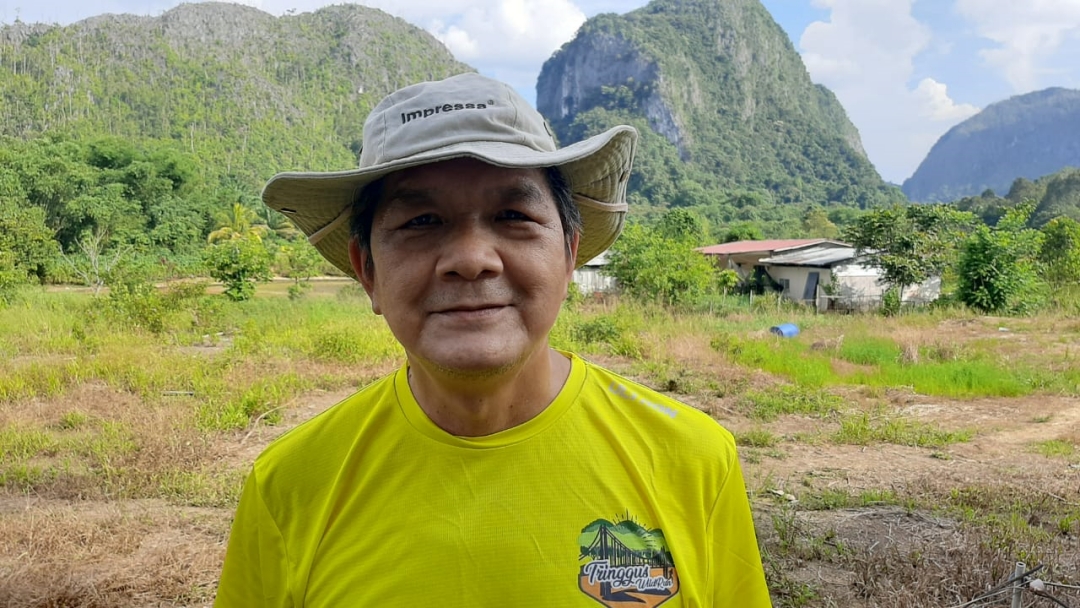 Pemanca Bong in a photo-call, taken with the ‘Sleeping Giant Baby’ in the background.

“Chief Minister Datuk Patinggi Abang Johari Tun Openg had, in March this year, announced that the state government would build a new Customs, Immigration and Quarantine Complex (CIQ) and once completed, it would lead to more prosperity for Bau District.

“Bau does not only possess many scenic areas; many of them are still unexplored or yet to be developed as tourist attractions, as they are either within nature reserves or mining concessions.

“The district is also richly linked with Indonesia in terms of cultural heritage,” he said.

According to him, as those places are still not opened to the public, illegal activities such as mining and rubbish-dumping are rampant.

“Right now, we do not have any proper tour package or tourism-related event that can keep the tourists in Bau for three days, or up to a week’s worth of stay.

“However, there are plans to develop tourism in Bau District, and we are currently working closely together with the community, Bau District Council, the Ministry of Tourism, Arts and Culture Sarawak, and also Sarawak Research Society, to turn this into a reality soon,” added Pemanca Bong.

Previous ArticleMeaning of colours of fruits and vegetables
Next Article Dear EC, may I ask a few questions, please?