Friday, January 21
You are at:Home»News»Sabah»Body of driver whose car was swept away by current while crossing Kionsom river found 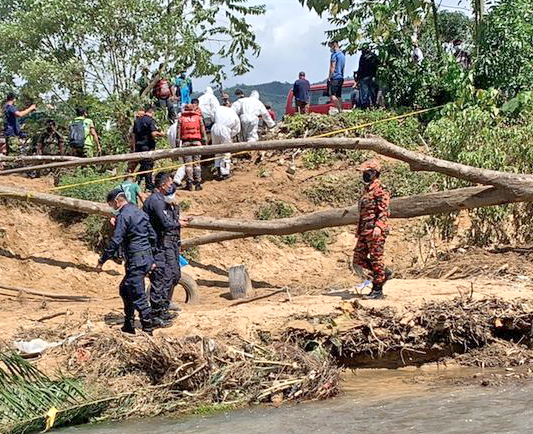 Search and rescue personnel carrying the victim’s body out from the Pomotodon river.

KOTA KINABALU: The driver of the Perodua Myvi car that was swept by water current while crossing a bridge at Kionsom river in Inanam on Sept 3, was found at Pomotodon river, near SK Pomotodon in Inanam on Monday afternoon.

The body of Simon Sanga Tupe, 68, was found by villagers among debris along the river around 1.30pm.

A spokesperson from the Fire and Rescue Department said the body was discovered by villagers who were assisting in the search and rescue operation for the missing victim since the incident happened on September 3.

“We handed the body to the police for further action,” said the spokesperson, thanking all parties involved in the operation.

The driver and a passenger had attempted to cross the concrete bridge around 6pm after seeing a couple of four-wheel-drive vehicles had made a successful crossing.

As the car drove onto the unbarricaded bridge, it was swept away by strong water current due to heavy rain.

On Saturday, the passenger, identified as Juning Maturun, 37, was found by villagers at Sungai Dambai, about 200 meters from Kg Dambai.

The incident was witnessed and recorded by a couple who were behind the Myvi car and the video went viral in social media.