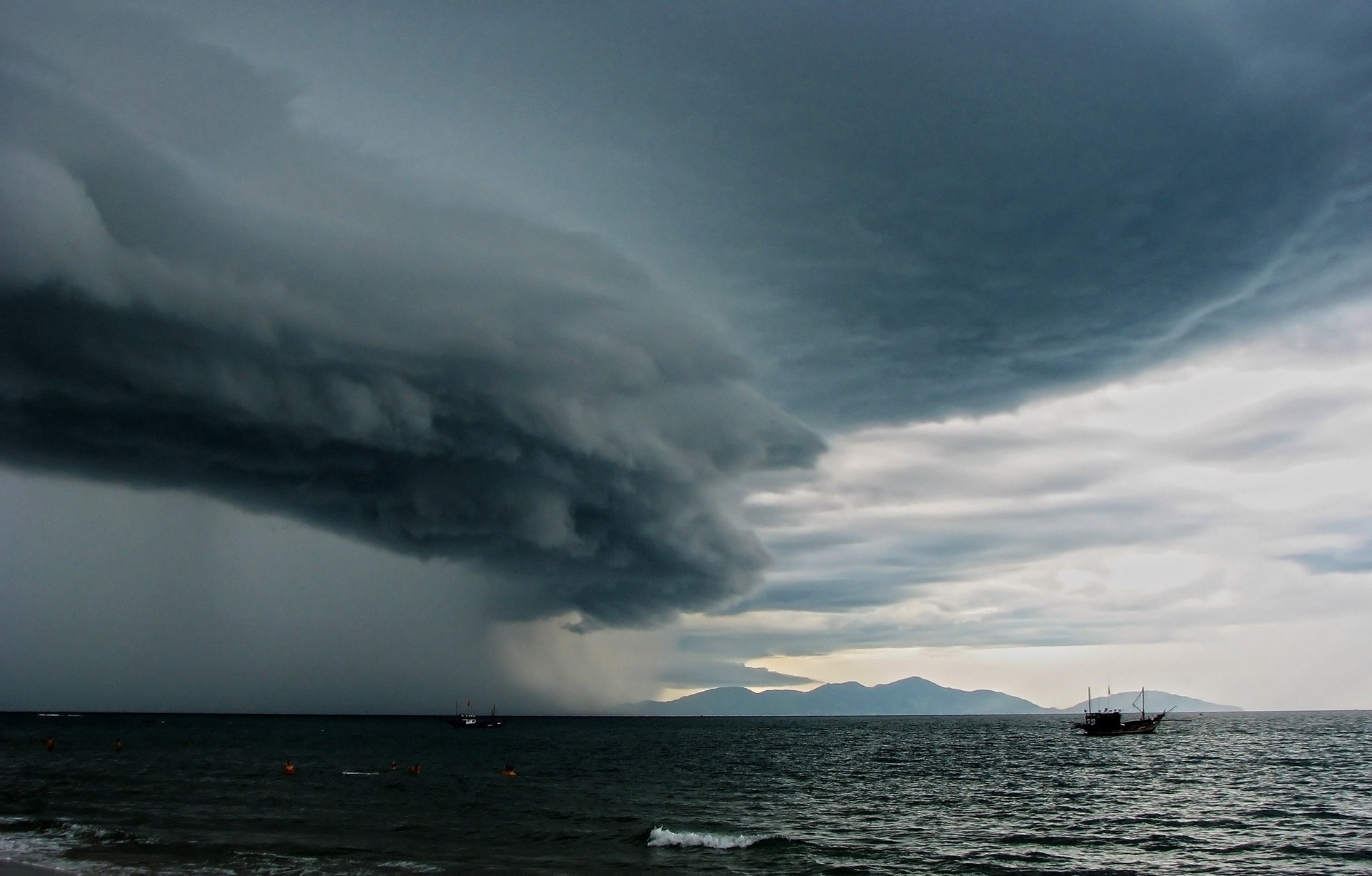 Storm clouds are seen over the sea. Meteotsunamis are generated by rapid changes in atmospheric pressure causing the displacement of a body of water either at sea or on large lakes. – Photo from PxHere

MOST of us are aware of tsunamis, large waves caused by submarine disturbances and land upheavals, such as volcanic eruptions, earthquakes, and giant movements of the Earth’s crust along fault lines.

The rapid motion of an eruption or shock gives rise to a train of large, rapidly moving waves that have wave-lengths of several hundred kilometres and move at up to 700km per hour. They may have a height of only one metre or so in deep ocean waters, but rise to heights of over 30 metres in shallower waters as they approach the coast thus causing sudden and unexpected damage to low-lying coastal communities.

Mostly affecting the Pacific Rim of coastlines and large oceanic islands such as the Hawaiian group, there is often firstly a withdrawal of water along the coast, followed by its almost immediate return. The worst feature of tsunamis is that there is no warning of their generation, except for the detection and strength of the causing earthquake: a warning system has now been established around the Pacific Ocean, based in Honolulu.

Relatively recent geological deposits around southwest England have revealed evidence of former tsunamis and one such deposit is in my county of Somerset. The lowland coastal areas there were inundated by a tsunami generated by a submarine landslip or the displacement along a fault line in the Bristol Channel in 1607. This fault line still moves today causing slight structural damage to surrounding buildings in coastal towns and villages – but no tsunamis!

Such events are tsunami-like sea waves of meteorological origin. They are generated by rapid changes in atmospheric pressure causing the displacement of a body of water either at sea or on large lakes. Triggered by extreme weather events such as thunderstorms, squalls, and storm fronts, all of which suddenly change the barometric pressure, they usually occur when severe weather is moving at the same speed and direction of local wave action towards the shoreline. The actual size of the wave is increased by coastal features such as shallow continental shelves, bays and inlets.

Lasting from a few minutes to several hours, their size, length and the time between one wave breaking and the next, is totally dependent on the speed and severity of the wave front, producing waves of up to two metres plus in height. They are common enough to be given local names: ‘rissaga’ in Spanish Catalonia, ‘ressaca’ along the coastline of Portugal, ‘milghuba’ on Malta, ‘marrobio’ in Italy, ‘seebar’ in Germany, and ‘abiki’ in Japan.

Some of the largest meteotsunamis have been recorded in Nagasaki Bay, Japan, the eastern Adriatic coast, and in the western Mediterranean with respective heights of 5.9, 1.5, and four metres, each causing a few human fatalities.

Near Penzance in southwest Cornwall

It was on July 28, 1761 when after thunderstorms, something peculiar struck Mount’s Bay between Penzance and Marazion. A local vicar, who was a keen naturalist and historian, recorded an event where a cart driven by a man and a boy and drawn by oxen and horses were crossing a sandy beach at low tide. Suddenly they were swamped by an inrush of seawater to a depth of two metres.

He wrote in his diary, “The horses were frightened and plunged, the oxen stood still, the driver and the boy could neither recollect how they should help the cattle or secure themselves, but dared not to approach; and in a few minutes when all was given up for lost, the sea retired, and left them safely to pursue their journey.”

At the same time, people, in a coastal village to the east of Penzance, watched the sea advancing and retreating and when the vicar arrived at 10am he recorded, “… several minutes rushing and the water rising about two metres or more, and then several minutes retreating”. By 11.30am the sea had calmed down. Other similar sightings were reported along the south coast of Cornwall and Devon. 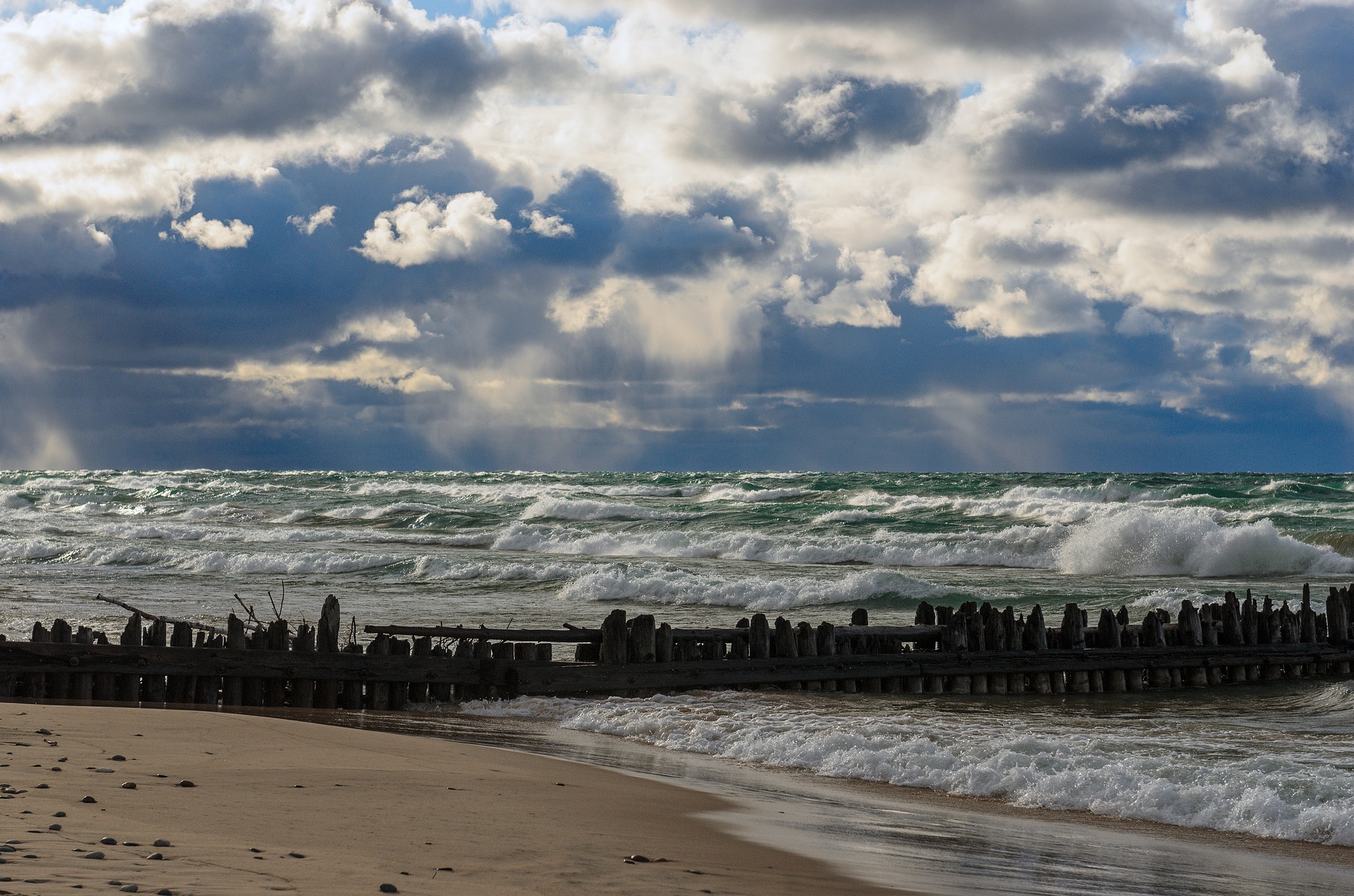 Waves are seen along the shoreline of Lake Superior in upper Michigan. In the Great Lakes, an average of 126 meteotsunamis happen each year. – Photo from Max Pixel

In 2019, the National Oceanic and Atmosphere Administration (NOAA) centre in the USA registered the fact that 25 meteotsunamis hit the Eastern Seaboard states of the USA each year. In the Great Lakes, an average of 126 such events happen each year with three-metre-high waves hitting Chicago in June 1954 causing seven deaths. Fatalities are relatively few but could be considerable with the loss of children’s lives as families tend to picnic on and swim from beaches in summer time.

The first ever world conference on meteotsunamis was held in Spilt, Croatia, in May 2019. In June, this year, the Cooperative Institute for the Great Lakes Research (CIGLR) held a conference at the University of Michigan, focussing on the development of a meteotsunami warning system for the Great Lakes. The impact of climate change and the increasing frequency of stormy weather was on both agendas.

Already this year there have been many drownings on Cornwall’s and Devon’s beaches as many more holidaymakers have flocked to the seaside there. This has been compounded by Covid-19 restrictions on overseas travel. Could some of these deaths be attributed to the little-known subject of meteotsunamis?

I just wonder whether beachcombers and swimmers in Sabah and Sarawak have witnessed the sudden backwash and inrush of seawater on the beaches of these two states? If so, they may have experienced a meteotsunami, most likely caused by a thunderstorm somewhere offshore.