Wednesday, May 18
You are at:Home»Features»Help is always available

Knowing where to get assistance, support is crucial as suicidal ideation stands as a mental health crisis that must not be taken for granted 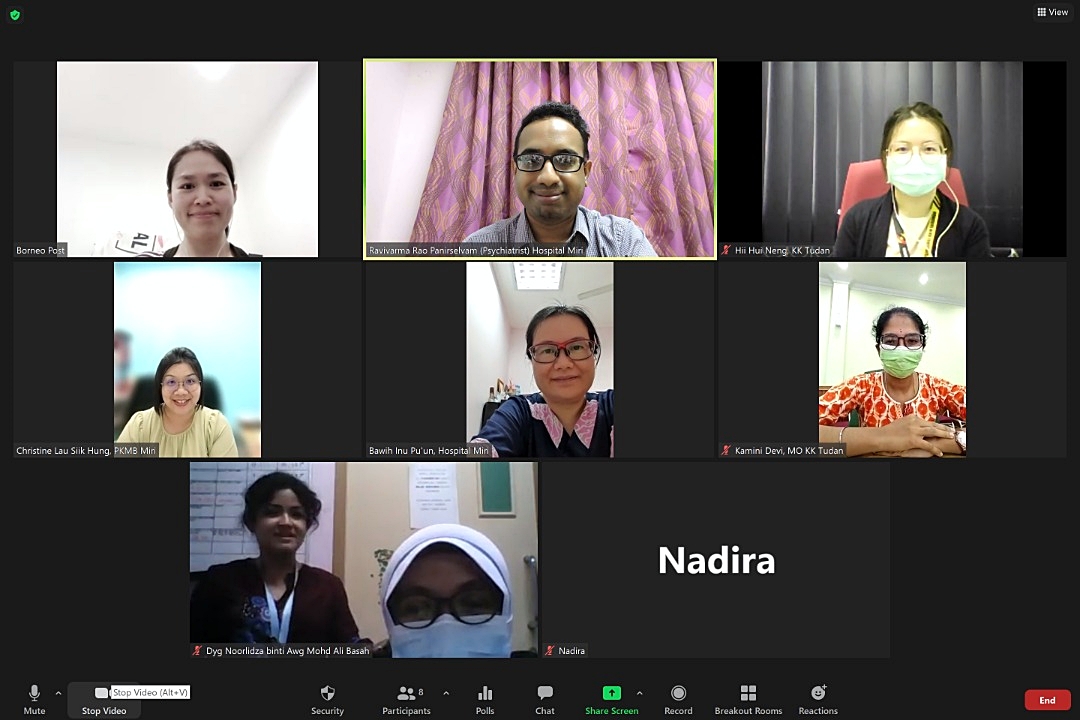 Screengrab shows participants of the Zoom session interacting with one another. Seen on the top row (from left) are the writer, Dr Ravivarma and Tudan Polyclinic counsellor Hii Hui Neng; on the middle row (from left) are Lau, Dr Bawih and Dr Kamini; while on the bottom row are Dr Nur Nadira and Mentari Miri staff nurse Dayang Noorlidza Awang Mohd Ali Basah (right).

WHAT could you do if you started having thoughts about suicide?
It is when you start thinking about ways to harm yourself, with an intention to die.

The media, in general, would often share news about suicides with all the details and the widespread effects on our community, but not the ‘actual tragedy’ of how all of it could have been prevented.

The Covid-19 pandemic has impacted the people’s mental health as well, in that many are struggling mentally due to various reasons such as loss of income, unable to do their favourite activities, seclusion and domestic violence, among other things.

These were the points highlighted during a Zoom session conducted on Sept 10 – the official date of the annual ‘World Suicide Prevention Day’.

The programme involved representatives of Miri Hospital’s Psychiatric Unit, Tudan Polyclinic, Miri Welfare Office and Mentari Miri, who came together to discuss with thesundaypost the importance of disseminating and sharing the information on where one could obtain help.

According to Miri Hospital psychiatrist Dr Ravivarma Rao Panirselvam, a suicidal thought is similar to a wavelength, where someone may have a sudden ideation of taking one’s own life.

“These feelings may build over time, or they may also come in a split moment. Knowing where to get help is crucial to let society understand that help is always available.

“Covid-19 pandemic is a public health issue. Mental health is also a health crisis that must not be taken for granted. It should not be ignored because it is as important as physical health.”

Where to get help 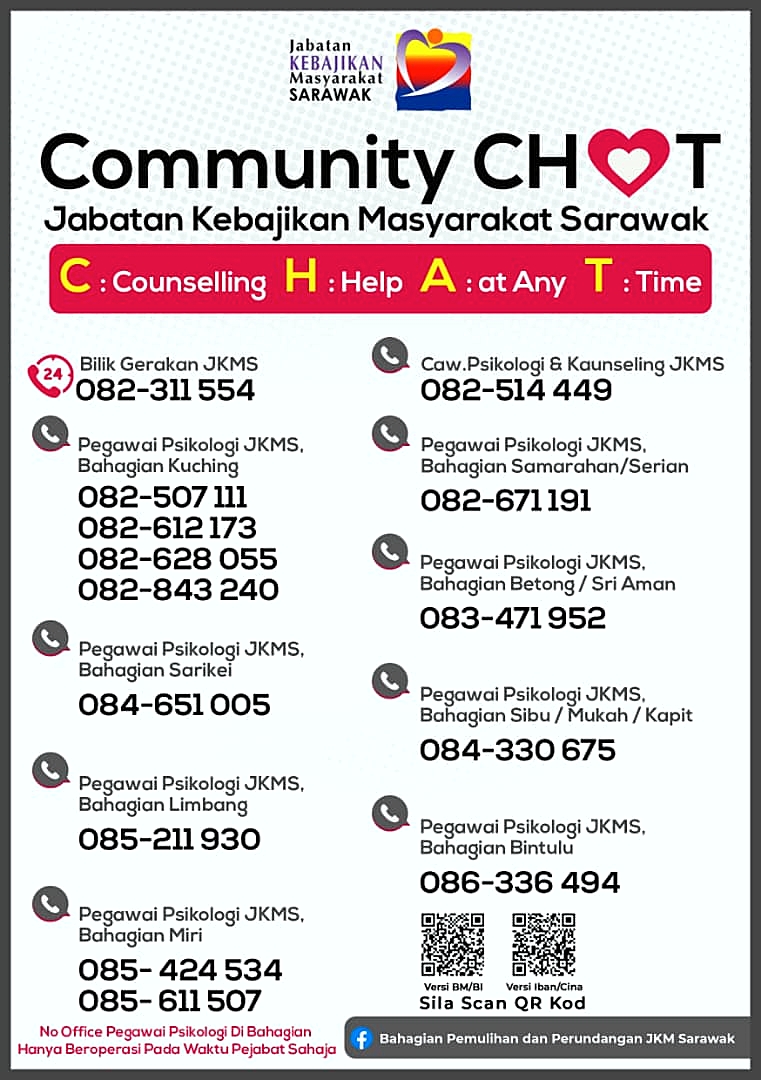 Help is always available even at odd hours, according to psychiatrist Dr Bawih Inu Pu’un.

“When a person who may be in a suicidal crisis or know someone who is in that state of mind, there are options that are readily available in Miri.”

Any person who is in the state of needing assistance with their mental health issue, or at the verge of self-harming, or knowing someone in such a situation, should go to the nearest health clinic or community clinic, where the medical officer or doctor would assess and evaluate whenever necessary.

At Miri Polyclinic, Tudan Polyclinic and Batu Niah Polyclinic, there are family health specialists and counsellors who can help assess and treat depression and anxiety disorder of mild severity.

If necessary, they would refer cases to the Psychiatric Unit of Miri Hospital for further action.

Those who might find the private medical centres to be nearer or more convenient, could arrange for appointments at Columbia Asia Hospital Miri, Miri City Medical Centre, or Borneo Medical Centre (BMC) Miri.

A thing to note is that a visit to Miri Hospital’s Psychiatric Clinic would require appointment, and also reference from the public or private clinics.

“When experiencing psychiatric emergency such as psychotic disturbance, or having suicidal thoughts or aggressive behaviour, it is best to immediately go to the Emergency Room of the nearest hospital (where) there will be medical officers who can help,” said Dr Bawih.

For those living in the northern part of Miri, Tudan Polyclinic provides online booking and walk-in outpatient services for those facing suicidal crisis.

According to Dr Kamini Devi, the walk-in or by-appointment services are available at Tudan Polyclinic during regular working hours (Monday to Friday, 8am to 5pm daily).

Additionally, there would be an officer standing-by during the lunch break between 1pm and 2pm.

Help is available for everyone; however, how willing would an affected person in our community be in getting such help?

An ‘iceberg chart’ was once used by the consultant psychiatrist of Oxford Health NHS Foundation, Prof Keith Hawton, in highlighting the worrying increase in the rate of suicides in England amongst older adolescents, and the significant rise in self-harm amongst young teenagers.

“The chart, despite it focusing on the population of England, is significantly applicable to all societies in all countries,” said Dr Ravivarma.

According to him, the ‘tip-of-the-iceberg’ model represents the suicide cases that have been reported and highlighted to society.

“What we must take notice is the lowest part of the ‘iceberg’ – self-harming happening in the community. These are the cases that would often go unnoticed. That is the area that we hope to highlight to our society.” 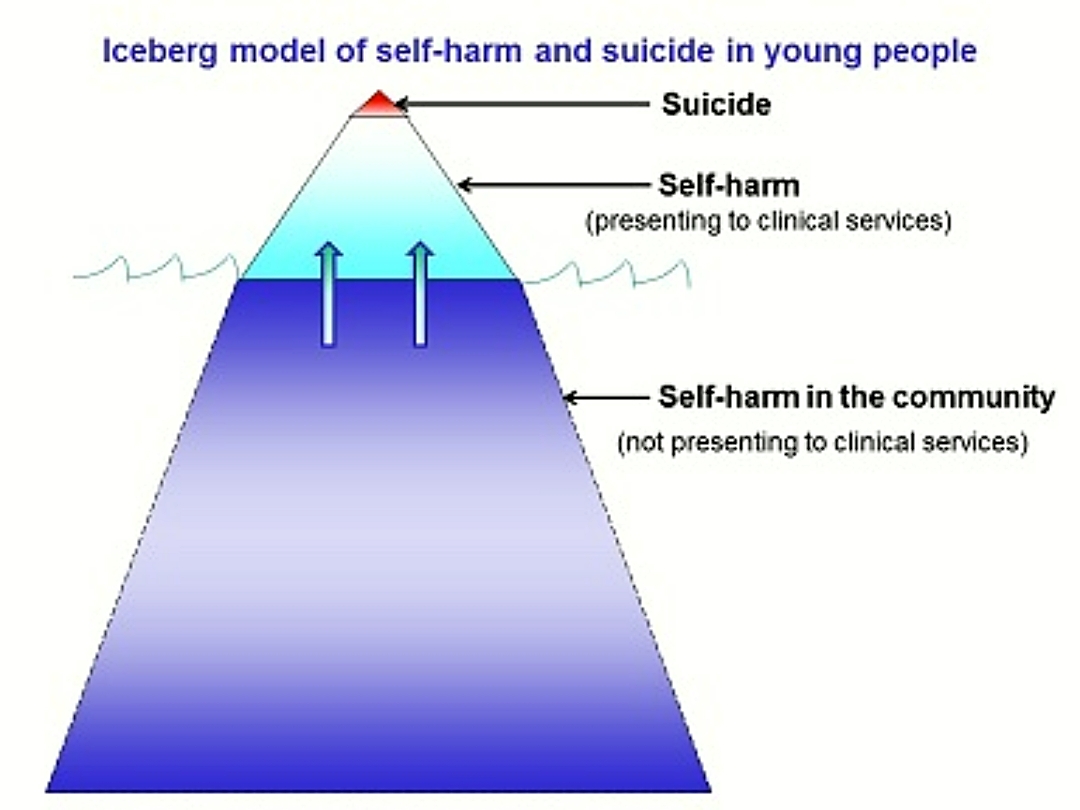 Prof Hawton’s ‘iceberg chart’ is significantly applicable to all societies in all countries, says Dr Ravivarma.

Miri Hospital medical officer Dr Nur Nadira Mohd Nordin pointed out that the readiness to accept help could be affected by stigmatisation – both within and external.

“Self-stigma refers to the negative attitudes, such as internalised shame that people with mental illness have about their own condition. External or public stigma involves discriminatory attitudes that others have over mental illness.

“Often, these are caused by limited understanding in mental health. For those who may not have the (mental health) issue, it is easy to say things or making assumptions. 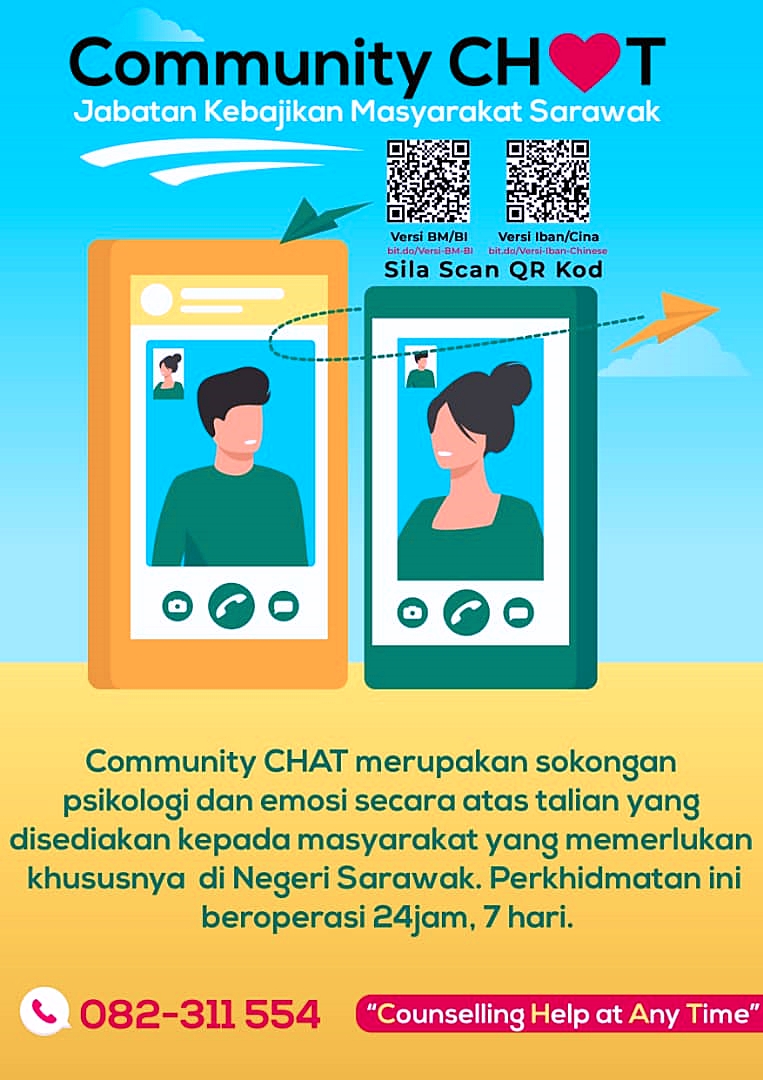 The ‘Community Chat’ is an initiative by JKM Sarawak ‘Community Chat’, acting as an online psychology and emotional support platform that provides help 24/7 to needy members of society.

‘Community Chat’ is an online psychology and emotional support platform by the Welfare Department (JKM) Sarawak, providing help 24/7 to needy members of society.

“We are targeting individuals who are affected from events whether caused by natural disasters (Covid-19 pandemic, floods, fires, landslides, draught or typhoons) or man-made disasters (suicides, murders, accidents, abuse, domestic violence, negligence, rape, pollution, bullying, or the acts of treachery/persecution) or inability to control emotions, thoughts or behaviours (anxiety, fear, panic, depression, anger, or having difficulty to sleep or relax).

“Any person who feel the need to assess their emotional state, can scan the bar code of the Community Chat, and they would be linked to a DASS 21 (Depression Anxiety Stress Scale 21) Test, to determine the level of depression, anxiety and stress based on the three self-report scales.

“There would be officers-in-charge to monitor the result, and if necessary, they would contact the person and conduct checks,” said JKM Miri officer Christine Lau, adding that her office had intervened some cases and refer some of the more serious ones to Miri Hospital’s Psychiatric Unit.

Information about the ‘Community Chat’ can be accessed via this link: https://welfare.sarawak.gov.my/modules/web/pages.php?mod=announcement&sub=announcement_detail&id=66.

Mentari Miri is a community mental health centre, an outpost service by the Health Ministry.

It is located at Rumah Kenyalang on Lot 13, Tanjong Lobang Government Quarters in Miri.

Set up in 2019, the centre provides screening, early assessments and referrals to the psychiatric clinic for walk-in and by-appointment cases.

Dr Bawih said Mentari Miri had to have its operations halted due to the Covid-19 pandemic – it had just reopened this year.

“The feedback received by Mentari Miri has been very positive. The centre provides a community-friendly avenue for them (individuals with mental health issues), especially when they are facing issues.”

Appointments can be made through Mentari Miri’s Facebook Messenger (https://www.facebook.com/mentarimiri), or via WhatsApp on 011-1056 7862.

The daily operating hours are from 8.30am to 4.30pm, Mondays to Fridays, except on public holidays.

Having been run since 2003, the event signifies the global commitment of focusing on suicide prevention.

For 2021, the theme is ‘Creating hope through action’, which highlights the call for collective action in dealing with this serious public health issue – a continuance of last year’s theme, ‘Working together to prevent suicide’.

“The theme of ‘Creating Hope Through Action’ has been both well-considered and timely, with regard to the pertinent call of urging people towards action; that we should all feel equipped, supported and inspired to act as we try to prevent more suicides around the world.

“Our ambitious aim within this new three-year theme is to create a social movement of preventative action, and within this, we require the involvement of everyone,” said IASP in its press release.

It pointed out three particular groups that played a role of key importance:

“By supporting global and national policy changes, raising awareness and reducing stigma and encouraging meaningful and safe conversations around suicide, the IASP believes that, over the next three years as we build upon this theme, strengthen our network and spread our message, we can move towards a world where suicides are not so prevalent,” it stated.

In IASP’s ‘World Suicide Prevention Day 2020 Impact Report’, it mentioned the impact of Covid-19 in its introduction.

“Year 2020 has seen unprecedented change as we adapt to a world altered by the Covid-19 pandemic. Mental health has risen to global priority as the psychosocial implications of social distancing, quarantines and other restrictions become clear.

“At the same time, the same social distancing, quarantines and other restrictions have meant many traditional activities could not happen.
“Innovative alternatives online and outdoors have led to an unprecedented response to both World Suicide Prevention Day and World Mental Health Day,” said the report.

The IASP said for World Suicide Prevention Day 2020, the activities run in connection with the event that were reported to the organisation numbered at over 45 from 20 countries.

One of them was ‘Step Closer: A World Suicide Prevention Day Awareness Film’, which was released with the support from H. Lundbeck A/S. It was an awareness film that aimed to highlight that working together was essential in preventing suicide.

Alongside a press release, the film was available to download and share alongside a social media toolkit that explained the wider message behind the film, and provided a number of suggested social media posts to use during the campaign period from Sept 1 to Oct 10 last year.

With the support of a collaboration with Twitter’s Public Policy Team, ‘Step Closer’ gained 71 million impressions and 33.7 million views on Twitter.

Another campaign, the ‘IASP Light a Candle’, aimed to enable individuals to each light a candle on the eve of World Suicide Prevention Day to reflect, support and remember, and acknowledge survivors of suicide or those lost to suicide.

Last year, a record number of ‘Light a Candle’ posts on social media platforms was recorded, as people all over the world took time to acknowledge a loss or a survivor.

The ‘Let’s TALK & Walk’ was launched on World Suicide Prevention Day 2020, and it is still on-going. It is a daily global campaign meant to encourage open conversations and also to prevent the escalation of small concerns spiralling into bigger issues. Last year, events took place in Fiji, Taiwan, Sri Lanka, Japan, Nigeria, Australia and the US.

Another activity, ‘Cycle Around the Globe 2020’, had a phenomenal turnout with over 201,000 miles cycled in over 40 countries – the equivalent to an incredible eight times of cycling around the globe. The campaign raised US$12,571 in total, and spread global awareness of suicide prevention efforts.