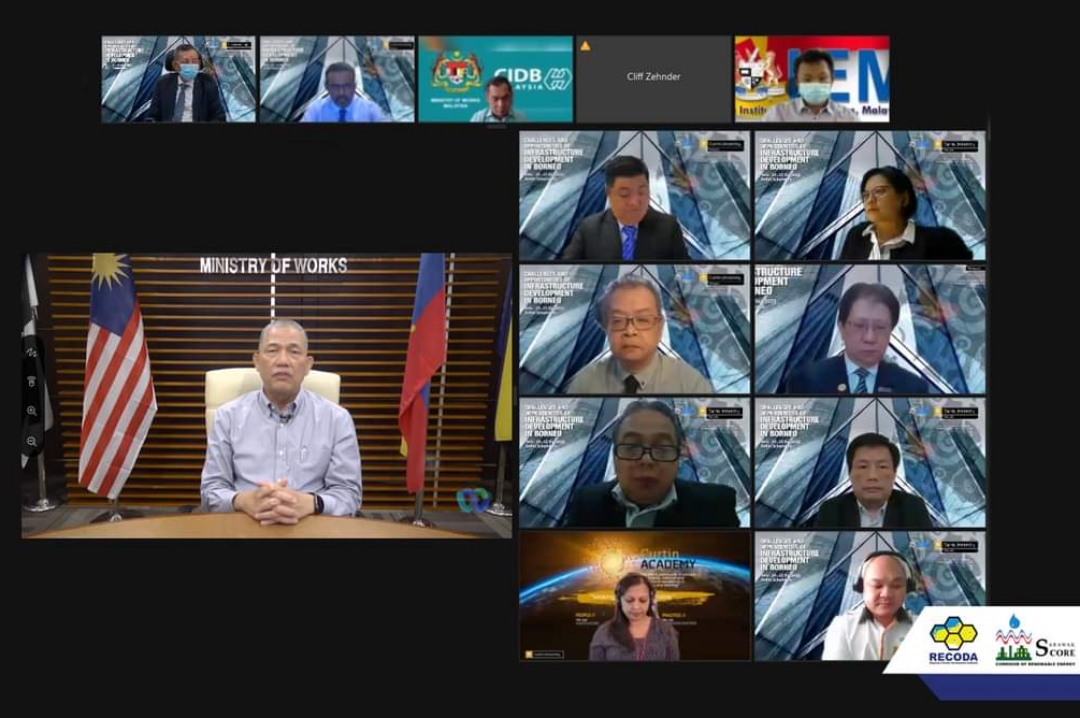 Screenshot of the online symposium which was officiated by Fadilah. Ismawi is at top left of the screen.

He said that in the years to come, more people would be attracted to living and working in Kapit as the property sector and industries will grow.

“Things will change because of new road connectivity and the investments that we can bring in,” he said in the ‘Challenges and Opportunities of Infrastructure Development in Borneo’ online symposium on Friday.

In 2019, it was reported that Indonesian President Joko Widodo officially announced that the country’s new capital city will be inaugurated in 2024.

According to Ismawi, Kapit will be the closest urban centre in Sarawak to the new capital, which may be sited in East Kalimantan.

“The reason Kapit now is no longer the Kapit as we knew before is because Kapit is now accessible by road from Sibu. The idea is that with a masterplan, we can promote the region to the investors in a very systematic manner,” said Ismawi.

He added that a masterplan is also in place to develop Bakun, which is also close in proximity to the border. Among the benefits could be in the form of supplying electricity to the new capital from Sarawak’s dams, including Bakun.

“We are also going to develop a lakeside township as well as an island township and once we have that done in a very systematic manner we will be able to attract potential investors to go to Bakun.

“If you look at other parts of the world, anything to do with lakes has great potential. Tourists like to go to lakes. There are many examples such as Lake Como (in Italy). That is the vision for that area, ” he said.

On another matter, Ismawi also said Recoda had to come up with new implementation models and technical solutions to ensure projects are delivered in a timely manner and within cost, even in the midst of the Covid-19 pandemic.

He explained one key challenge was the timeline, where projects needed to be implemented on a fast-track basis despite the geographical factor where most of the projects are located in rural and remote areas.

He pointed out during this pandemic, challenges in transportation and logistics have constrained access to project sites and the ability to move raw materials.

“We need to be innovative and creative in the way we plan and implement projects because we are not implementing projects on a conventional basis and going through these areas remains very challenging,” Ismawi said.

According to Ismawi again, technical solutions that were adopted to speed up the planning stage include Lidar (Light Detection and Ranging) and Unmanned Aerial Vehicles (UAVs), which are used for survey data collection.

“With this new technology, survey data for project design can be obtained within one or two months faster than conventional detailed ground survey,” he said.

Another innovation is the procurement strategy, where soil investigation (SI) works are included in the main contract.

“With this approach, we were able to roll out many projects within a short period in line with the concept of fast-track implementation, he added.”

Another new implementational model is the Recoda Project Management System (RPMS), of which the key features of this system are its ability to capture the progress of project implementation based on real time, interactive and user-friendly.

“I believe Recoda is the only agency in the state where we conduct the VA labs. We invite the YBs (state representatives), community leaders, relevant government agencies and the technical departments to keep input and feedback to determine the project scope, timeline and estimated cost.”

“What we discovered is that with the feedback of the YBs and community leaders, the local knowledge helped us in fine tuning the scope of our projects,” Ismawi said, adding that the VE labs are subsequently conducted to iron out the detailed engineering design.

Recoda is the implementing agency for infrastructure and socio-economic projects in the Sarawak Corridor of Renewable Energy (SCORE) region, which covers 80% of the state’s area.