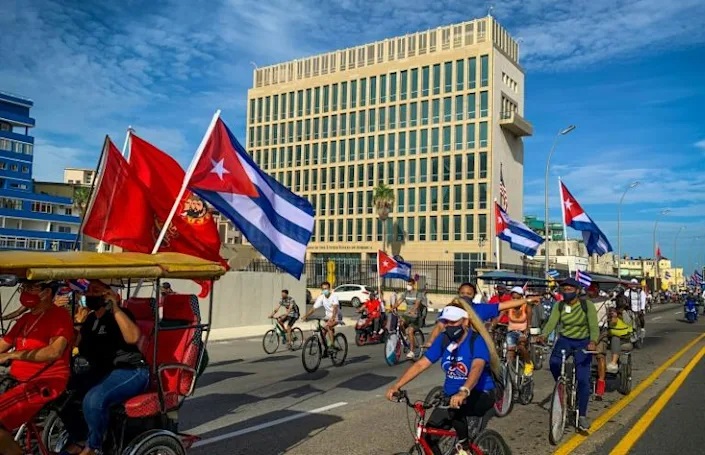 The US Embassy building in Havana, where US diplomats experienced the first apparent “Havana Syndrome” attacks, which some experts attribute to targeted microwaves. – AFP photo

Cuban scientists said Monday there was no evidence for claims of US diplomats coming down with so-called “Havana Syndrome” on the island.

The mysterious affliction is said to cause headaches, nausea and possible brain damage, and is speculated to be caused by electronic weapons possibly wielded by a US rival such as Russia.

Several suspected cases have been reported among US officials and intelligence officers since 2016, first in Cuba, then in China, Germany, Australia, Taiwan and in Washington itself.

But a panel convened by the government of Communist Cuba — 16 experts in a variety of fields and affiliated to the Cuban Academy of Sciences — said the claims were not “scientifically acceptable,” and there was “no scientific evidence of attacks” of this nature on Cuban soil.

“We conclude that the narrative of the ‘mysterious syndrome’ is not scientifically acceptable in any of its components,” the panel said in a report published on Cubadebate, an official news site of the one-party state.

In July, the New Yorker magazine reported there had been dozens of new “Havana Syndrome” cases among US officials in Vienna, Austria since the beginning of 2021.

Last month, US Vice President Kamala Harris delayed a trip to Vietnam after the US embassy in Hanoi reported a possible case, raising concerns she could be a target.

The Cuban expert report said some have accepted “as an axiom that attacks occurred in Havana.”

“However, after four years, no evidence of attacks has appeared,” and “neither the Cuban police, nor the FBI, nor the Royal Canadian Mounted Police have discovered evidence of ‘attacks’ on diplomats in Havana despite intense investigations.”

The alleged incidents remain little understood and have sparked theories they were caused by a weapon that uses focused microwaves, ultrasound, poison or even a reaction to crickets.

The Cuban experts said, “No known form of energy can selectively cause brain damage (with laser-like spatial accuracy) under the conditions described for the alleged incidents in Havana.”

They added most of the symptoms reported could be explained by disease, concluding: “There is no novel syndrome.”

The panel said it would review any new evidence.

The syndrome has almost uniformly affected US officials, but in 2017, Canadian diplomats and their families in Havana reported several cases.

Some people have reported hearing focused, high-pitched or sharp sounds that left them nauseated.

Sometimes the afflicted had bloody noses, headaches or other symptoms resembling a concussion.

The administration of former president Donald Trump pulled US staff out of Havana and expelled Cuban diplomats from Washington, hinting that either the Cuban or Russian government was behind the alleged attacks.

The CIA has created a task force to study the problem. – AFP