Wednesday, December 1
You are at:Home»Business»Demand for gloves remain, but ASPs will decline hereon 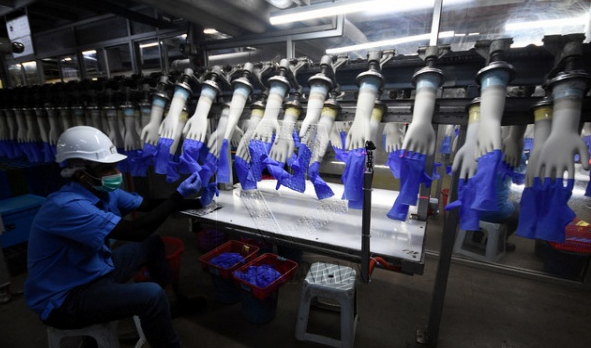 Demand for gloves is unlikely to suffer from a sharp decline although the Covid-19 situation in some of the major glove consuming markets has improved. – Bernama photo

KUCHING: The demand for gloves should sustain and it is unlikely to suffer from a sharp decline but analysts opine that average selling prices (ASPs) will decline from here on out.

According to the research arm of Hong Leong Investment Bank Bhd (HLIB Research), similar to other major viral respiratory diseases, health experts believe that Covid-19 will also, be seasonal with winter dominance; this implies that a resurgence of Covid-19 cases is likely during every winter.

“Furthermore, with Covid-19 potentially becoming an endemic, we reckon that testing activities might become a norm going forward,” HLIB Research said in its gloves sector outlook.

“Therefore, the demand for gloves is unlikely to suffer from a sharp decline although the Covid-19 situation in some of the major glove consuming markets has improved.”

HLIB Research highlighted that as evident from the improved situation in the US and EU, better vaccination coverage can help prevent severe illness and has also resulted in lesser urgency for distributors to replenish inventories back to its usual two to three months level.

The research arm also noted that buyers are currently holding back on purchases, in order to avoid stocking up at high prices where glove makers are expecting ASPs to gradually decline by circa 30 per cent quarter on quarter (q-o-q).

“Hartalega Holdings Bhd (Hartalega) expects ASP to start stabilising in the first quarter of current year 2022 (1QCY22) and based on our own estimates, ASP should reach circa US$30 per thousand pieces by then, which would still be higher versus pre-Covid levels of circa US$22 per thousand pieces.”

“Intco and Bluesail targets to have an installed capacity of 120 billion pieces and 52 billion pieces by 1QCY22 and end-CY21 respectively, implying a capacity growth of 130 per cent and 30 per cent for both in the next three to six months, raising concerns over a potential oversupply situation.”

In the event where incoming supply profoundly outstrips demand, the research arm believed all the glove makers will scale back on their expansion plans and be more disciplined in the commissioning of new lines, so as to not flood the market with excess supplies or put downward pressure on the ASPs, ultimately normalising any imbalance on the demand and supply of rubber gloves.

“Improved compliance would lead to higher cost for the glove makers, which in our view, could cause slight margin compression in the short term as buyers are regaining bargaining power and the rise in costs might not be fully passed on to the buyers.”