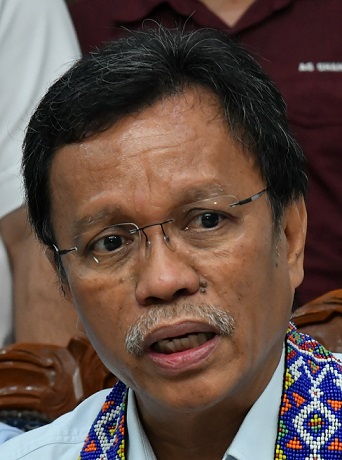 Shafie said this is important so that the rakyat get a true picture of the current status of the pandemic that is plaguing the country.

He added that the true picture of the situation will also act as a reminder to the people to be vigilant in complying with all Standard Operating Procedures (SOP) implemented by the Government.

The Semporna Member of Parliament also opined that the health policy enacted should also put the interests of the people first, not just focus on showing that the government can control the situation.

Shafie in a statement yesterday said that the Government’s preparedness to manage a pandemic depends on accurate and comprehensive data and information.

“On September 1, the Minister of Health Khairy Jamaluddin gave an assurance that the ministry will be more transparent in channeling data on the Covid-19 pandemic. However, in recent times, the data released to the public is much more confusing and no longer as clear as before. This can be seen in the information and data notification issued by the Health Ministry over the past few weeks,” he said.

According to Shafie, it was found that the data and information released to the public were no longer provided in the form of infographics with detailed information as before.

The information was also not channeled on the Health Ministry’s website and social media, instead it was transferred to third party sites namely CovidNow and Github.

The Github site, he said, requires registered access before an individual can obtain and use the available information.

“Without accurate and transparent information, it can create the perception that the Government is trying to politicize the pandemic data to show that the situation is under control,” Shafie claimed.

For example, since last July, the Health Ministry has issued a directive that all new patients infected with Covid 19 must undergo quarantine at home. At the same time, announcement after announcement was made saying that the use of public health facilities was declining, he said.

“Hospitals are said to be less busy than before and that the ICU is also no longer full. Nevertheless, it is feared that this situation does not reflect the real situation as the death and Brought-In-Death (BID) cases are very high compared to the last two months,” Shafie lamented.

According to him, records showed that as of September 11, a total of 239,351 active positive cases were recorded of which 83.3 per cent underwent self-quarantine at home. On the same date a total of 592 deaths were reported, the highest since the outbreak began and this figure includes 88 BID cases.

These data show that pandemic management is not done entirely by the Government and citizens are burdened to make quarantine and self-care at home, he stressed, adding more worrying is that the high number of deaths and BID could be because these people do not have access to healthcare that should be provided by the government.

Shafie urged the government to review and revamp its self-quarantine policy so that individuals who tested positive for Covid-19 can get proper care by the country’s public health system.

“Indirectly, this can prevent more deaths and BIDs in the future and if not done, we are worried that it will further complicate the country’s readiness to reach the endemic phase later,” he said.

At the same time, Shafie also recommended that the public health system be strengthened with more assistance and funds given to enable the hospitals to function to the maximum.

In addition, the government needs to increase the capacity of the national health system to receive more patients so that they can be quarantined in hospitals, instead of at home as is the current situation, he said.

“Another thing to note is about the recent high death rate. On September 11, a total of 592 deaths were recorded which is the highest number of deaths since the Covid-19 outbreak was recorded two years ago.

However, the Health Ministry explained that the record did not reflect the actual death cases as there were many backlog deaths that were reported not on the date of death,” he said.

Shafie said the Health Ministry also stated that out of the 592 cases, only 100 confirmed deaths were due to Covid-19 while others are Covid-19 related deaths in which the patients had no positive record of Covid-19 on the day they passed away.

According to him, the ministry explained that this due to its constraint to conduct a post mortem to determine the true cause of death for the deceased who was never confirmed positive.

“People are asking why these reasons are given only when the country is facing the highest daily death rate. Information such as backlogs and post-mortem constraints for deceased Covid patients should be given in advance.

“This is necessary so that the public knows that the data provided is not yet comprehensive as it depends on other factors such as post mortem results and notification of death cases on the day of the incident,” he stressed.

Previous ArticleCovid-19: 99.7 pct of Sarawak’s 1,983 cases in Category 1, 2
Next Article 16 more One Stop Superstore outlets in West M’sia within 6 months