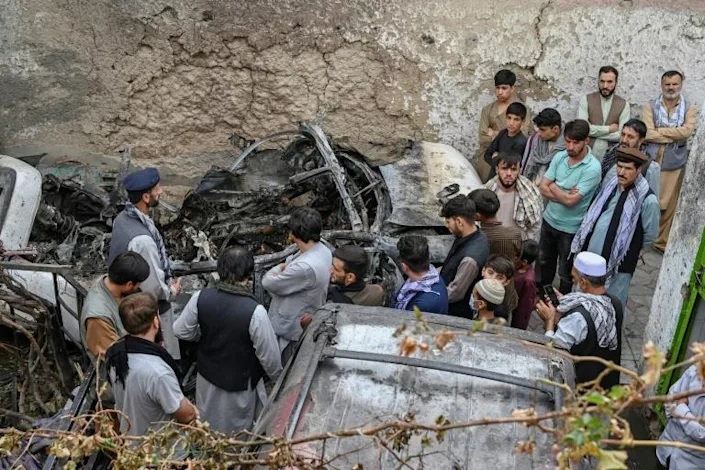 Afghan relatives gather on August 30, 2021 next to a damaged vehicle after a US drone strike that has come under scrutiny. – AFP photo

US Secretary of State Antony Blinken said Tuesday he did not know if a final strike in Afghanistan killed an aid worker rather than an Islamic State militant, saying an investigation was underway.

In the last known hit before US troops ended their 20-year war in Afghanistan, a Reaper drone struck a car in Kabul as the Pentagon said it disrupted a plot by the Islamic State extremist movement for a new attack on the Kabul airport.

But the brother of Ezmarai Ahmadi, a worker for a US-based aid group who was killed, told AFP that 10 family members died. A video investigation by The New York Times later found that Ahmadi had been moving water cannisters, possibly raising unfounded suspicions.

Blinken, asked during testimony at the Senate Foreign Relations Committee whether the strike killed an aid worker, said, “I don’t know because we’re reviewing it.”

“The administration is, of course, reviewing that strike,” Blinken said, promising a “full assessment.”

The Pentagon has also said it is assessing civilian casualties from the strike but has insisted that it disrupted an Islamic State plot.

Blinken was responding to Senator Rand Paul, a rare Republican who has long pushed for an end to the war in Afghanistan and who demanded accountability for the strike.

“I see these pictures of these beautiful children that were killed in the attack,” Paul said.

“If that’s true and not propaganda,” Paul said, “guess what, maybe you’ve created hundreds or thousands of new potential terrorists from bombing the wrong people.”

The strike came days after an attack claimed by Islamic State killed more than 100 Afghans and 13 US troops outside the Kabul airport, where massive crowds were seeking to flee the victorious Taliban.

More than 71,000 Afghan and Pakistani civilians have died directly from the war launched by the United States after the September 11, 2001 attacks, with casualties rising dramatically after then president Donald Trump relaxed rules of engagement in 2017, according to a Brown University study in April. – AFP