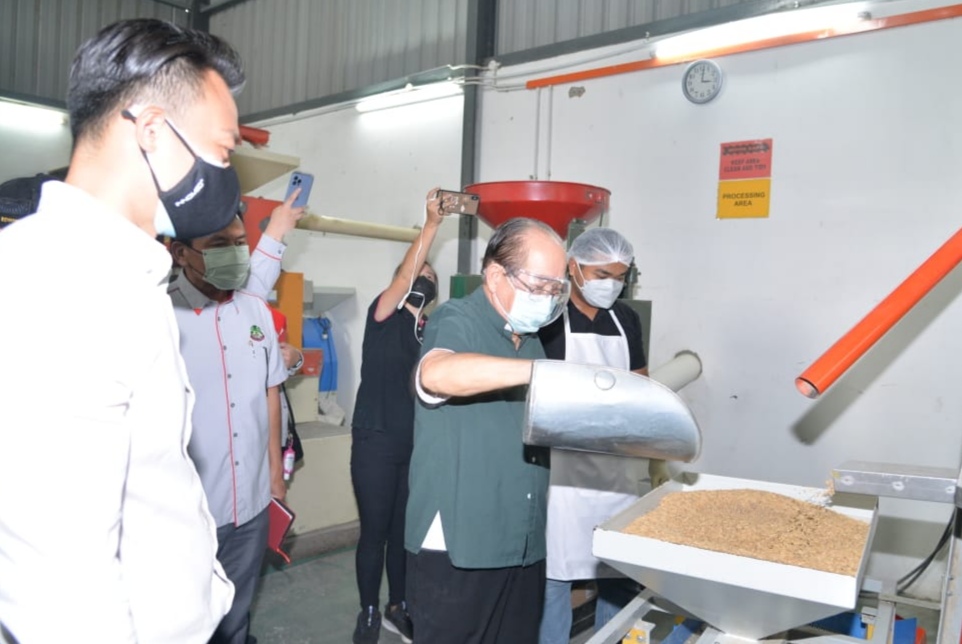 Uggah tries his hand at putting padi seed in a husking machine during the visit.

He said these were being disbursed progressively to the farmers based on the progress of their projects.

Elaborating on the agro fund, Uggah said Chief Minister Datuk Patinggi Abang Johari Tun Openg had allocated a sum of RM100 million to it in the bid to further develop and modernise the state’s agriculture sector.

Uggah pointed out one of the biggest problems in the sector was that the youths in the state were not too keen in farming as a career, and this resulted in the majority of farmers now being those 50 years and above of age.

“So to lure more youths as well, the approach is to modernise it.

“We are looking at precision farming like the fertigation method based on the Internet of Things which will make the sector more trendy with less menial work and with greater returns.

“The agro fund is to assist in this direction, either as providing the starting up capital or for further business growth and expansion,” said Uggah, who is also Minister of Agriculture, Native Land and Regional Development.

He also said there is now so many modern technologies available which the government would bring to the state.

“We are going to set up more green houses, more precision farming areas in our agro parks to be created statewide.”

Uggah said the Rampangi Agriculture Research Station in Rampangi here was one such modern farming model.

“We have a number of young farmers there and they are doing very well,” he added.

Meanwhile, Uggah said the creation of the Sarawak Trade and Tourism Office Singapore (StatoS) would help in the marketing of the state’s agricultural products to Singapore and beyond.

“We are already exporting our tilapia fish, live pork and pork products and others to Singapore.

“I am optimistic Singapore will be our link to more international markets. We want to market all that our farmers plant or rear.

“This will generate income for them and the state,” he said.

The company, involved in exporting Sarawak authentic indigenous rice to Singapore, has an order book of 180 tonnes this year.

Uggah also witnessed the signing of a joint venture agreement between Antares Ventures and Carus Greenwealth to form the Carus Antares Plantation to support the growth of the indigenous rice industry.