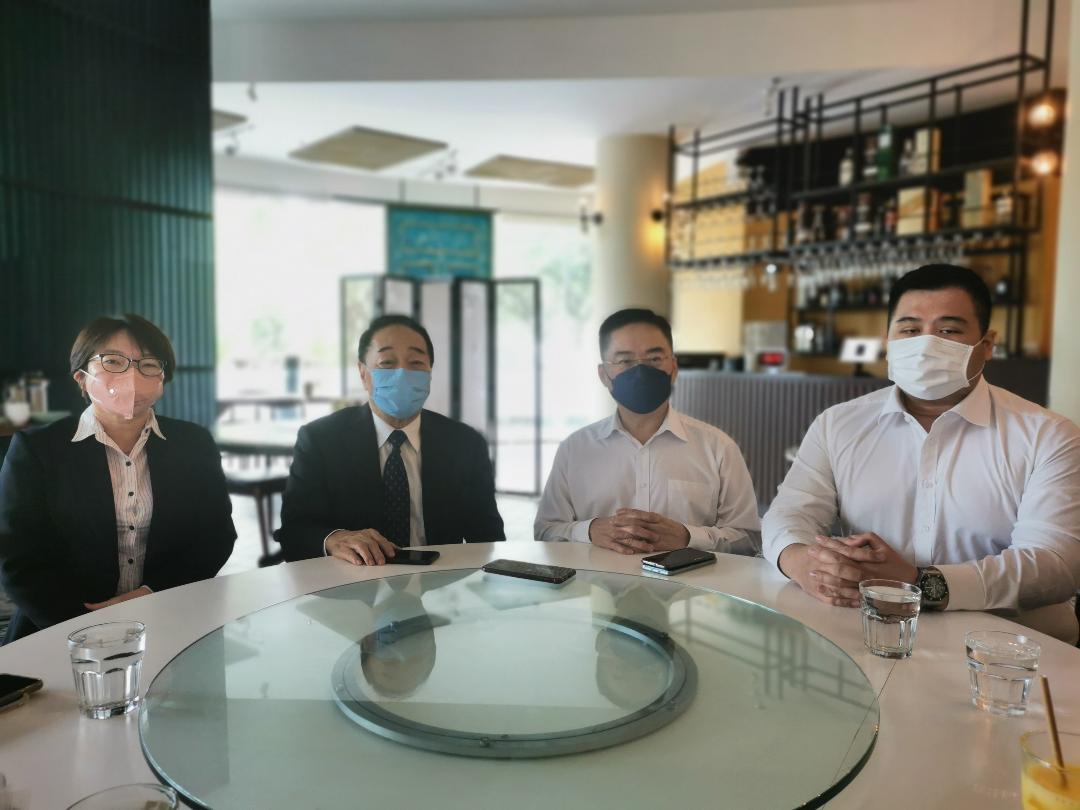 (From left) Hie Ping, Wong, Lo, and Tay are seen at the press conference. – Photo by Philip Wong

SIBU (Sept 15): Parti Sarawak Bersatu (PSB) has called on Sarawakians to break the current chain of State administration by electing a new government.

According to PSB president Dato Sri Wong Soon Koh this is necessary to stand up to the Federal government and take back Sarawak’s autonomy and entitlements under the Malaysia Agreement (MA63).

He said had the true spirit, intent, and terms of MA63 been properly observed, Sarawak would and should be treated as an equal partner with Sabah and Malaya under the Federation.

“To this end, PSB will deliver what the current and previous state governments could not do and have not done in past five decades – to return autonomy to Sarawak as per MA63,” he said in a joint statement issued with the PSB Presidential Council yesterday.

As a purely Sarawakians for Sarawak party, Wong said PSB is free to truly pursue this goal with the singular purpose of looking out for the interests of fellow Sarawakians, without being held to or bogged down by past and current ties and alliances as well as influences from external parties the way the Gabungan Parti Sarawak (GPS) government – with its Barisan Nasional roots – is with Perikatan Nasional (PN), Umno, and Parti Islam Se-Malaysia (PAS).

The Bawang Assam assemblyman said how the GPS government and its predecessors have allowed Sarawak’s autonomy to be continually eroded in the past 50 years shows a pattern of fundamental and repeated failures and disappointments for Sarawak and Sarawakians.

He cited how the late Pehin Sri Adenan Satem put MA63 and the restoration of equal partner status for Sarawak on the official agenda in 2014, voicing decades of grievances felt by Sarawakians under the Federation.

“With control over Sarawak and Sabah’s vast oil and gas resources as well as the lion’s share of the resulting revenues been wrested away under the constitutionally questionable Petroleum Development Act (1974) and State territorial waters being unilaterally shrunk from 12 miles to three miles, these have fundamentally hampered the development of the two states, which has left them being far less developed than their peninsula counterparts and creating sore points of contention,” he stressed.

He said there is clear indication that Sarawakians want issues surrounding MA63 to be properly addressed and not just cosmetically like former prime minister Tun Dr Mahathir Mohamad and Pakatan Harapan’s failed attempt in April 2020 to put through a constitutional amendment to Article 1(2) of the Federal Constitution to reverse the 1976 constitutional amendment that relegated Sabah and Sarawak’s special status to that equal to other states.

“Political parties and leaders in both East and West Malaysia recognise that it would be folly to ignore the Sarawak autonomy and MA63 issues.

“This was certainly the case when then Prime Minister (Datuk Seri) Najib Abdul Razak agreed to first open negotiations with Adenan on MA63, followed by Dr Mahathir Mohamad stating his administration would also seek restoration of the rights of Sarawak and Sabah under MA63.

“The anti-federalism sentiment has garnered enough attention from the previous Pakatan Harapan coalition to make one of the five pillars of their manifesto dedicated to returning Sabah and Sarawak to the status accorded by the MA63,” said Wong.

He pointed out that in April, then prime minister Tan Sri Muhyiddin Yassin called Sarawak a region to set it apart from being just a state and made public assurances that claims by Sarawak would be considered fairly and equitably in accordance with the Federal Constitution and the spirit of MA63.

According to him, after over half a century of being unequally treated under the Federation, Sarawak’s interests and population being marginalised, rampant corruption and graft continuing to fester within the nation, and the overall mismanagement and failures of its current and previous governments, Sarawak’s economy and infrastructure are fundamentally lagging, underdeveloped, and lacking in critical human resources.

He said movements such as Parti Bumi Kenyalang (PBK) are counting on calls for independence to garner voter interest and support.

“However, such sentiment will not carry such separatist rhetoric very far when there is a lack of forward planning and policy beyond independence,” he pointed out.

According to Wong, this would more likely splinter and factionalise voter interest and in turn fragmentise support of opposition parties and disable any real challenge to the ruling government.

“This would play into hands of the GPS government, who after all comes from a long legacy of past ruling parties that have deployed divide and rule tactics to diminish and dismantle support for opposing parties by keeping them and voters disunified,” he said.

He pointed to a more conciliatory approach by continuing what Adenan started in seeking to reinstate Sarawak as a true equal partner under the Federation and not just cosmetically.

“This would mean seeking to reform the Federation through conventional democratic means.

“The difference now being with the political turmoil and discord plaguing Malaya and with marginal majority in Federal government, this has bolstered Sarawak’s bargaining power which enables it to be more assertive on its rights and claims on greater autonomy for the long-term benefits of the State and its people,” he said.

Wong stressed Sarawak must strive for the true and bona fide reinstatement of equal partnership and re-empowerment of autonomy over its material affairs pursuant to MA63.

“It will require greater cooperation with Malaya and a call to shared nationhood. It would be an exercise that must rise above derisive and competing interests between East and West Malaysia in order to align and harmonising them so as to further national integration,” he added.