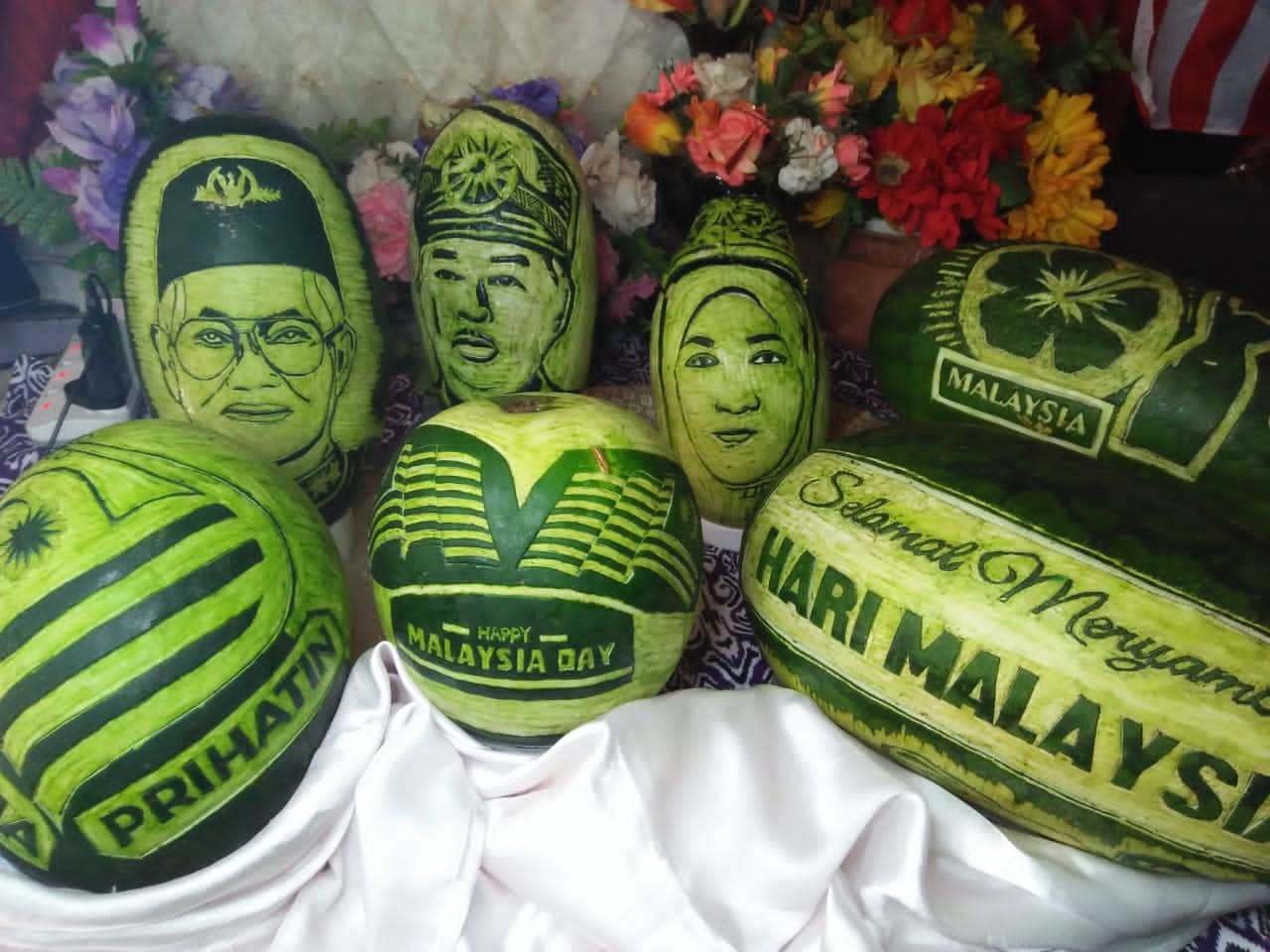 THIS Malaysia Day has afforded another opportunity for Chef Muhammad Azharuddin Pulut to showcase his fruit-carving skills.

The 35-year-old had recently commemorated National Day by carving the portraits of the country’s first prime minister Tunku Abdul Rahman Putra Al-Haj, and current premier Datuk Seri Ismail Sabri Yaakob, on the outer skin of two watermelons, and decided to do the same to mark the founding of the nation.

This time, Azharuddin challenged himself to carve not just two, but nine watermelons – five of important national and state figures, and four Malaysia Day-themed ones.

“It was really a challenge. This time, I chose to carve our Yang di-Pertuan Agong and Raja Permaisuri Agong, our Head of State Tun Pehin Sri Abdul Taib Mahmud, Chief Minister Datuk Patinggi Abang Johari Tun Openg, and not to forget our beloved Jepak assemblyman Datuk Talib Zulpilip,” he said.

Naming Chef Danielle Barresi of Italy as his idol in the field of fruit carving, Azharuddin said his endeavour was a personal effort to express his pride of being a Malaysian and to celebrate the two historic dates under the new norm.

“Due to Covid-19, we are unable to celebrate National Day and Malaysia Day like before but under the standard operating procedures set by the government and Ministry of Health.

“So this is my way of celebrating the two days,” he said.

According to him, he started his Malaysia Day project on Sept 5 as he knew it would require time to complete before Sept 16.

“I would start working on the portraits from 11am to 2pm and then take a break before continuing from 7pm to 9pm. Normally it would take me anywhere from two to four hours per day to complete one, but it all depends on the size of the fruit and the carving techniques needed,” he said. 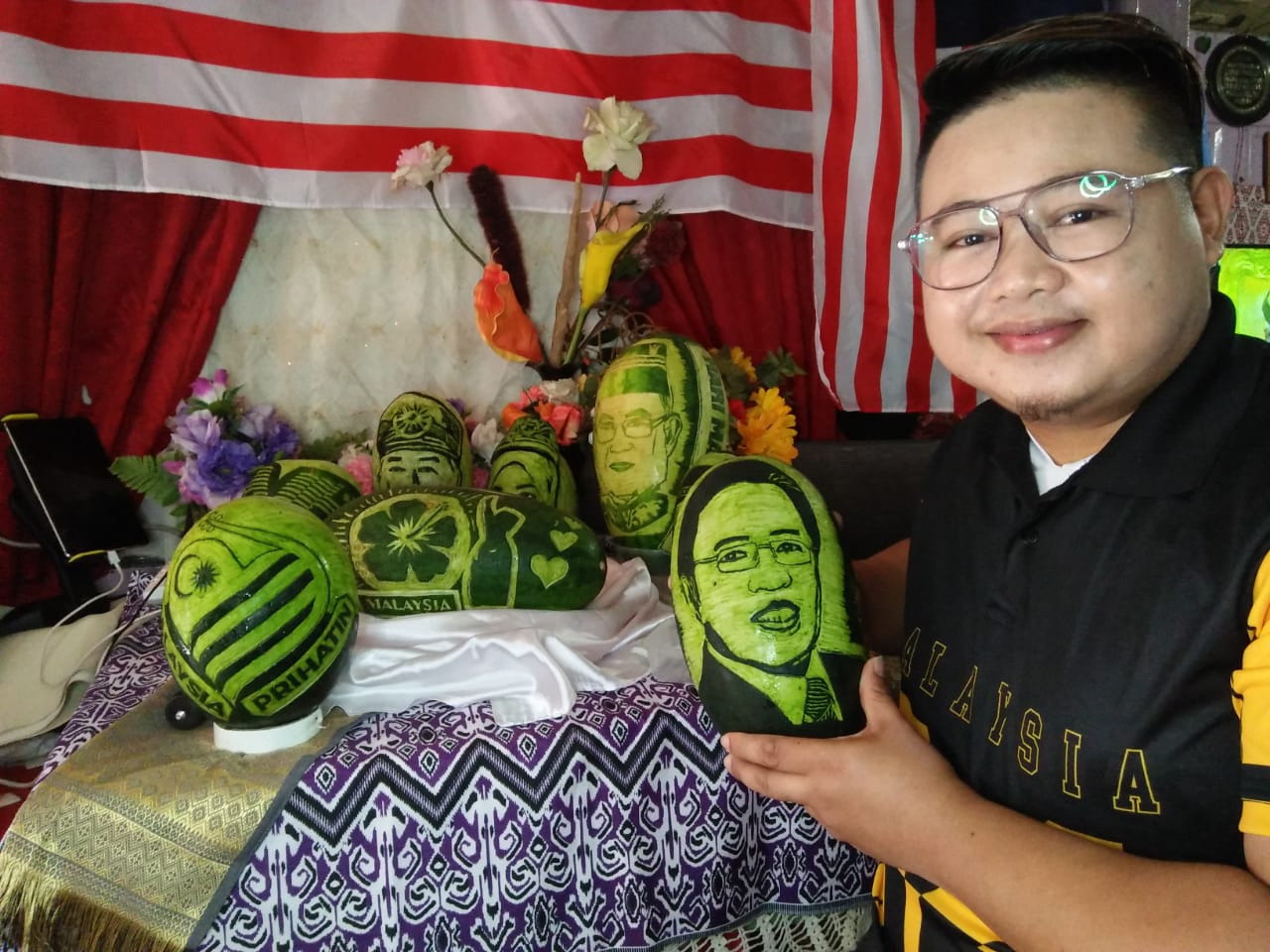 Working out of a temporary workshop at home, Azharuddin said extra focus was needed to ensure the portraits resembled the figures he chose to carve as closely and as detailed as possible.

“For this project, I used my two garnishing knives and the blades had to be in tip-top condition. Similar to my previous project, the most difficult (to carve) were the eyes and also the crown of the Raja Permaisuri Agong,” he said.

On what inspired him to take up fruit-carving, the chef said he used to watch YouTube videos on fruit and vegetable carving, and later gained more experience on carving techniques from fellow chefs during stints at various hotels.

“I learned from observation. What is important is that one needs to have the ‘soul’ of art and imagination. It is always good to try new things in life,” he enthused.

Azharuddin also explained that he picked watermelons as his choice of fruit to carve on as they are more durable compared to others he had used before such as apples, carrots, milk melons and yellow pumpkins.

The type of fruit used for a particular project is very important and must be of high quality, he pointed out.

“Personally, I like challenges in life; if I succeed and accomplish my work, it gives me huge satisfaction even though I am new to this field of art. This artwork means a lot to me as it is a way for me to express the spirit of patriotism and unity in Malaysia.”

As an added personal ‘bonus’, Azharuddin said he chose to do one final piece of fruit portrait – that of his father, Pulut Bunsu, who turned 61 on Sept 12 – as a birthday gift.

“It took me exactly two hours that day to complete it. Everything went smoothly as planned and the last fruit motivated me even more. As a Sarawakian, I want to show that if you put your mind to it, anything is possible.”