Friday, May 27
You are at:Home»Columns»Just another point of view»Of mooncakes, ghost festivals and school fun fairs 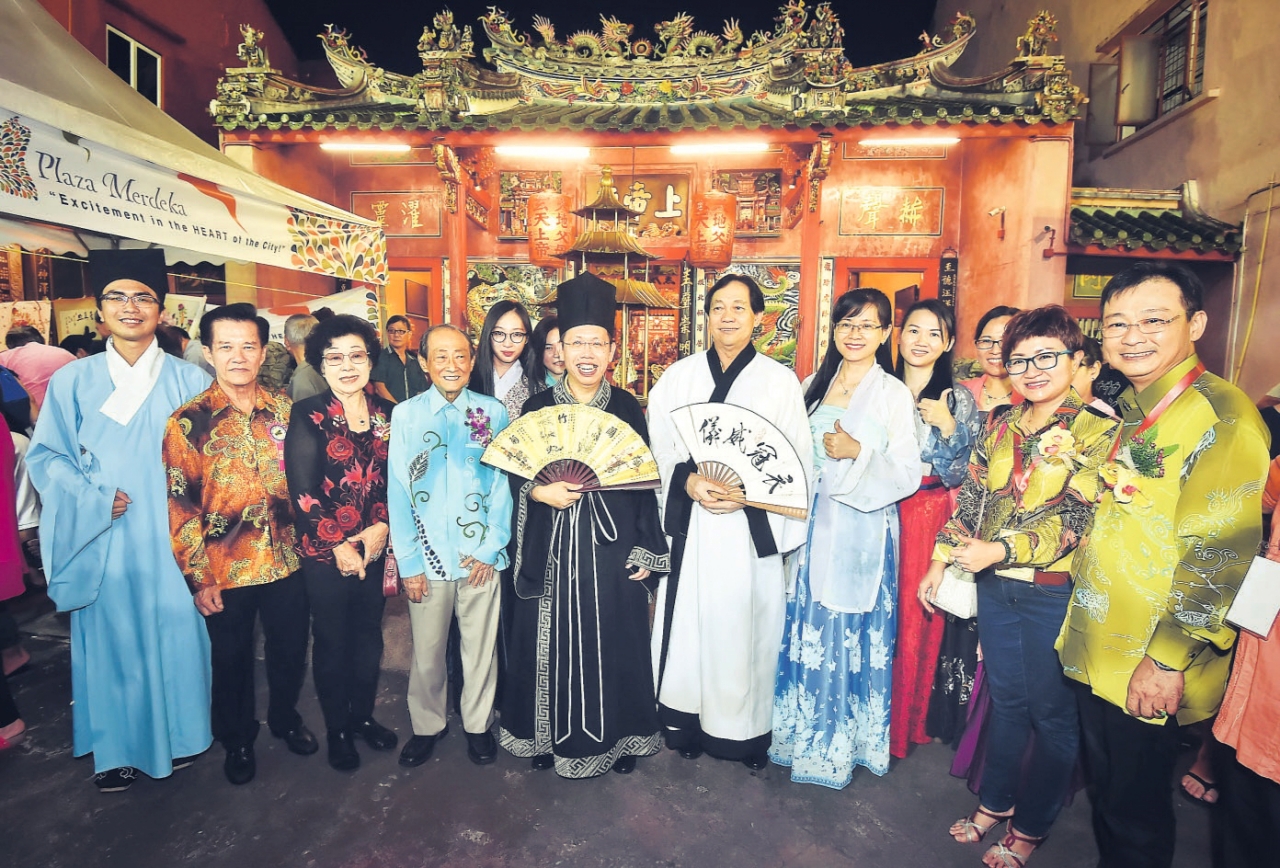 FOR the Chinese everywhere, the seventh and eighth month of the Lunar Year are always particularly festive – they would hold the annual Hungry Ghost Festival on the 15th day of the seventh month, and exactly a month after that, the Mooncake Festival.

Both are widely celebrated throughout the world and Chinatowns worldwide would all be lit up; the festive moods would be much elevated and much merry-making would be going on.

Traditions passed down through the generations have generally determined that for the entire seventh month (usually falling between July and August), the Chinese would abstain from initiating any joyous occasion – betrothals, weddings and certainly, the starting of any new business, moving house, house-warming parties and suchlike are all verboten.

Indeed when I was a young boy, we were all warned not to go out after sunset and that we should stay home during the entire ‘ghostly’ month, lest we would be meet with some supernatural sightings or worse – encounters! We were definitely told not to tell ghost stories among ourselves, and to abstain from making any loud noises at night.

On nights that I couldn’t avoid cycling to school for my special compulsory extra-curricular programmes, I was always reminded not to make any comment or indeed, to avoid even passing any of the many lit-up joss sticks, candles, flags and offerings that were being planted along the side of the roads – especially at the many road junctions.

Sometimes I’d see folk burning ‘Hell Money’ or reciting prayers as well. There was virtually nothing I could do except to cycle faster away from the site had I encountered any.

I had also seen the many food and other offerings being donated to be displayed at the old Chinese temple at Carpenter Street, where the popular Lau Ya Keng food stalls are sited. A day or two prior to the actual night, the entire area would be cleared and cordoned off and workers and devotees could be seen carrying in large loads of all kinds of stuffs – culminating in cooked food on the actual day itself. There would be whole roasted suckling pigs stuck in spits, cooked chickens and ducks and cakes of all shapes and sizes and food galore!

In years gone by, these donations would fill up the venue rather quickly and they would all be stacked on top of each other, on makeshift tables and chairs; later, they would construct scaffolds to hold them.

On the actual night itself at midnight, it was a free-for-all as everyone and anyone would join in the fun to ‘raid’ the goodies and take whatever they had wanted. Sometime in the 1970s and 1980s, it was rumoured that groups of different local gangs were involved. However, since around the 2000s, the manner of disposal of these goodies has become more organised, and they would sell raffle tickets as well as auction them off.

In its earlier incarnation together with Dato Goh Leng Chua, we were involved with the early beginnings of the Kuching Intercultural Mooncake Festival – an event lasting a week, which would always culminated in the final night being the actual ‘Mooncake Night itself’, the 15th day of the eighth month on the Chinese Lunar Calendar. In those days, YB Datuk Lily Yong and YB Datuk Abdul Rahman were the patrons; with Chinese Kapitan Ko Wai Neng being head organiser of the food and fun fairs along Carpenter Street and Ewe Hai Street.

There were over 100 stalls and structures and pavilions temporarily erected for all sorts of cakes, snacks, food and drinks; cultural exhibitions and shows and special promotions of products – in fact, very much a mini ‘Kuching Food Festival’ in itself.

The name itself meant that both the Chinese folk from this side of the Sarawak River, the traders and merchants of Main Bazaar, Gambier Road, India Street, Carpenter Street and Ewe Hai Street right up to Jalan Padungan, would co-mingle and interact with the Malays from across the river at the ‘kampongs’ (villages) lining the Astana Negeri side of the river.

The then-Head of State, TYT Tun Abang Muhammad Salahuddin Abang Barieng would always make it a point to pay us a visit.

It was a great success and we had enormous support – it was estimated that at its peak, up to 70,000 people had attended! We hope to see its triumphant return in a year or two after this horrendous coronavirus pandemic has lessened.

I was told that the Society Atelier Sarawak, together with the Ministry of Tourism, Arts and Culture, Kuching City South Council (MBKS) and Culinary Heritage and Arts Society Sarawak (CHASS) had, in June, started a bid for Kuching to be classified as a ‘Creative City of Gastronomy’ under Unesco Creative Cities Network (UCCN) – the result of which would only be known at the end of the year. It would be another feather in the cap for us all, and we can expect to see many more culinary-based events and activities being lined up to be held in Kuching in the future!

I say ‘good luck and all the best’ to all those at the ministry of Tourism, MBKS and the other parties concerned.

Mooncake Festival was also a fun time for us as children. I remember in the 1960s when our elders would buy those cheap ‘made-in-China’ lanterns for us to carry and parade around the garden on the night itself; they’d cut the cakes and brew Chinese tea (soft drinks for the kids) and sit out in the patio or veranda and gaze at the full moon as it lit up the entire home outside. Our cakes came almost exclusively from one of the oldest mooncake outfit in town, Chin Hian Tsia at Jalan Padungan – they are still operating, and I understand that the family has branched out into a few other outlets. One of them, an ex-classmate of mine, had passed on a couple of years ago. Still, the family business carries on, and is still one of the best in the city.

My school, St Thomas’, would always hold its food and fun fair in October when all the year-end examinations had been over and done with. My memories of the ones I had personally participated in were all extremely good; these were in the days and years between 1960 and 1966.

The food and fun fair would always be held at the Sarawak Union Club (now the Aurora Plaza, where Sarawak Tourism Board has its offices) and the St Thomas’ football field. It would be over two nights, a weekend. My mum would always have a stall on the ground floor of the Club and she would sell an Ong family’s secret ‘mee’ (noodle) recipe – a soupy Hokkien Mee, somewhat a cross between Penang Hay Mee and a local Nyonya Bone-Broth Mee. Parents and students would form a long queue just to have her delicious specialty. There’d be many other food delicacies, lucky draws, ‘fishing rod tents’, ‘Tombola’ (a form of raffle) and many more. One year, there was a memorable performance by Janice Wee and her band on a makeshift stage at the football pitch, and the cat-calls and whistles were very boisterous and loud as she had worn a miniskirt – a rarity in those early days – but of course, they were applauding her singing too.

Looking back on those past fun fairs and the good times that we had, my memories are filled with love and wonder – there was no racial tension of any kind; we were all brothers and sisters under the sun; not a single time was there any ‘illegal’ finding of either drugs or underage drinking; and indeed, there were no fist-fights, not even raised voices or quarrels and arguments were ever heard!

The only misdemeanour that a school prefect or an adult had discovered was a student stealing a smoke behind the public toilets situated behind the building. I really take my hat off to those ‘wonder years’ – we’re all incredibly blessed having been brought up in such idyllic circumstances.

Throughout the years having hosted many overseas visitors and friends who have come to Kuching for the very first time, I have always felt proud and extremely grateful when they had, at the end of their visit, commented that they had seldom, if ever, been in such a nice, peaceful city where the people were friendly, gracious and most of all, kind and honest.

I’d say a silent and grateful Amen to that!