Wednesday, December 1
You are at:Home»Columns»Uncle DI»Lessons from the Pacific War 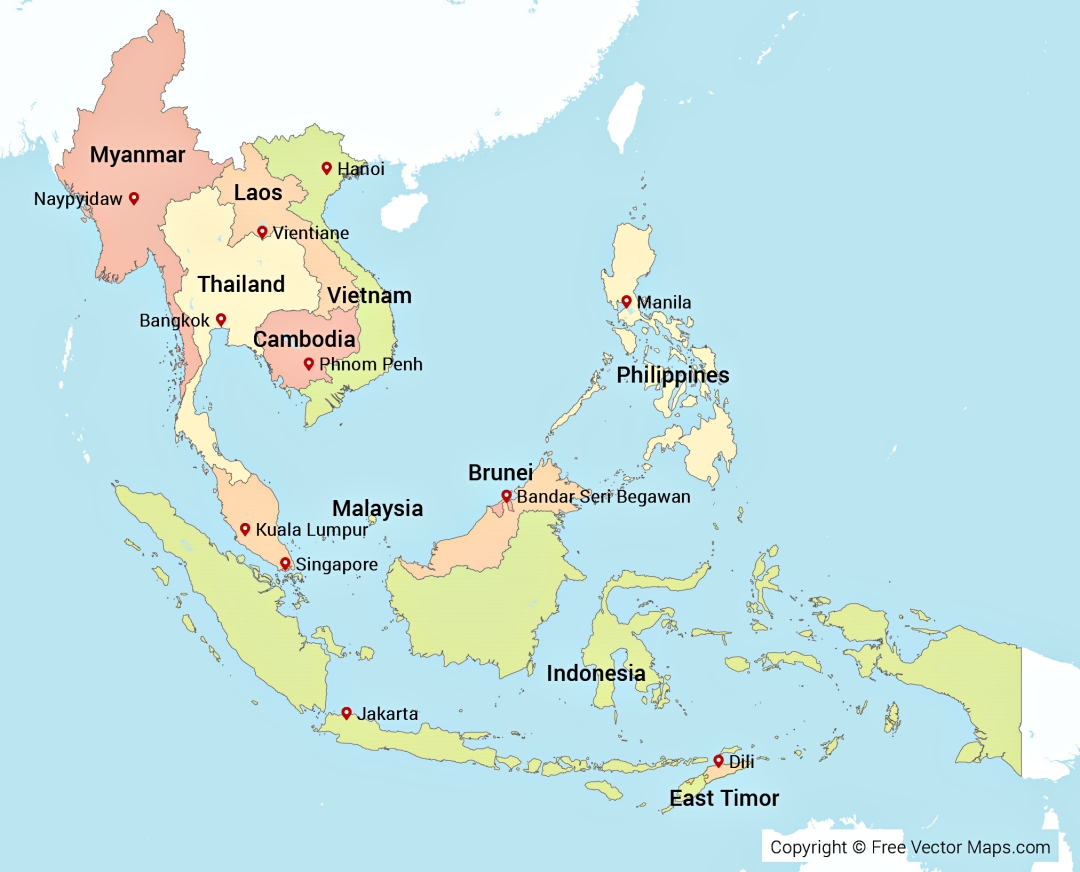 Illustration shows the map of South East Asia: ‘War has taught the colonised people how to seek independence for their countries from the colonial powers’. — Photo from https://freevectormaps.com

THE fighting in this part of Asia during the Second World War (WWII from 1939 to 1945) was also known as the ‘Pacific War’, or ‘Perang Jepun’ (Japanese War).

It would have gone on for several more years had not the Americans dropped two atomic bombs over the Japanese cities of Hiroshima and Nagasaki on Aug 6 and 9 of 1945, respectively. To avoid more deaths and destruction, the Emperor of Japan wisely sued for peace – his forces had to surrender to the Allies, rather abruptly.

While I’m writing this, I remember what a friend said: “The Japanese did not lose the war, man – look at what are on your roads, where are the cars made?”

There are several other outcomes besides those vehicles, mate.
Here’s a fleeting account of the effects of the war. In certain parts of the world, some good came out of that war. I am not saying that war as such is good; not at all.

The whole Indian subcontinent was ruled by the English East India Company from the early 17th century till the middle of 19th century. In 1858, the British Government took over the powers of taxing and administration from the chartered company and ruled India as a colony until 1947.

After the WWII, the nationalist movement in India intensified their agitation for political independence from Great Britain. In 1947, two separate sovereign nations were born: the Republic of India, and the Islamic Republic of Pakistan.

Burma was part of the British India. The nationalists had fought for independence for Burma, alongside the Allies, first against the Japanese, but in the end, it was the Japanese who helped them gain independence.

At the end of the 16th century, the United Dutch East Indies Company (VOC) had arrived in the archipelago to monopolise the trade in spices and when the VOC went bankrupt, the Dutch Government took possession of the company’s assets and started ruling the vast archipelago as a colony.

The Netherlands East Indies were occupied by the Japanese forces during the Pacific War. Towards the end of that war, the Japanese politicians promised the Indonesians independence if they would collaborate with them to fight the Dutch.

Indonesian nationalists led by Sukarno and Mohammad Hatta declared the whole of the Dutch territories as the Republic of Indonesia, on Aug 17, 1945.

One would have expected that the trend of decolonisation would logically continue in respect of the rest of the countries still under colonial rule, but it did not occur.

How does one reconcile the two British policies in respect of decolonisation when, upon becoming Prime Minister of Britain, Winston Churchill had declared: “I have not become the King’s minister to preside over the dissolution of the British Empire!”

Or when the British ‘East of Suez’ policy had allowed Britain to ease out of the East so that its colonies could achieve self-government provided that they remained members of the British Commonwealth of Nations?

How does one reconcile these equivocal British policies in the Malay Peninsula where the British government wanted to create another colony out of the various Malay States and the Straits Settlements?

Their justification was that the challenge posed by the Communists for the control of Malaya was too great that it would require British arms and money to defeat the communists.

However, when the intention was clear that the various Sultans were going to lose power and authority except in matters relating to the religion of Islam, the Malays were forced to act. So aroused were their feelings that from the various non-governmental organisations (NGOs) were formed; a political party called the Malay National Organisation (Umno) to oppose the formation of the Union. As a result, the Union did not materialise – instead, the Federation of Malaya was formed out of the Federated and the Unfederated Malay States and the Straits Settlements of Penang and Malacca, minus Singapore. This federation was granted the independence by Britain on Aug 31, 1957.

Cession of Sarawak to Britain

About the same time, the fate of the Brooke Rajah of Sarawak was in the balance. It had been badly affected by the war. The economic conditions, compounded by the problem of succession in the Rajah’s family, were the main reasons why Rajah Vyner Brooke decided to cede Sarawak to Great Britain in July 1946.

In my opinion, the new colonial government was a blessing in disguise for Sarawak. The government implemented a set of good policies. More schools were opened and more teachers were trained. Member countries in the Commonwealth helped out by providing places in their colleges and universities for the young people from Sarawak.

The people were taught how to run cooperatives of all kinds. Exploitation of forest products for exports was allowed. Various government departments were created to implement schemes for the production of cash crops such as rice, pepper, and rubber. Farmers were trained on modern farming. Local authorities were created and elections were held to elect councillors to manage the affairs of each district.

All these were planned and implemented within a space of 17 years – with varying success.

War is not necessary

Above are some of the side benefits or unintended consequences of the Pacific War. The war has also taught us a lesson in terms of the invincibility of Singapore. The great fortress fell quickly to the Japanese Imperial Forces. But for years later, the war ended in shock and horror for the Japanese. They have since learnt that oil and timber can be obtained by making business deals with the countries that possess them.

War is a colossal waste of lives, materials and effort – I hope the world’s nations would have learnt such lesson.

Previous ArticleMermaids, mystery and mayhem
Next Article Appreciating beauty of flora from the top