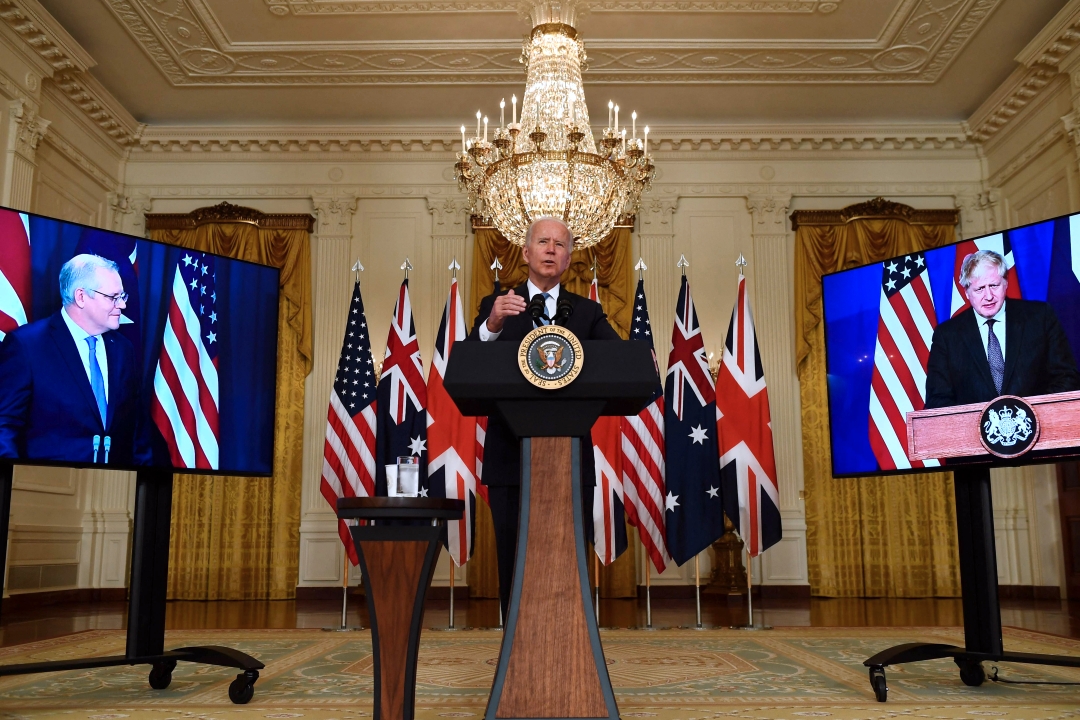 US President Joe Biden participates in a virtual press conference on national security with British Prime Minister Boris Johnson (right) and Australian Prime Minister Scott Morrison (left) in the East Room of the White House in Washington, DC, the US. On Sept 15, the three nations announced their AUKUS alliance. — AFP photo

PUT yourself in the shoes of a bridegroom when, on the wedding day, the bride did not turn up!

“No, Dad, I don’t want to marry him now,” declared the girl.

Apparently, the bride had some reason why she thought the marriage would not work. The damage to the relationship between the members of the respective families was of secondary importance to her and she could not care less what the aunties would say. Her primary interest was her own happiness in marriage. That prevailed over the happiness of the others.

This, more or less, sums up the situation in the relationship between France and Australia over the cancelled submarine deal.

I do not blame France for being furious with Australia over the loss of the multi-billion-dollar deal. That loss is not as important as the loss of face and prestige. Worse still, Australia’s mind-change gives the impression – not necessarily the reality – that the submarines built with French technology are not good enough for Australia’s purpose; it’s not serving its strategic national interests.

As the purchaser, Australia has the right to pick the types of submarines that it needs. If there are better alternatives to the French-built vessels, why not opt for those instead? The question of damages, if there had been a breach of contract, is another matter.

The two countries are mature enough to sort out a comparatively smaller issue given time and space.

I don’t think they would go to war on account of one business deal that has gone sour. There are many other areas of cooperation in which the Australians and the French, and also the Americans, can get along well; for example, tackling the impact of climate change on the Pacific island nations situated at Australia’s backyard.

There is a keen competition between China and USA and its allies for influence over those nations facing the danger from rising sea levels.

China and the AUKUS (Australia, the UK and USA) should think in terms of saving these countries from sinking into the sea. No submarine would be big enough to accommodate these people. Find or create new islands high enough to place these peoples in safely.

As China has the technology to build islands out of the South China Sea, why can’t all these countries jointly fund the creation of new islands in Polynesia?

The problem with the submarine project would not have surfaced had not Australia, the UK and USA joined hands to enable Australia acquire the technology on how to handle a fleet of nuclear-powered submarines.

Collaboration between those in AUKUS is not something new – they were comrades at arms during the Second World War and in other areas of conflict.

Why is it necessary to disclose the relationship at this point of the time? It appears that the tripartite alliance wishes to assume its leadership role in terms of dealing with the rise of China in this part of the world, and in ensuring that the South China Sea would remain a vital trade route for every nation that uses it without let or hindrance.

Given the current estranged China-USA relations, it’s natural that China has reacted with anger over Australia’s preference for USA-made submarines, prowling the vital trade route, a large part of which has been claimed by China as its own territorial domain, while ignoring the rights of other littoral countries there.

What is Malaysia worried about?

One of them is our own beloved country, Malaysia. Malaysia considers itself a friend to all the AUKUS countries and China. So when friends do not see eye to eye, another friend is worried about the possibility of a fist fight. Of course, these countries – all countries, come to that – declare that all their intentions are peaceful and beneficial to mankind, but it does look as if these four countries were preparing for war.

Our fear is that there may be others who may join in the fray on each side later on; thus, compounding the tension in this region. The Philippines, Vietnam, Japan, South Korea and Taiwan are all weighing the pros and the cons of their next respective moves. The Philippines has indicated its favour of Australia acquiring the American subs, while the other countries are keeping their cards close to the chest.

If a war – touch wood – should start, the most likely theatre would be in the South China Sea. And Malaysia has sovereign territorial rights over certain part of that sea.

To take sides – in our case, with whom – with the ones having existing defence arrangements, or with those who are our important trading partners?

In the circumstances, as a member of Asean, Malaysia should propose to our Asean partners to take a collective stand now.

At the same time, Malaysia should immediately initiate an international conference to discuss common position of Asean vis-a-vis China and the AUKUS. Our simple request — we want the big powers to recognise this part of the world as ‘a zone of peace, freedom and neutrality’.

If the big boys must fight at all, do it elsewhere, please!

In the light of the latest development – the changing dynamics in the Asia-Pacific region – all countries within this Pacific Rim should speak with one voice: telling the big powers that we need peace badly in order to develop and prosper.

The last thing we need is another war, conventional or otherwise — not even involving the use of bows and arrows!