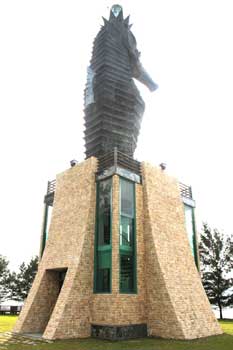 A lighthouse with a statue of a seahorse in Miri.

THIS species of fish bears the taxonomic name ‘Hippocampus’ derived from the Greek ‘hippos’ (horse) and ‘kampos’ meaning monster. In Greek mythology, they were considered to be the progeny of giant creatures with horses’ heads and fish tails that pulled the chariot of the underwater god, Poseidon.

Mainly located in shallow tropical and temperate waters from roughly 45 degrees north to 45 degrees south of the Equator, seahorses are found mostly in seagrass (Zostera marina) but also in estuaries, on coral reefs and in mangrove swamps.

Currently, worldwide, 56 species of seahorse have been identified, 13 of which are found in Malaysian waters. Seven species of Malaysian seahorse, I shall attempt to describe from the largest to the smallest. They date back to the Lower Miocene period of geological history, approximately 23 million years ago, when shallower water, owing to the tectonic uplift of land, allowed the expansion of seagrass habitats which act as camouflage.

The Malaysian project leader of Save our Seahorses Malaysia, an eminent marine biologist, Adam Lim, has aptly described them thus, “There isn’t another species like the seahorse, made up of different animal-like compositions. It has the head of a horse, the curtailed tail of a monkey, a kangaroo-like pouch and the eyes of a chameleon, all of which grant it camouflage abilities.”

Male seahorses are very territorial and live within a 0.5-square metre territory, whilst the females roam in an area of 1.5 square metres. They breathe through gills and their long necks and thin snouts allow them to suck up food like vacuum cleaners when probing into crevices.

Feeding mostly on small crustaceans and Mysid shrimps; without a stomach, they eat 30 to 50 times per day amounting to an intake of 3,000 pieces. With chameleon-like eyes, swivelling independently, they are formidable hunters.

They are quite distinct from other fish species, in that they have an exoskeleton composed of hard bony, ring-like plates which are fixed together with a fleshy covering. Their prehensile tails take a firm grip onto eelgrass or soft corals preventing them being swept away by strong currents.

They are very poor swimmers and rely on their dorsal fins beating at 30 to 70 times per second for propulsion, using their pectoral fins, mounted on either side of their heads and behind their eyes, as stabilisers and for steering purposes. Their colourings change, chameleon-like, according to the habitat in which they are located. Communication with each other is by loud clicking sounds.

Some species are monogamous with the females laying her eggs from her ovipositor into a bodily pouch attached to the front of the males. The male seahorse is the only creature to have a reversed pregnancy, for he opens his pouch to receive the female’s eggs and then he self-fertilises them. The eggs are embodied in the pouch wall and surrounded by a sponge-like tissue which allows the male to supply them with prolactin, a hormone generating milk production.

Gestation times vary between two and four weeks and the number of fry varies from 100 to 1,000 plus. Fewer than 0.5 per cent of these will reach adulthood as they are susceptible to both predators and ocean currents sweeping them away from the feeding grounds of their birth.

The great seahorse or Kellogg’s seahorse is found in coral rich areas and again in shallow waters although it has been found at depths of 100 metres plus. Their tails account for 57 per cent of their bodily length. Their heads are crown-like and their bodily shape fits precisely what a seahorse should look like in one’s imagination. Sadly, there has been a rapid decline of this species, by 50 to 60 per cent in Asiatic waters and now they are declared as vulnerable.

The estuary, yellow or spotted seahorse, is known in Bahasa Malaysia as ‘kuda laut’. It is found mostly in mangrove swamps lining estuaries and reaches between 17 and 30cm in length. Its body shape is without spines and a larger head compared to its length, sporting a short, thick snout. 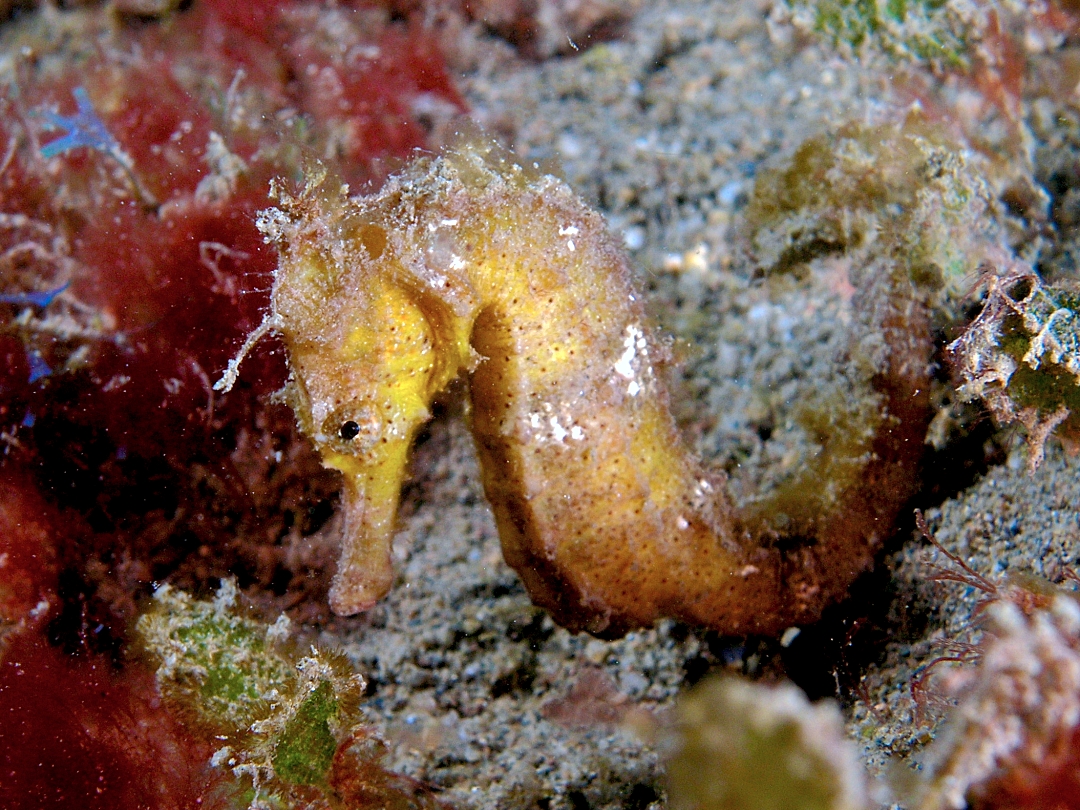 Colourations vary between yellow, cream, and reddish hues with numerous dark spots. Found at depths of eight metres, it feeds on small crustaceans and planktonic organisms, and is thus considered omnivorous. Again, this species is classified as vulnerable.

The tiger tail seahorse’s yellow and black colourings give it its name with the blacker stripes from its lower abdomen to the tip of its tail. It is fairly large for a seahorse at up to 18.5cm in length. Usually, they are seen together in pairs on coral reefs, sponges, and seaweed.

Found in warm waters, they thrive on very small fish, soft coral, small shrimps, and plankton and have a lifespan of 1 to 5 years. It is listed as vulnerable by the International Union for Conservation of Nature (IUCN).

The spiny or thorny seahorse grows up to 16cm in length. It has sharp spines with dark tips occurring on its head and nose. With long and tapered snouts displaying one or more white lines, their body colourations vary from the habitats they occupy matching their surroundings in depths below 15 metres. These include weed-overgrown rocky reefs, sponges, soft corals, and seagrass beds. This species has been gradually declining by an estimated 30 per cent over the last 10 years and is listed as vulnerable. 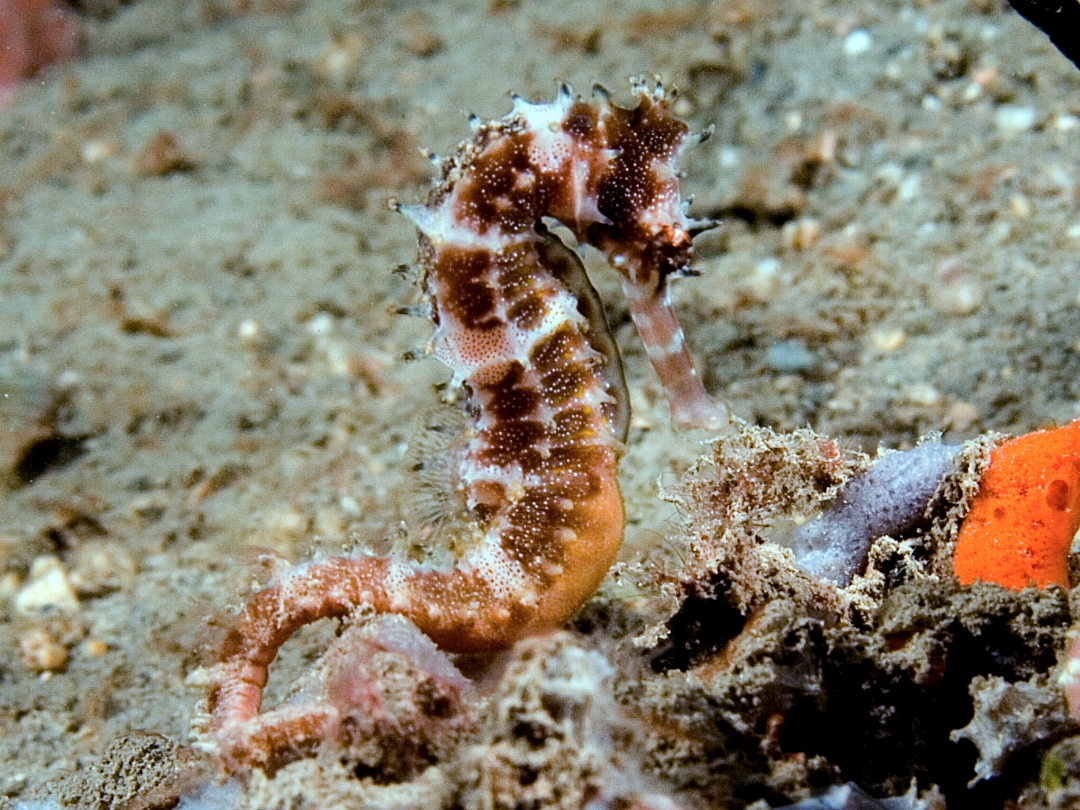 Hippocampus histrix has sharp spines with dark tips occurring on its head and nose. – Photo by Nick Hobgood/Wikimedia Commons

At about 12.5cm long, the hedgehog seahorse has a long snout and bodily spines. It can be found living on sand or silt beds up to a depth of 70 metres. It is a carnivorous species feeding on small crustaceans and zooplankton. Deep water species are red or orange matching the colours of corals and sponges. They are gradually disappearing as the result of trawl fisheries and are reported as bycatch.

Reaching a maximum length of 8cm, the Japanese seahorse is coloured dark brown with a relatively long tail. For years its distribution remained in Japanese waters but has now been found in Malaysian and Cambodian waters. Very small at birth and once expelled from the male’s pouch, they live for six months in a planktonic state, drifting with plankton in the oceans before eventually settling in Zostera seagrass beds. This species is classified as vulnerable.

The pygmy seahorse is the tiniest of seahorses at less than 2cm long. Living exclusively on fan corals, it was first discovered 52 years ago by George Bargibant. It is the most camouflaged of all the species and because of its minute size is very difficult to see thriving on gorgonian reef corals at depths of between 10 to 40 metres.

As with all species of seahorse, upon their birth, the fry are left to their own devices for survival. So little is known about this fish that it is classified as a least-concern species in the IUCN listings.

Commercial overfishing by trawlers together with ships dragging their anchors across coral reefs and seagrass meadows are constant threats to these creatures in tropical seas. Seagrass meadows are also threatened by agricultural runoff from the land containing pesticides, herbicides, and phosphate fertilisers.

In the Central Philippines and in Indonesia, seahorses are seen as a delicacy, sold at hawker stalls on sticks like satay. Generally, in Asia, they fetch a ridiculous price per kilogram, even more than silver!

Traditional Chinese medicine absorbs over 150 million seahorses a year in the manufacture of pills alleged to combat impotence, wheezing, and pains.

The world’s pet trade consumes a million a year for aquaria. In Asian and Mediterranean countries, dried seahorses are sold at a rate of a million a year as tourist souvenirs. It is a staggering thought that the mortality rate is so very high when only 0.5 per cent of new-borns survive into adulthood.

Climate change is, indeed, taking its toll on coral reefs and thus depriving seahorses of their habitats. Seahorses pose no threat to mankind but we ever increasingly continue to threaten them and their undersea world.