Wednesday, October 27
You are at:Home»Features»Keeping their language, culture alive

Jatti Mirieks of Miri strive to preserve and uphold their identity, traditions and folklores 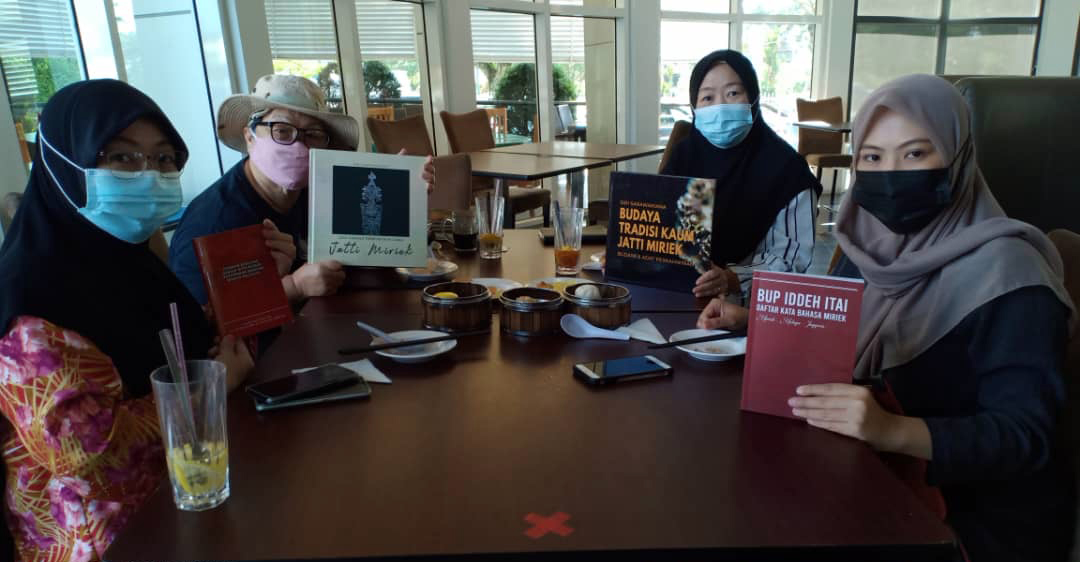 (From right) Hazwani, Robiah, the writer and Malati hold up the books co-published by the association.

EARLIER this year, a book compiling a vast list of Miriek words, complete with Malay and English translations, was published by Persatuan Jatti Miriek Miri.

I wanted to grab a copy of ‘Bup Iddeh Itai’, as I was interested in having a better understanding over the process of producing such a glossary meant to define this community, from whom the city got its very name.

So I arranged to meet some members of the association, and this was not an easy undertaking in view of the restrictive Movement Control Order (MCO) and the standard operating procedures (SOP) necessitated by the Covid-19 situation.

Moreover Robiah Tani, her sister Matati Tani and Haswani Mohamad Husli were very busy – we had to come up with a suitable time for us to sit down together and chat.

Eventually, we got to meet and these three Jatti Miriek ladies were simply lovely – it was truly a worthwhile learning and enriching experience for me.

Preservation of heritage through books 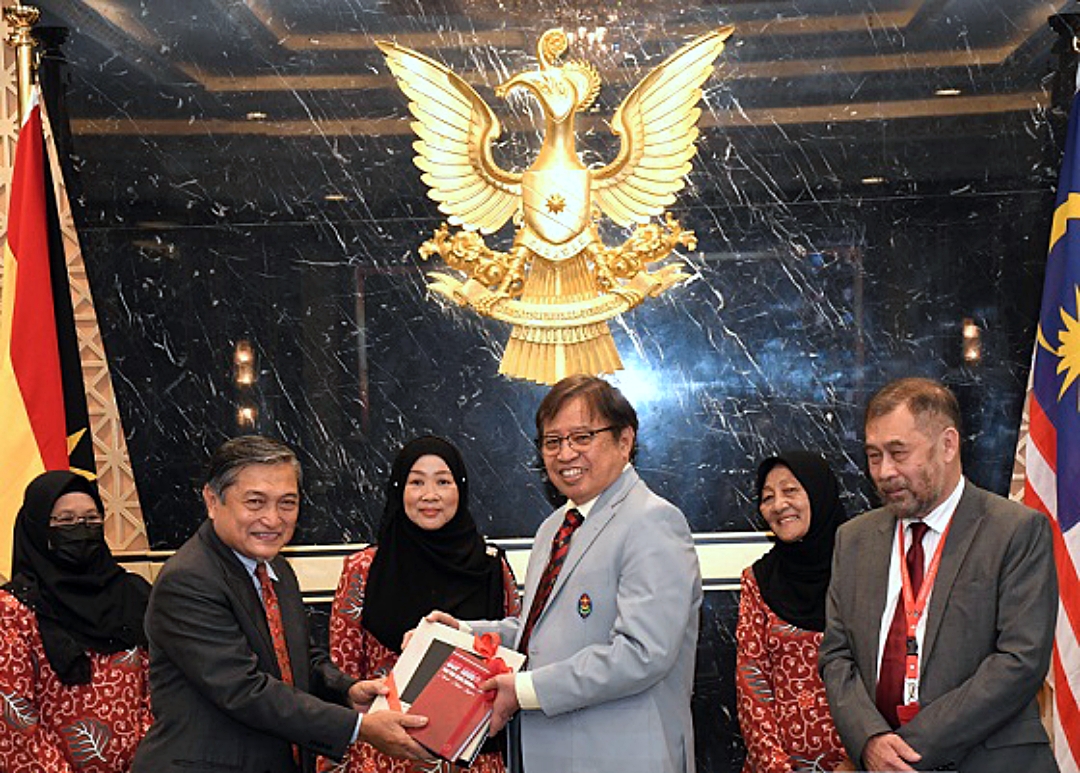 File photo shows Abang Johari receiving the book ‘Bup Iddeh Itai’ from Abdillah (second left), who led a delegation from the association for a courtesy call on the Chief Minister in February 2021.

The Persatuan Jatti Miriek Miri was established in 1982 and today, it occupies a large building at Jee Foh Road.

According to Haswani, who is the association’s secretary, the committee members have always been working hard to plan and run activities every year.

“Even during the pandemic, we do our best (in conducting the activities) under strict compliance with the SOP,” she told thesundaypost in Miri.

The association, though small, has been very helpful in efforts towards preserving the community’s culture, language, traditions and folklores.

Today, it is estimated that there are over 10,000 Jatti Mirieks in Sarawak, with the majority of them living in Miri and across the Lower Baram Valley.

The main committee of the ‘persatuan’ (association) has, in collaboration with various agencies, published three very significant books over the past three years – all signifying its commitment to preserving the community’s identity and heritage.

With Curtin University Sarawak sited in Miri, it was deemed natural for the academicians from the institution to study the intricacies of the Jatti Miriek language.

It is said that ‘Miri’ derived from the mispronunciation of this ethnic group’s name by many of the Europeans, who later came to the region for oil exploration following the discovery of this raw commodity back in the early 20th century. 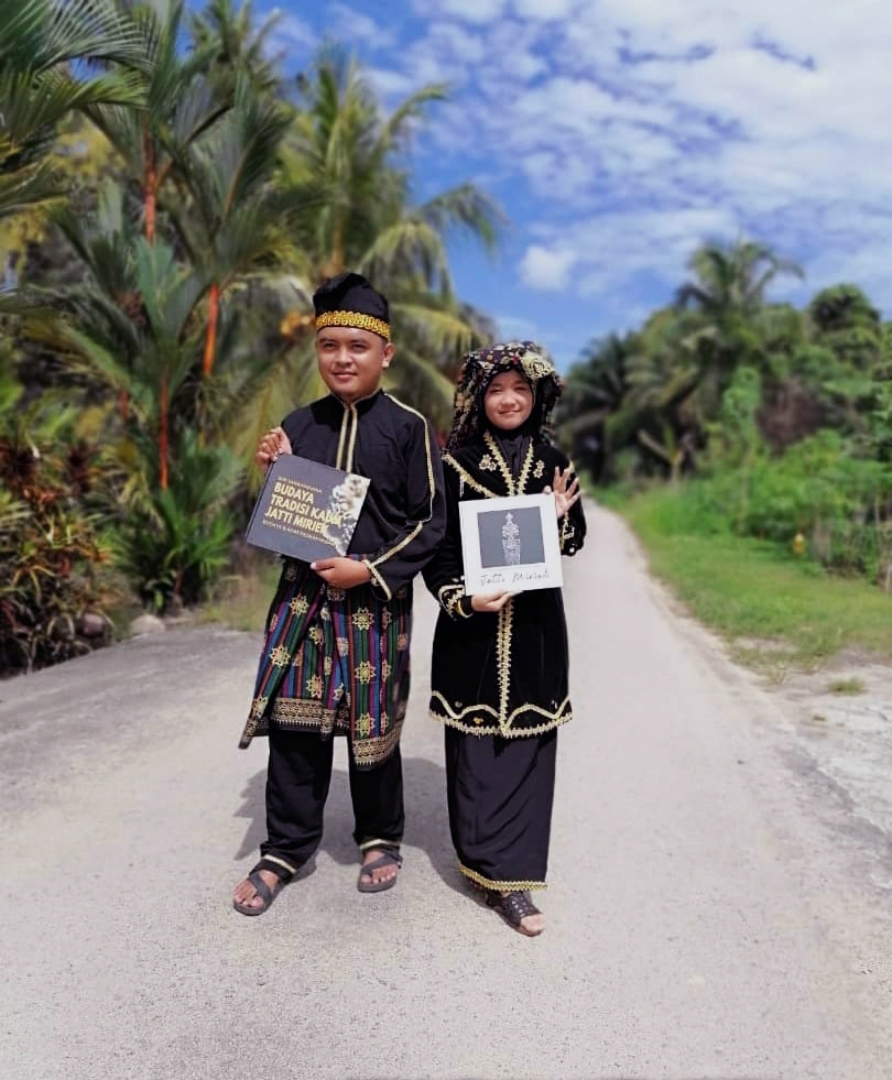 The Jatti Miriek language is unique and far different from the local Malay. It is believed that it has been in existence for 400 years, and the status of this community being the earliest settlers along the Miri River has reinforced the story about Miri city being named after them.

Regarding the compilation works on ‘Bup Iddeh Itai’, Robiah said the association worked very closely and meticulously with Dewan Bahasa and Pustaka (DBP) – a statutory body tasked with coordinating the use of the Malay language and Malay-language literature works in Malaysia – and several Jatti Mirieks elders.

“It was an undertaking that took several years, in that they would painstakingly sort every word and categorise them very slowly – sometimes, only one or two words a day.

“It was a tough journey, but it was worth it,” she said.
“In the end, 4,167 words were chosen and listed – each with its Bahasa Malaysia and English translations.

“The group was just delighted that the work had made it to publication. Indeed, the book is another feather to the association’s cap.” 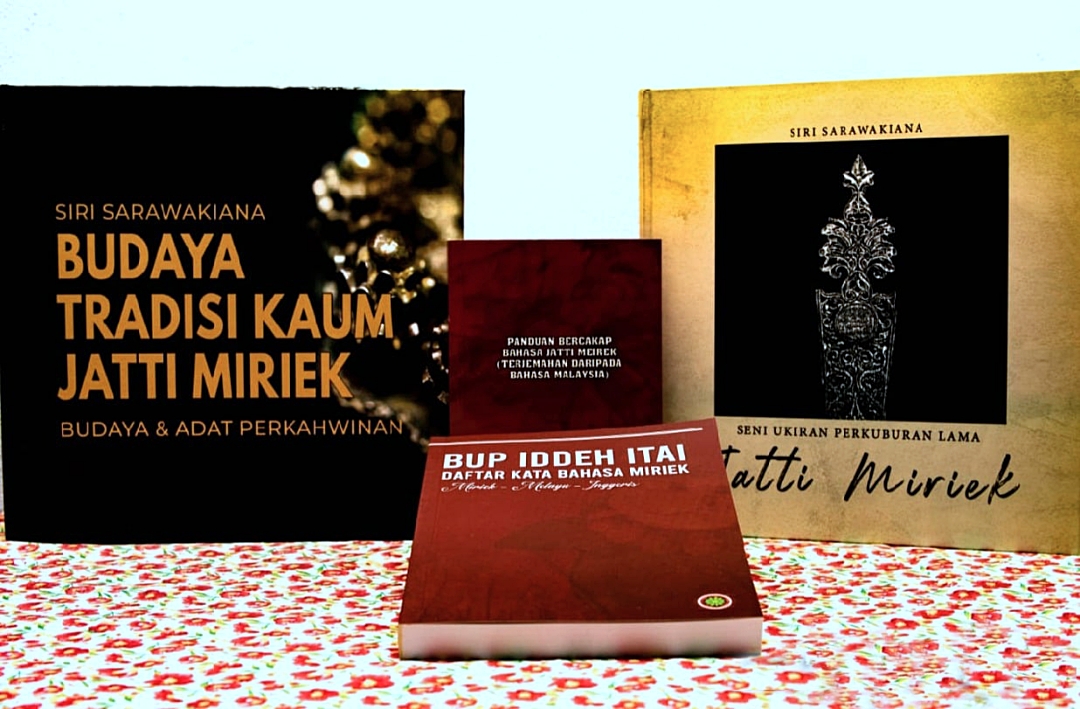 The publication of a dictionary, a book about Jatti Miriek’s unique headstone carvings and also one about its marriage traditions, signifies how far a community can move forward.

There was another book launched last year, written by academician Dr Yakup Mohd Rafee and published under the ‘Sarawakiana Series’, about the art of Jatti Miriek’s intricate headstone carvings.

The author, who is an associate professor at Universiti Malaysia Sarawak (Unimas) in Kota Samarahan, wrote extensively about these stelae, many of which were made from ‘belian’ (local ironwood).

In particular, his work covered the funeral rites and practices of the Jatti Mirieks before and after the arrival of Islam. The research covered 14 Jatti Miriek cemeteries – each testifying the existence of the community’s early settlements across Miri and the Lower Baram, right up to Bintulu.

“These old cemeteries are located along the coastline, and they stand as ‘witnesses’ of our history.

She also spoke about ‘her ancestors’ giving the name ‘Tab Sinak’ to mark a place where the Chinese had first stepped upon their arrival in Miri.

“So this is the Jatti Miriek’s history mentioning the arrival of the first Chinese settlers in Miri – how remarkable is that!” enthused Robiah.
Adding on, Matati said each Jatti Miriek headstone studied was unique.

“Each market has its own intricate design – one is different from the other.

“The Jatti Miriek artisans must have been highly skilled – or perhaps, they were inspired through special knowledge bestowed upon them by God.” 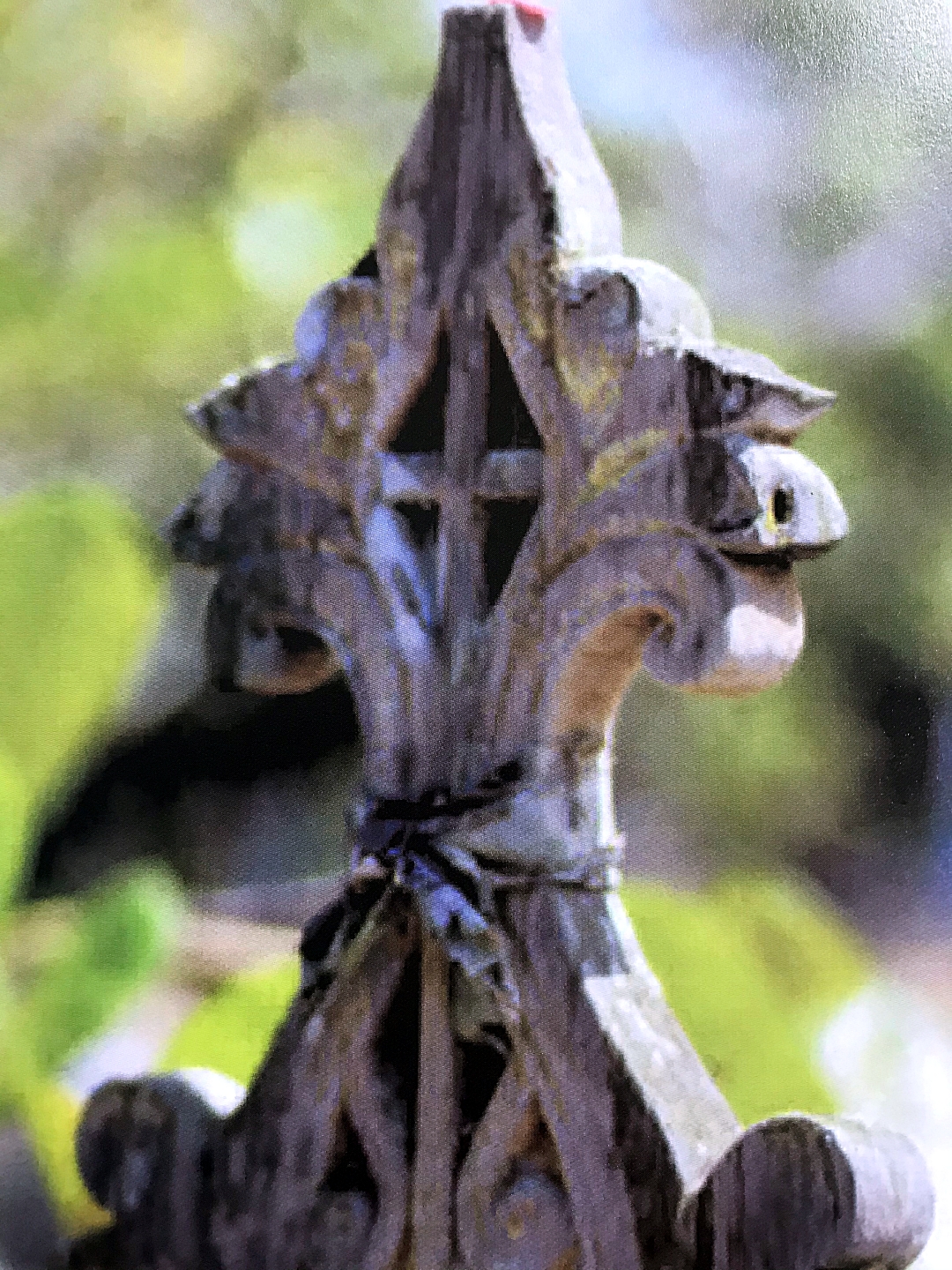 According to Matati, each Jatti Miriek headstone studied is unique.

Another book written by Prof Yakub – also published under the ‘Sarawakiana Series’ – makes for a very interesting read for those interested in native culture.

In this writer’s opinion, it would also serve as a good document for the future generations of Jatti Mirieks to learn more about their heritage and identity, and understand the traditions pertaining to marriage observed by their community.

Entitled ‘Budaya Tradisi Kaum Jatti Miriek: Budaya & Adat Perkahwinan’ (Traditional Heritage of the Jatti Miriek: Marriage Culture and Customs), the book details the customs observed by couple, their families and their neighbours before, during and after the wedding and all the relevant rituals; the setting-ups including the clothing worn by the newlyweds on the big day, as well as the ‘must-be-strictly-complied-with’ rules being subjected upon the bride, the groom and their families.

This book is perhaps the most special among all the other books co-produced by the ‘persatuan’, in that it provides ‘a more immersive experience’ for the readers – the application of augmented reality (AR) in making all the images and illustrations on the book become ‘alive’ through the use of a smartphone or other compatible smart devices.

Robiah shared with me her experience in filling out official forms that required one’s ‘category of race’ to be stated.
“I have been writing ‘Miriek’ for the longest time, partly to see the reaction, but mostly, to affirm my pride of being a member of the Jatti Miriek community in Sarawak. 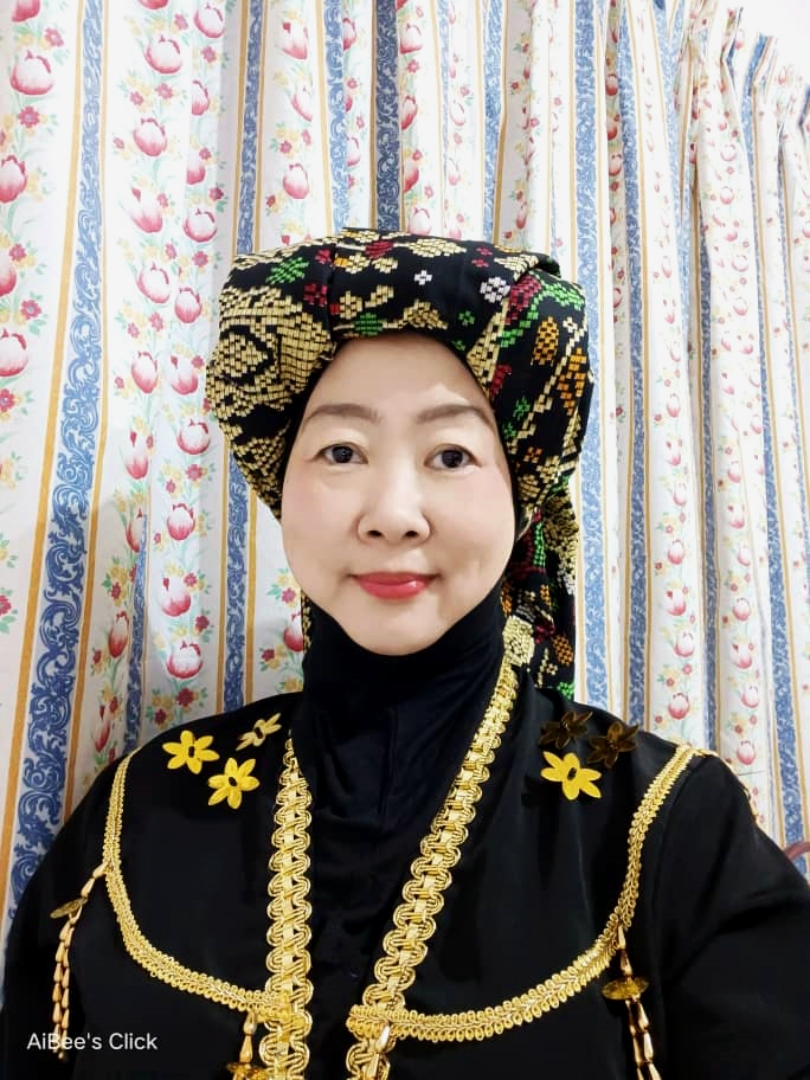 Robiah wears the sarong-wrap headdress, peculiar to the women of her community.

“While it can be ‘hekeh’ (a Miriek word for ‘exasperating’) to explain what Jatti Miriek is to the uninitiated, I really think it’s high time for Malaysians, especially Sarawakians, to stop mistaking us as Malays – and to start acknowledging us as a distinctive ethnic group with our own heritage, culture and language.

“Many times, people assume that I am a Sarawak Malay. Whenever this happens, I’d go into a lengthy discussion about my identity as a Miriek – I want people to know who we are.

“The Jatti Mirieks are categorised as ‘Sarawak Malays’ in the ‘RACE’ column on most of government’s official forms, while other minority communities such as the Kayans and the Kenyahs have already gained their respective recognitions,” she lamented.

One of its plans was to establish its own cooperative, meant as means for members to diversify their sources of income.

The initial arrangement was to open an outlet at Marina Park City, but then, the pandemic struck.

Coupled with the softening of the economy, this cooperation project had to be shelved for now.

Nonetheless, this community still has many things to be proud about beyond the publication of the three books.

“The publication of our dictionary, a book about our unique headstone carvings, and also one about our marriage traditions – one can see how far a community can move forward.

“We showcase our costumes, musical instruments and lots of old photographs at the gallery.

“Our gold ornaments and those worn during special occasions like weddings are very elaborate. “The committee members are still working on improving this gallery with more exhibitions.” 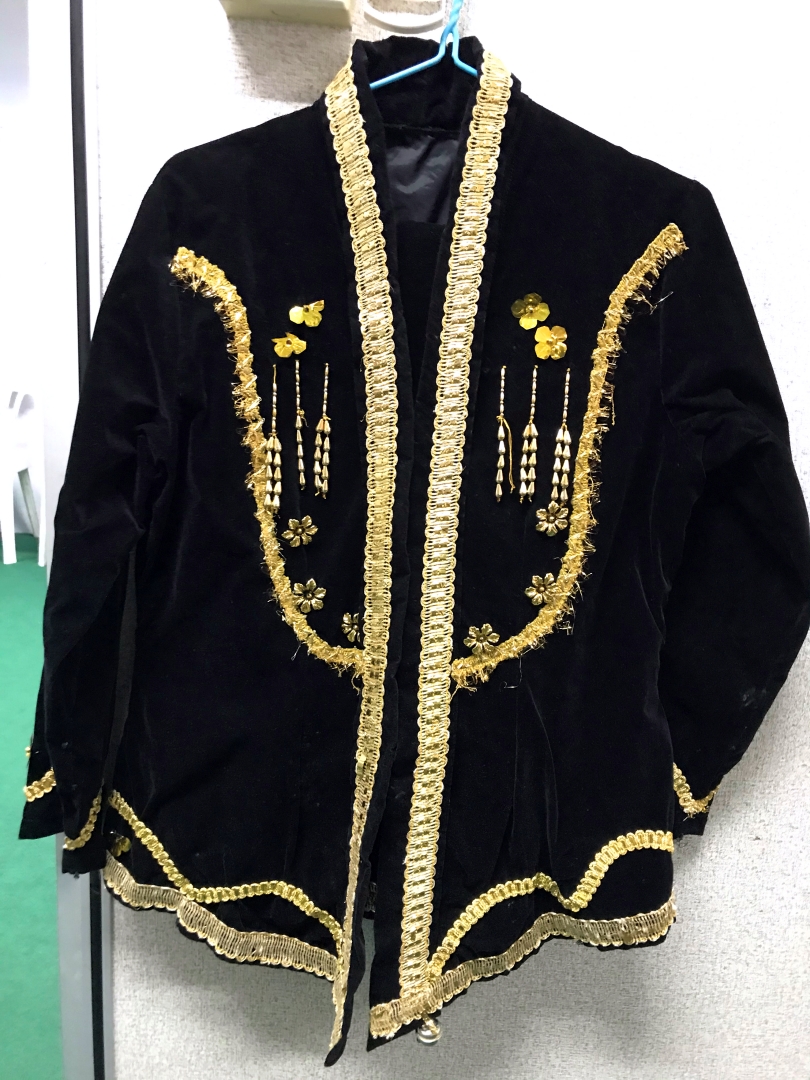 Photo shows a closer look at the fully-decked top part of the traditional men’s costume of the Jatti Miriek, which resembles a blazer.

That session with Robiah, Matati and Hazwani had made me realise, and truly respect, the community’s firm stand in gaining official recognition and validation as an ethnic group in Sarawak, and also their efforts in upholding their history and heritage through research and documentations.

It made my own copy of ‘Bup Iddeh Itai’ even more meaningful than just being a book.