Sunday, October 24
You are at:Home»News»Sarawak»18 inoculated under vaccination programme for Bintulu homeless 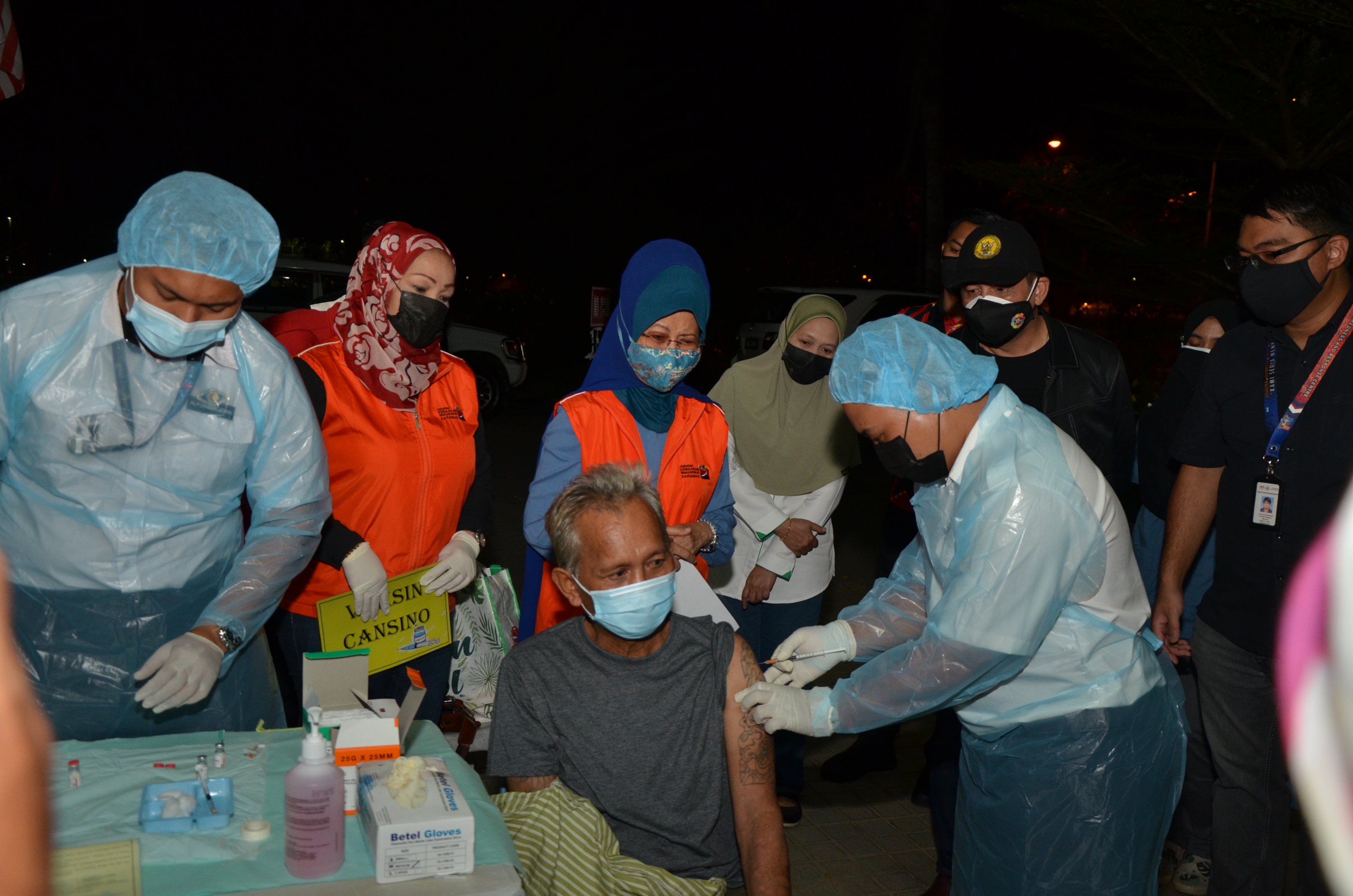 Fatimah (standing, third left) observes the administration of the CanSino vaccine on a homeless man at Bintulu Resident’s Office. On her right is Noriah. — Photo by Abang Ismail Abang Su’ud

According to Minister of Welfare, Community Wellbeing, Women, Family and Childhood Development Dato Sri Fatimah Abdullah, the CanSino vaccine is used as it only requires a single-dose and Bintulu is the state’s last administrative division to run the programme, which was launched on July 25.

“A total of 103 out of 155 homeless people in Sarawak have been registered with the programme and have received two doses of the Covid-19 vaccine,” she told reporters when met at the town centre late Saturday.

Adding on, the minister said during the first observation over this division in July this year, there were only 18 homeless individuals recorded, but the number had increased to 48 people during the second observation conducted later on.

“Two out of three homeless individuals met tonight (Saturday) said they’re from Kapit, coming down to Bintulu to work, but because of Covid-19, many had been affected – they lost jobs, had no income, had no place to stay and thus, had become homeless,” she said.

She thus hoped that with the reopening of more economic sectors, they would eventually return to work, be able to earn income and get out their current plight.

“Still, it’s a challenge for the authorities to trace and vaccinate these (homeless) groups, despite JKM having carried out observations and collected their profile data prior to running the vaccination programme.

“This is because sometimes, the homeless individuals would be moving from one place to another.

“Many of them also do not have identification documents, but the Ministry of Health does have a system to record their identifications for the vaccination.”

Another challenge, said Fatimah, was for the authorities having to deal with those with health issues – be they drug abuse or medicine overdose – and especially, among those with mental illness.

She pointed out that under this programme, three approaches were being used: bringing them to the vaccination centre (PPV); gathering them at a temporary centre where they would later receive the vaccine jabs; and going to their locations and vaccinating them on the spot.

In this regard, the minister said the state government had approved the setting up of transit points (TTG) for the homeless folk in major locations, namely here, Kuching, Sibu and Miri.

“The TTG in Bintulu is at Rumah Tumpangan Sebiew. These TTGs would be operated by selected NGOs (non-governmental organisations).

“Each serves as a temporary transit for the homeless people to clean themselves up, have dinner and some sleep; the next day, they can resume their daily activities and return to the centre at night.

“Necessary intervention measures such as counselling, as well as consultation rooms for doctors to carry out free health examinations, are also be provided at these TTGs,” she said.

According to Fatimah, this is a new concept in dealing with the homeless community in the state, as based on the previous move of sending them to Pusat Desa Bina Diri for training, the majority of them did not like to be placed inside an institution.

“With this concept, we provide shelter for the homeless folk so that they would no longer sleep on the walkways, which expose them to a myriad of health issues,” she added.