Tuesday, October 26
You are at:Home»Features»From construction worker to operating a business dealing in orthotics and prosthetics, Ipoh amputee takes it one step at a time 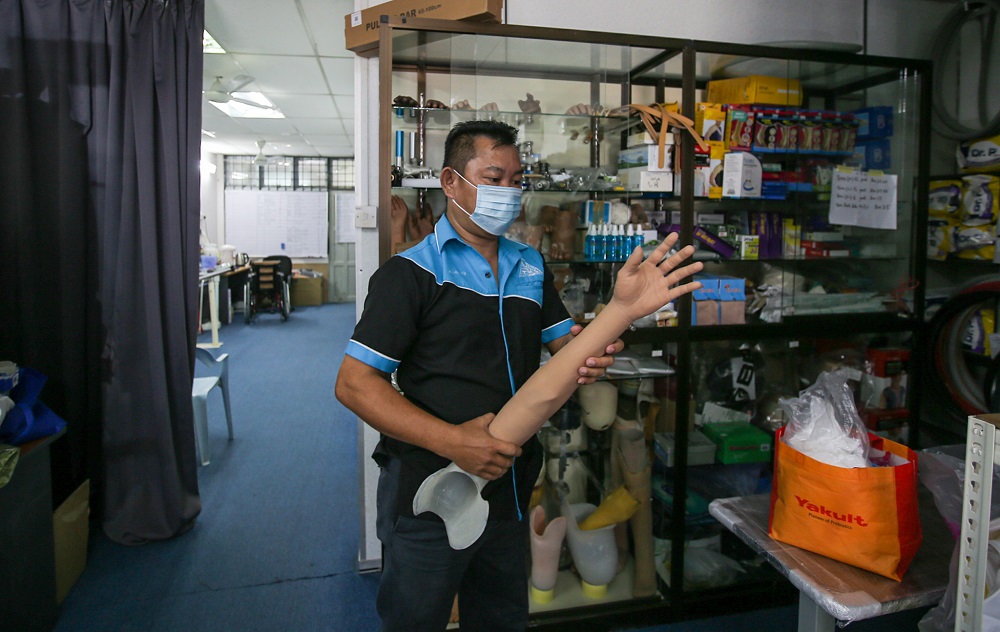 Having lost his left leg following an accident in 1994, the then 20-year-old had to go to Kuala Lumpur to fix a prosthetic leg.

“At that time, there was no company dealing with prosthetic limbs in Ipoh,” he recalls.

“Thinking that it would be difficult for me to land a job due to my disability, I decided to propose to the company to make me their salesman here.”

Speaking to Malay Mail, Ho, now 47, said when he initially started, it was an uphill battle for him due to the language barrier.

“I contemplated giving up six months after I started but what an orthopedic specialist said to me made me persevere to today.”

“He said I should not allow my language barrier to be a problem.

“Using doctors as an example, he told me that they too sometimes have problems communicating with patients despite being highly educated but still soldier on.”

Ho said the specialist also told him the importance of being trustworthy.

“With that, I continued till today.”

After working with the Kuala Lumpur-based company for 10 years, Ho went on to establish his own company Total Medical Supplies at Bandar Ipoh Raya dealing in prosthetic limbs, orthotics, and medical equipment in 2005.

Ho said he needs at least two days to complete an order.

“The delivery date might also be delayed if there are no raw materials.”

From successful businessman to national athlete

Having played ping pong since school, Ho did not let his disability stop him from continuing in the sport.

Ho said he picked up the bat again in 2000 following encouragement from his other disabled friends.

Since then, Ho had participated in 20 local and foreign championships before hanging up his bat two years ago.

His competitive years has taken him to countries like the Philippines, Thailand, South Korea, Australia, Vietnam and Singapore.

He won 20 medals including 10 from Asian Para Games held at Kuala Lumpur in 2001, Arafura Games at Australia in 2009 and Sea Games held at Vietnam and the Philippines.

His last professional competition was in 2018 where he participated in Sukan Malaysia held in Perak.

Looking forward to retirement in 10 years

Ho said he will be expanding his business by opening a new shop next year.

Currently, the workshop is located on the first floor of his present outlet with the ground floor serving as the office.

Ho hopes to be able to retire in 10 years where he wants to take the time to travel with his wife.

“I will be 57 years old in 10 years. If I wait any longer, I may not be able to walk and having a prosthetic limb makes it even more difficult.”

In the meantime, Ho hasn’t forgotten those in need.

“Sometimes when doctors recommend patients from a poor background, I will give them discounts or even waive my product cost.”

He also buys food for distribution to the needy. – Malay Mail