High incidence of crocodiles being spotted in rivers, public areas becomes a cause of grave concern amongst Mirians 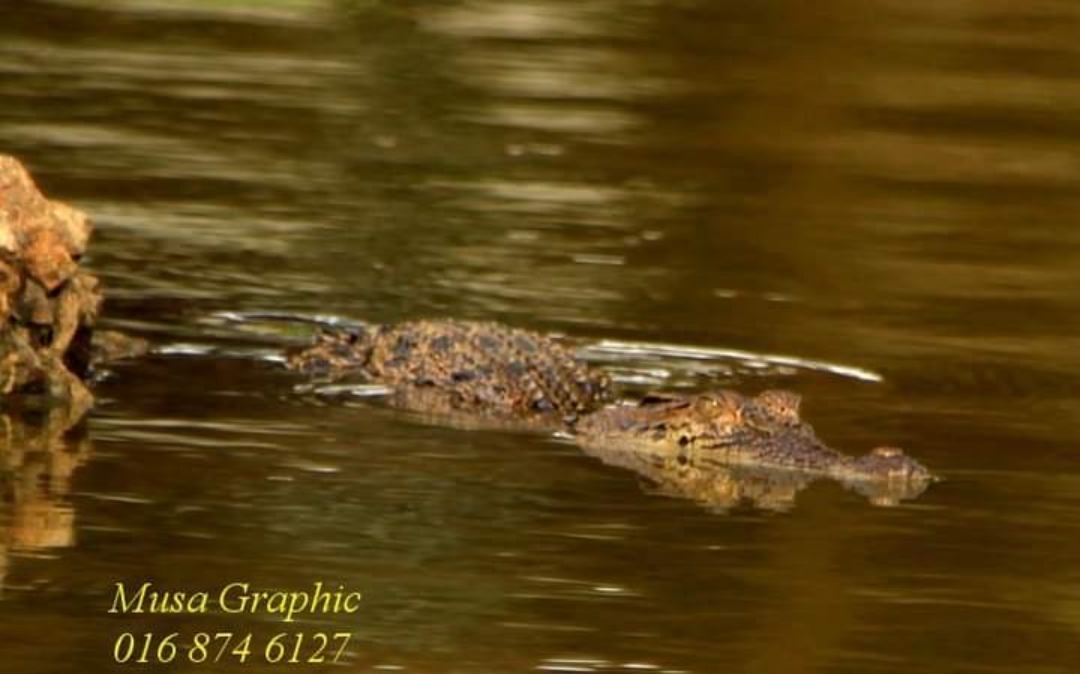 Photo shows one of the crocodiles sighted by Musa.

IT was a Sunday morning that came after a stormy night when Pemanca Freddie Abun Tadam called me for help in contacting the Sarawak Forestry Corporation (SFC).

The crocodile, which had been sighted regularly on the far edge of a fish pond behind his house at Miri-Lutong Road, had appeared again.

A kindergarten along Pujut Road is very near to Pemanca’s house, which is not far from Miri River and a few hundred yards away from the Lutong Bridge.

The Kelabit community leader has two ponds, located about 100 yards (a little over 90 metres) from the river.

Over the phone, the 75-year-old former educationist sounded very worried: “It’s very still, looking very comfortable sunning itself on a log at the furthest end of my backyard.”

His wife Renai Iwat, 65, a retired teacher, also sent me a photo that depicted exactly what he had described – the reptile looking ‘content and serene’ as it basked in the morning sun.

The crocodile had been their regular visitor since Christmas 2020, she said. 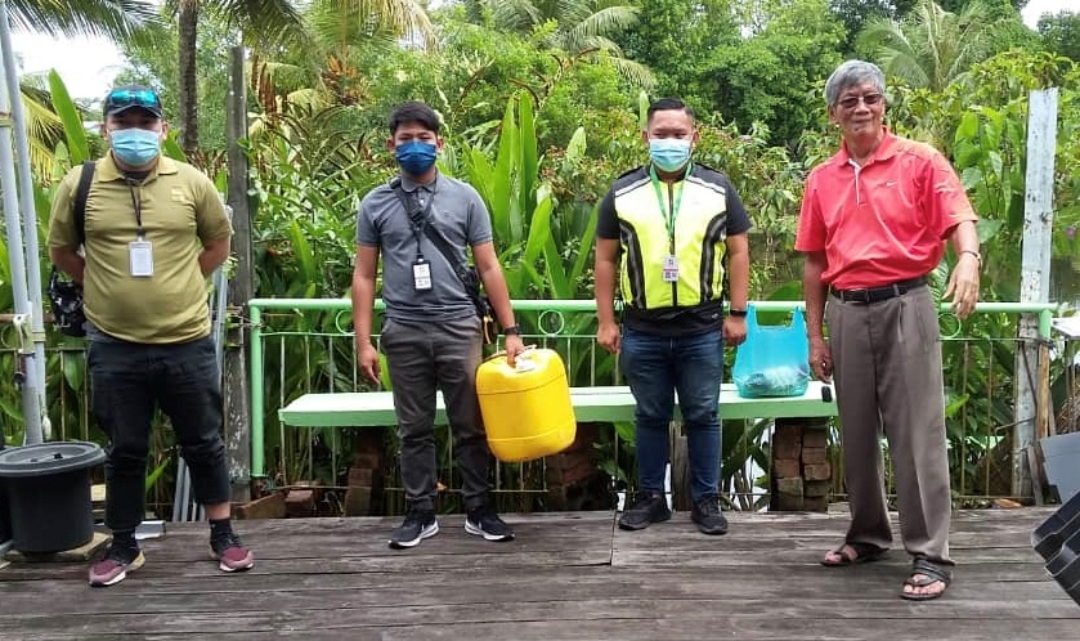 Pemanca Freddie (right) with the SFC team at his estate.

Crocodile sightings in Miri have been more frequent in recent years.

In 2018, a few visitors from Sibu and I saw one swimming up Miri River, at a section near Pullman Hotel by the riverbank. Photographs were taken and later, circulated on social media and even published on newspapers.

Quite recently, some hatchlings were caught from the drains at residential areas located near the major streams – many believed that they, somehow, found their way in from Miri River.

However, the sighting of the one that has been frequenting Pemanca Freddie’s backyard pond is worrisome indeed. Based on the photo sent by Renai, the reptile could very well be at least two metres in length.

The couple has set a stringent, ‘non-negotiable’ order for their three primary-school-age grandchildren, who are living with them, to never venture beyond the kitchen and wander around the backyard. 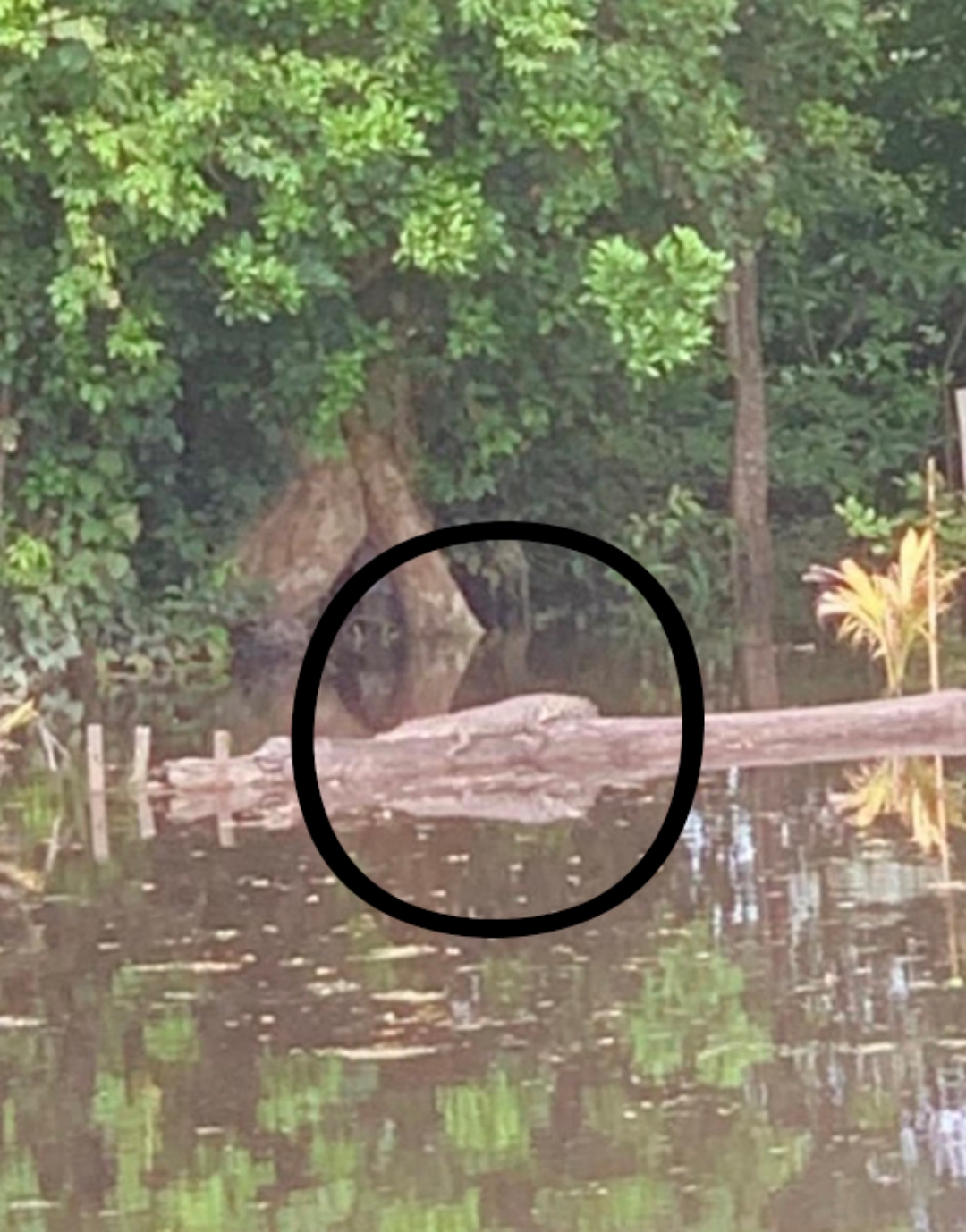 The photo, sent by Renai, shows the crocodile spotted on the edge of one of her husband’s fish ponds in their backyard.

They also have well-trained dogs, but sometimes, they do get worried over the possibility of the crocodile attacking their ‘canine guards’ – or worse, devouring them.

Another grave concern is the possibility of crocodile hatchlings finding their way into Pemanca Freddie’s two tilapia-rearing ponds.

“We have been putting in a lot of efforts into this tilapia project, which we have been running since we moved in here after my retirement about 20 years ago.

“Once this undertaking yields something, I would love to invite my friends over to do some fishing,” said Pemanca Freddie.

At the moment, two of the couple’s four children are living with them – their only daughter Tzarina who is not married, and their youngest son Julian who is married with three children.

Their eldest son Valentine is living in Pujut, while their second child Matucci’s house in near Miri Airport. Both have families of their own – each has two children.

The SFC was fast in arranging a team to conduct the inspection, following the report lodged by Pemanca Freddie, who was very happy to see such prompt response.

The team surveyed the grounds and studied the surroundings – they later suggested setting up a bait trap which, strangely, caused the Kelabit Pemanca to worry about his dogs.

Nonetheless, he was assured that this method was a standard way of capturing a crocodile.

Renai, on the other hand, was very sympathetic to the SFC team as she knew it would not be an easy undertaking.

A week later, she spoke to the writer: “Recently, we spotted two crocodiles, and we could not immediately call for help.

“One of them (crocodiles) stayed on just for a short while, but the other went into one of the ponds. Well, the timing was just not very good.

“We must find a way to get the SFC team here before the crocodile flees – and that’s not easy because that crocodile is quite big.”

Musa Musbah, presently the Miri branch chairman of the Malaysian Nature Society (MNS), told thesundaypost that the sighting of the crocodile at Pemanca Freddie’s backyard indicated that there might be another or more lurking around. 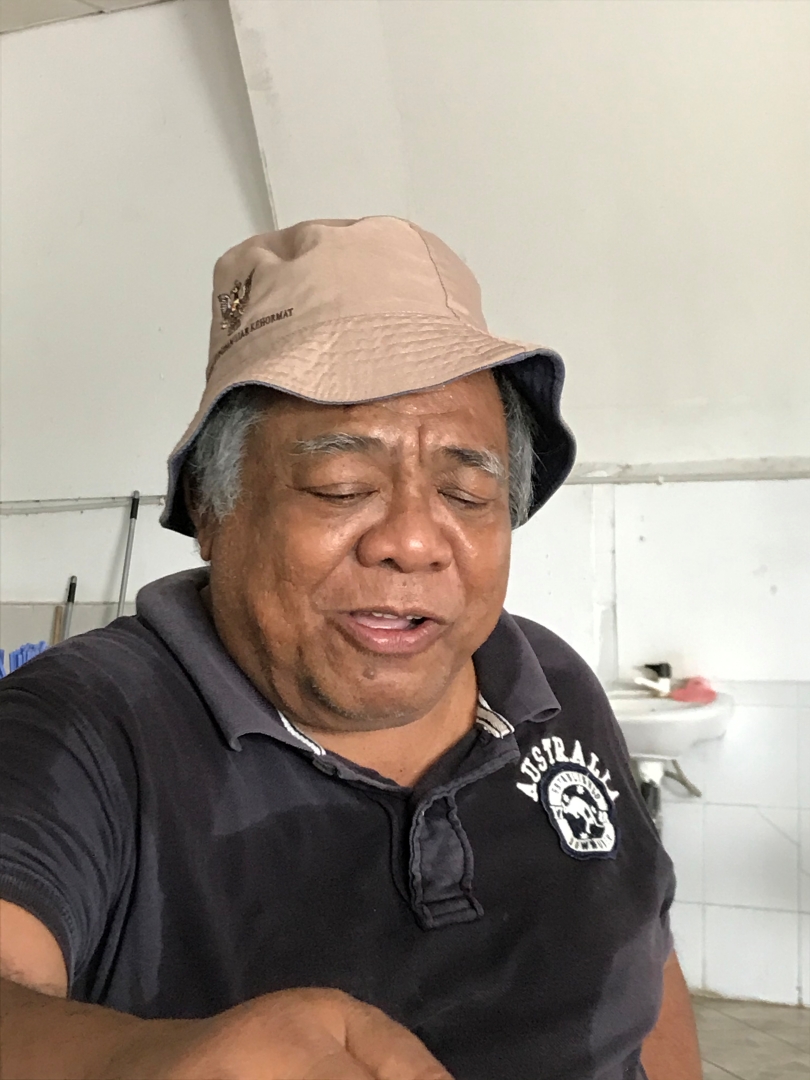 “It could be on the riverbank or in the nearby swamp, and it could be even bigger than the one sighted – who knows.”

Musa, a retired geologist, has been studying the crocodile population in Miri District and the nearby areas. Ten years ago, he and his friends made a special trip to Sibuti Wildlife Sanctuary where they conducted a survey on crocodiles along the 28km stretch of Sibuti River.

“We counted 24 crocodiles – translating into one crocodile per kilometre along that stretch alone. We began our journey upriver around late afternoon, when the tide was rising.

“At about 6pm, we reached KK (‘Ketua Kampong’, or village headman) Amin Antin’s house at Kampung Bulau and we had a talk with him.

“The KK told us about a man who was attacked by a crocodile two weeks before, and another incident that occurred in Sungai (River) Bakas soon after that.

“Now that’s quite an alarming frequency rate. The villagers felt that there was less food in the river for the crocodiles.

“Perhaps they (crocodiles) were expecting food thrown into the river by the kampong folk,” said Musa, who is an avid photographer.

He said his team commenced their survey at around 8pm, where the first crocodile sighted was at a spot very close to the village. Not long after that, they saw another that was rather small.

Musa said he had heard many reports about crocodile sightings from his friends.

“Crocodiles have been seen at Pengkalan Lutong, which is a popular picnic spot on the bank of Miri River. This venue is popular amongst families and has several food stalls.

“It has also been a place for participants to practise for various regattas since the 1950s.”

Musa also cited newspaper reports about crocodiles being sighted in Tudan, which is an area far inland from Lutong Beach – another popular place where families, youths and children would spend their weekends at.

“Recently, a crocodile believed to measure 3m in length was spotted there.

The sight made all beachgoers fled in terror, according to a newspaper report,” he said. 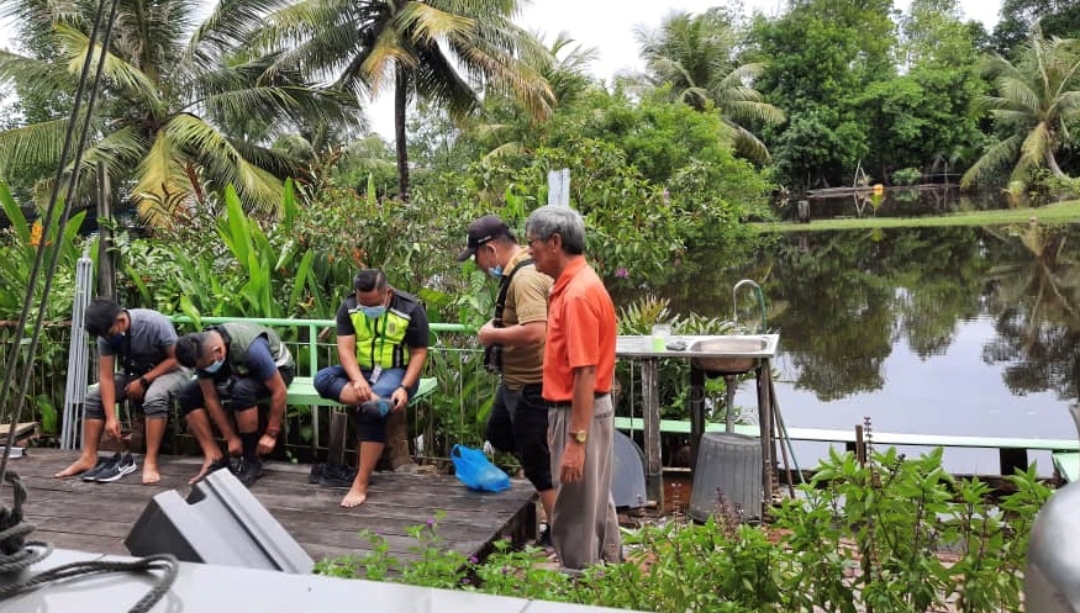 Pemanca Freddie (right) looks on as the SFC team members get ready to conduct checks.

When met in Miri, writer and lecturer Andreas Aming said the community should be more aware of the importance of nature, including the food chain.

According to him, crocodiles are part of nature’s food chain and once this is destroyed, chaos would set in.

“The natural habitat of flora and fauna should not be destroyed by unmindful projects.

“If crocodiles could not find their natural food, they would eat human beings.

“I have heard about crocodiles having reached Long Lama where I come from, so we have to be more than careful.

“Most importantly, though, we must make sure that our nature is well taken care of. We must not be the main destroyer of the natural balance.

We must give back before we get into real trouble,” he said.

Just as important, Andreas said efforts must be made to ensure that the conflict between humans and crocodiles would be under control
Dayu Randi, whose husband’s family owns eight acres of oil palm estates along a tributary of Niah River, affirmed that the claim about the rivers in Miri and Niah having so many crocodiles.

“Many plantation workers have seen these crocodiles and discovered many tracks.

“Some have even found crocodile eggs in the swamps,” she said, adding that none of her family members would ever bathe, swim or fish in the tributary.

“Like everyone else, we get our food from the supermarkets,” said this mother of two in half-jest.

“When we went to fetch water during the dry season last year, our favourite pet dog was dragged down and eaten by a crocodile. It was a frightening experience. Luckily at the time, my mother-in-law was with me,” she continued.

Dayu said after her family moved to the estate property about 10 years ago, they had been pumping water from the tributary to their home tanks for some time.

“Fortunately, we now receive water supply from the government, but until today, we don’t go to the river to bathe or swim.

“Our family never owned any gun, but even if we did, we didn’t have the licence to kill crocodiles – besides, this reptile moves very fast.

“In Niah, if a man was attacked and eaten by a crocodile, we must call the Bomba (Fire and Rescue Department) for help,” she added.

According to a Bidayuh friend of the writer, Gilbert Najum, so far there is only one crocodile hunting club in Sarawak, and it is in Kuching.

In 2016, the SFC introduced a ‘Crocodile Management Plan’ as a guideline in dealing with crocodiles – basically, it meant to ensure that crocodile-culling would be done in a sustainable manner, including some technical assistance such as the issuance of permit by the Controller of Wildlife.

With respect to the Regulations under Section 41, 42 and 42A of Wild Life Protection Ordinance 1998, hunting and culling of crocodiles are allowed when they are believed to be dangerous to the public.

“When I was younger, I used to go hunting with my Kedayan friends in Bekenu, about 40 minutes from Miri by road. We would be very careful near rivers.

“Bekenu used to be full of animals 15 years ago. Now the number of wildlife animals there is dwindling,” said Gilbert.

Back to Musa, he regarded crocodiles as ‘being on the top of the food chain’.

“If we’re to allow nature to take its course, this reptile would multiply very quickly and should the time come when they’re short of food, they would hunt down human beings too.

“The population of fishes and birds in the wild is dwindling because of pollution.

“By all means, humans must keep rivers clean for everyone to enjoy healthy nature,” he stressed.

Musa said lots of signs had been put up at rivers all over Miri to warn people, especially the visitors from outside the division, and remind them to always watch out for crocodiles.

“Animals like crocodiles do attract lots of tourists. Crocodile farms in Miri have been popular amongst the visitors, domestic and foreign alike.

“Just bear in mind that a man cannot outrun a hungry crocodile,” he added.

With respect to the Regulations under Section 41, 42 and 42A of Wild Life Protection Ordinance 1998, hunting and culling of crocodiles are allowed when they are believed to be dangerous to the public.