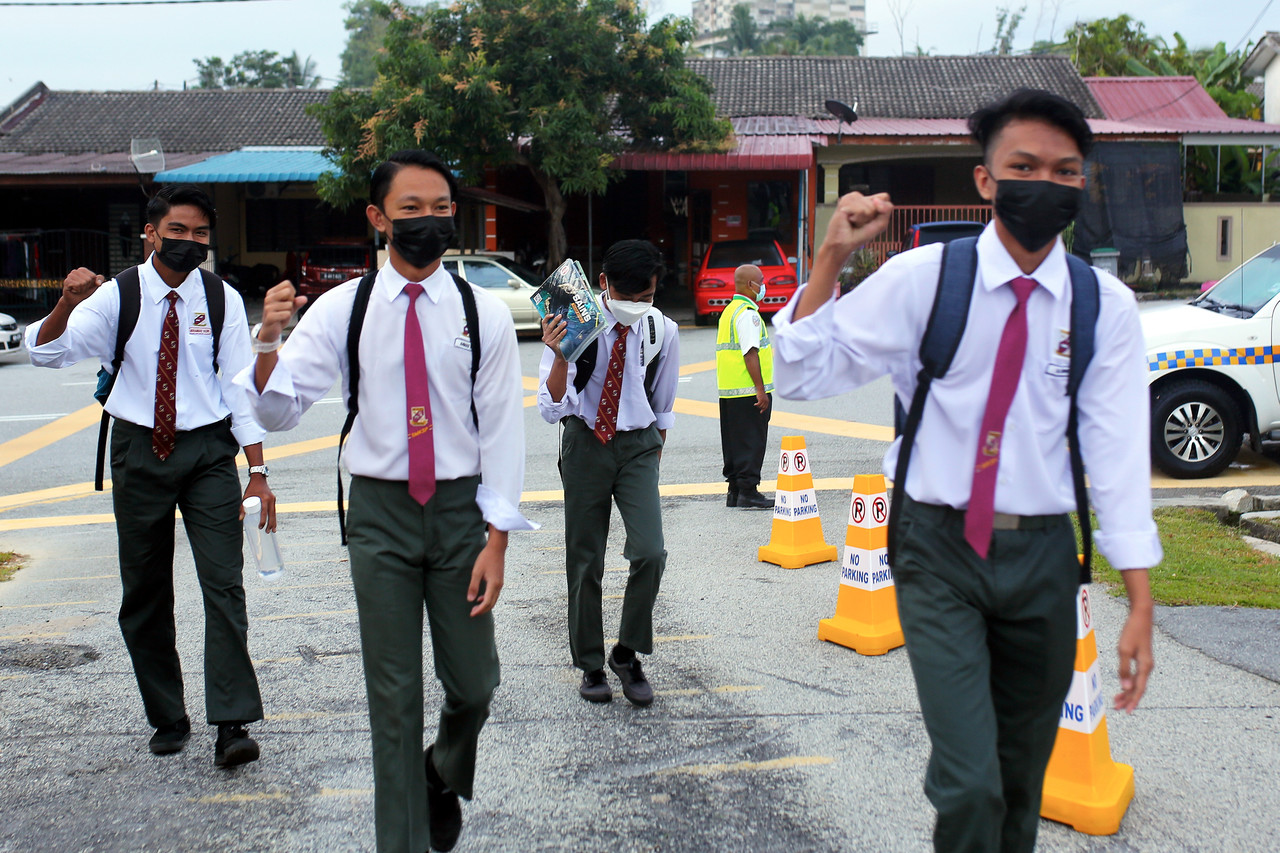 Students of SMK Seri Pagi in Negeri Sembilan are seen entering the school to begin their face-to-face school session today.

The opening of the schools today involved Semester Two  Form Six  students, international examination classes, students with special needs (MBK) and the Integrated Special Education Programme (PPKI) who will be attending classes without rotation according to the provisions in Phase Two of the National Recovery Plan.

For Negeri Sembilan and Labuan, it involves preschool, MBK and PPKI students, students sitting for public and international examinations who are in boarding schools, day schools and also private schools, as provided under Phase Three.

Yesterday, face-to-face school sessions began in Terengganu, Kelantan and Langkawi after schools nationwide were closed about six months due to the Covid-19 pandemic.

Schools in Johor and Kedah will open in stages for face-to-face learning from Oct 10.

In PUTRAJAYA, a check at Sekolah Menengah Kebangsaan Putrajaya Precinct 11 (1)  found that there was a hive of activity at the school as early 7.15 am as parents and guardians began arriving to send their children.

In PERLIS, State Education Committee chairman Rozieana Ahmad said more than 50 per cent of the total 8,297 student enrolment at the school were in school today.

They comprised Form Five and Form Six students, as well as PPKI and preschool students, and they all complied strictly to the stipulated standard operating procedures (SOPs), she added.

In PERAK, State Education, Higher Education and Human Resource Committee chairman Ahmad Saidi Mohamad Said said the school session went smoothly with students arriving as 6.30am and they all complied with the SOPs.

In SELANGOR, Sekolah Kebangsaan Raja Muda headmistress, Zuraidah Abd Azizi, when met, said the school’s had a total enrolment of 84 PPKI students and today, 46 out of 74 who are allowed to attend were present.

In MELAKA, State Secretary Datuk Ts Kamel Mohamad said that a total of 3,000 students commenced face to face learning in 145 secondary and primary schools in the state.

“Overall, I was informed by the Education Department that the opening of schools in Melaka is going smoothly and the schools have made the necessary preparations to ensure compliance with standard operating procedures set,” he said.