Friday, December 3
You are at:Home»News»Sarawak»Follow-up measures for flood-hit Kapit being discussed, says rep 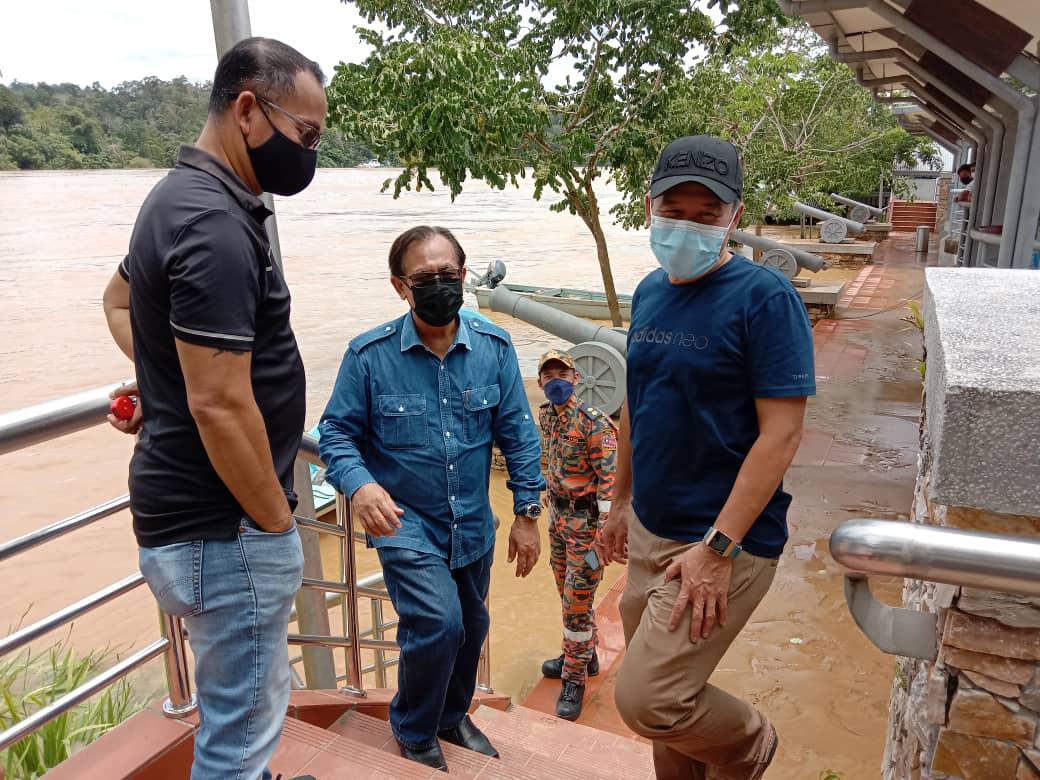 Jamit (front, centre) seen with Galong and Bujang during the water-level inspection at Kapit Waterfront. Behind them is Erwanddy.

KAPIT (Oct 5): There are many areas that need attention with regard to the flood situation that has struck Kapit over the past week.

In pointing this out, Bukit Goram assemblyman Jefferson Jamit Unyat said he had discussed this with Deputy Kapit Resident Galong Luang and Kapit divisional engineer Bujang Kanang on ways to address the problem.

“When we went to the flood-hit areas on the outskirts of Kapit town, where Rumah John Rambar and other longhouses are located, we could see that the floodwater had inundated Jalan Sungai Sesibau, which is the 1km access stretch connecting the longhouses to the main Bukit Goram Road.

“In this regard, perhaps the JKR (Public Works Department) Kapit, through the divisional engineer (Bujang) could arrange for upgrading works on elevating the level of this access road so that should the floodsstrike again, it would not be under water and thus, the longhouse folk could use it to make their way towards safety,” said Jamit when contacted yesterday.

He also expressed relief after being informed that the situation in Kapit had improved, as the floodwater had subsided and the heavy rain had stopped.

“I’m thankful that there is no casualty. Many of the flood victims have managed to move to higher ground and most of their belongings are safe. The rain has stopped, it is sunny again and the water level in Rajang River has resumed to normal.

“Nonetheless, I strongly advise those living in flood-prone areas to always be alert during the wet season, when flash floodscould occur following continuous downpours.

“We must always be prepared for any eventuality,” he said.

On Sunday, the assemblyman went to inspect the villages and other residential areas across town that were hit by floods, which struck late Friday and subsided late Sunday.

Apart from Galong and Bujang, Kapit Fire and Rescue officer Erwanddy Tugor also accompanied Jamit during the visit, where they also conducted checks on the water level at Kapit Waterfront.

Later, the assemblyman and his team joined local Malay community leaders Pemanca Abang Hamzah Bolhassan and Penghulu Berawi Kasahina briefing on the flood situation in two Malay villages in this town – Kampung Muhibbah Bletih and Kampung Baru, where the floods had adversely affected 27 and 22 households, respectively.

“We heard a joint appeal from KK (Ketua Kampung, or village headman) Razali Abdullah of Kampung Muhibbah Bletih and KK Mohamad Jaraee of Kampung Baru, for each village to be provided with a fibreglass boat to facilitate evacuation during floods.

“I had advised them to write in to him, and I would help them with the request,” said Jamit about the briefing.