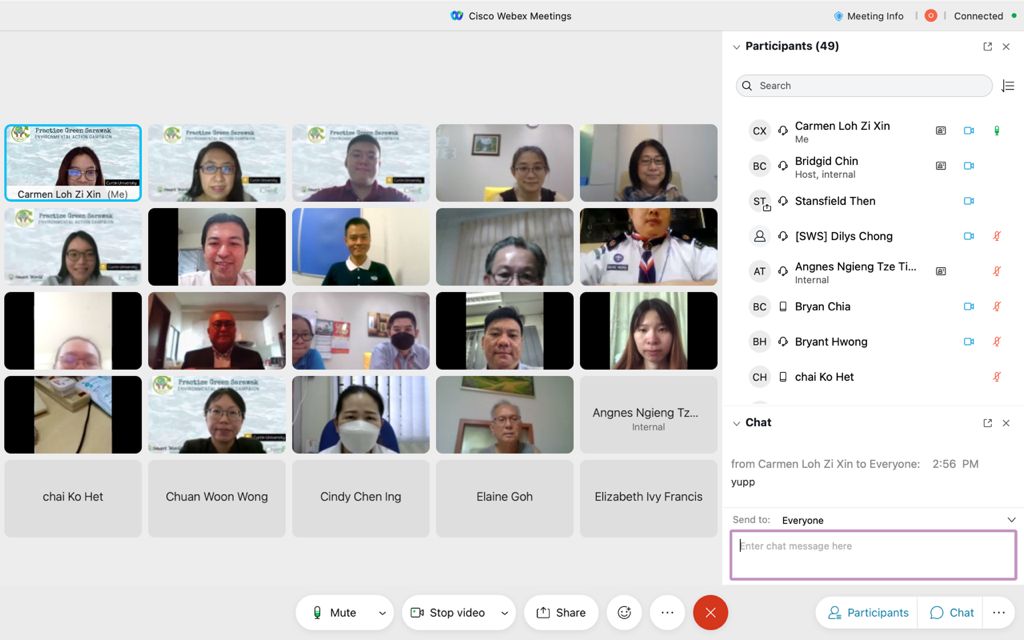 Screengrab shows Yii (third row from top, second left) and other participants interacting with one another during the webinar.

MIRI (Oct 5): Miri City Council (MCC) is actively investigating new ways of handling both solid waste and leachate as an effort to improve its waste management.

According to Mayor Adam Yii, every day the city collects between 230 tonnes and 250 tonnes of waste, of which 52 per cent comprises organic waste, and 36 per cent consists of recyclable items from household, commercial and industrial outlets.

He said the data was based on study conducted by BNN Consultant in August this year.

He added that usually these waste materials, upon collection, would be transported to Lambir transfer station where they would be consolidated before being sent to Sibuti landfill.

“In view of the new technologies and products that are available in the market, MCC hopes to acquire and apply it into its waste management system soon.

“For solid waste, a new kind of incinerator, which uses pyrolysis (a process of decomposing organic materials at elevated temperatures in the absence of oxygen), is available in compact mobile units. We believe that this is an interesting and a potentially game-changing method to handle solid waste.

“For leachate treatment, MCC is also looking at compact mobile units that use reverse osmosis and other technologies. This is, again, another potentially game-changing method to handle leachate,” said Yii in his speech for the ‘Practice Green Sarawak-Waste Management and Insights to Recycling Processes in Sarawak’ webinar yesterday, hosted by Curtin University Malaysia.

Adding on, he pointed out that the daily tonnage of the collected waste did not include those being discarded directly into the environment – in other words, waste being thrown into rivers and eventually, being washed out to sea and ending up on the beaches.

Such waste, he said, could constitute as much as 15 per cent of the whole collected waste and moreover, plastics stood out as being the most unaccounted waste item.

“Tackling waste derived from plastics proves to be the most challenging.

“Universally recognised as worst waste ever to be generated, plastic waste is, unfortunately, growing exponentially, due to its cheap and versatile uses in modern life.

“Now, an initiative by to MCC is recycling plastics into a road resurfacing material, in the form of polymer-modified asphalt. This technology has been used in many places like in India, and also in Malaysia.

“Currently, MCC is working with two Sarawak companies that work together in research and development for this polymer modified asphalt and once it is ready, it will be put under trial.

“It is hoped that through this commercial application, plastics can then be more zealously collected and recycled commercially,” said the mayor.

He said the SDG Unit had been running the ‘Say No to Plastics’ campaign regularly at supermarkets and shopping malls, where it had been encouraging the latter to use the more environment-friendly biodegradable bags or advocate the customers to use their own eco-friendly shopping bags.

“MCC is also working closely with other private entities and non-profit organisations on recycling such as Taiwan Buddhist Tzu Chi Foundation, Lions Club, Junior Chamber International and Miri Second Hand Dealers Association, in cleaning up the environment and also in promoting recycling.

“MCC is focusing on having a green city and shall continue to work with these entities to continue spreading the awareness,” said the mayor.