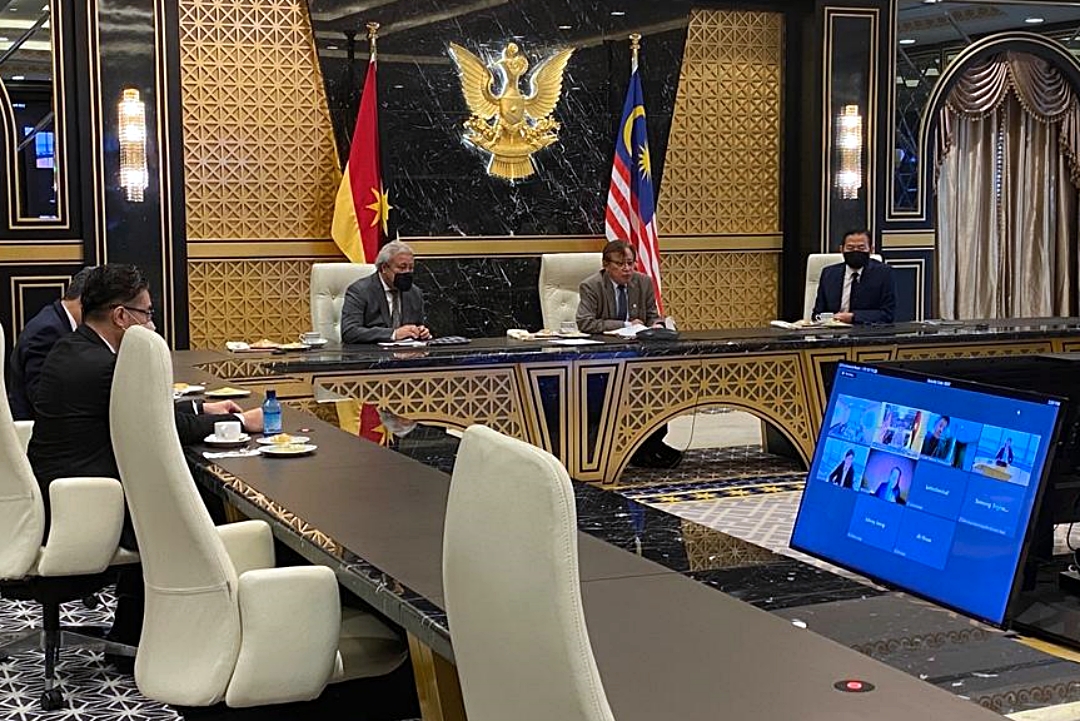 Abang Johari (second right), Awang Tengah (third right) and others during the online engagement session with the Korean consortium on Wednesday.

A statement from the Chief Minister’s Office yesterday said the Sarawak H2biscus Green Hydrogen/Ammonia Project will be sponsored and developed by a consortium comprising POSCO, Lotte Chemical, Sarawak Economic Development Corporation (SEDC) through its subsidiary SEDC Energy, and Samsung Engineering.

“The pre-feasibility study has been completed and the feasibility study is expected to start this year. The contracts for the Front End Engineering Design (FEED) and EPC are scheduled to be awarded in following year,” said the statement.

It said the project was also presented at the ‘Announcement of Korea Government Hydrogen Economy & Society Development Strategy’, which highlights the Korean government’s hydrogen economy achievements and features.

Samsung Engineering president and chief executive officer Sungan Choi presented the ‘Malaysia Sarawak H2biscus Green Hydrogen/Ammonia Project’ to the president and the ministers of the Republic of Korea.

“In his presentation, Choi pointed out that three major Korean companies namely POSCO, Lotte Chemical and Samsung Engineering will be taking an active role in developing the entire cycle of the project, which includes direct investment, construction, transportation and utilisation.

“He also mentioned the wide range of eco-friendly products that the project will be producing, such as green hydrogen, green and blue ammonia, green methanol and CCU,” read the statement.

It said Choi also emphasised that the project will serve as an exemplary project of international standing for renewable energy trading and hydrogen transportation between Korea and Malaysia, establishing hydrogen-related standards for the two countries.

The statement also said Chief Minister Datuk Patinggi Abang Johari Tun Openg and Deputy Chief Minister Datuk Amar Awang Tengah Ali Hassan led a state team in an online engagement session on Wednesday with the Korean consortium, to gain insights into the projects and its benefits both to Korea and Sarawak.

Meanwhile, Samsung Engineering is currently executing the Sarawak Petchem methanol plant project in Bintulu which is expected to produce 5,000 tonnes per day of methanol.

The company is channeling its efforts to be a ‘Beyond EPC Green Solution Provider’, providing green infrastructure and energy optimisation services through process analysis based on digital twin.

Previous ArticleAs Malaysians reel from the economic fallout of Covid-19, economists wonder if it is time the government sets up a universal social pension
Next Article Antiviral drug a boon for saving patients in ICU – Senior doctor