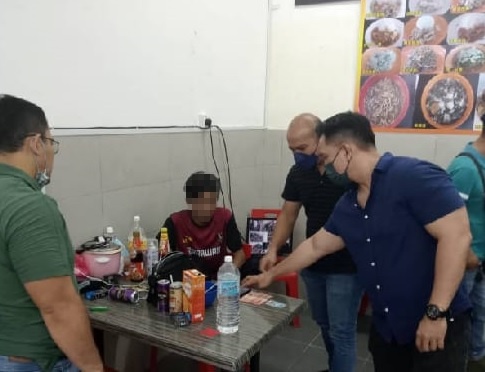 A police photo showing the suspect (seated) being questioned by police personnel prior to his arrest yesterday.

KUCHING (Oct 9): A man was arrested at a premises in Pekan Tondong, Bau for allegedly selling online gambling top-ups at around 5pm yesterday.

Bau district police chief DSP Poge Nyaon in a statement today said that the 30-year-old suspect from Kampung Tabuan Tengah here will be investigated under Section 4(1)(c) of the Common Gaming Houses Act 1953.

“The police during the arrest seized a handphone and cash money,” said Poge, adding that the suspect did not have a past criminal record.

He also added that the police entered the premises and introduced themselves to the suspect before the inspection and arrest was conducted.

If found guilty by the court, the suspect may face a fine of not less than RM5,000 or jail for not more than three years.