Wednesday, December 1
You are at:Home»Features»From pencil artwork to RM1,700 painting

Artist continues to learn and improve drawing skills, and able to strike fine balance between family, profession and passion 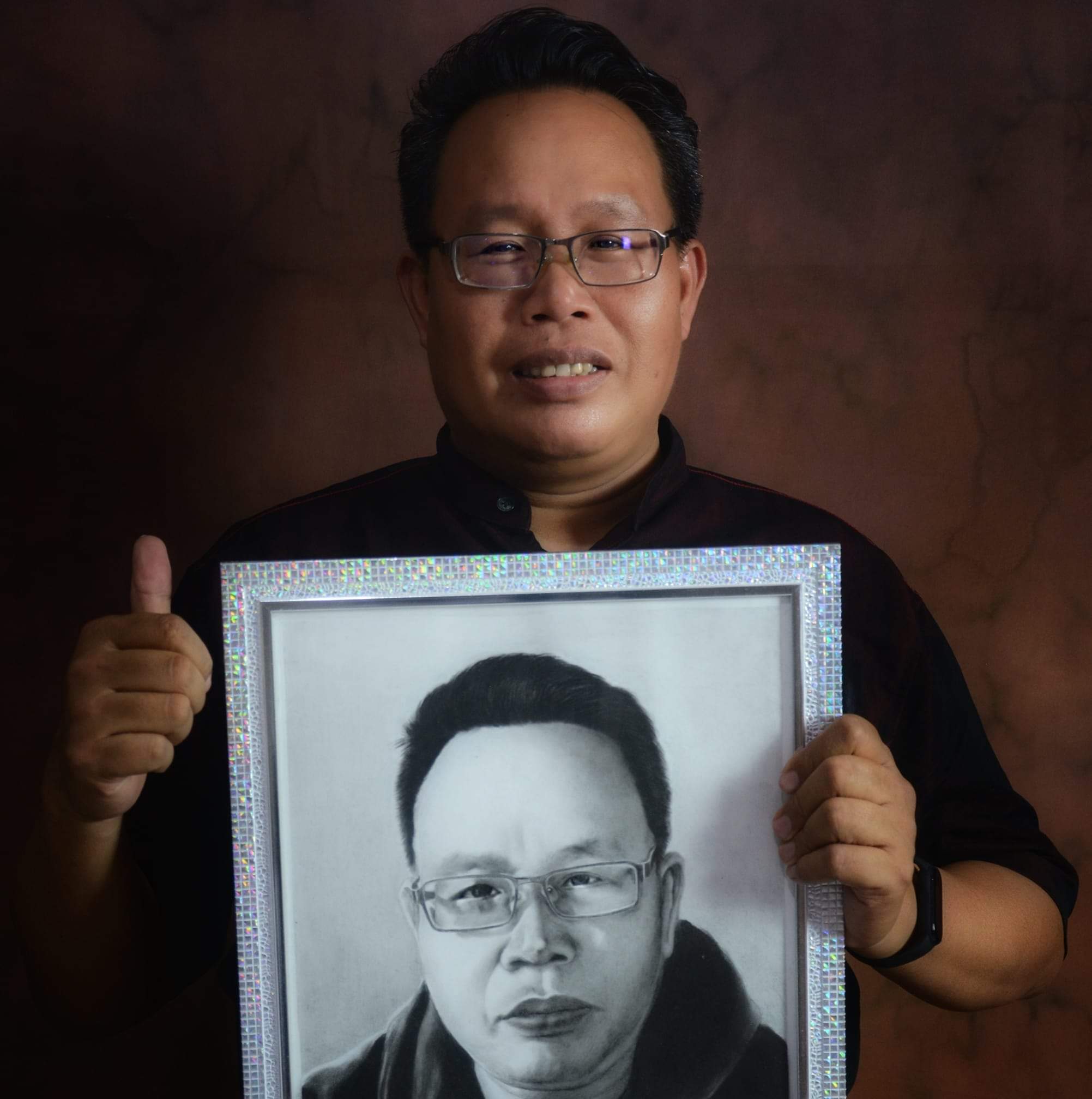 SINCE he was a boy, Bolhan Basah has always known that he could make money out of his passion in the visual arts.

He started drawing people’s faces when he was seven. At the time, he was still living in Kampung Pinang, Kota Samarahan.

“I was like any other kids in the village, but one thing that differentiated me from them was my talent in drawing.

“I’m not ashamed to admit it – I do have talent in drawing,” said the 51-year-old state civil servant, who is the fifth out of six siblings.

Bolhan said he was the only one in his family who enjoyed and had talent in drawing and painting.

“I basically learned how to draw on my own.

“At primary school, we had an arts teacher, but there’s nothing much to be learned then.

“It was only in secondary school that I picked up a few tips and tricks from the arts teacher there,” said this farmer’s son. 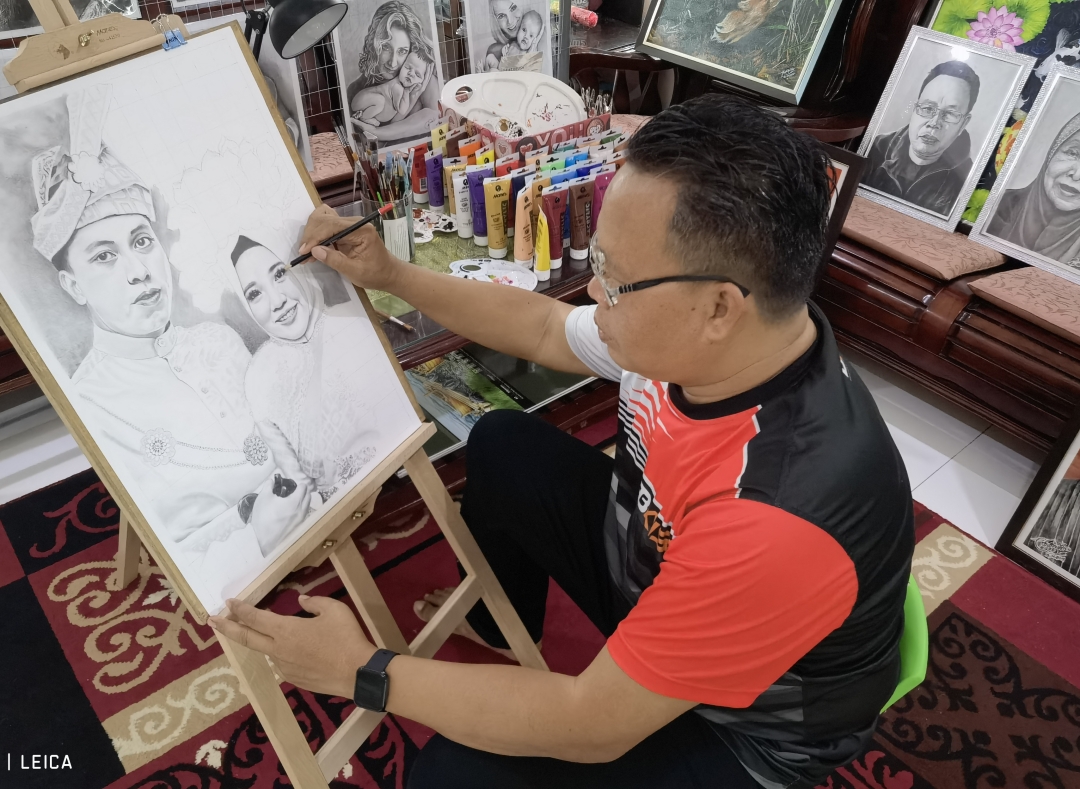 The artist works on his drawing sheet at his house in Tudan.

He began with black-and-white pencil artworks, which he then sold to his peers and also to the villagers who really supported his passion.

This continued on, and after getting married in 1995, more or more orders came in.

At the time, he was already into his second year at the Land and Survey Department, where his main duties were photo-processing and developing microfilm duplicates.

“Although I had a permanent job, I never gave up on my passion,” he said, adding that he continued to draw and paint for his clients back then, the majority of whom comprised his friends and family members.

He said regarding his drawing skills, everything had always been a ‘trial-error process’.

“Even at this age, I’m still learning and striving to improve my skills.

“Nowadays, I would run research on the Internet, or refer to works of other well-known artists, to draw inspiration from,” he told thesundaypost when met at his house in Tudan, near Miri. 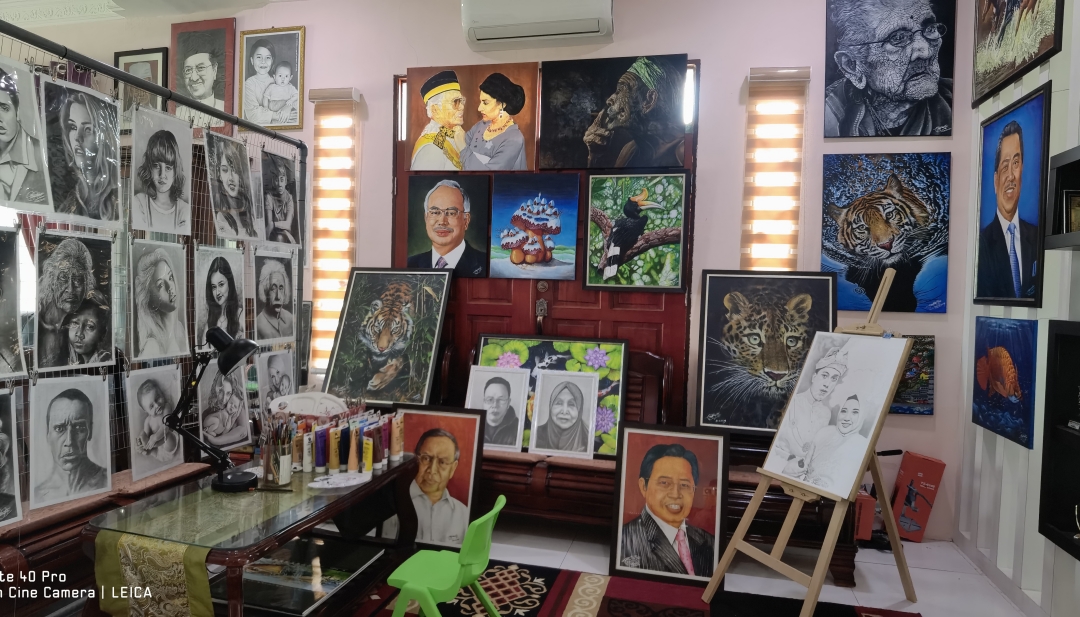 This section in Bolhan’s house is dedicated to producing and storing all his artworks.

However, it was after his transfer to the Information Department Miri Office in 2009 that Bolhan began to draw and paint less frequently than before.

At the time, he was the appointed the photographer of the department.

“Somehow, I was ‘directed’ into doing something that was somewhat related to my interest.

“I think there’s not much difference between photography and painting,” he said.

However, being a photographer left Bolhan with not much time to spend on painting.

“Because I was busy with my full-time work as a photographer, I had put down my pencils and watercolours for a while – I just couldn’t focus,” he recalled.

It was in 2018 when the spark reignited and since then, Bolhan has been able to maintain a fine balance between his family, his work and his passion.

“In fact, I have been drawing and painting a lot more in these recent years than during my younger days, especially throughout this period of Covid-19,” he said.

When asked about which part of the human body that he found the most difficult to draw, Bolhan immediately blurted out: “The nose!”

“It took me many processes and practices to ‘master’ the nose part. It had been difficult, but then, I managed to master it,” he smiled.

Of his many paintings, he said the most challenging one that he had ever undertaken was an old man’s portrait. 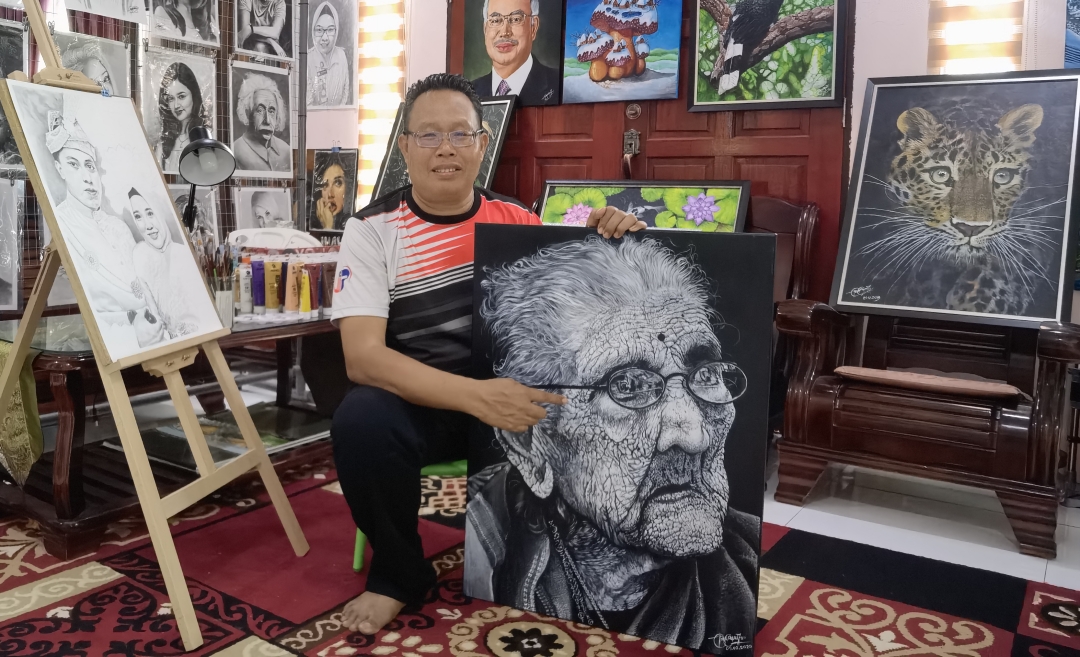 Bolhan shows the old man’s portrait, which he regards as ‘the most difficult artwork’ that he has ever undertaken.

“It was because of the many wrinkles on his face, but I managed to get that done too,” he smiled again.

Another major accomplishment that would pull another grin on Bolhan’s face would be his two paintings, currently on display at Pustaka Miri.

Each of these two artworks fetched a commendable price of RM1,700. 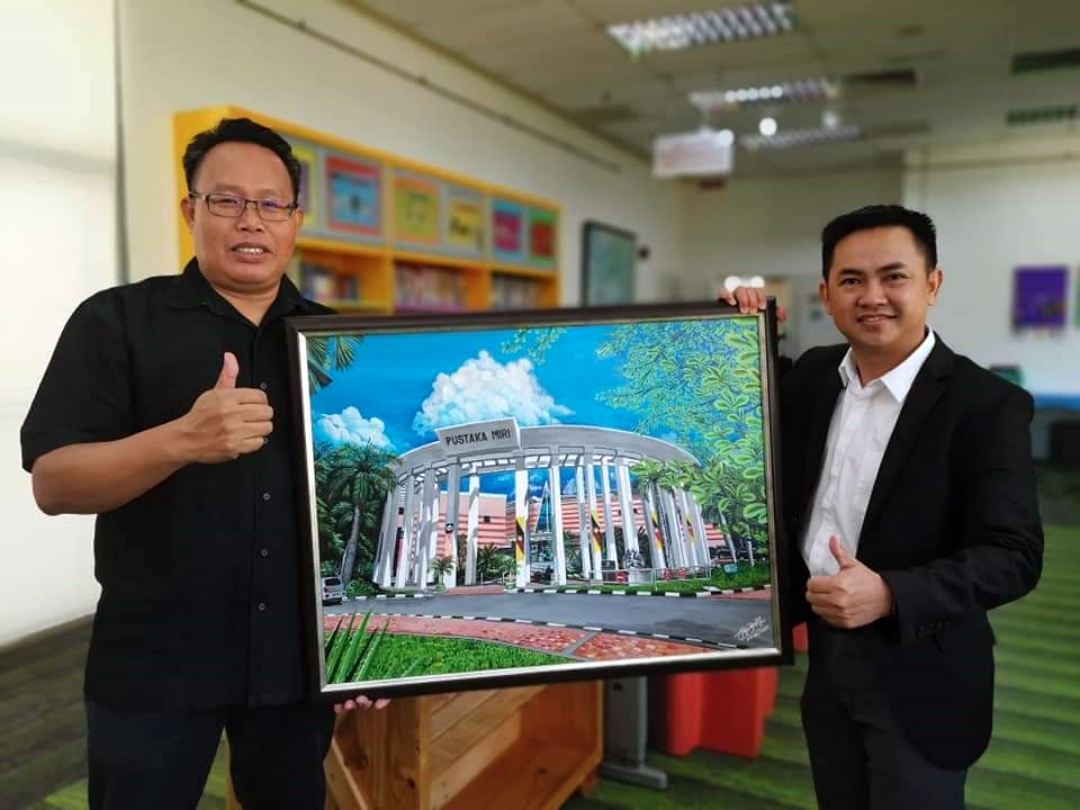 Today, Bolhan is not the only artist in the family. His youngest daughter Aqilah Basyirah, 17, seems to have the same passion and talent in drawing.
“I cultivated this interest in her since she was very young; she seems to still enjoy it,” said the beaming father.

However, Aqilah is more drawn to anime characters as the subject of her artwork, which poses no problem whatsoever to Bolhan. 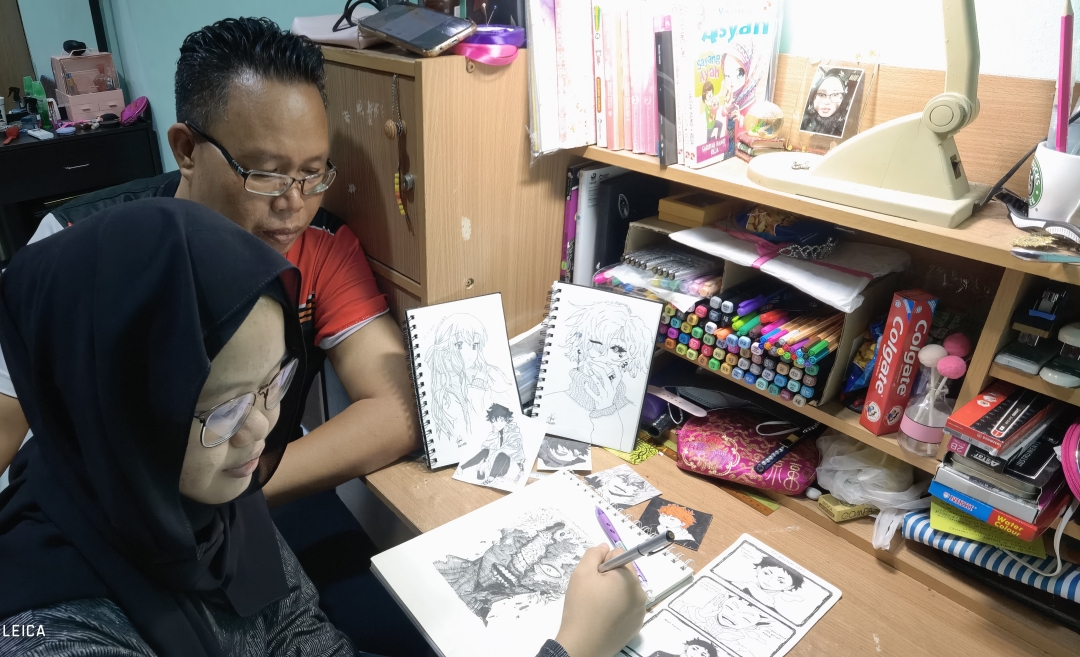 “Whether it is anime or something else, as long as she is doing that she is passionate about, I’m happy because now, I have someone in the family who shares the same passion with me.”

Aqilah said growing up, she had always admired her father’s paintings.
“I’m always amazed to see my father spending his leisure time drawing and painting.

“As for myself, when I was younger, I’d use pencils, watercolours or crayons to sketch anything I liked, but as I got older, my interest began to shift to drawing only anime characters.

“I love watching anime series on television; that’s where I draw my inspiration from,” said the girl, who would be sitting for her Sijil Pelajaran Malaysia (SPM) examinations either end of this year, or in March next year – depending on the announcement by the Ministry of Education. 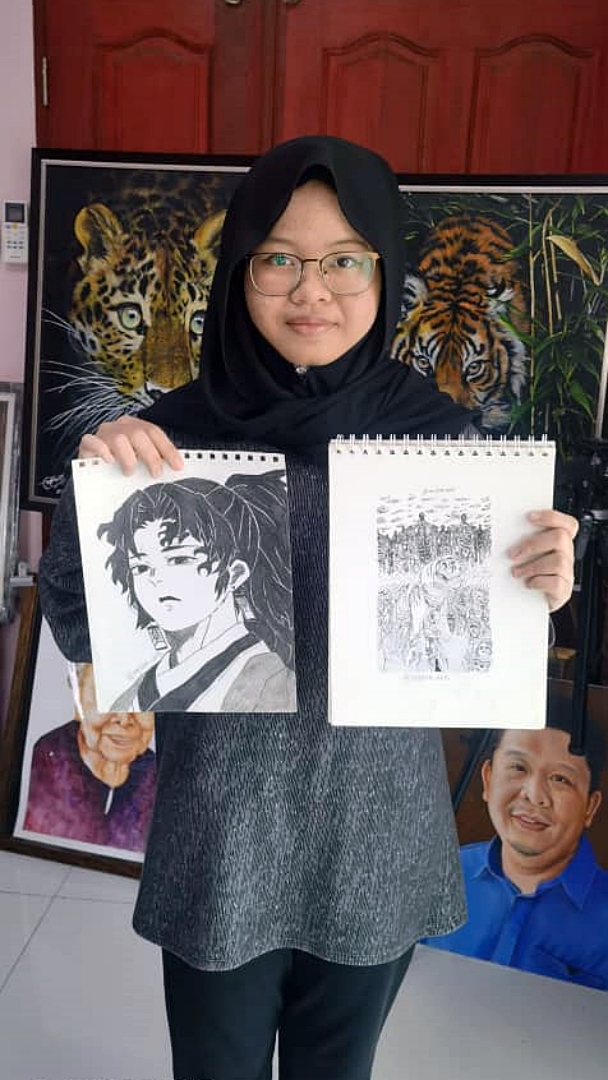 Aqilah shows some of her anime drawings.

However, Aqilah said she had no intention of going professional as an artist.

“I want to pursue tertiary education, either in the field of teaching or law.

“I would never stop drawing, though; I would do it during my free time because it’s my passion.

“I just don’t see doing it professionally in the future,” she added. 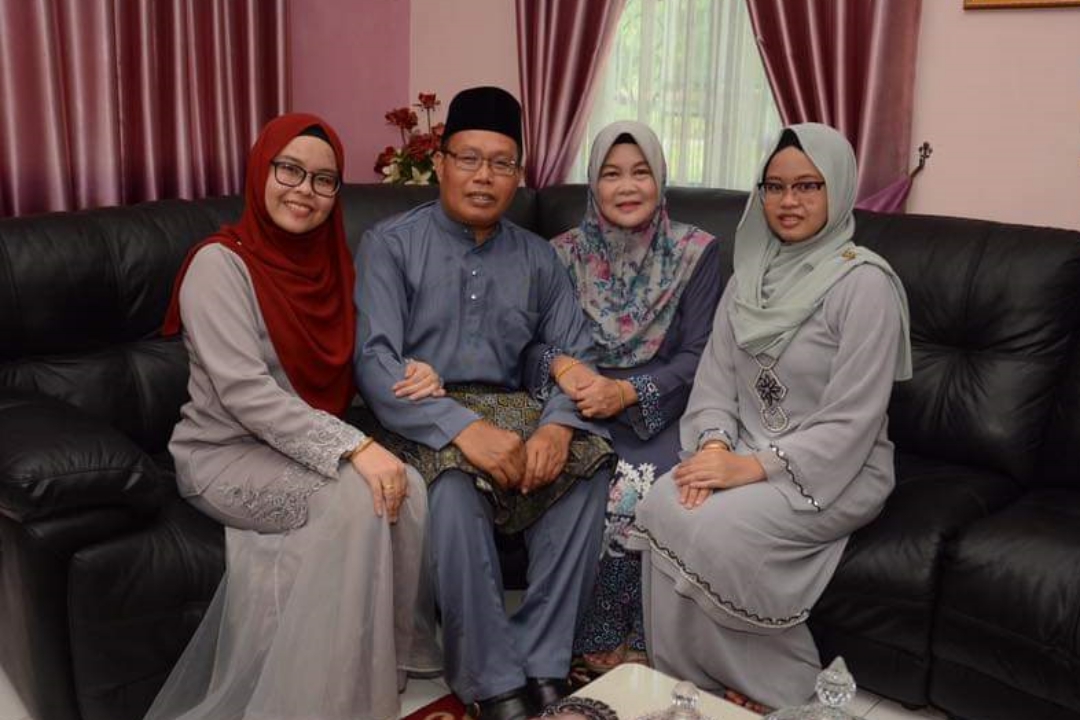 Bolhan with his family – (from right) Aqilah, his wife Napisah Tamin and the couple’s eldest daughter, Nurul Syafiqah.

Previous ArticleChampioning a crusade steeped in sacrifice
Next Article PSB to help nurseries, pre-schools, kindies if in power