Tuesday, August 16
You are at:Home»Columns»Nature Matters»The sands of time are rapidly running out 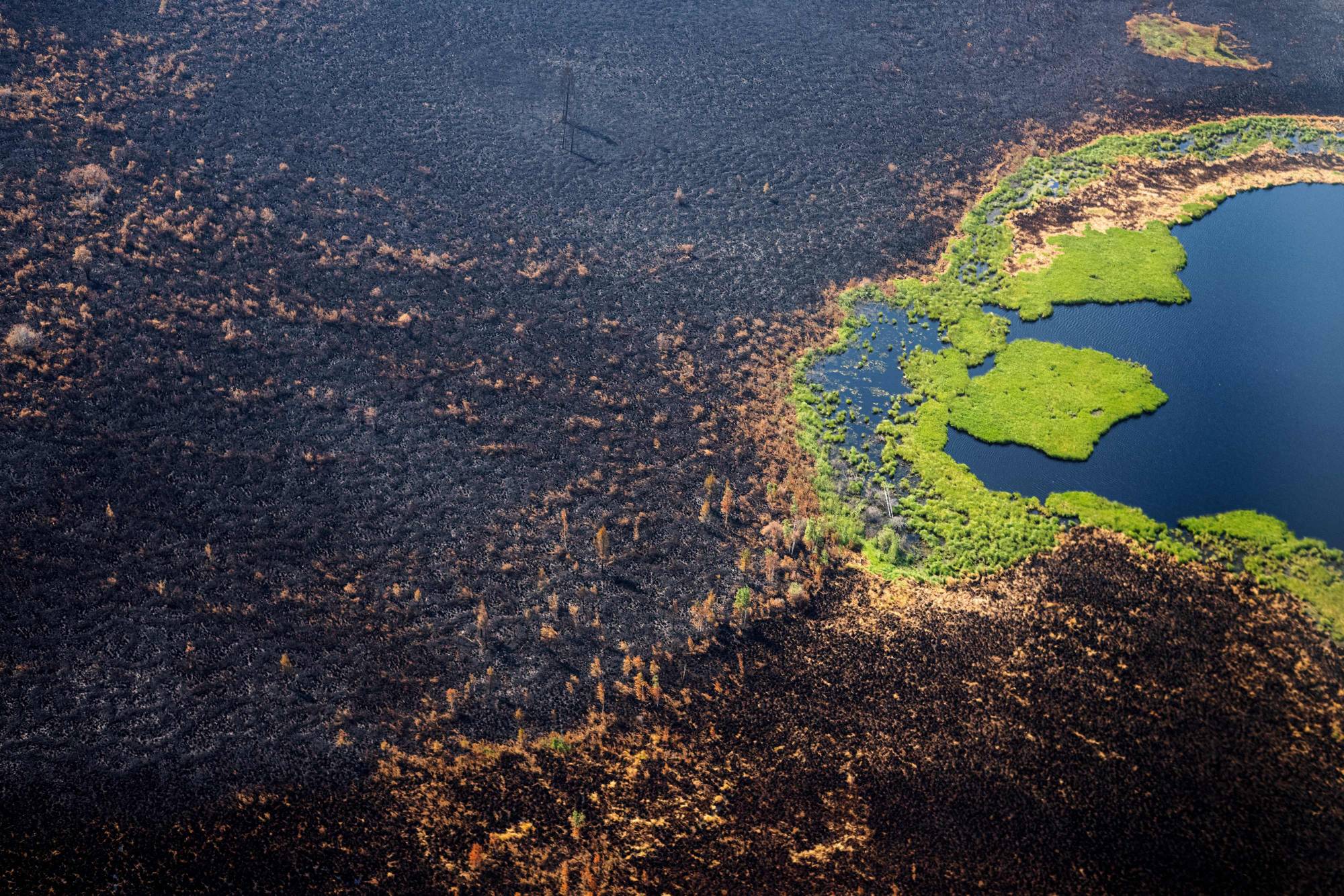 A burned forest in the Gorny Ulus area west of Yakutsk, in the republic of Sakha, Siberia. – AFP photo

WHILE the clocks rapidly tick away to the Oct 31 to Nov 12 Conference of the Parties (COP) 26 summit in Glasgow, where 196 world leaders will meet to discuss and formulate their national resolutions to combat climate change and limit global warming to 1.5 degrees Celsius, I should like to provide some ‘snapshots’ of what has been happening to our planet’s weather so far this year.

Climate change is a stark reality and we rely on the world’s nations to halt the race against time before we reach a state of Armageddon. The United Nations Intergovernmental Panel on Climate Change (UNIPCC) stated in August that humans were unequivocally driving global warming and the effects were already being felt, to include more extreme heatwaves and wildfires, floods, hurricanes, typhoons, rising sea levels, and plagues of insects.

Vast fires have been seen in California, Oregon, Siberia, Turkey, Greece, Israel, Australia, and Algeria with smaller, but nonetheless devastating, fires in the UK and Southern France. These have been fuelled by heatwaves resulting in Siberia experiencing its worst drought in 150 years of weather recordings. Russian scientists have blamed these fires on global warming as that country’s temperatures are rising 2.5 times as fast as the rest of the planet. Since May, the Siberian wildfires, in the Yakutia region, have covered 9,310,000ha and pumped 800 million tonnes of carbon dioxide into the atmosphere, more than the annual emissions of Germany, Europe’s biggest polluter.

This region of Russia is entirely located on permafrost but rising temperatures have caused melting, resulting in the subsidence and shifting of buildings and, indeed, the land surface. With winter temperatures as low as minus 55 degrees Celsius and summer temperatures exceeding 35 degrees Celsius, the rising summer temperatures have released enormous quantities of carbon and methane, which have been trapped for thousands of years in the permafrost, into the atmosphere. Toxic smoke entrapped in the air contained 95 times the safe levels of PM2.5 (particle matter with a diameter of less than 2.5 micrometres), which then enters the bloodstream, resulting in very serious health problems. Local Russians refer to it as the ‘airapocalypse’!

Globally, over 33,500 deaths per annum are directly caused by wildfire smoke emissions. Hundreds of people have already died in wildfires this year and even more cardiovascular and respiratory deaths are likely. From a recent survey, it has been found that the worst country is Japan with 7,000 deaths per year, South Africa experiencing 5,300 deaths, Thailand – 4,300, and the USA – 3,200. Wildfire smoke can spread as far as 1,000km from a fire’s source.

In 2018, the rapid melting of the permafrost revealed a fully fur clad, with whiskers and internal organs intact, cave lion cub over 28,000 years old. Sparta, by her new name, is the best-preserved Ice Age specimen. Yet, as the permafrost melts, infectious diseases such as anthrax could be released into the air. Sadly, in Yakutia, countless bears, elks, reindeer, and wolverines have been lost to wildfires as have brown bears in California and Oregon and koala bears in Australia.

We have seen many scenarios of flooding on our TV screens this year. Even locally, in the UK, a village flooded in South Devon experienced more than a month’s average rainfall in just two hours. In late August, the Greenland ice-cap received seven billion tonnes of rainfall in three days when, for the third time in less than a decade, the summit weather station experienced above freezing temperatures. In 2019, Greenland lost 512 billion tonnes of ice and is thus one of the main causes of a worldwide rise in sea level.

We witnessed news reports of severe flooding in Java and the effects of hurricanes Ida and Larry in Louisiana, New York, and New Jersey. The Washington Post reported that at least 388 people had been killed in the USA by heatwaves, floods, hurricanes, and wildfire sources since June this year. Devastating floods also happened in Belgium and Germany with climate change responsible in creating intensive rainfall, nine times more likely than expected. Over 220 people died as the result of 90mm of rain falling in a single day in the valleys of the rivers Ahr and Eft in Germany. 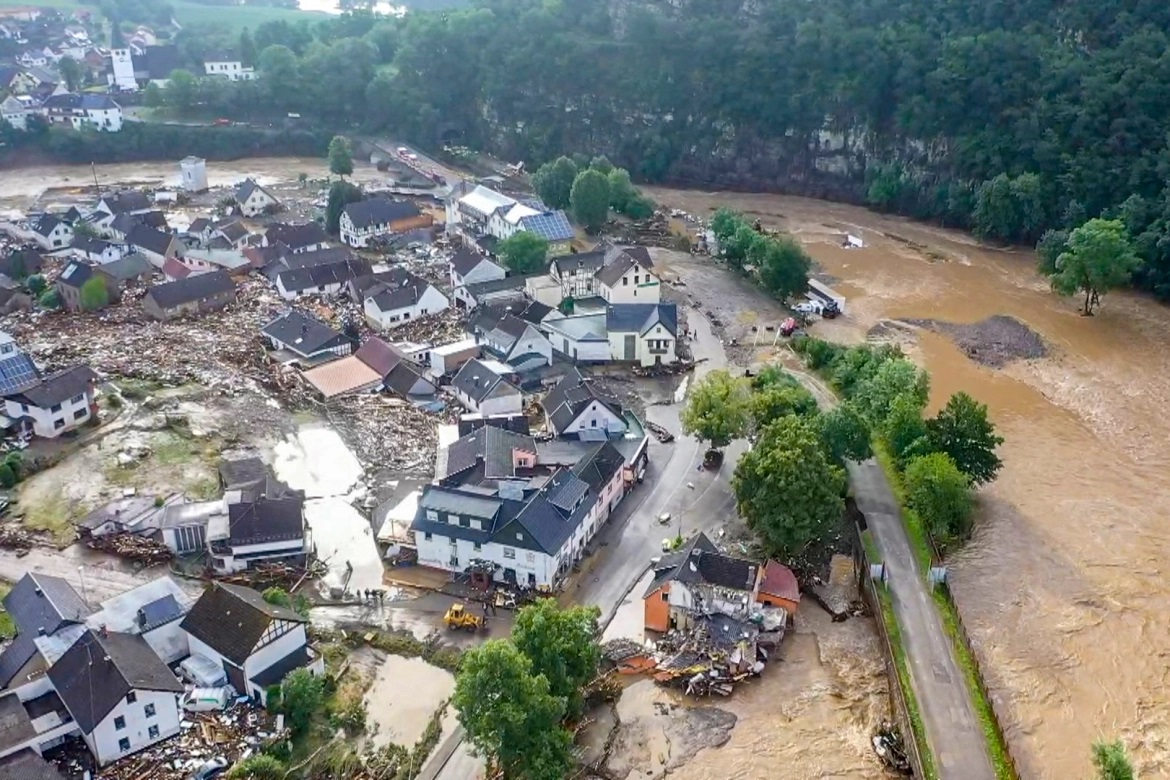 An aerial view of the flooded village of Schuld, near Adenau, western Germany. – AFP photo

The IPCC’s report in August revealed that as temperatures rise, Western and Eastern Europe will experience more extreme rainfall and flooding especially in the summer months. Europe’s five warmest years have occurred in the last seven years. The Arctic ice is melting at an unprecedented rate and for every one degree Celsius of warming the atmosphere is able to hold 7 per cent more moisture. Even in Chile’s Atacama Desert, the driest place on Earth, with 1mm to 15mm of rain on average per annum, deep snow cover was experienced in August with the heaviest snowfall ever recorded. This led to fast snow melt and flash flooding.

There is no doubt now that sea levels are rising as the ocean waters expand due to higher temperatures and the ice melt of the Antarctic and Greenland ice sheets and the Arctic Ocean’s ice. Flood prevention schemes, created today may be obsolete in 10 years’ time! Global predictions for sea level rise (SLR) range between 1.7 to 3.1mm. In Sabah, the projected rate of SLR in 2,100 is 0.69 to 1.06 metres, whilst in Sarawak it is forecast at 0.43 to 0.64 metres. Much depends on the actual locations, be they in low lying areas, river mouths, or estuaries. The actual rates of SLR in mms per annum for the respective stations of Kuching, Sibu, Bintulu, Miri, Kota Kinabalu, Kudat, Sandakan, and Lahad Datu are 4.7, 5.4, 5.2, 5.1, 5.3, 5.3, 4.8, and 4.1.

The impact on coastal communities through the rates of coastal erosion, loss of agricultural land and wildlife habitats is obvious and needs careful planning by national and local governments to reduce the consequences. Extreme sea levels during high tides, ‘king’ tides, and storms need to be built into these equations if coastal communities worldwide are to be assured of protection. We have already seen coral atolls submerged and climate change refugees seeking help.

It is ironic that those nations of our world who are the less atmospheric polluting ones of the developing world are suffering the world’s worst famines driven not by conflict but by climate change. Northern Kenya has experienced swarms of locusts, munching through subsistence farmers’ crops, en route to Somalia. Southern Madagascar has suffered the most, where back-to-back droughts, cyclones, and sandstorms have left 1.1 million people hungry.

By Christmastime this year, this number will rise to 1.3 million people facing severe starvation in a country where 63 per cent of the population are small farmers. In some towns, boiled roots, clay, locusts, and even boiled shoe leather are the only sources of food. Add Covid-19 to this catastrophe and the result is obvious! 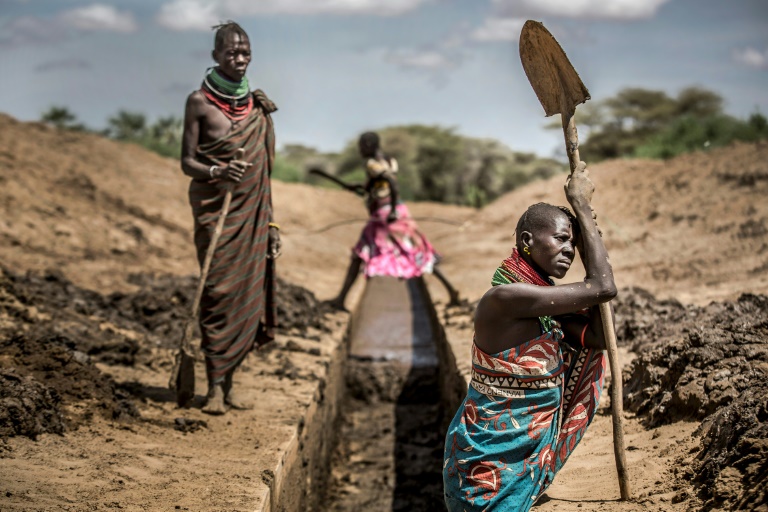 In the developed world, whilst French and British farmers complain of poor harvests in vineyards and wheat fields, what misery exists elsewhere in the developing world? Madagascar, among other developing nations, faces an unprecedented famine of biblical proportions.

Covid-19 and its variants can be contained through effective vaccinations schemes but it will need and cost significantly more than two ‘jabs’ in our arms to combat climate change. Let us hope and pray that the world leaders at the Glasgow COP 26 summit in November will come up with practical suggestions as to reduce atmospheric CO2 emissions. As the old idioms go, ‘Action speaks louder than words’, and ‘Time and tide waits for no man’.