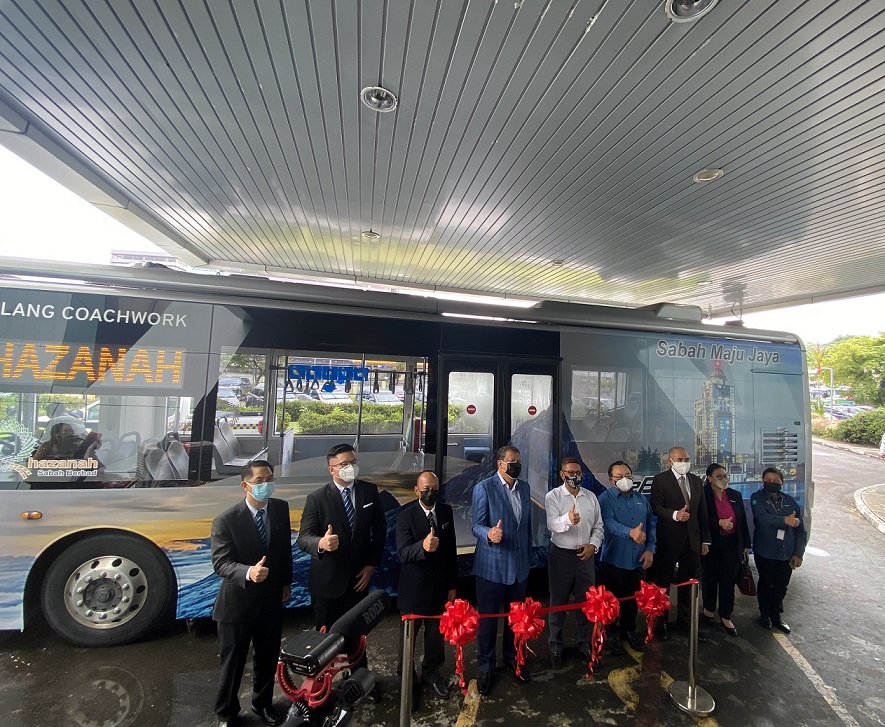 Joniston (fourth left) with the other guest during the unveiling of the e-Bus.

State Tourism, Culture, and Environment Minister Datuk Jafry Ariffin lauded the move to explore the potential of e-Bus as a mode of public transportation in Sabah.

“This is an important development in getting our public transport on the right track for the future.

“The volume of vehicle traffic on Sabah roads is ever-increasing and no one can deny the fact that emissions from conventional vehicles contribute to climate change,” said Jafry during the unveiling ceremony of the e-Bus, here at Wisma Tun Fuad Stephens on Tuesday.

He was represented by his assistant minister Datuk Joniston Bangkuai.

“We must do whatever we have at our disposal to address this dire situation that is an imminent threat to mankind. All around the world usage of electric-powered vehicles is on the increase as they are a more environmentally-friendly way of getting around.

“We must move in this direction,” stressed Jafry.

The e-Bus is expected to be available to the public once coordination works with the relevant authorities have been finalised.

A pilot run is expected to begin by December for the residents in Kota Kinabalu.

The e-Bus can accommodate up to 66 passengers.

On top of that, the e-bus is equipped with boarding ramps for the elderly and disabled.

Given this, Jafry had urged the relevant stakeholders to explore the use of e-Buses further as the mainstay for public transport in Kota Kinabalu and elsewhere in Sabah in the future.

“We must find ways to make this a reality. Though it is now just one e-Bus, let this be a significant starting point for a cleaner and more comfortable public transport system in Kota Kinabalu,” he said.

QSB is planning to provide 100 e-Buses here in the state capital.

“QSB is proud to play a part in the State Government’s drive in promoting green economy, in line with the Sabah Maju Jaya initiative,” he said.

He added that the e-Bus project would help promote a more ecologically sustainable lifestyle while helping to reduce carbon emissions into the environment.

“We at QSB strive for continuous innovation through our strategic investments and to assist the Sabah government in its drive to develop Sabah.

“We are always open to ideas and ever ready to carry out strategic initiatives for the benefit of Sabahans,” added Shukor.