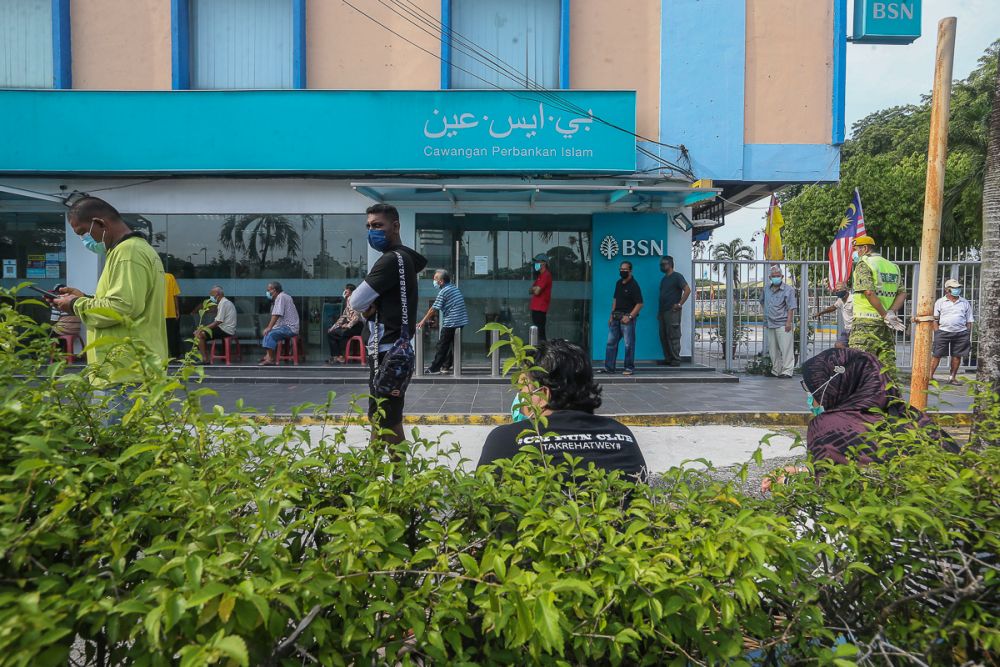 People queue in front of a Bank Simpanan Nasional branch in Klang on Sept 6, 2021. — Photo by Yusof Mat Isa/Malay Mail

KUALA LUMPUR (Oct 14): Pandemic-related spending and the country’s ageing population could weigh on future federal budgets even as efforts to heal the devastated economy weigh on Putrajaya’s operating expenses, the Malaysian Corporation Rating Berhad (MARC) said in a note on the 12th Malaysia Plan (12MP).

MARC suggested that Prime Minister Datuk Seri Ismail Sabri Yaakob’s administration has “grossly underestimated” its opex forecast for the five-year development plan, including failing to consider the effects of prolonged lockdowns and relief spending to curb the fallout caused by Covid-19.

“Besides revenue, there will also be unrelenting pressure from operating expenditure (opex),” the rating agency said in a note on the five year plan.

“The government is projecting opex in 2025 to return to pre-pandemic levels, which we think is grossly underestimated … one, unless all Covid-19-related social aids cease after their expiry in 2023, opex will rise much higher than official estimates,” it added.

“Two, due to economic scarring from prolonged lockdowns, it is improbable that the opex average annual growth during the 2020-2025 period (3.36 per cent) would be lower than the pre-pandemic level during the 2015-2019 period of 4.96 per cent.”

Malaysia’s ageing population is also expected to drive up opex in the coming years with higher emoluments, retirement charges, and health and healthcare-related expenditures, the firm said.

MARC predicted that the federal government would roll out a programme to give direct cash transfers to support those with depleted retirement savings in the Employees Provident Fund (EPF), which will add pressure to Putrajaya’s coffers.

Federal pension payments, which will total RM26.38 billion by 2025 and set to climb further, were also expected to add to the pressure.

EPF recently said up to 60 per cent of its seven million active contributors have less than RM10,000 in both Accounts I and II, with Covid-19 related withdrawals totalling some RM40 billion.

Observers said elder income security has the potential to become a key election issue at the 15th general election that must be held latest by 2023.

MARC said it expected the unemployment rate to remain elevated throughout the 12MP term.

Electoral pressure could also curtail any plans to raise income tax or widen the tax base.

MARC said it expected corporate and personal tax rates would remain while the return of the Good and Services Tax (GST) is uncertain based on declining revenue-to-GDP growth projection over the five year period.

Putrajaya forecasted government income to GDP would drop to 13.5 per cent from 15.9 per cent in 2020.

“We think the reasons for this expected revenue projection include, among other things, falling oil revenue, limited revenue sources to draw on, and revenue leakages,” the agency said.