Thursday, January 27
You are at:Home»News»Sabah»Penampang flood victims struggle in aftermath of sixth flood this year 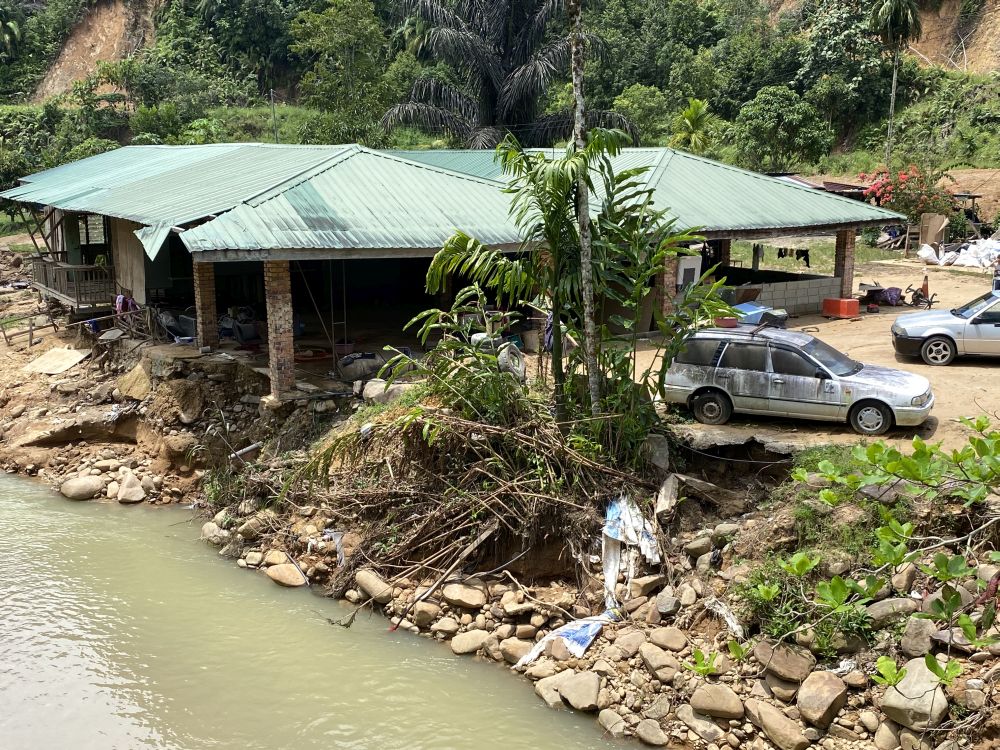 The riverside home where Andy lives with 10 other people, including six children, has been repeatedly ravaged by floodwaters. — Photo by Julia Chan/Malay Mail

KOTA KINABALU (Oct 14): Andy Verus and his extended family have built their dream family home on the outskirts of the state capital — at the foothills of the mountainous Crocker Range, and alongside the cool, clear waters of the Timpangoh river.

The 40-year-old farmer stays with his wife’s family on the shared land in Kampung Timpangoh Laut, in Sugud, Penampang, a 30-minute drive to the Kota Kinabalu International Airport, where they enjoy an idyllic village lifestyle with easy access to the city.

This month, their dream turned into a living nightmare as their home was hit by floods… for a total of six times.

Each time, the trail of destruction has been immense, but none worse than on the eve of Malaysia Day, which saw one car being swept away while the others were damaged, as flood waters destroyed their home appliances and tore through wooden flooring and walls.

Almost a month later, just two nights ago, as they were completing cleanup and washing the muddy remnants of the floods, another bad weather spell, brought on from the tail of Typhoon Kompasu tore through their home yet again, leaving behind more mud and damage.

“This time we packed our stuff up early, and got ready to move as soon as the downpour began,” said Verus, recalling the 1.30am start of the storm. 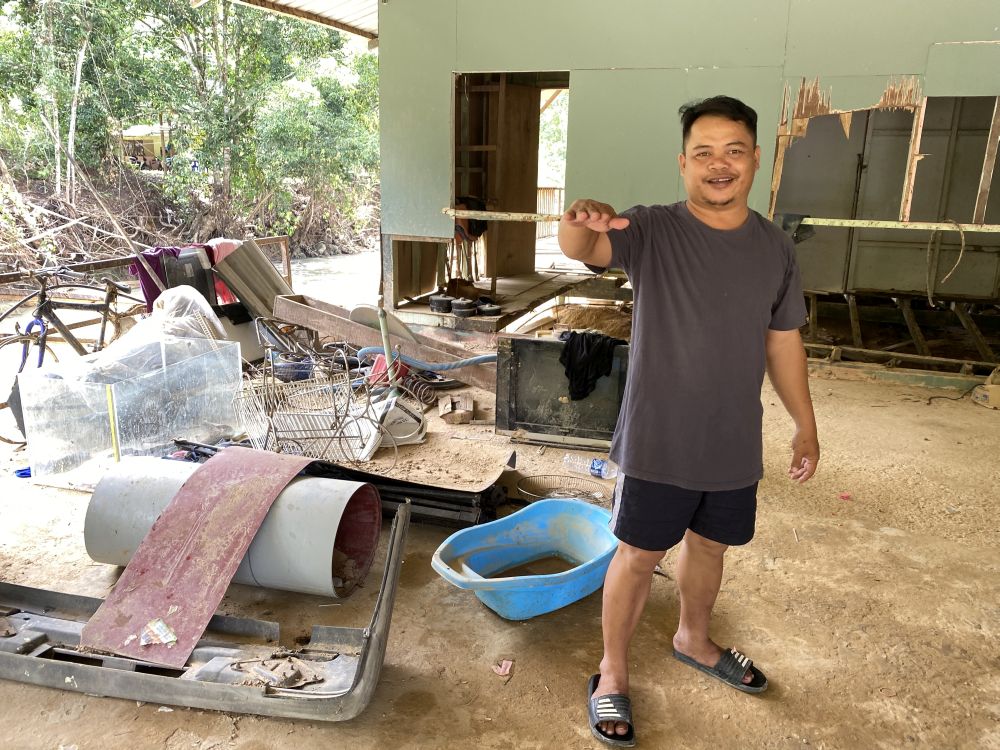 Andy indicates the height of the water level during recent floods. — Photo by Julia Chan/Malay Mail

“It’s some kind of trauma now for sure,” he said, while recalling how fast the stormwater had rushed down, filling up the river at high speed and how the family had to scramble to save their valuables and find safety.

The flood and landslides came thick and fast in the early hours of the morning and soon reached some 1.5 metres high, enough to reverse the family’s efforts to clean up the damage earlier.

The family, mostly Verus’ wife’s siblings, began building their shared home some eight years ago on the land, in addition to the main home where his in-laws live, and for the past eight years, their family grew and soon, three families, including six children, were living in the large home, where dogs and chickens roam about freely.

Floods have begun inundating many parts of the state, but Penampang has been particularly badly hit, with rivers and drains overflowing even after just a few hours of rain.

Sugud was the epicentre of the floods last Sept 15, but the state has been adversely affected by six floods this year including three over the last 30 days.

Authorities acknowledge that indiscriminate development, including that of the mega Pan Borneo Highway project, may have significantly contributed to the sudden change in flood patterns, but Penampang, just outside of the state capital, is also developing at a rapid rate.

The villagers of Sugud and its surrounding area have borne the brunt of the development and seen floods like never before, taking weeks to clean up, even with help, with water and electricity cuts increasingly frequent.

It has been a brutal emotional rollercoaster for the families who were near recovery from the September 15 floods only for the storm hit again. 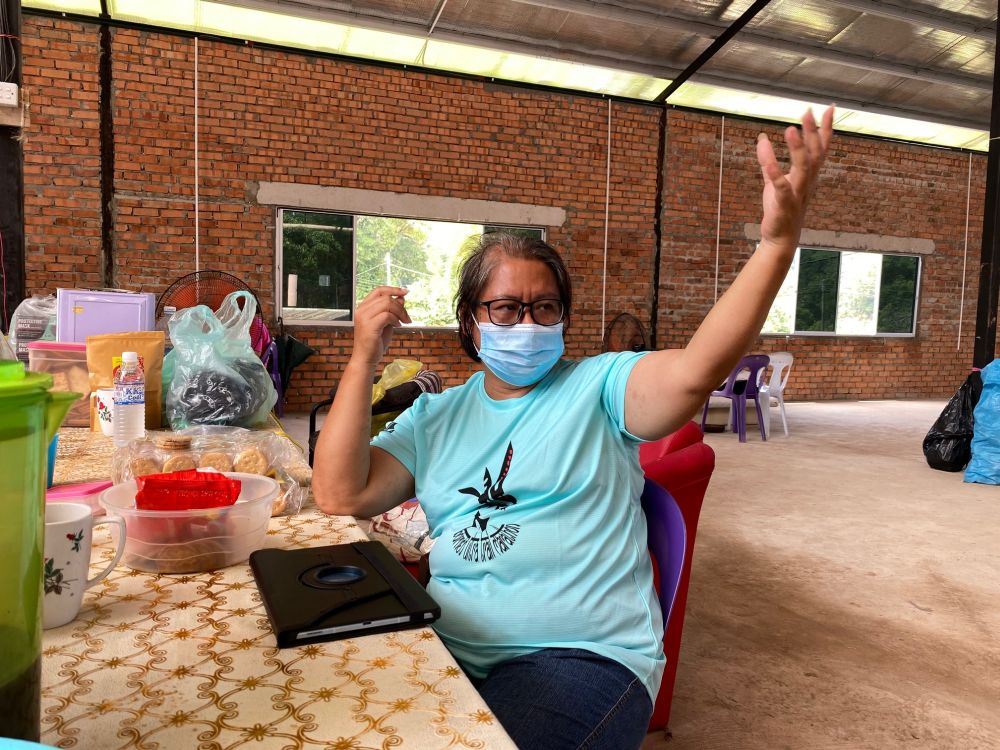 Decy estimated some 2,500 villagers have been directly or indirectly affected by the floods. — Photo by Julia Chan/Malay Mail

Decy Ebol, a local Sugud resident and chief volunteer coordinator for the relief effort released a heavy sigh as she recalled the clean up her team had endured for almost a month now.

“We have cleaned up maybe some 60 per cent of the houses to some form of liveable condition… but there was more rain again two days ago and now we are set back again,” she said, adding that she has hired excavators and tractors for a month to help with cleaning and clearing of debris.

She estimated some 2,500 villagers living in some 750 houses have been directly or indirectly affected by the floods as her team gathered information on recipients for donated foodstuff, bottled water, kitchen utensils, clothing, mattresses, pillows, blankets, wheelbarrows, shovels among other things.

“People are still asking for food baskets and other assistance. Of the residents here, most are facing hard times anyway, either poor or getting laid off, so they will need aid. We are also still getting the support and donations almost daily,” said Ebol.

She also estimated that some 50 per cent of the houses remain without electricity or piped water as authorities are struggling to reconnect their utilities.

Last month, the Sabah government said it needs RM481 million to finally put an end to the flooding issues plaguing Penampang and Putatan.