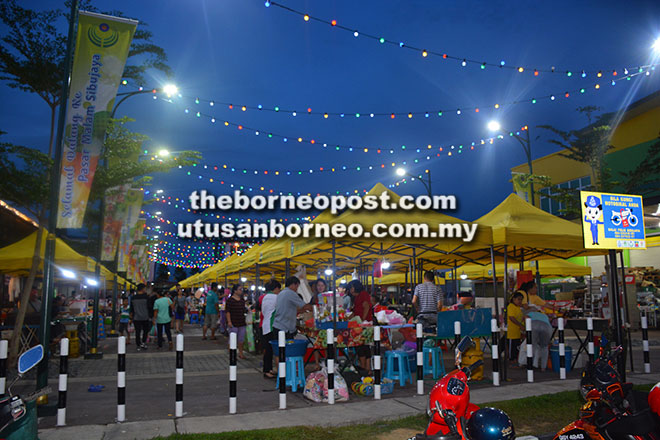 File photo shows a night market in Sibu Jaya. The new township has a population of over 33,000.

SIBU (Oct 15): The new township of Sibu Jaya, which has grown to a population of over 33,000, is in desperate need of more schools, said Senator Robert Lau.

He pointed out there is currently one government primary and one government secondary school with 1,855 and 2,265 students respectively, while the Chinese-medium SJK Thian Hua has 750 pupils.

“The school is overcrowded too with nearly 60 per cent of students being Iban, all of whom are first generation rural urban migrants.

“The desperate need for more schools has been known by the local education officers. Two schools had been approved to be built in Sibu Jaya under the 10th Malaysia Plan. Sadly, there is no news and it just remains a plan despite being approved more than 10 years ago. I have asked last year and this year on the progress of the proposed two schools, so far, there is no positive reply,” he said while debating the 12th Malaysia Plan (12MP) in the Dewan Negara yesterday.

According to him, five-year plans, particularly for Sarawak and Sabah, just remain plans without implementation.

Lau said Sarawak still has dilapidated school buildings handed down by British and Brooke rule, while digital connectivity is either not available or at insufficient speeds in rural schools.

He noted the 12MP acknowledged problems due to climate change and rural–urban migration.

“Sibu has a huge issue with rural-urban migrants. They stay in dilapidated houses and suffered the most from Covid-19. Some of them have been staying in these rundown areas for two generations already.

“There is an acute lack of affordable housing in Sibu. Yet there is no concrete plan or funding to deal with this real problem on the ground,” he said.

He questioned how many affordable houses had been approved for Sibu and the central region of Sarawak to cater to rural migrants.

Lau stressed that migration to urban areas would continue due to employment opportunities, which are usually low skilled and low paying.

“There is no proposal in the 12th Malaysia Plan to tackle this critical issue of low-quality jobs and lack of skills training.

“There is a need for more TVet (technical and vocational education and training) to be set up in the central region of Sarawak,” he suggested.

Previous ArticleHealth Ministry sees Covid-19 deaths rise to 88 in the past 24 hours, Kelantan has most new cases
Next Article Lau calls for railway linking Sarawak and Sabah