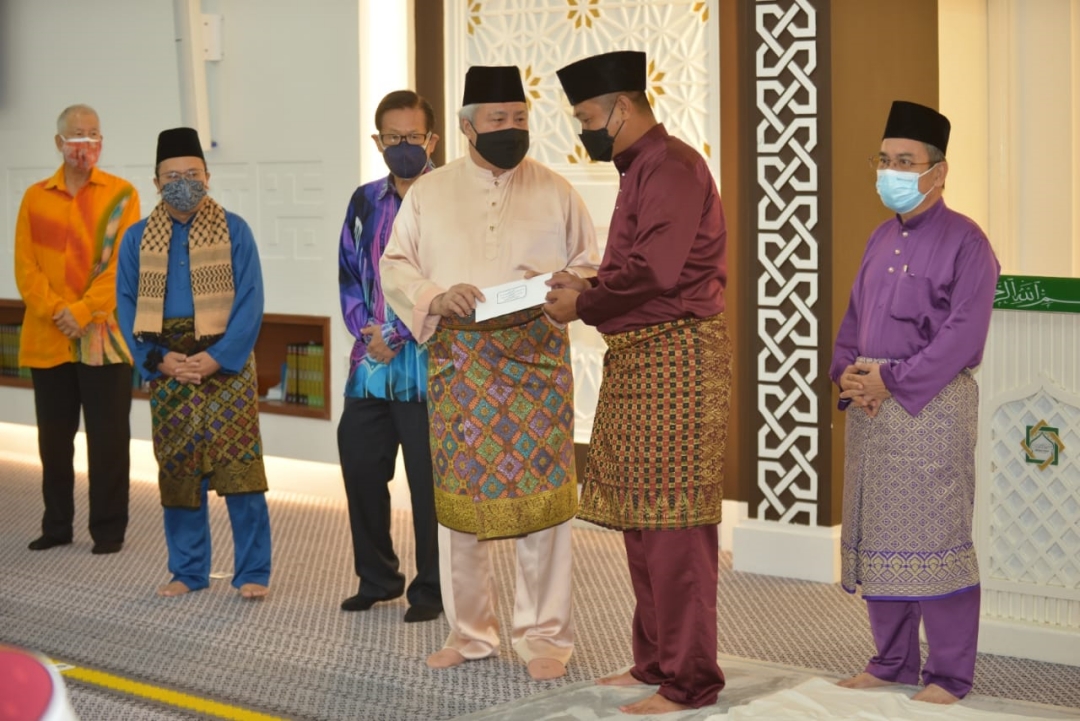 Awang Tengah (centre) presenting a gift of appreciation to one of the undertakers for their sacrifices in helping Muslim families send and bury their loved ones who died during Covid-19 pandemic.

MIRI (Oct 21): Islam advocates a progressive and harmonious way of life in a plural society based on the teachings of the Quran, said Deputy Chief Minister Datuk Amar Awang Tengah Ali Hasan.

He said this is reflected in the exemplary leadership of Prophet Muhammad who led the way for idealism and noble aspirations to produce a civilisation of the people with awareness and prosperity in a country with a plural society.

“The pluralism of Madinah is the same as our state of Sarawak. Thus, we take a lesson from the story of the Prophet Muhammad SAW in managing a country with a plural society,” he said in his speech at Miri Division Maulidur Rasul celebration at Masjid At-Taqwa on Tuesday night.

He also said the Sarawak government strives to ensure that every group and race in the state receives fair treatment in every aspect; the welfare of the people in the economic and legal fields, politics, social culture, education, nationhood, the arts and others.

“Islam as a way of life is not rigid or extreme but simple and flexible in practice,” he added.

He said Prophet Muhammad’s exemplary leadership and contributions continue to expand beyond his death which led to the golden Islamic Civilisation and Islam being practised by over one billion followers presently.

Muslim scientists during the golden age of Islamic Civilisation combined knowledge, religion and science, he added.

Awang Tengah said their analyses were not purely empirical and rational but based on the science of revelation (Wahyu) and figures such as Al-Biruni, Ibn Sina, Abu Qasim Az-Zahrawi made the Quran a guide to explore the fields of science, mathematics, medicine, surgery and branches of other knowledge.

These Islamic sciences later became a source of reference and were translated into Latin, Hebrew and other European languages that led Europe to undergo a process of reform, renaissance, Industrial Revolution and eventually become a conquering or colonial power.

Awang Tengah said the Sarawak government needs competent people to be able to contribute together in the current rapidly evolving advances in science and technology, including the search for vaccines or cures for Covid-19.

Before joining congregants for prayers, he presented gifts of appreciation from the mosque to undertakers who helped families conduct the final rites and burial of those who died during the Covid-19 pandemic.