Wednesday, May 18
You are at:Home»News»Sarawak»Awang Tengah bullish on Sarawak’s ability to attract FDI 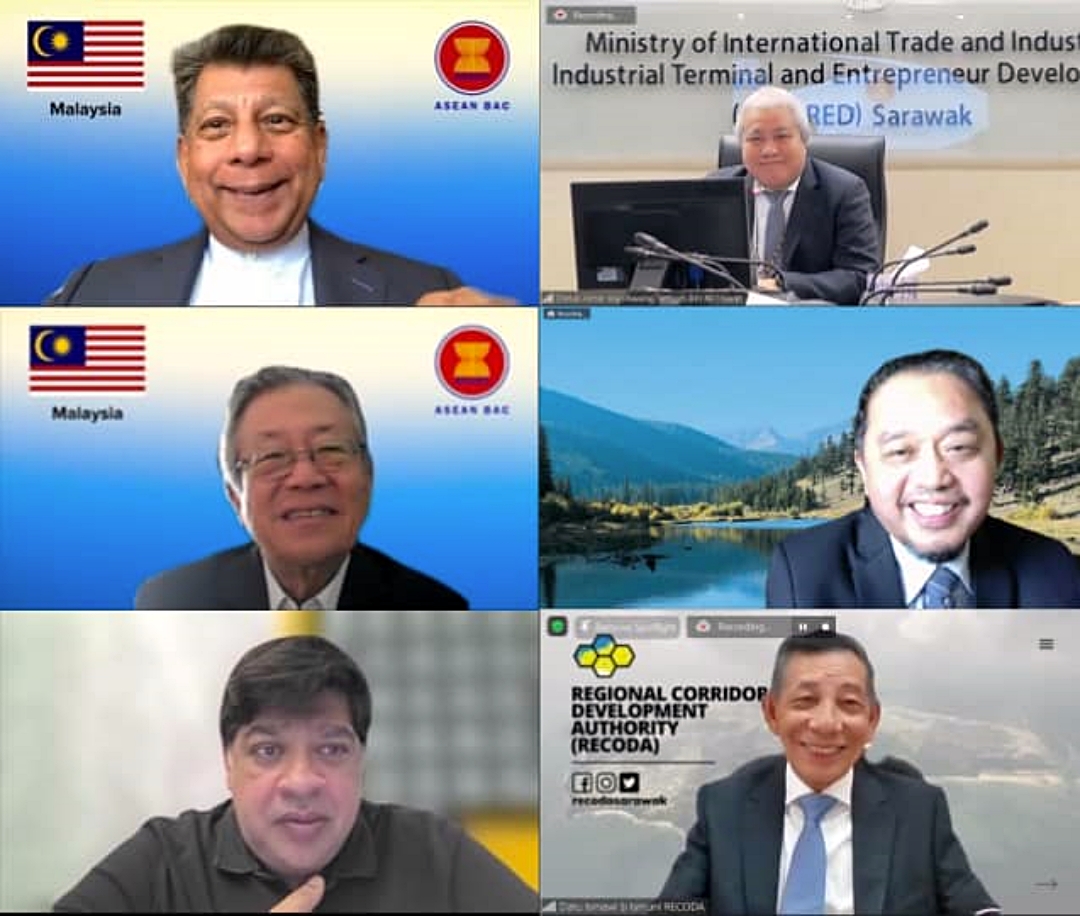 Awang Tengah (top right) and others during the virtual meeting.

Speaking at the Asean Business Advisory Council Malaysia – Consultation Meeting With The Sarawak State Government and Agencies which was held virtually yesterday, he said among Sarawak’s advantages were its strategic location within the Asean region, abundant natural resources, political stability, business-friendly policies and efficient civil service.

“Sarawak holds 54 per cent of Malaysia’s natural gas reserves and 29 per cent of the national crude reserves. While the exports of these crude oil and LNG have generated much income for Malaysia and the state, Sarawak would like to create more high-value petrochemical downstream activities,” he said.

He said moving forward, Sarawak wants to encourage more high-value downstream activities not only for oil and gas but for other mineral resources such as silica sand, rare earth elements (REE), and kaolin clay.

Awang Tengah, who is also International Trade and Industry, Industrial Terminal and Entrepreneur Development Minister, said apart from federal tax incentives such as Pioneer Status, Investment Tax Allowance and Reinvestment Allowance, Sarawak is able to offer substantial non-tax incentives such as competitive tariff for power and water as well as competitive land premium with flexible terms of repayment and 30 per cent rebates on land premium for early completion.

“With the availability of these natural resources, coupled with the abundance of hydropower resources, Sarawak is an attractive destination for petrochemical and energy intensive industries, high-tech as well as green hydrogen.

“For the record, Sarawak has been one of the top investment destinations for the manufacturing sector in Malaysia for the past many years. Last year, Sarawak was ranked number two with investment value worth RM15.7 billion,” he said.

At the same time, he said Sarawak also aspires to be a net food exporter by 2030, which the state aims to achieve through commercial agriculture that capitalises on modern farming and global partnerships.

Among the key initiatives is developing agro-parks, smart farming and high value downstream products such as oleochemical, he added.

On tourism, Awang Tengah said the state is focusing on eco-tourism and business events in the Asean region as well as promoting health tourism, sport tourism, agro-tourism and education tourism.

In the forestry sector, he said forest management practices and stewardship will focus on balancing the rate of deforestation and growth, increasing product yield and enhancing services obtained from forests.

“In addition, sustainable approaches to monetise Sarawak’s rich resources will be implemented to provide economic opportunities for the rural communities.

“Our focus will be on high value-added products such as furniture, engineered wood and pulp paper. In this regard, we are planning to set up furniture parks in Kuching and Tanjung Manis,” he said.

According to him, the state government is currently embarking on the Post Covid-19 Development Strategy (PCDS) 2030 to propel Sarawak to be a developed state by 2030.

He said the strategy is driven by data and innovation where everyone enjoys economic prosperity, social inclusivity and sustainable environment.

He also said that Sarawak has been playing an active role in Brunei-Indonesia-Malaysia-Philippines East Asean Growth Area, or BIMP-Eaga, since its establishment in 1994.

He said through BIMP-Eaga, Sarawak has been focusing on key sectors such tourism, infrastructure, energy, agribusiness, environment, telecommunication and Information and Communications Technology (ICT).

“Currently, Sarawak exports an average of 122MW to West Kalimantan. We have also committed to supply up to 50MW to Sabah and we are still negotiating with Brunei Darussalam on the interconnection project.

“Sarawak Energy Berhad (SEB) is currently collaborating with an Indonesian company to develop hydroelectric project in North Kalimantan,” he revealed.

He also said that Sarawak through Sacofa is working with its counterparts in Brunei and Indonesia to provide better telecommunication connectivity by leveraging on their respective networks.

He also believed that the Asean Economic Community (AEC) will benefit Malaysia through the creation of a single market of more than 600 million consumers, with free flow of goods, services, investments, capital and skilled labour within Asean member countries.

“This will benefit Sarawak particularly as we have common borders with Kalimantan Indonesia and Brunei Darussalam.

“With the intended move of the Indonesian capital to East Kalimantan, there will be plenty of business opportunities for both countries,” he said.