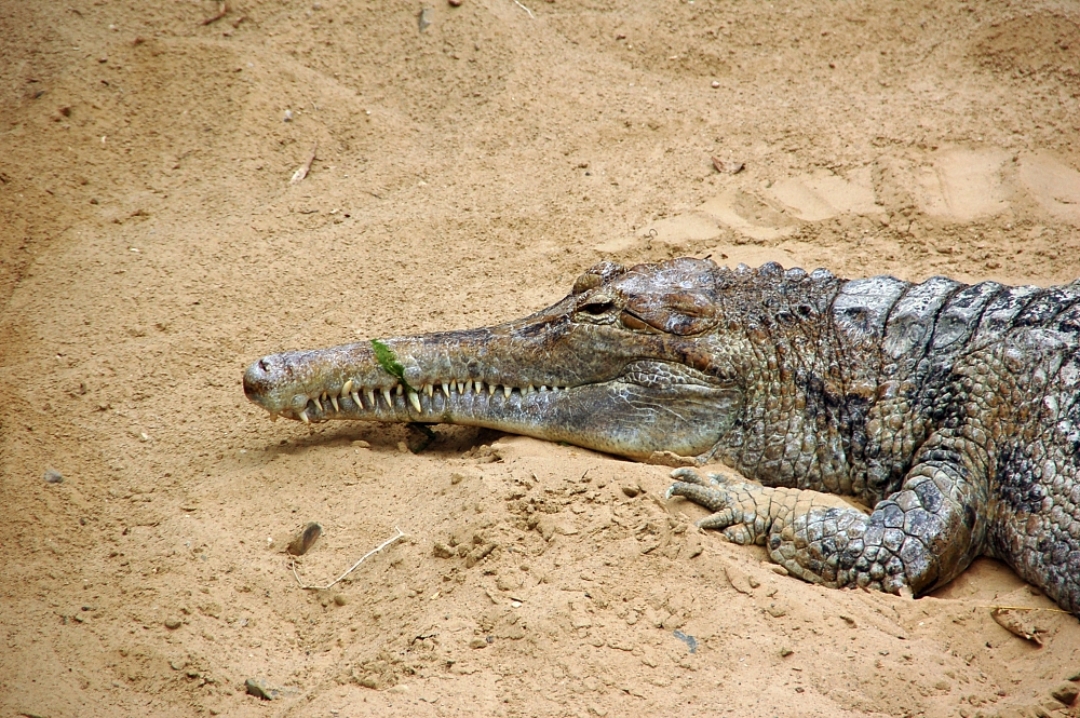 DNA sequencing has found the Malaysian gharial to be a descendent of the Crocodylidia order. – Photo by Fritz Geller-Grimm/Wikimedia Commons

“OF all the reptiles in Borneo, by far the most important, when it is considered in relation to man, is the Crocodile” (Robert WC Shelford – ‘A Naturalist in Borneo’, published 1916). Shelford, a former director of Sarawak Museum in late Victorian times, continued, “… the crocodile exacts a considerable annual toll from the native population”, and I add, it still continues to do so 105 years later.

There are 17 distinct species of the Crocodilia order worldwide, causing approximately 1,000 deaths per annum globally. I shall cover the general features of crocodiles and then pinpoint the five types found in Malaysia by providing a thumbnail sketch of each.

The word ‘crocodile’ is derived from the ancient Greek ‘krokodilos’ meaning lizard and was first used in 16th century English. Unlike other reptiles, they are closely related to birds and dinosaurs with four chambered hearts and have been in existence for at least 46 million years. They have lived, in zoos, for up to 100 years plus but their normal lifespan is between 35 and 75 years. All species are semi-aquatic preferring rivers, lakes, wetlands, or brackish and saltwater habitats, and are carnivorous with high levels of aggression.

With a streamlined bodily shape and webbed feet, they are agile swimmers, closing their nostrils when submerged and can block out the entry of water into their system by the use of a ‘palatal’ flap at the back of their mouths. They have smooth under bellies and sides and heavily armoured scaly skin on their uppermost parts. Part of their success, as predators, lies in their sensors with eyes, ears, and nostrils on the top of their heads to remain semi-submerged. They are mostly night hunters with specially evolved vertical slit eyes with a third eyelid, in the form of a membrane, which they draw across their eyes when submerged.

Their diet consists mostly of fish, amphibians, crustaceans, molluscs, birds, reptiles, and mammals. Saltwater crocodiles feed on buffalo, deer, monkeys, wild boar, and even sharks! With the most acidic of stomachs of any vertebrate, bones, hooves, and horns can easily be digested. Some species swallow stones or small pebbles from river beaches, which help them grind down the food that they have ingested.

They have the strongest bite of any animal and feed by grabbing and holding onto their prey with very sharp, needle-like teeth used for piercing the flesh and their powerful jaws hold their prey very firmly. When on land, they can move relatively quickly over short distances reaching speeds of up 10 to 11kph on their ‘belly runs’, moving in a sinusoidal fashion whilst whipping their tails to and fro to gather speed.

The incubation period of the eggs is between 65 and 95 days and at the time of hatching the young ‘chirp’ within their eggs, using an egg tooth at the top of their snouts to break out of their shells. The mother crocodile then carries them gently in her mouth to the nearest water and feeds them. Young crocodiles have a very high mortality rate owing to predators, yet the mother cares for them for over a year up to the next breeding season.

Crocodylus porosus is the most aggressive of all species with a big head and broad snout. Pale yellow with black stripes when young, they develop a dark greenish colouring in adulthood. Living in brackish and marine environments and lower stretches of rivers, they are apex predators and feed on any animal that they can fasten their great jaws onto in both Peninsular and East Malaysia. 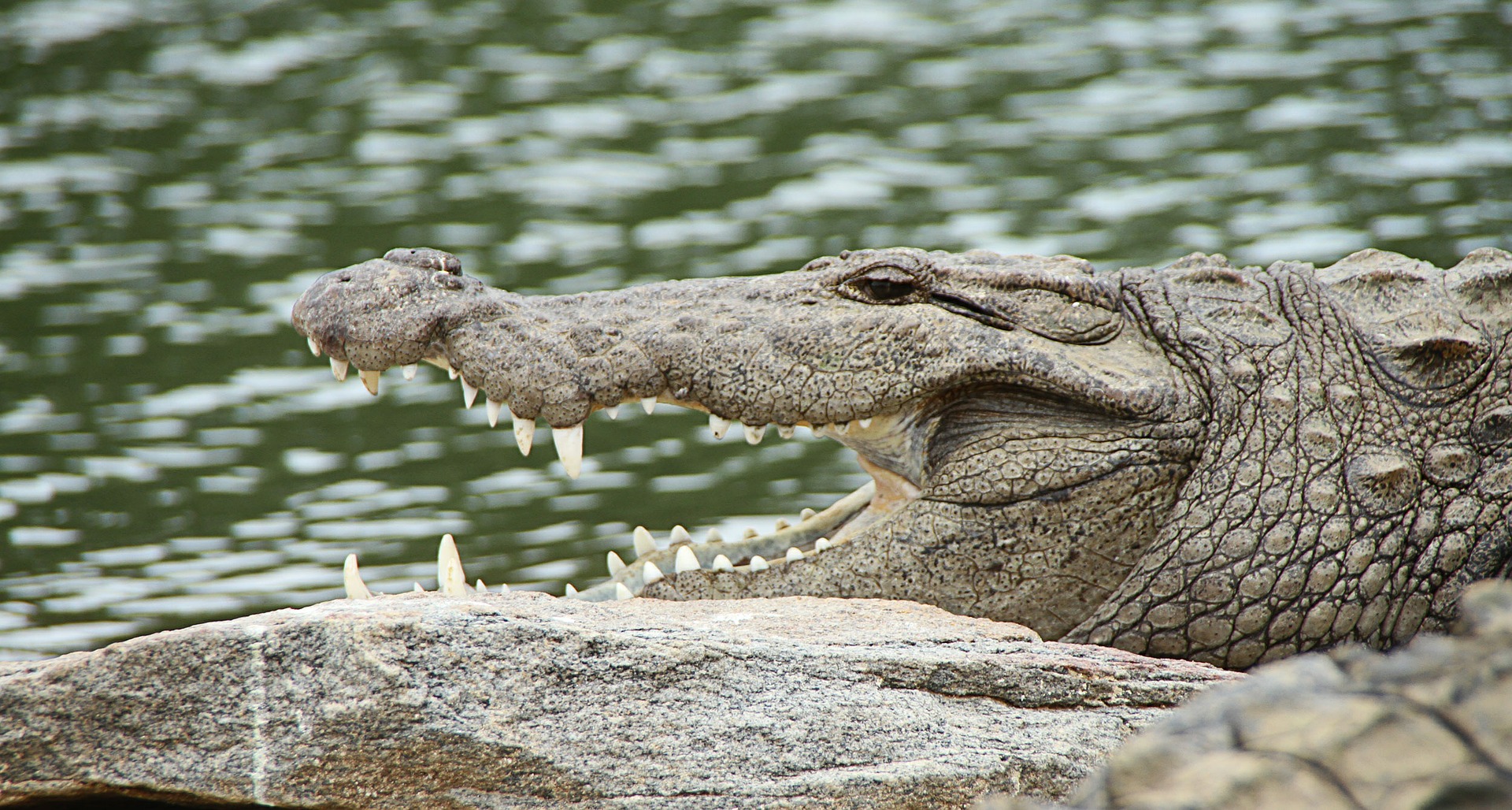 Crocodylus porosus is the most aggressive of all species with a big head and broad snout. — Photo by Rajeesh TK/Pixabay

Crocodylus ranius is exclusive to Borneo, hence its name. It is a freshwater species found in riverine pools and sometimes it is confused with the saltwater crocodile although it is slightly smaller. I saw a couple of these years ago, disguised as drifting logs, whilst they were shadowing the small boat that was taking me up the Kinabatangan River in eastern Sabah. Suffice it to say the outboard motor kicked into action and I made a hasty retreat!

Crocodylus palustis has a wide range across the Indian subcontinent and into Peninsular Malaysia. Of a modest size with a very broad snout, it appears more like an alligator. It is a heavily armoured species preferring slow moving rivers, swamps, and lakes. Again, I witnessed one in a coastal swamp of a marine park near Lahad Datu.

Crocodylus siamensis is a smaller species, living in freshwater habitats in Brunei, Sarawak, Sabah, and Kalimantan in Bornean Indonesia. With a relatively broad snout and olive green to dark green colouring, it feeds on a variety of small to mid-sized vertebrates. Its status is truly unknown as it is listed as Critically Endangered although it may be extinct.

Unlike a true gharial, Tomistoma schlegelii’s snout broadens towards its base. DNA sequencing has found it to be a descendent of the Crocodylidia order. Dark reddish-brown on its upper body with brown or black spots on its back and tail, its smooth snout holds long and needle-like teeth and its feet are also webbed. Males average 200kg in weight and females at 93kg with lengths respectively of five and four metres. Native to Peninsular Malaysia, Sarawak, and Kalimantan and Sumatra, they may be found in peatlands and lowland swamp forests.

Adults prey on proboscis monkeys, long-tailed macaques, deer, water fowl, and other reptiles. A female lays between 13 and 35 large eggs before she covers the nest and then abandons it, leaving the hatchlings to fend for themselves. This species is threatened by extinction owing to the drainage of freshwater swamplands and forest clearance as well as being hunted for its skin, meat, and eggs. Ever increasing reports are registered upon attacks on humans, mostly because of the decline of the gharials’ habitats as villages are being built.

Many species of crocodile adopt clever ways for trapping their prey. The ones I saw, on the Kinabatangan River, looked like dead logs floating down the river in twilight. Others, semi-bury themselves in mud banks looking like beached logs covered in mud. With a penchant for macaques, they remain immobile until a macaque approaches to catch crabs in brackish waters and with a whiplash of its huge tail the monkey is knocked flying into the river. The rest speaks for itself! Some even balance twigs on their snouts, awaiting nesting birds to fly down and to pick off!

Crossing the seas in search of food

Crocodile hunting was banned in the 1970s in both Queensland and the Northern Territories in Australia, thus increasing the estuarine/saltwater crocodile species to 30,000 and 50,000 respectively. During this five-decade period an increasing number of attacks on humans have been recorded.

Today, many of these crocodiles are paddling across the seas to East Timor, 560km from Northern Australia. The very success of the Australian crocodile recovery programme is taking its toll on human lives in East Timor where, now, the people are 10 times more likely to die in a crocodile’s jaws than from the bite of a malarial mosquito.

Whilst the preservation of crocodiles exists in Malaysia, when children’s lives are at risk when playing in rivers, I just wonder whether there is a growing need for controlled culls of the crocodile population. Wildlife conservationists will have objections to such but we can be grateful to Sarawak Forestry and the Fire and Rescue Department for their crocodile capturing and relocation techniques. Crocodiles, alas, wherever they are relocated, do have an inbuilt homing instinct.

Previous ArticleWoman in nursing home dies of Covid, not vaccine – Health DG
Next Article You’re not ‘fully vaccinated’. You never will be. And that’s OK.