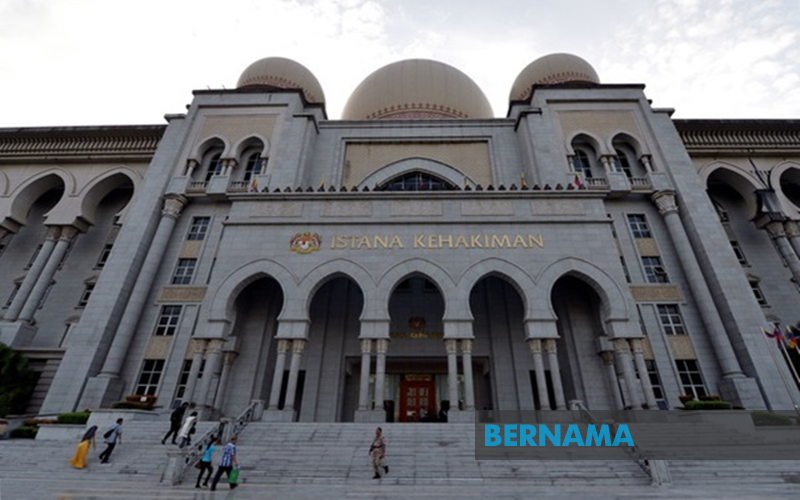 File photo of the Palace of Justice in Putrajaya – Bernama photo

KUALA LUMPUR (Oct 27):  A three-judge panel at the Court of Appeal today decided that the High Court was correct to rule in favour of a Buddhist father by quashing his two children’s unilateral conversion to Islam by the Buddhist-turned-Muslim mother.

Court of Appeal judge Datuk Mohamad Zabidin Mohd Diah, who chaired the panel, delivered the unanimous decision after hearing the case this morning.

“We have come to our decision. Our decision is unanimous, and we are of the view that the High Court judge as well as we — the appeal court — are bound by the Federal Court’s decision in Indira Gandhi.

“And in this case we think the proper order is no order as to costs,” he said in delivering the panel’s brief decision.

The two other judges on the Court of Appeal panel today were Datuk S. Nantha Balan and Datuk Nordin Hassan.

Both the mother and the Federal Territories Registrar of Muslim Converts were appealing against the Buddhist ex-husband’s successful bid at the High Court in 2018 to quash their two young children’s unilateral conversion to Islam.

High Court judge Datuk Azizah Nawawi had in her October 16, 2018 decision said it was not disputed that the two children were converted without the consent of both parents and with the children’s certificates of conversion to Islam issued without the father’s consent, further noting that the court is then bound by the Federal Court’s January 29,  2018 decision in Ipoh mother M. Indira Gandhi’s case.

The High Court had also in the same October 2018 decision granted two orders sought by the non-Muslim father.

The first court order granted by the High Court then was to quash the conversion of religion of the two children and to quash the decision of the Federal Territories Islamic Religious Department (Jawi) director-general and the Federal Territories Registrar of Muslim Converts to issue the “Kad Akuan Agama Islam” or certificates of conversion to the two children.

With the Court of Appeal’s decision today, the High Court decision still stands.

The High Court had on May 21, 2018 ordered for the names and images of the mother who had converted from Buddhism to Islam, and the Buddhist father, as well as their two children to not be published.

The Court of Appeal today reminded reporters of the court order for all four names to not be published.

The couple, initially both Buddhists, had married in a civil marriage in 2006 and were living in Selangor with their two children.

The wife converted to Islam on December 29, 2015 while the couple was going through a divorce initiated jointly on December 17, 2015. As part of the initial divorce process, both parents had agreed that the children would not be influenced into embracing any new religion until they became adults and there was a March 2016 interim court order to prevent the children from being converted.

On May 11, 2016, the mother was said to have secretly converted the two children — aged eight and three — to Islam in Kuala Lumpur without informing the father and without the father’s consent, which then resulted in the current court case.

On June 14, 2016, the father had filed his court challenge over the children’s unilateral conversion, by filing a judicial review application against five respondents, namely the Federal Territories Islamic Religious Department (Jawi) director-general, the Federal Territories Registrar of Muslim Converts, the education ministry director-general, the government of Malaysia and the mother.

Separately, the father had on May 11, 2016 filed a fresh application for divorce under the required legal provision.

In January 2020, the Federal Court rejected the mother’s application for leave to appeal the granting of custody to the father. This means that the two children — now aged 13 and nine — will remain with the father.

In the online hearing today before the Court of Appeal, the Muslim convert mother’s lawyer Arham Rahimy Hariri argued that the High Court is not strictly bound by the doctrine of judicial precedent when it comes to interpreting the Federal Constitution, further arguing that this means the High Court does not have to follow the precedent set by the Federal Court in Indira’s case.

Among other things, Arham Rahimy also argued that the Federal Court in Indira’s case had allegedly wrongly interpreted the word “parent” in the Federal Constitution’s Article 12(4) by saying that it means both parents. Article 12(4) states that the religion of a person under the age of 18 shall be decided by his parent or guardian, which would be for the purposes of receiving religious instruction in or taking part in religious ceremonies or acts of worship.

Lawyer Nizam Bashir, representing the Federal Territories Registrar of Muslim Converts, argued that the Federal Court’s decision in Indira’s case should not apply to this case, saying that the focus should not be on the parents’ dispute of whether the children should be Muslim or not.

Nizam argued that the focus should be on what the children wants, claiming that the Federal Territories Registrar of Muslim Converts and the family court in Shah Alam had come to the conclusion that both children desired to be Muslim after interviewing them.

When it was pointed out by a judge today that the two children are not adults, Nizam said Article 11 of the Federal Constitution does not say whether freedom of religion is only for adults and argued that a child is free to choose any religion they want.

As for the Federal Court ruling in Indira’s case that children are not to be unilaterally converted without the consent of both parents, Nizam argued that the laws for Kuala Lumpur allows conversion to Islam of children there with the consent of a parent.

Among other things, Nizam also argued that the father in this case had not fulfilled the conditions to be granted leave for judicial review, due to reasons such as the father allegedly not having exhausted alternative legal remedies.

The father’s lawyer K. Shanmuga however argued that the case today is a public law challenge that revolves around whether the issuance of the certificates of conversion to Islam for the two children were lawful or if they were tainted by illegality and procedural impropriety.

Shanmuga said the High Court was correct to say that it was bound by the Federal Court’s decision in Indira’s case, further pointing out that the Federal Court had in its unanimous decision already considered all the same arguments — including the Article 12(4) and Article 11 points — that were raised today by the lawyers for the mother and the Federal Territories Registrar of Muslim Converts.

“Everything was considered by the Federal Court, they came to the conclusion, when you read the Federal Constitution purposively, you read everything together, the parents decide on the religion of the child until they are 18, and it’s both parents — one parent cannot override the decision of the other parent. That was the finding on the law and Constitution by the apex court,” he told the courts.

Responding to Arham Rahimy’s arguments, Shanmuga said there is nothing so fundamentally wrong in the Federal Court’s unanimous decision in Indira’s case that would entitle a lower court — such as the High Court and Court of Appeal — to depart from the decision.

“The stand of the AG is, we stand guided by the decision in Indira Gandhi and the conversion must be agreed by both parents,” he said.

Nik Isfahanie was representing all the three other respondents who had not appealed against the High Court’s decision but are parties to today’s Court of Appeal case — namely Jawi director-general, the education ministry director-general, and the government of Malaysia.

After hearing the arguments and views by all parties, the Court of Appeal panel had then today delivered the decision in favour of the father.

Also present in the online hearing today was the father and the father’s other lawyers Honey Tan Lay Ean, Tay Kit Hoo and Kee Hui Yee.