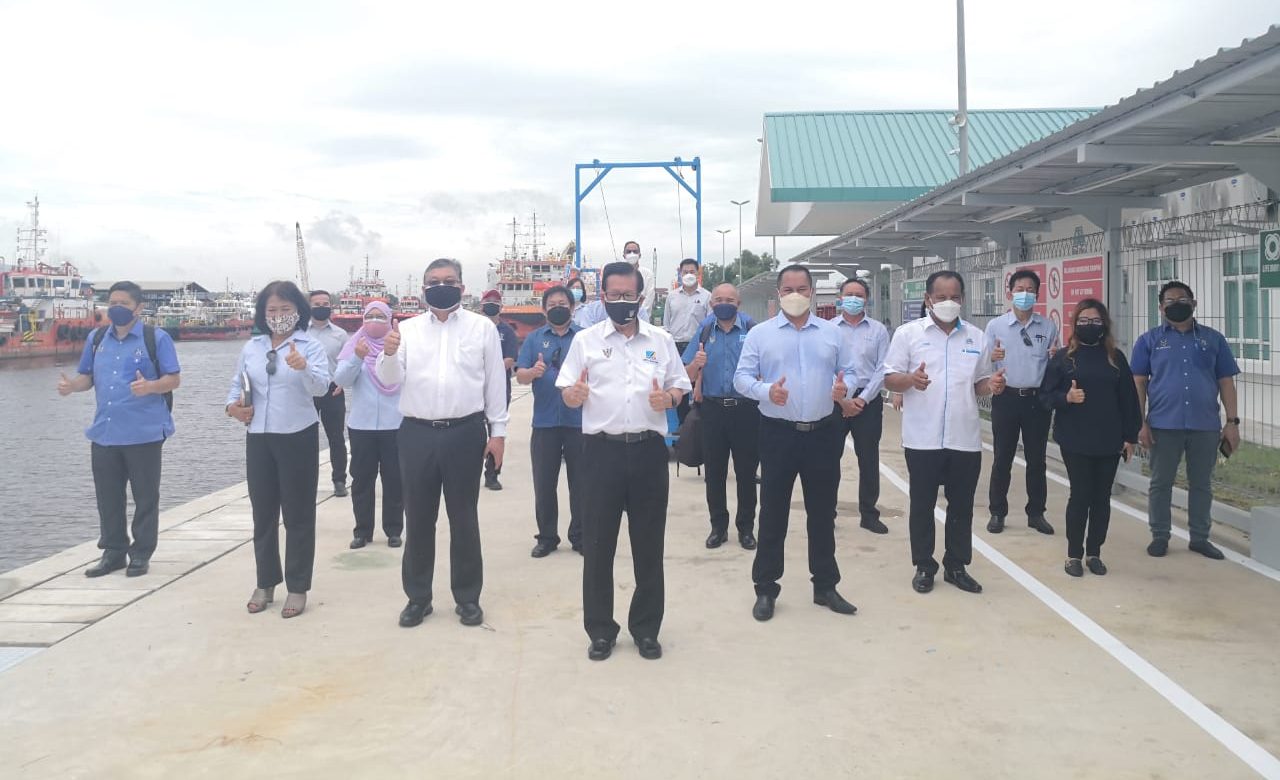 Lee (fourth left) with others during his visit to the crew change terminal at Pulau Melayu yesterday.

MIRI (Oct 27): The oil and gas (O&G) industry is required to utilise the crew change terminal at Pulau Melayu here which is now in operation in view of the rapid growth of the industry, said Minister of Transport Dato Sri Lee Kim Shin.

Lee said the rapid growth in the oil and gas industry has resulted in the increase in the number of offshore crew boats and other type of offshore support vessels.

“With the completion and operation of the crew change terminal at Pulau Melayu, Miri, the oil and gas industry is required to utilise it and the Ministry of Transport, Sarawak through the Sarawak Rivers Board (SRB) will undertake the necessary enforcement as provided under the Sarawak Rivers Ordinance 1993,” he said in a press statement following his working visit to the crew change terminal at Pulau Melayu yesterday.

Lee said over the past 15 years, the number as well as size of these offshore vessels have increased.

“The construction of this 200-metres long crew change terminal by Miri Port Authority which started in September 2019 as one of the components to improve the berthing of these offshore support vessels is timely and a very welcoming effort in supporting and ensuring the orderly operation of the offshore crew boats in and out of Sungai Miri.

“Presently, there are about 186 boats licensed with Marine Department of Malaysia, Sarawak Region servicing the oil and gas industries of which the bulk of them operates from Bintulu and Miri,” he disclosed.

Lee, who is also Senadin assemblyman said the Sarawak government’s strong support for the growth of the oil and gas industry in the state and the recent announcement of the relocation of Shell Malaysia headquarters to Miri will certainly see the increase and vibrancy in maritime and riverine activities especially in Sungai Miri.

“All these will augur well with the state’s economic growth especially during this challenging time under Covid-19 pandemic.

“Our ministry is also in the process of looking into ways to safe guard the navigation safety and efficiency of vessels in Sungai Miri.

“Among others, the ministry through SRB is looking into establishing a laid-up anchorage area in Kuala Baram for non-operational vessels, setting up of additional Aids to Navigation (AtONS) as well as Vessel Traffic Management System (VTMS) in time to come,” he said.

He added that all these efforts through the improvement of the transport sector as key enabler to the state’s economy are taken to boost the confidence of investors to expand their existing investment and to attract more new investments into Miri.