Saturday, December 4
You are at:Home»Columns»Just another point of view»Dennis Lau’s ‘Classic Images of Borneo’ — A book review 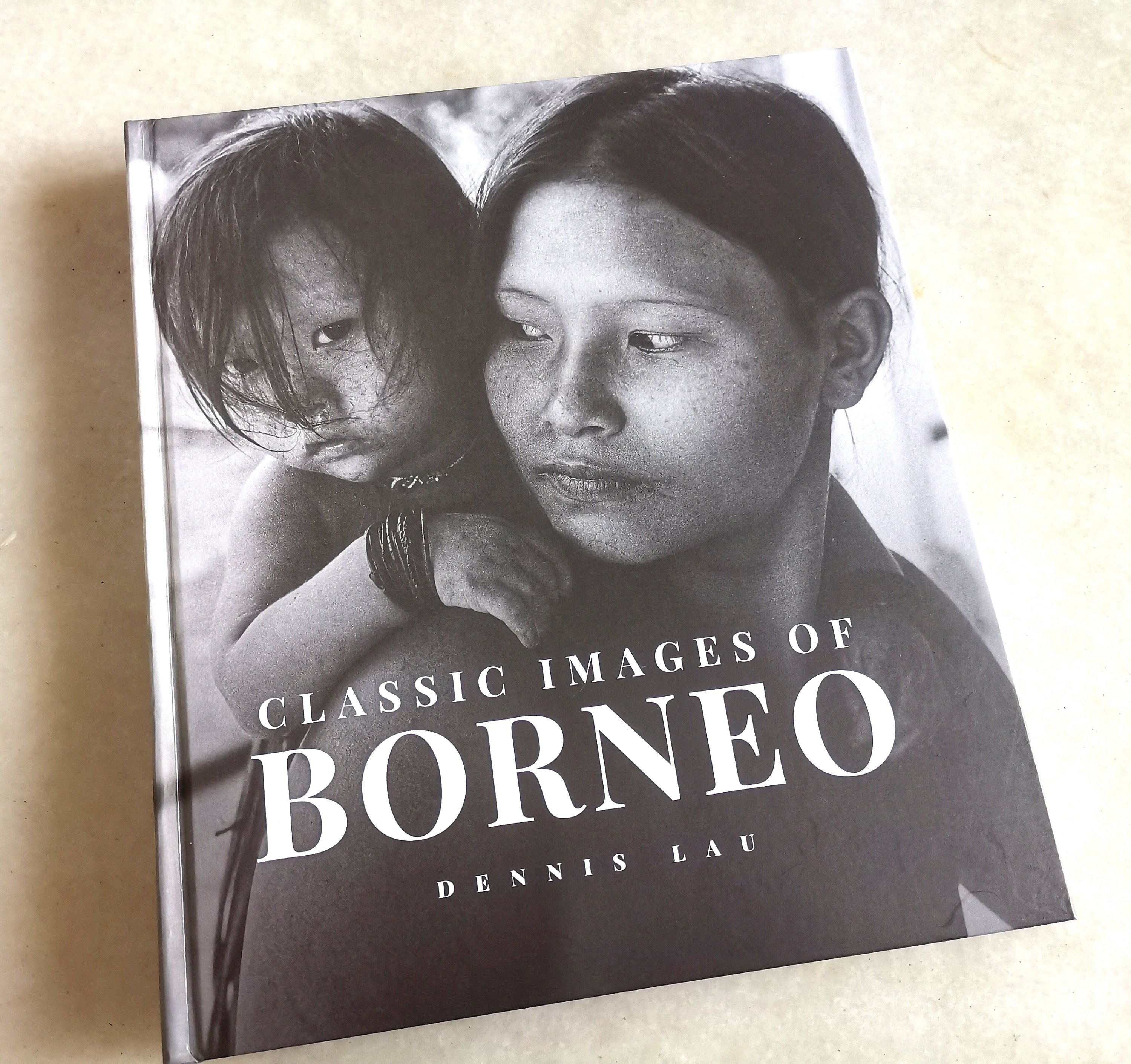 The cover of the newly-launched ‘Classic Images of Borneo’.

AFTER more than two years in the works, publisher Ang Tse Chwan’s Illustrato Studio PLT has just launched Dennis Lau’s ‘Classic Images of Borneo’ – an impressive table-top book of 170 amazing photographs taken by the famed and world-renowned Sarawak photographer over a period of more than half a century.

Lau, 83 this year, hailed from Bintulu, and at age 20, had won his first award at a Borneo photo competition.

In 1962 at age 24, as a member of the Sarawak Photographic Society, his works were featured at the Seventh FIAP Biennial Exhibition in Athens, Greece – they won the Asia Cup that year. Two years later, he was made an associate of the Royal Photographic Society in England, and in 1970, held his first solo exhibition at the British Council in Kuching.

From 1977 onwards, Lau’s photos started appearing on a regular basis in the Borneo Bulletin and the Sarawak Gazette; by 1985, he had a weekly photo column in the bulletin called ‘Dennis Lau’s Borneo’, which ran for almost three decades!

In 1987, Lau published his first book called ‘Penans – The Vanishing Nomads of Borneo’ and in conjunction with it, a solo exhibition was held at the Gymkhana Club in Miri to launch the book. That same year, he also contributed to the book ‘Natives of Sarawak’.

In 1999, he produced a book called ‘Borneo – A Photographic Journey’ for Travelcom Asia.

All three publications are now out of print.

In 1988, Lau became the founder of Sarawak Photo-Art Society and remains their honorary president to this present day; in 1996, he was elected president of Sarawak Photographic Society in Kuching, which he served over the next 16 years!

Lau has a long list of accolades and awards, and has held many solo exhibitions and been part of much-acclaimed published photographs in numerous world-renowned books, magazines and periodicals.

More than two years ago, Lau was approached by then-Universiti Malaysia Sarawak (Unimas) lecturer Ang on the possibility of having his photographs published in a dedicated table-top book. Ang, a 34-year-old lecturer of design and animation, was introduced to Lau by a former colleague at the university, and the project became his brainchild for the challenging two years under the shadow of the coronavirus pandemic.

Ang, whose hometown is in Kuantan, had lived and worked in Penang and Kuala Lumpur and had initially taken part in a non-governmental organisation (NGO) project that had taken him into the remote areas of Sarawak. There, he had seen for himself the great disparity between the developed states in Peninsular Malaysia and Sarawak, and was touched by the plight and daily hardship faced by the people in the rural areas that he had been to.

He was looking for some project where he could focus on and highlight this wide gap in economic development that he had seen.

Talking with Ang, a soft-spoken, smart-looking and extremely polite professional, he had faced many trials and hurdles to get the book project going; amongst which was the lack of highly-professional equipment to convert Lau’s precious negatives into usable images suitable for publication. The selection process too was a lengthy and tiring one as Lau had thousands and thousands of photographs to glean through – of which they had to finally decide on the best 170 to be shared with the world!

Ang was not overly confident too whether such a publication would be a success and if the book could actually turn a profit – especially for the artist himself, Lau, whose photographic essays were priceless individual works of art!

What if the book did not sell in the volume that they had expected?

As one of the early birds who had jumped at the chance to grab a copy when Ang had first announced the book’s publication on Facebook over a year ago, I had prepaid for my copy then; true to his promise, Ang had hand-delivered one of the very first copies hot from the printers to me last Tuesday! 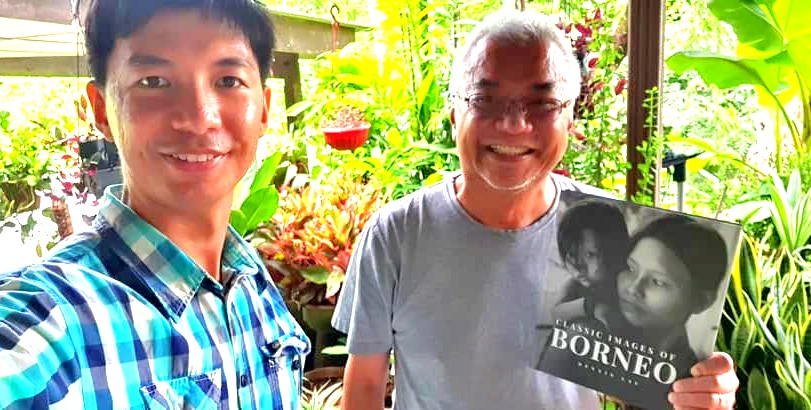 Ang and the columnist (right) with the book.

He has a limited run for the first edition of the book!

As an objective reviewer, I must say that I am blown away by the book and the 170 black and white photographs inside it. The entire layout of the book is easy on the eye – it is easy to flip and read; the photographs are well presented; and the captions are interesting and informative.

I must say that both Lau and Ang have done a superb job of collating all the photos together; ensuring a story-like telling of the adventures, the times, the experiences and the wonderful images shown to us, the reader.

The quality of the publication, too, is very good. It makes a worthy gift to any book lover!

It does not matter if you are not into photography per se as a hobby yourself – the images that leap forth from the pages as you turn one after another would first catch your attention and then, astound you with its impact.

The captions are all there in full detail – the title of the shot, the place and the time and the date it was taken. There are brief descriptions that are sufficient and self-explanatory.

I shall quote one such caption herewith, which happens to also be also one of my favourite photos in the entire album:

“This is the communal veranda (‘ruai’) where most of the daily activities, important functions or even just resting are carried out under the same roof. In this remote longhouse, an Iban lady splits rattan to weave the basket as the morning sunlight shines through the doorways on the ‘ruai’.”

The foreword to the book was written by Heidi Munan, a long-standing personal friend of mine who is most well-versed with the arts, crafts and history of Sarawak as well as being a prolific writer and author of many books herself, and a curator of Sarawak Museum (for Sarawak native beads); and I quote from it:

“Each of the photos in this book has been shot, processed and selected by a master of the art. “Each captures a moment in the life of Malaysian Borneo, the natural environment, the people. Each is unique.

In his ‘Artistic Statement’ in the beginning of the book, Lau himself wrote, and I quote:

“I am passionate about telling stories and finding a message behind my pictures. Good pictures express strong statements. Thus, it is vital to find a good topic, research it, and then shoot it. An evocative image strongly impacts the viewers, staying in their minds for a long time.”

In that sense and in that statement, Lau’s pictures have made their strong impact upon me, a viewer, an admirer and a reader – as with his pictures, he tells us the story of the image and the moment that it had captured. Such moments are forever ingrained onto his negative and then, have magically transferred themselves forever to our brain through the media of still-photograph!

Such wondrous works of photographic excellence – such mastery of skills and such unforgettable images. A truly great book to be sure.

You can indulge yourself by owning a copy of Lau’s ‘Classic Images of Borneo’ by contacting Ang via 010-983 7357, or email him at [email protected]

Limited copies are available at RM180 each – a special-launch price, while stocks last.

Previous ArticleBudget 2022 highlights: Here’s what Malaysians can expect to get as Covid-19 recovery continues
Next Article Ibraco launches new apartment Renna Residence at The NorthBank this weekend