Saturday, December 4
You are at:Home»Columns»Nature Matters»The pitcher plants of the rainforest 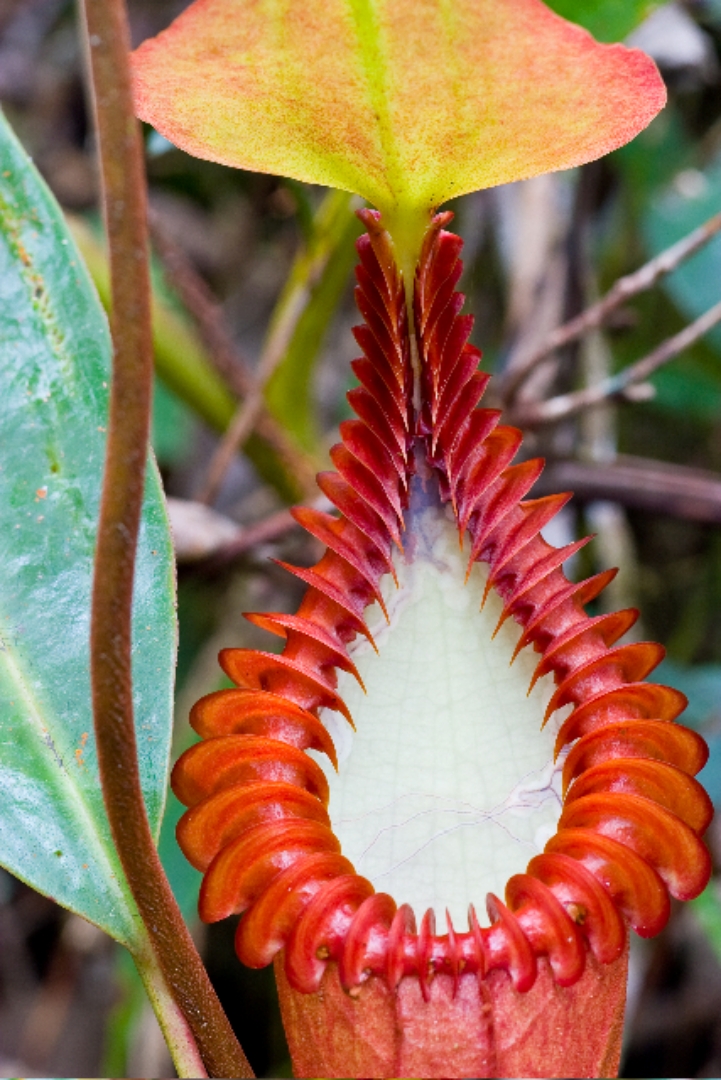 Nepenthes edwardsiana’s distinctive feature is the white lining of its pot. – Photo by Alastair Robinson/Wikipedia

IN 1930, Dr Eric Mjoberg’s book, ‘Forest Life and Adventures in the Malay Archipelago’, was published in English. Mjoberg was a Swedish naturalist who spent eight years exploring the interior of Borneo and devoted a chapter to ‘The Curious Pitcher Plants’. He described these plants as “… with exceedingly complicated contrivances designed for the preparation of food for the plants”.

When I returned to the UK from a school expedition to Sabah in 2000, where we climbed Mount Kinabalu, I was greeted by my late wife with a pitcher plant which she had bought from a local garden centre. I proudly hung my pitcher plant above our bath, where it would receive daily doses of warm moist air. It thrived. Later that summer, I hung it, in its basket in my garden shed and daily watered it. Sadly it shrivelled and died! A temperate climate is no place for such truly tropical wonders.

Its genus ‘Nepenthes’ is derived the Greek, meaning ‘capable of relieving suffering’. Borneo currently holds 36 species out of a global total of at least 100. The Bornean species are identified in the second edition of ‘Pitcher Plants of Borneo’ by Anthea Phillips, Anthony Lamb, and Ch’ien Lee. No doubt since the date of publication 13 years ago, other pitcher plants have been discovered.

Essentially, they are found in nutrient deficient soils and thus have adapted a particular means for acquiring essential nutrients. Commonly found in montane and heath forests, they are also located in lowland rainforest, now colonised by heathland in such places as the kerangas covered sandstone plateau of Bako National Park. There, five species have been identified – Nepenthes ampullaria forming rosettes on the ground with small bulbous pitchers; Nepenthes gracilis – which is a small climber with slender pale green pitchers and two fringes of long hairs; Nepenthes mirabilis – which is similar to Nepenthes gracilis but without hairs; Nepenthes albomarginata – a larger purple striped pitcher; and finally Nepenthes rafflesiana – a much broader pitcher with two fang-like appendages at the base of its lip. On these bare sandstone thin soils these plants make a truly picturesque sight.

The pitchers are found hanging at the end of tendrils extending from the midribs of leaves. Low down, within the pitcher, is an area supplied with digestive glands and above this a belt with smooth, waxy surfaces. At the very top of the pitcher is a rim (called a peristome) of downward growing hairs, which secrete a nectar like substance which is sweet in taste. The lid of the ‘pot’ closes to provide the secretion of digestive juices and opens to attract insects.

Such ‘pitfall traps’ entice insects such as flies and ants by their nectar like secretions only for the unwitting insects to fall into the belly of the pot and drown in a stinking soup which dissolves them in a weak acidic solution containing a peptic enzyme. The plant digests the nitrogenous and phosphatic contents of the insects, thereby feeding itself with essential nutrients that the soils lack.

In his examination of the contents of 200 pitcher plants on Mount Poi in southern Sarawak, Mjoberg found the remains of ants, butterflies, and dragonflies together with even lizards and scorpions. He noted that the pitchers “… vary from the size of a thimble to a full 30 centimetres in length”.

Pitcher plants are well documented by EJH Corner (who spent his prisoner of war time in Japanese occupied Singapore as the Herbarium Keeper there, before returning to the UK as Cambridge University professor) with a chapter on ‘Plant Life’ in ‘Kinabalu-Summit of Borneo’, published as a Sabah Society Monograph in 1978. Hazebroek, Adlin, and Sinum graphically described these plants in ‘Maliau Basin – Sabah’s Lost World’ in 2004, published by Natural History Publications (Borneo).

Nepenthes lowii, named after Hugh Low, bears large pitchers of an oblique-oval shape with a very wide opening. It is renowned for its attraction of mountain tree shrews (Tupaia montana) which feed on the nectar and snail eggs laid in the hairs under the lid. Perched on the rim of the pot, the shrews defecate into it, thus providing nitrates and other nutrients for plant growth. 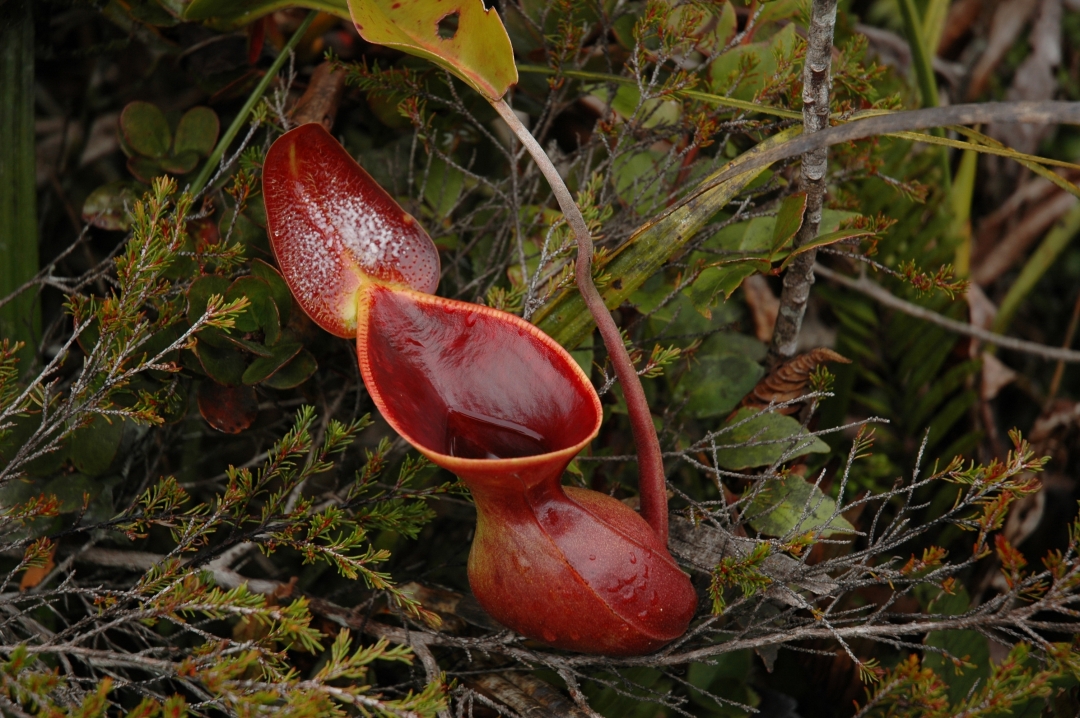 Nepenthes lowii is renowned for its attraction of mountain tree shrews. – Photo by Jeremiah Harris/Wikipedia

The rim of this plant is not slippery and its very shape and the location of the nectar and snail eggs allow the animals’ hindquarters to extend over the pot as they feed! The tree shrews use the old, dead pitchers as gongs as they scamper over them; the sounds echo and signal a healthy feast of fresh nectar and snails.

Nepenthes edwardsiana is named after George Edwardes – a former Governor of the Crown Colony of Labuan. It is found in dense mossy forest in constantly moist conditions occasioned by the clouds enveloping the mountain slopes. Ranging in colour from light yellow to brick red, its distinctive feature is the white lining of the pot, which contrasts with the outer surface.

These pitchers are some of the largest in the genus, up to 50cm long and 15cm wide with a circular shaped lid. Its rim with a brilliant red colouring is composed of rib-like structures, each rib hanging talon like into the pot. Essentially, it is a climbing plant with 15-metre stems, but can grow on the sides of tree trunks as an epiphyte.

The El Nino episode of 1997 with forest fires in Kinabalu Park sadly saw the destruction of many of this species.

Near the highest levels of Mount Kinabalu, Nepenthes villosa may be found as an epiphytic plant. It is characterised by its corrugated funnel shaped pot and its olive-yellow colouring.

By far the most resplendent pitcher plant, in my humble opinion, is that of Nephentes rajah, named after Sir James Brooke. It has very large red pitchers up to 46cm long, holding up to 3.5 litres of liquid and a long, arched lid. Its rim has long spear-like protuberances whilst the inside of the pot is lined with a fleece-like material. Nepenthes rajah can hold up to 3.5 litres of liquid. – Photo by Alastair Robinson/Wikipedia

These thumbnail sketches are but snapshots of a small selection of species that abound in Borneo. There is much scientific investigation yet to be accomplished on these fascinating and distinctive wonders of nature.

EJH Corner summed up the work to be done most eloquently, “… how long do the plants live, how quickly do they grow, how do the pitchers on the basal leaves differ from those on the climbing leaves, how are flowers pollinated and the seasons of flowering, and what factors determine the survival of seedlings?” Such challenges still await research by both eager amateur and professional botanists.

The Friends of Sarawak Museum has launched a superb online exhibition entitled ‘Plant People – Unearthing Botany in Sarawak’. It was reported in thesundaypost (Oct 10, 2021) and truly well worth a visit. Go to https://friendsofsarawakmuseum.org/beccari/exhibition/.

Previous ArticleCommitted to uplifting community identity, participation
Next Article Hold on to the little lights