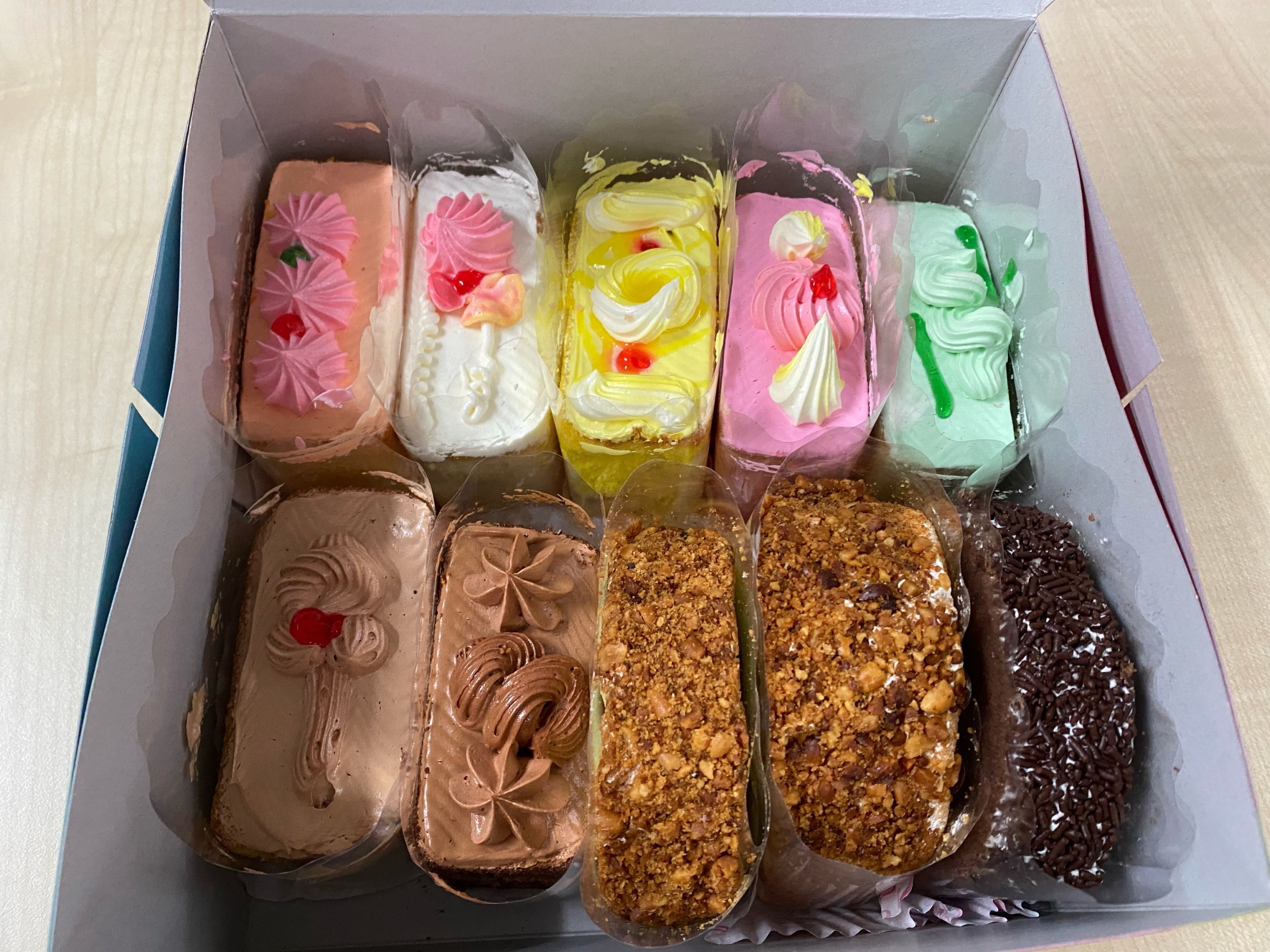 Those who were born before 1990s would have tasted the authentic old-school buttercream cakes decorated with various flower patterns and childhood favourite cartoons during special day or birthday celebrations.

Back then, the cakes were a hit when they were mostly made with a light sponge, and decorated with a lot of colourful creams.

Every visit to the cake shop was never disappointing. Flipping through a photo album while choosing a cake design in your favourite cartoon characters with buttercream, was a joyful and memorable experience.

The era of those cherished moments is long gone, but a 60-year old bakery in Pudu has been drawing a steady stream of regular customers who prefer the original taste of its old-school buttercream cakes.

Located in the centre of Jalan Sungai Besi, Chen Tiang Cake House has been the spot for more than 30 types of vintage cakes and pastries since its establishment in 1961, with its exterior of old-fashioned wordings against a yellow signboard and an even older original signboard above it.

The cake house, which is operated by the second and third generations of the Han family, has gotten much praise from netizens with its old school buttercream cakes, a nostalgic treat for many city folks.

According to the third generation of the family, Lois Lim, 21, Chen Tiang Cake House was founded by her grandfather Han Yooi Kang with just a small kiosk in a ‘Kopitiam’ before expanding to the current shop which is located just next to it a few years later.

“Then my grandmother, Wang Ying, 76, joined 10 years after she got married to him at the age of 25. Ever since then, she has been working here till now.

“Everyone who is part of Chen Tiang Cake House today has been with us since the very beginning. The person behind who made each item that is presented on the shelf, the recipe that had been passed down from the founder, and even the machines and equipment have remained the same since 60 years ago.

“I would say our secret to sustaining our business till today is loyalty (staff and customers),” she told Bernama recently.

According to Lim, its loyal customers are mainly Chinese or Malay elderly citizens from Pudu, who know that all ingredients used in the bakery are halal-certified.

However, there has been a recent surge in demand for its cakes from young entrepreneurs, who have switched to the hybrid business approach, which is a combination of online and offline experience.

Cut into rectangles, most cakes at Chen Tiang Cake House are immaculately designed with delectable buttercream toppings and have 1990s’ favourite flavours such as chocolate, vanilla, and strawberry.

In the 1960s, each slice of the buttercream cake was sold for 20 sen, and over the years, the price has only risen to RM3, said to be the lowest in the Klang Valley.

“Apart from cakes, we have several other baked fresh daily goods too such as cream puffs, Portuguese egg tarts, and soft tuna buns from RM2.50 each.

“We are totally pork-free and all ingredients are sourced from halal-certified suppliers to bake and make each of the bread and pastries,” said Lim.

Their old-school storefront is difficult to miss with an open display of their baked delights, starring display cabinets of bread, cakes, doughnuts, and even puffs.

The one thing you can’t take your eyes off here are definitely the vintage-looking cakes in their fridge with various designs that have not changed over the years, decked out in colourful fabulous-looking buttercream.

“Besides traditional sponge cakes and later cakes, we also make vegetarian egg-less cakes for those who wish to consume eggless cakes.

“It is not easy to last up to 60 years (taking into account various crises including Covid-19 but with the support of loyal customers, we are very proud to still maintain the old-school features and vintage feel even though now not many old cake shops like this are still surviving.

“Although there are varieties of modern cakes available and became a trend either for parties or any celebrations, or to feed their social media, we still received positive feedback for our signature vintage cakes as it is hard to get it in any cake shops nowadays,” Lim said, adding that the cake shop operates daily from 8am to 5pm.

For Ahmad Fateh Abdullah, 23, a loyal customer of Chen Tiang Cake House over the past seven years, visiting the bakery has been an immersive experience for him.

“I used to buy their bread at school for breakfast or tea time. When there are any occasions at school or birthday celebrations, we will prefer Chen Tiang Cake House Bakeries because the cakes are not too sweet, and the buttercream and sponge are just nice and airy.

“Bakeries are such happy places in my book. Not only do they dole out sweet treats but it’s also a hub for good food.

“We know they are using halal ingredients to bake their cakes and pastries, so I won’t have to be ‘was-was’ (doubtful) when consuming their food,” he said.

Meanwhile, another vintage bakery, ‘Australian Bakery Since 1970’, took a different approach by having new menus to customers in addition to retaining its halal-certified vintage cakes, tarts, and creampuffs.

Popular among folks in Seapark, Petaling Jaya, near here, the bakery, which has been operating since 1970, still stands there till today, greeting customers, thanks to the hard work of Chan Kah Heng, 68.

According to Chan, the bakery has been one of the oldest remaining bakeries in town and still retains the nostalgic aroma of the bakery among customers who grew up in the 1970s, although the premises and kitchen have been refurbished with modern features.

“In the early days when I set up Australian Bakery with my father, I had just finished school. My father, who was a bread distributor around Kuala Lumpur, used his car and van for his business and owned a shop named ‘Rex Bakery’ at Old Klang Road, in the 60s.

“I frequently played truant from school to help my father run his bread business and it was during that time that we got to know several renowned bakers to learn from the best before deciding to open a cake and bread shop,” he said.

He said the buttercream cake is a best seller and popular among his customers who made special orders for birthdays and anniversary celebrations.

“It is encouraging to note that there has been a steady demand for our customised vintage cakes till today,” he added.

“However, as the market changes, we continue to evolve by studying market demand based on consumer preferences for cakes and pastries, as well as producing new menus and modern cake decorations without sidelining our signature menu.

“As such, we also produce modern cakes such as Red Velvet, Onde-Onde cake, Japanese sponge cake, durian cake and mini cake, which are decorated based on current consumer tastes,” he said.

According to Chan, ‘Australian Bakery since 1970′ has opened a second outlet in Jalan Telawi, Bangsar in May this year, which is currently being managed by his eldest son, Philip Chan. A total of 250 types of cakes and bread are being sold at both outlets.

Chan said it owed its success to regular customers who supported the bakery over two generations since its inception 50 years ago.

“All our bread and cakes are baked fresh daily. Unsold food within a day will be donated to the needy such as charitable homes.

“Among our recipes for success is that we use fresh ingredients. For example, one whole durian is used for our durian cake which is not mixed with any colouring or artificial flavours.

“Most of the cakes sold in the market are mixed with sweeteners and artificial flavours. Our cakes are made with real fruits.

Meanwhile, Philip said in the 1970s, each slice of the buttercream cake was sold at 20 sen.

“Today, despite the 40 per cent yearly increase in prices of ingredients such as flour, cooking oil and butter, we are still able to keep our prices as low as possible. The last time we reviewed our price was on Jan 1 this year. We only raised the price by 10 per cent,” he said, adding that its buttercream cake is now priced at RM3.50 per slice.

Philip is confident that there is still demand for vintage buttercream cakes given that these traditional cakes are not easily available at today’s modern bakeries.

While modern menus are popular among the younger generation, there are still people who prefer the vintage buttercream cakes, he said, noting that the taste, smell and texture of food can be extraordinarily evocative, bringing back childhood memories to many. — Bernama