Wednesday, December 1
You are at:Home»Lite Stories»Changing guard at Buckingham Palace: Camilla steps up 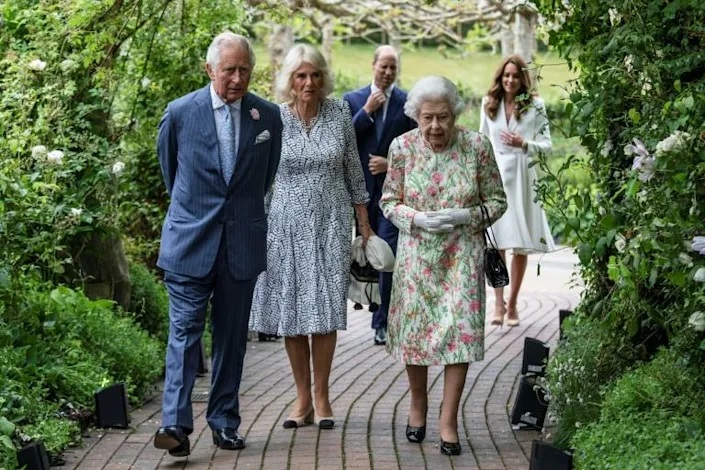 Charles, Camilla, William and Kate have accompanied the Queen at a number of public engagements, including meeting world leaders at the G7 summit in Cornwall in June. – AFP photo

A gradual changing of the guard is happening at the head of Britain’s royal family, as Queen Elizabeth II steps back from public engagements due to her advanced age and health.

The 95-year-old monarch’s eldest son and heir, Charles, Prince of Wales, has been shouldering more of the burden of official duties for several years, including overseas.

But his wife, Camilla, is increasingly stepping into the fray, both online during coronavirus pandemic restrictions in the past year and now in person, after curbs were lifted.

Joining the couple at the royal vanguard are Charles’ eldest son from his first marriage to Princess Diana, William, and his wife, Kate.

As a result, they have earned a greater share of the media coverage that would previously have gone to the monarch, who has been advised to rest by doctors.

Their presence at events — from the world premiere of the latest James Bond film to meeting world leaders at the G7 and UN climate summits — is a clear sign of change to come.

Joe Little, managing editor of Majesty Magazine, told AFP their visibility “will accelerate within the fullness of time”.

“But a lot of people are now familiar with Camilla and are getting to know her,” he added.

Camilla, 74, also known as the Duchess of Cornwall, will become consort when Charles, 72, takes the throne. William, 39, will move up the line of succession to heir apparent.

Only a few years ago, a different “Fab Four” were seen as the future of Britain’s most famous family: William and Kate along with his younger brother Harry and his wife Meghan.

But plans changed dramatically last year when Harry and Meghan moved to the United States, from where they have criticised the family and even accused it of racism.

The rise of Camilla — once a hate-figure for being “the other woman” in Charles and Diana’s marriage — has been remarkable.

“Her position has certainly evolved and there’s been a huge and very long process of rehabilitation since… she was described as this rottweiler at the time of Diana,” royal historian Anna Whitelock told the Daily Express.

Camilla, like other royals, was forced into a more public role by the coronavirus pandemic, when the world moved online.

But she has taken on the role with aplomb and won fans, even if in the eyes of some she can never be forgiven for her role in the collapse of Charles and Diana’s marriage.

“There are lots of Camilla supporters out there,” said Little.

“The sense is she’s coping with it very well. She’s been a member of the royal family for 16 years, so she’s had quite a bit of experience of high-profile things…

“She’s become very proficient at it.”

Since the death of the Queen’s husband of 73 years, Prince Philip, in April, Camilla has been seen — and heard — more frequently at official royal engagements and charity events.

This week she accompanied Charles — a longstanding environmentalist — to the UN COP26 summit in Glasgow, to urge world leaders to stop runaway climate change.

Last month she and Charles, who married in 2005, supported the Queen at the official opening of the Scottish Parliament in Edinburgh and the Welsh Assembly in Cardiff.

She was also present as the monarch undertook her first ceremonial engagement since her husband’s death — the State Opening of Parliament in May.

In the coming weeks, the couple embark on the first royal overseas tour since the start of the coronavirus pandemic, visiting Egypt, which will host COP27, and Jordan.

She gave a well-received speech and backing to a campaign tackling violence against women, dovetailing with support given by Kate to the issue earlier this year.

Camilla has also made several television and radio appearances, speaking about her mother’s battle with osteoporosis and her love of gardening and horse breeding.

Reports said she could soon take on a bigger role as one of the “counsellors of state”, a group of senior royals appointed to step in if the Queen cannot perform her official duties.

Speculation has mounted because the other counsellors alongside Charles and William — Prince Andrew and Harry — are no longer serving royals.

“The Queen may look to add the Duchess of Cornwall, who would become a counsellor of state when Charles is king anyway,” constitutional expert Craig Prescott from Bangor University told the Mail on Sunday. – AFP