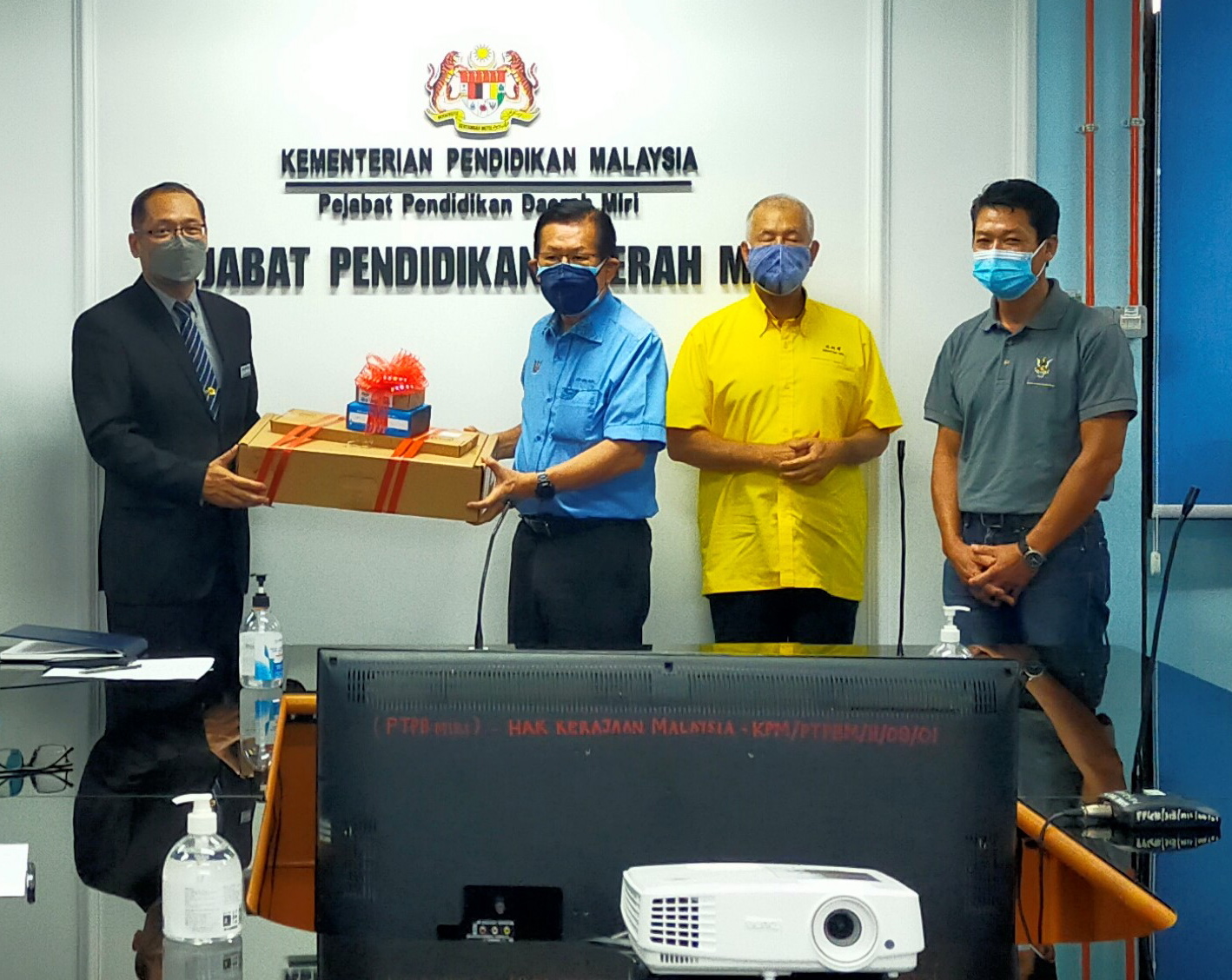 (From left) Muhammad Syahmi accepts a set of Raspberry Pi computer from Lee, witnessed by Ting and Kameri.

MIRI (Nov 13): The Raspberry Pi computer project run by the Sarawak government is now 100 per cent completed, with 577 units of devices having been distributed to primary schools under Miri District Education Office (PPD).

At the official handing-over ceremony yesterday, state Minister of Transport Dato Sri Lee Kim Shin expressed his hope for all the computers given to the schools would be fully utilised to improve the teaching and learning in class.

“I also hope that this programme would foster innovation and digital skills in the children,” he said at the event where Assistant Minister of Tourism, Arts and Culture Datuk Sebastian Ting, permanent secretary of Ministry of Education, Science and Technological Research (MESTR) Sarawak Datu Kameri Affandi and Miri PPD deputy officer Muhammad Syahmi Tan Abdullah were also present.

According to Lee, the Sarawak government, through MESTR, strives to equip all 1,265 primary schools in the state with basic computer facilities.

He said through this initiative, each school would be given between three and 25 units of Raspberry Pi computers, depending on the pupils population.

On the Raspberry Pi computer, Lee hailed its ‘Internet-in-a-box’ function as one of its advantages.

“This function allows students to access to learning content or materials pre-loaded in the device via an intranet network.

“This is especially useful for teachers to facilitate children’s learning in schools that do not have Internet access, as the ‘Pi’ would provide the experience of accessing the intranet, which is similar to accessing the Internet,” he said.

Lee added that Raspberry Pi should serve as the perfect platform for school-children to learn programming skills and to start setting up coding hardware projects.

He also said beginning next year, the MESTR would be providing more in-depth Raspberry Pi training for information communication technology (ICT) teachers from every school.

“The Sarawak government is very concerned about the quality of education in the state, which led to the establishment of MESTR in 2017.

“MESTR serves to complement and supplement the efforts of Ministry of Education Malaysia, especially in few keys areas such as promoting STEM (science, technology, engineering, and mathematics) and ICT education, improving English language proficiency as well as providing safe and conducive teaching and learning environment to our children,” he said.

Lee regarded early exposure to computers and ICT at as being ‘very important’ in enabling children to be proficient with computers, to be taught in computer-based technology and to be exposed to the digital world from a very young age.

“I’m glad that the federal government has announced an allocation of RM4 billion for Sarawak under the National Digital Network Plan (Jendela) to provide better and wider Internet coverage and facilities for Sarawak.

“We hope it could materialise soon so that our children and schools would not be left behind when it comes to online learning,” he said further.

Previous ArticleA bouquet for the A&E at SGH – A personal experience!
Next Article Foundation finally releases results of its 2019-2020 recycle programme