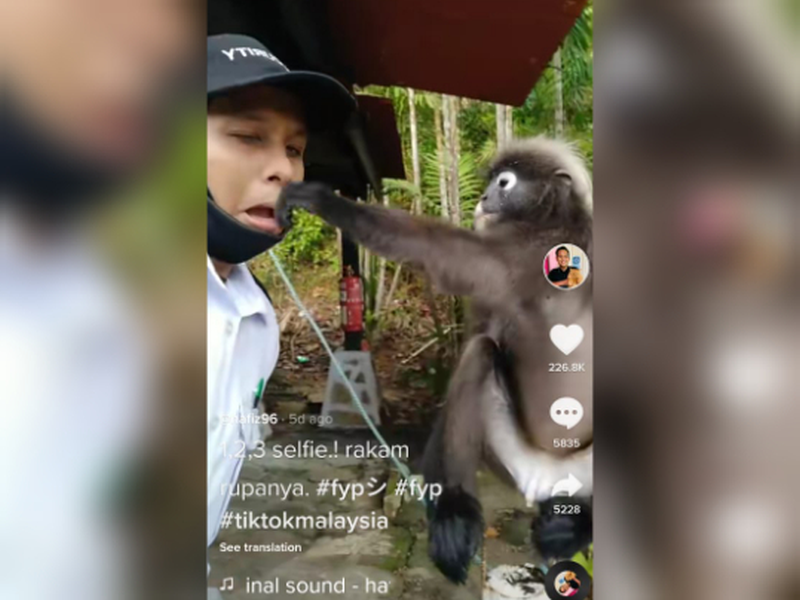 Hafiidz is highly sought after now thanks to Lisa the Dusky leaf monkey. — TikTok screencap

KUALA LUMPUR (Nov 12): A security guard at a resort in Langkawi, Kedah has become highly-sought after thanks to a playful Dusky leaf monkey.

Muhamad Hafiidz Hamzah said he did not expect the clip he shared of the primate, which he named Lisa, snatching his food would go viral.

“I was shocked when the video exploded. Many news pages reposted it.

“Even the Los Angeles and Singapore media wanted to buy the clip from me,” he told mStar.

Hafiidz said the video clip was taken from the recording of a closed circuit television camera.

“From the clip it looks natural and spontaneous. The fact is I am used to it,” he said.

The 25-year-old from Kuala Perlis said the monkey had been around the resort, Berjaya Langkawi Resort, since he started working there three years ago.

“They are tame. The resort area used to be their habitat. When the resort was built, they ran away from the area.”

“But when tourists started to feed them, they returned and stayed on.”

Hafiidz admitted when he first started working at the resort, he was shocked to see the primates’ presence.

“They can recognise people who love to feed them.”

Hafiidz said he and his colleagues fed the monkeys bread every morning as they wanted to avoid them from roaming at the resort’s restaurants.

“As for me, when it is time for me to eat, I will find a suitable place. If there are monkeys around, I need to hide to eat in peace.”

Hafiidz also said he had received requests for more clips of Lisa after the first clip went viral.

He has posted other clips on TikTok of the monkeys.

“This will have to depend on when I am available as I am working.”

Hafiidz said as a result of the first clip, the resort had gained popularity.

“Many came to visit and the first thing they asked when they saw me was am I the guard with the monkey. Even Shuib Sepahtu’s family and his personal assistant also approached me.” — Malay Mail

Previous ArticleWhy is road in Tinjar not repaired, maintained, asks PKR man
Next Article ‘An election no one asked for’: How political fatigue and Covid-19 could scuttle voter turnout in Melaka